Skip to content
Home
/
A 4 Day Journey from Iwate Prefecture to Hokkaido on the Hokkaido Shinkansen: Day One
Tweet

A Four Day Journey Along the Hokkaido Shinkansen

As you may know, the Rugby World Cup 2019, one of the three major sporting events in the world, is now being held in Japan. To commemorate Japan hosting the RWC 2019, this 4 day trip from Kamaishi city, Iwate to Sapporo was hastily arranged for me to experience. This route is completely different from Japan’s “Golden Route” between Tokyo and Kyoto/Osaka that so many first time tourists take. Along the way, I experienced the diversity of the region: the rugged beauty of its coastline, the extravagant variety of seafood, and the abundant outdoor activities. Most impressive however, were the people I met along the way, kind-hearted people with an inner strength, many committed to rebuilding areas heavily damaged by the 2011 tsunami disaster. Please follow along my journey to discover more about an incredible part of Japan most people completely miss out on.

Day One: Kamaishi city and the Recovery Memorial Stadium (this article)

Day One, Part 2: Cycling Kamaishi and the Sanriku Coastline

Day Three: 12 Hours in Hakodate and A Summer Splash in Niseko 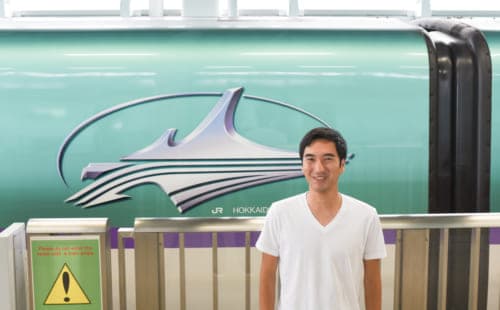 Day One: Kamaishi City and the Recovery Memorial Stadium 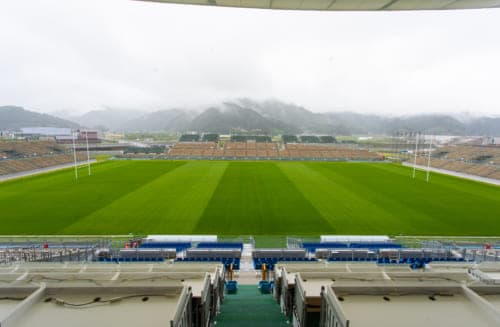 Along the beautiful Sanriku coastline of the Tohoku region is the small coastal city of Kamaishi in Iwate Prefecture.  With a population of less than 35,000, you might be surprised to hear that this small community is in overdrive as it prepares to become a major venue for one of the world’s most popular sporting events.

This is the 2019 Rugby World Cup, and Kamaishi City will be one of the 12 cities in Japan that will host games for the over 1.8 million potential ticket holders coming to see these games from around the world.

However, Kamaishi City is completely unlike any of the other host cities, which are all major metropolitan areas.  Preparing this small city for a global event has been a monumental initiative that has been nearly a decade in the making.  So why exactly has this city taken up such a challenge?

Bright and early on a mid-August morning, I boarded the Shinkansen from Tokyo Station towards Morioka city, Iwate (the starting point of my trip) to learn about the incredible story of this city and its people. 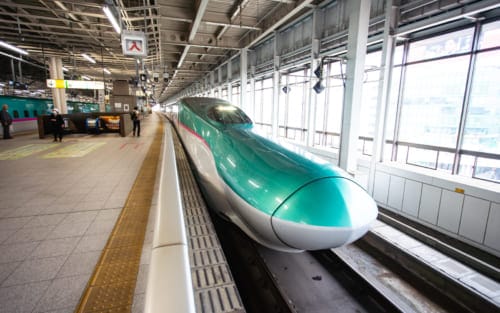 After arriving at Shinhanamaki Station in Iwate, I transferred to a local Japan Rail express train to Kamaishi Station where I awaited my next train to Unosumai Station. 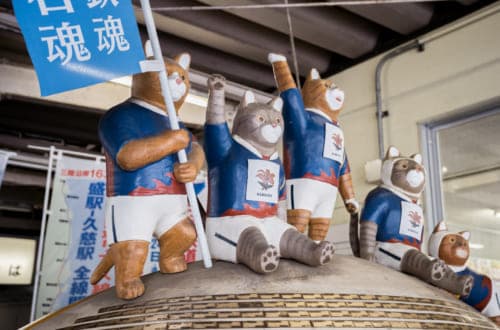 During this down time I visited a monument to the rugby heritage of Kamaishi City which once hosted one of the top rugby teams in Japan.  It was here that I learned that the railway between Kamaishi and Miyako that I was about to board had been out of commission for nearly a decade, ever since the devastating earthquake and tsunami that ravaged this part of Japan in 2011. 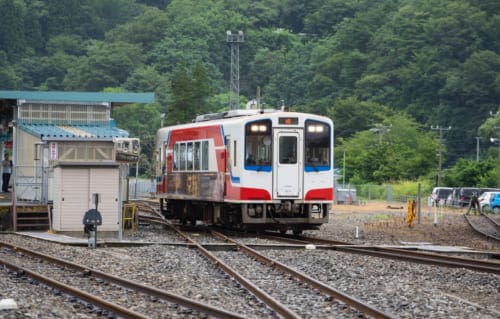 This train line was completely crippled by the disaster and it was only thanks to the support of the communities along this line that it was able to be restored to operation.  Boarding my train, I then traveled along the coastline through many beautiful coastal communities to the area where Kamaishi’s stadium was being built. 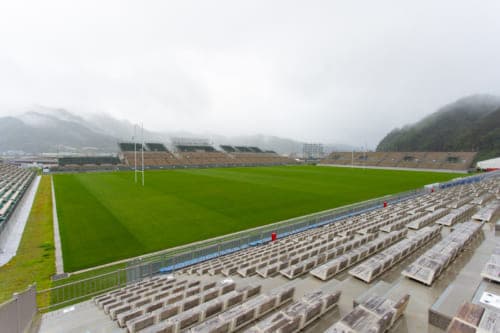 This stadium is called the Kamaishi Recovery Memorial Stadium and upon arriving at the construction site I met with Sasa Kazunori, the submanager of the stadium, who told me more about its history and significance to Kamaishi and the greater Sanriku Coastline.

Kamaishi City sustained incredible damage on March 11th, 2011.  On this day, massive waves slammed into this community and took the lives of over 1,000 people and destroyed most of the city along the coast.

This included the elementary school and middle school that once stood where this stadium was being constructed.

Mr. Kazunori explained that this stadium and the tens of thousands of visitors it will draw will bring much needed investment and attention to this area which still has a long path to recovery.

I had volunteered in this region 3 months after the tsunami hit and clearly understood the significance of this.  During my time in these hard hit communities, I learned that one of the greatest fears of the people here have is that they will be forgotten by the rest of Japan and will lose the support they need to get through the decades of reconstruction needed to get their communities back on their feet.

I had already experienced one of the first projects helped by this investment, the reconstructed Sanriku Railway Line.  Its completion was helped in large part by the Rugby World Cup.  The construction in this town was also incredible.  There were large trucks and construction cranes at every turn with crews working at full speed to finish the stadium in time for the games just a month away.  Once completed, Kamaishi Stadium will be able to hold over 16,000 people and will be accompanied by a large museum showcasing the story and recovery of this city.

The stadium itself looks out at the mountains and ocean and its construction features locally sourced cedar wood.  Kazunori further explained that this stadium will serve as a community sports and event space for the people of this region after the Rugby World Cup. 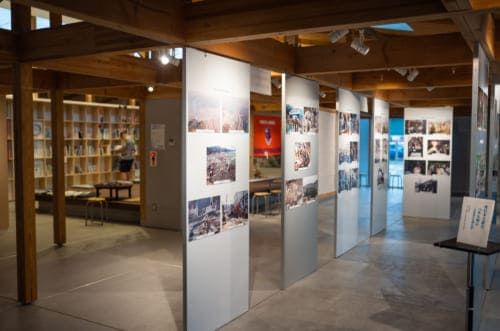 Following my visit to the stadium, I visited the Unosumai Memorial Hall near the station that preserves the stories of this city.  Here I met Gaku Fukuda, a local resident of Kamaishi who has dedicated himself to helping to his city recover and to help visitors to understand the story of Kamaishi. 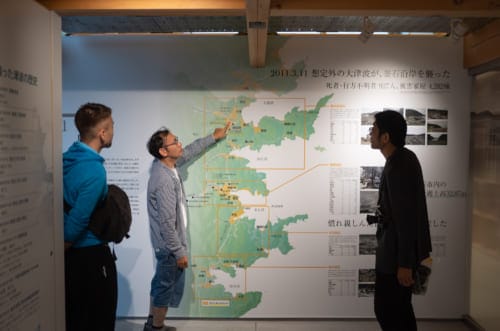 Mr. Fukuda explained that the coastline of this region is what is known as a rias-type coastline with high rocky cliffs that line most of the shoreline.  This geological feature had greatly amplified the destructive force of the tsunami waves as it caused the water to be funneled into the small open pockets of shoreline where many of the communities were located.

This resulted in waves of up to 23.6 meters (77 feet) to barrel into Kamaishi City and flow far inland.  There are many places in this city where the height of the tsunami is marked and I found it simply impossible to fathom how sea water could possibly reach such heights.

This was unfortunately the same for many of the residents who were here on that tragic day. Many lost their lives taking shelter in tall buildings that they believed would save them from the dark walls of water.

On that day over 1,000 people in this small community lost their lives and the city itself was virtually wiped off the map.

This unbearable agony brought the city of Kamaishi to its knees. 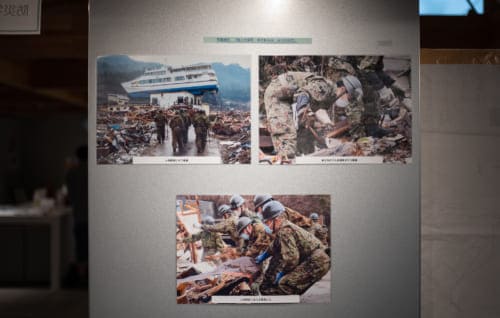 However, among all of these painful images and stories was a miracle.

Of the 600 elementary and middle school students at the Unosumai Elementary and Middle School, not a single student lost their lives during the disaster.  This was despite the monumental challenge of evacuating hundreds of small children across the city to the evacuation point in only a matter of minutes.

The reasons why the students were able to evacuate successfully was thanks to the courage and initiative of the students themselves.

The students of Kamaishi had been trained in tsunami evacuation and were aware of the evacuation route.   When the alarms blared through the city, they immediately jumped into action.  The middle school students of Unosumai took the hands of their younger elementary school peers and together they ran through the city to the evacuation point.  Indeed, the odds of every single one of these students making it to safety across town was simply a miracle and the story of survival of the youth of this city is what gave these people the hope they needed to rise up again.

The former Unosumai Elementary and Middle School is now the site of the Kamaishi Recovery Memorial Stadium and many of the students from 9 years ago will be at the stadium to celebrate the world cup.

If you are coming out to Japan to see the World Rugby Cup, I strongly encourage you to visit Kamaishi. It is a chance to see a world class sporting event while also being able to explore the serene beauty of the Japanese countryside along the Sanriku Coast. By simply coming to visit this city, you will be bringing much needed hope and encouragement to the truly remarkable people of Kamaishi City.

I will be going into detail more about the beauty of this region in my next article.