The enduring culture found in every temple and museum radiates from the city center to all of its surrounding areas, even Yamashina, a district of Kyoto which many visitors have never even heard of. This is rather surprising because Yamashina is located so close to Kyoto, sandwiched between Lake Biwa and Higashiyama, the eastern mountains of Kyoto’s three sided valley. This separation by mountains may account for the lack of tourism Yamashina receives; however, this makes a trip to Yamashina all the more interesting, as the numerous temples and cultural assets appear as little treasures whose beauty has yet to be discovered by the eyes of many. One of the treasures among treasures is Bishamondo. 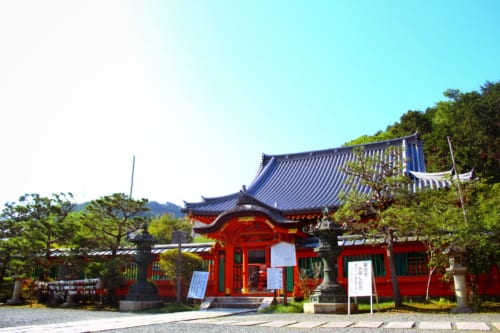 Were one to search for Bishamondo on a map, one would find it in the northern part of the district, where further north there are only mountains and dense forests. As I began my journey by starting from Yamashina station and making my way towards the temple, I began to imagine Bishamondo as a kind of guardian who keeps watch over the district by the advantage of its elevated position in the north. Yamashina station is only a 5 minute ride from Kyoto station and Bishamondo is a 15 minute walk from there, making this lovely temple easily accessible from the city center. 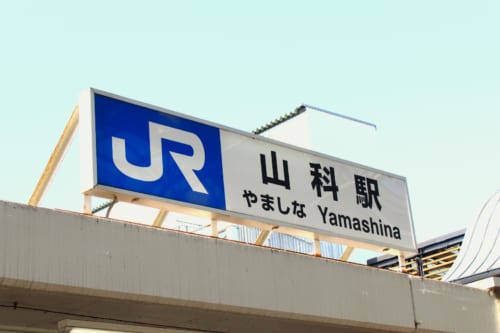 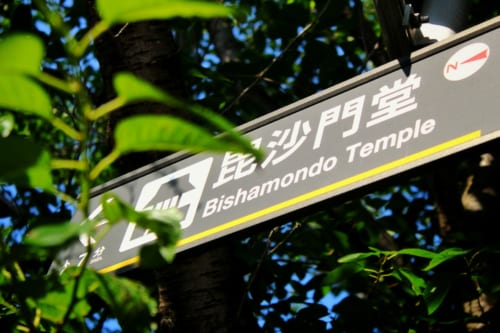 Walking to the temple is incredibly easy by just following the street signs provided to visitors in English and Japanese. 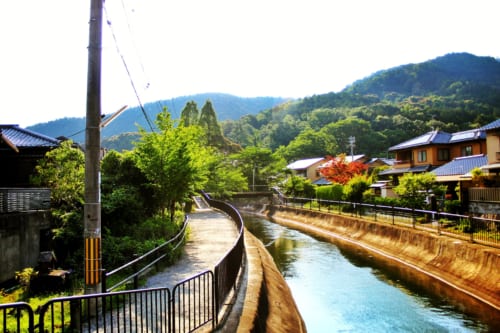 Walking toward the temple, you will soon find yourself crossing a bridge that intersects with the Lake Biwa Canal. This picturesque canal flows through the beautiful Hishiyama Nature Park, which is perhaps a walk we can take another day. 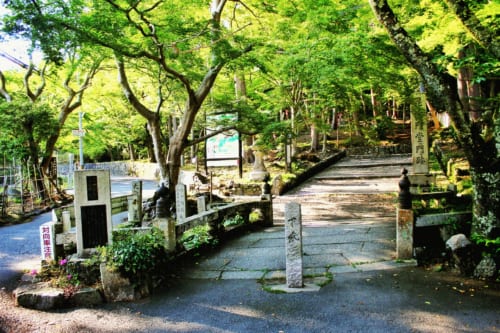 Just beyond the bridge, we reach our destination. Bishamondo temple invites us to the tranquility and beauty that lay beyond this small, modest entrance, the little bridge and the surrounding stone pillars. By this point, only little is revealed of what awaits the curious eye amidst the lush green. 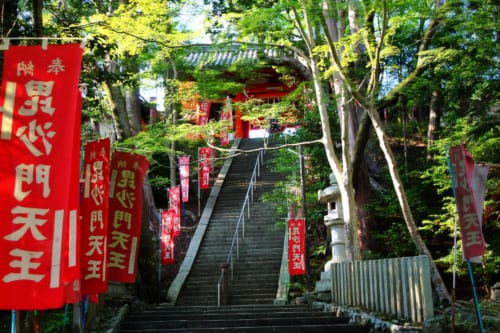 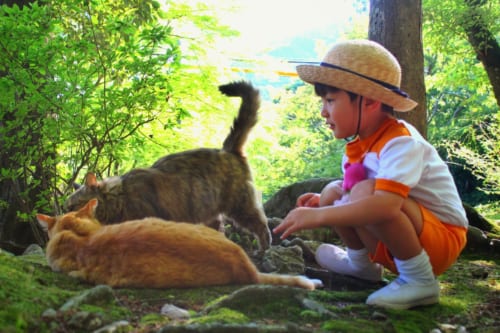 Beyond this entrance, a path leads us further under the leafy canopy and the path becomes more steep as we approach a flight of stone stairs. These stairs are adorned on both sides by red flags bearing the name of the deity to whom the temple has been dedicated to, Bishamonten (毘沙門天), one of the seven gods of luck. And if some of that luck happens to rub off on you, you may be greeted by some feline friends before continuing your ascent. This encounter was bestowed upon me and a fellow visitor and I like to regard it as a good omen.

Ascending to the temple grounds

After climbing the stone steps, you will find yourself at the main entrance gate of Bishamondo temple, which is called Mon in Japanese. The rich red hue of the gate contrasting with the lush green foliage is a truly overwhelming sight. 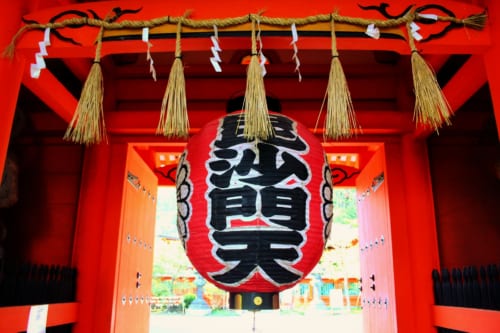 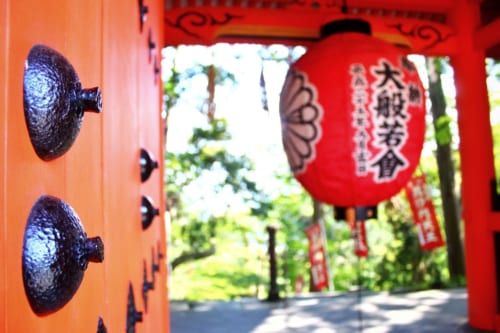 A large red lantern, called Chōchin, hangs in the gate. The name of Bishamonten is imprinted on the enormous lantern, alongside the emblem of the Japanese emperor. Without question, the Chōchin is one of the many beauties of Bishamondo Temple – already greeting visitors at the entrance gate! 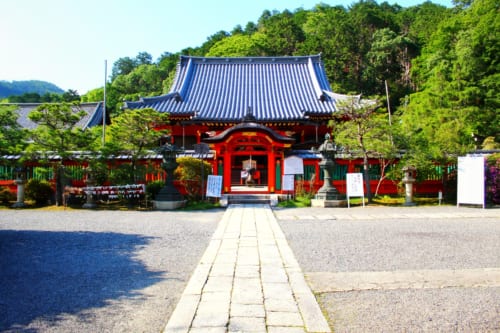 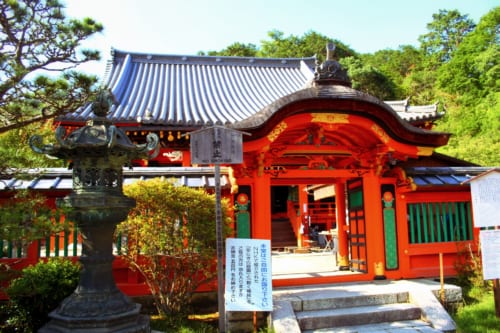 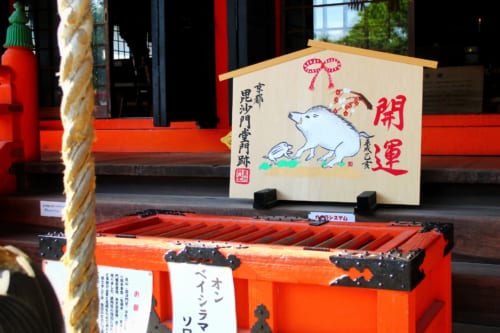 The highlight of Bishamondo is the main temple area located within the rich green of the surrounding forest. Bishamondo appears like an oasis of peace and tranquility, the atmosphere expressed in the silence surrounding you as you enter the area. The main building (Butsuden), which is located directly opposite the entrance gate, appears incredibly inviting at first glance. There’s another smaller gate welcoming visitors and an offertory box which signifies a prayer spot. Because 2019 is known as the Year of the Boar, according to the Chinese Calendar, a wooden board has been erected in honor of the zodiac sign. Let’s pray for good luck and see what the rest of the temple has to offer! 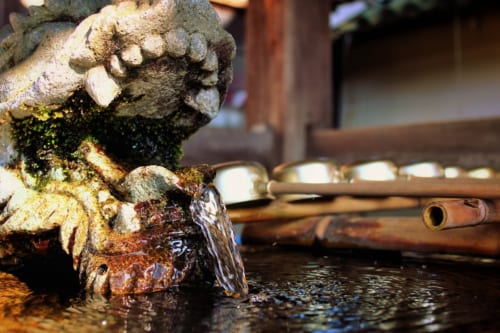 Even though Bishamondo was constructed by the Buddhist Tendai sect, a Chōzuya (fountain for purification) can be found near the main gate. Usually, these cleansing fountains are found at Shintō shrines, but they are also present at some Buddhist temples, such as Bishamondo. Visitors of the temple are encouraged to cleanse their hands, arms and mouth before proceeding further into the temple area. This process is a sign of cleanliness and respect towards the deity to whom the temple or shrine is dedicated. 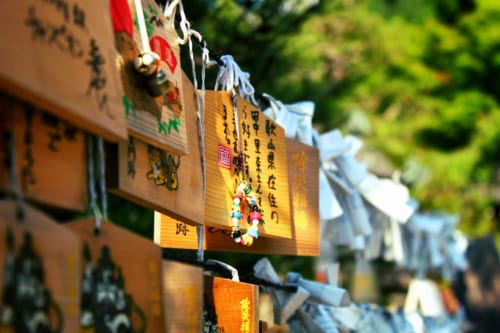 Next to the entrance gate, which leads to the main building, small wooden boards referred to as ema are hung. These have been affectionately inscribed with the wishes and aspirations of temple visitors as prayers for them to come true. Next to these ema, long rows of knotted paper can also be found. These are fortune-telling paper slips called omikuji, left behind by visitors who didn’t want the bad fortunes of the omikuji to follow them home. 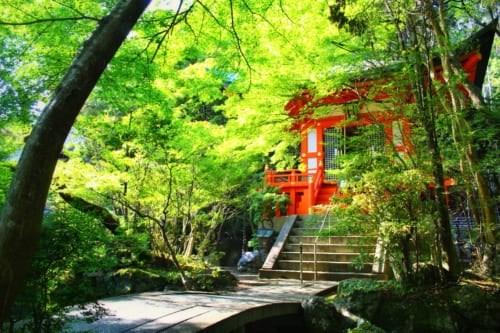 Smaller shrines lay slightly hidden around Bishamondo’s main building. Surrounded by lush green foliage, each of them seems to exist in their own little wonderous world.

A trip to Bishamondo is a visit to one of the most beautiful locations found in Kyoto’s surrounding districts. Bishamondo may be minutes from central Kyoto, but in terms of feeling, it is far away, as untouched and isolated as the deepest parts of Japan.