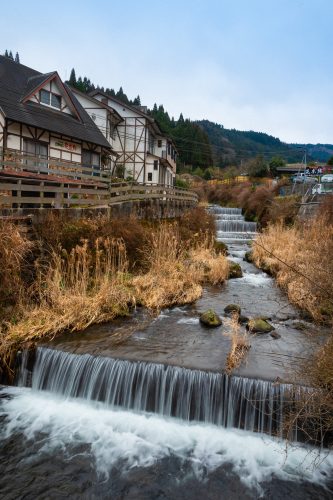 As we approached the main street of Yunohira Onsen, I was a bit surprised. Thirty minutes earlier, I had been in Yufuin, one of the most popular hot springs towns in Oita Prefecture. With its trendy shops and restaurants and upscale ryokan, Yufuin is filled with tourists year-round, but here in nearby Yunohira Onsen, a solitary couple walked arm-in-arm down the main cobblestone street. This too was a lovely little town filled with onsen, but where were the people? 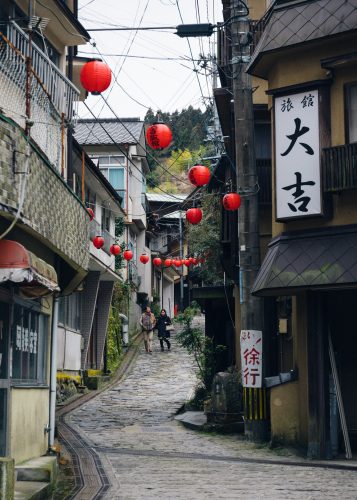 For most of the 20th century and for centuries before that, the roles of Yufuin and Yunohira had been reversed. Established 800 years ago as a location for bathing, mainly for the medicinal qualities of the hot springs waters, Yunohira Onsen became a sort of resort area for the wealthy during the Edo period starting in the late 1600s. When the feudal system came to an end, Yunohira’s famous onsen became accessible to the middle class and its popularity soared. Though it was ravaged by fire in 1912, the buildings were quickly  rebuilt and business was thriving again within a few years. It remained the most popular resort town in the area until the 1970’s when Yufuin began an aggressive reinvention of its image through its sponsorship of a film festival, music festival, and some high profile competitions and eventually surpassed Yunohira as the trendy hot springs town of central Oita. 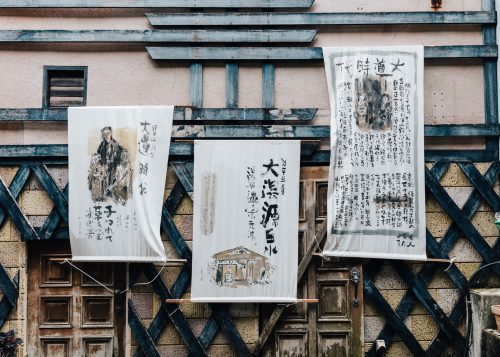 The lack of tourists on this cold February day belies the fact that Yunohira is an absolute charmer. A briskly flowing stream slices through a ravine, along which over twenty ryokan still operate, with lovely views of the natural surroundings and of course their own private onsen. During the day, strings of red lanterns line the narrow main street, at night bathing everything in a warm nostalgic glow. Cute shops and restaurants inhabit the Showa era buildings that are elsewhere quickly disappearing from modern Japan. 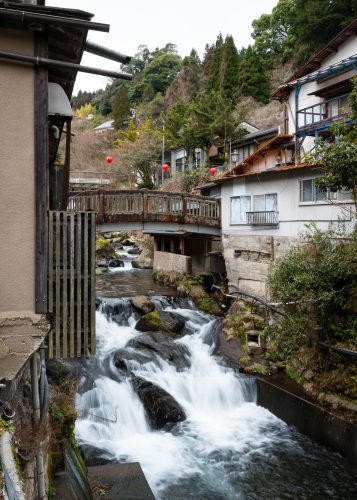 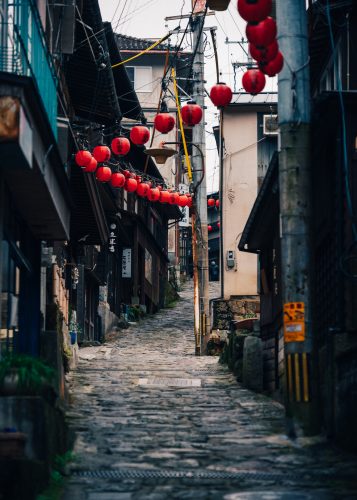 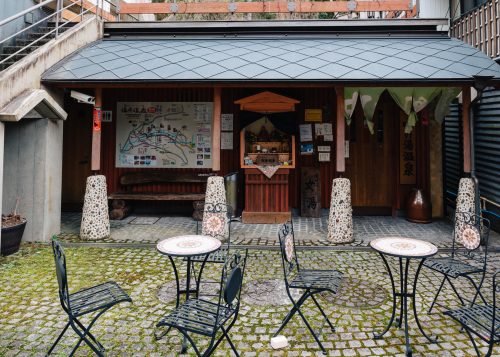 The parking lot of Yunohira Onsen is at the bottom of the ravine and your walk takes you up a slight incline to the top of the town. Along the way, you cross a bridge to switch sides along the ravine, though there are several smaller foot bridges you can take that lead to some of the ryokan or public onsen. Yes, one of the interesting features of Yunohira are the five public baths, which for many years were free to use, but now require a very modest fee of 200 yen which helps pay to maintain them. During my visit in the heart of the off-season, most of the public baths were actually undergoing maintenance, drained of their water but open to look around. I checked out Sunayu, the third of the five baths, which literally sits on the bank of the river. The bath itself is lower than the level of the river, so sand would sometimes get into the bath, hence it’s name, meaning “Sand Bath”. Most of the public baths are gender separated but one, Nakanoyu, has only one bath and is designated to each gender on even or odd days of the month. 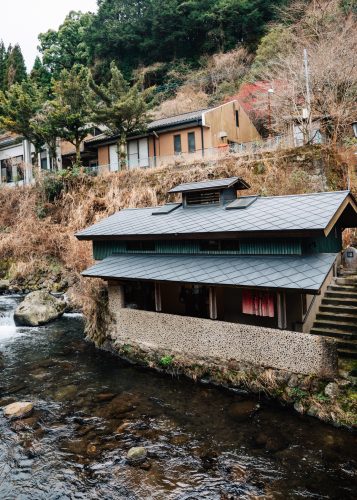 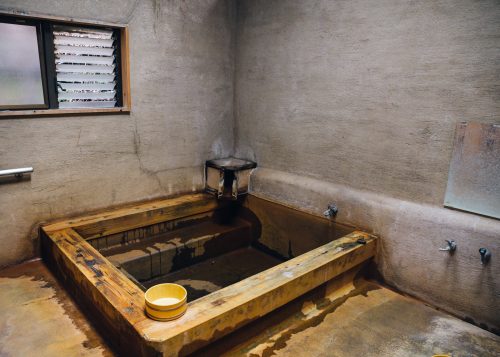 Since the public baths were closed and there was no way I was leaving this delightful little town without relaxing in an onsen, I decided to use a private bath at one of the ryokan. I chose Ryokan Shimizu which is known for its indoor onsen enclosed in a cave. I paid the 500 yen fee at the reception area and found no one else was using the bath at that time, which meant I could snap a few photos inside. 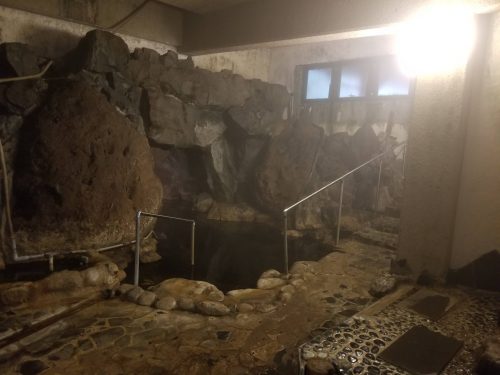 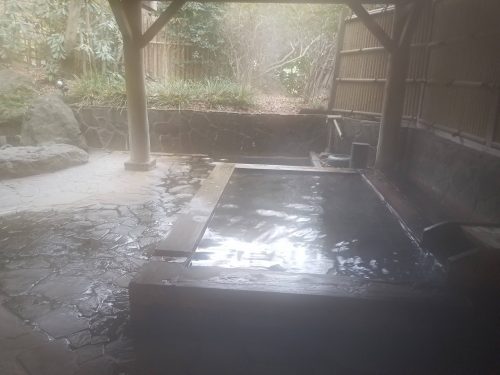 Besides the cave, which created a refreshing sauna like environment, there was an outdoor bath, which did not present a temptation to me on a day that was a brisk -1 degrees C.

Ryokan Shimizu also has a nostalgic looking cafe that would have been a great place to relax after my bath, but my host was waiting in the car for me outside, so it would have to wait for another trip. 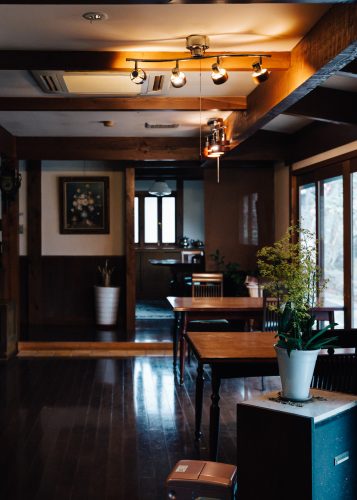 The easiest way to access Yunohira Onsen is by car; in fact, many of the sites around Yufu city are most convenient to access if you can drive yourself. Rental car facilities are available at any of the airports or major train stations in Oita or surrounding prefectures. If you do come by train, you may need to reserve a taxi in advance to pick you up from Yunohira station. Information is on the Yunohira webpage in Japanese but you can use Google Translate. 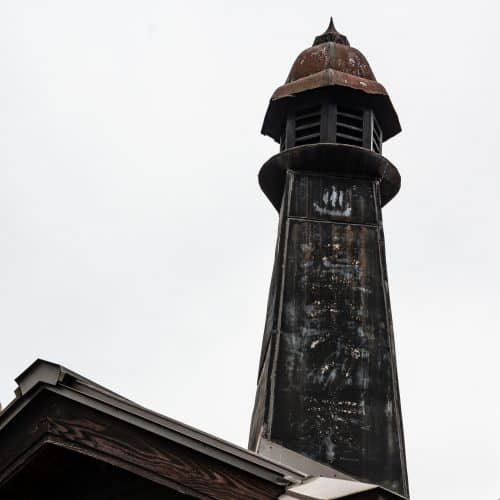 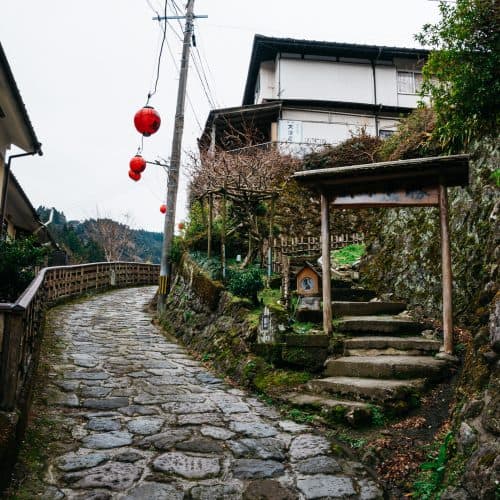