February is a bit of an odd time for a farm stay in Oita Prefecture. According to my host, Shiga Kazuhiro, farmers are doing two things in February: soaking in onsen and drinking sake. But this retired postal officer turned farmer was doing neither; instead, he was entertaining a guest from Tokyo who showed up at his home in rural Kyushu in the off season. Yet Kazuhiro-san was full of smiles and enthusiasm even as he searched for the right words in English using his trusty iPad. 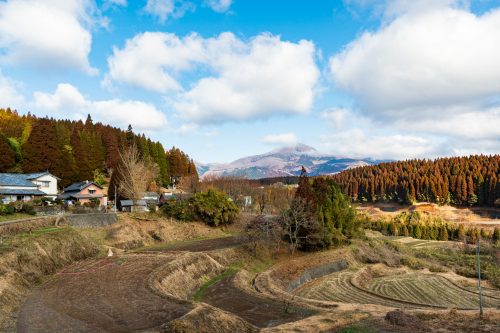 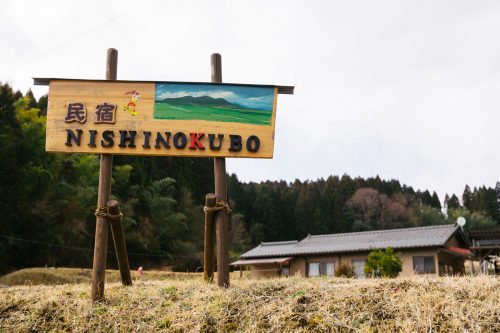 Kazuhiro and his wife Yukimi run Nishinokubo, a farm stay tucked away from the prefectural highway accessed by a road so narrow, even the non-religious will pray nobody is coming in the opposite direction. Though Nishinokubo has only been open as a farm stay for about a year, it was a dream Yukimi-san had for much longer. In 2014 she traveled to America and Canada as part of the Friendship Force program, where she met lifelong friends as she participated in homestays. Yukimi-san desired to bring people from all over the world into her home in Oita Prefecture to introduce them to the culture of Japan and especially the renowned beauty and hospitality of Oita. Many of Nishinokubo’s guests have been students of nearby Asia Pacific University which attracts students from all over the world. 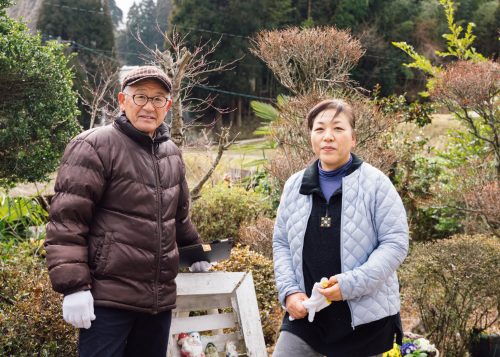 Enjoying the Fruits of Your Farm Stay Harvest

On a typical farm stay, if there is such a thing, visitors might participate in some light farm work like planting rice or harvesting fruits and vegetables. The reward of their labor would be a huge home cooked meal made by Yukimi and Kazuhiro, often from the very produce they harvested from the fields. While Yukimi-san handles the main dishes, Kazuhiro-san’s specialties are the preserved and dried foods like umeboshi (salted plum) and tsukemono (pickles), which Yukimi-san says she cannot replicate with the level of skills he possesses. 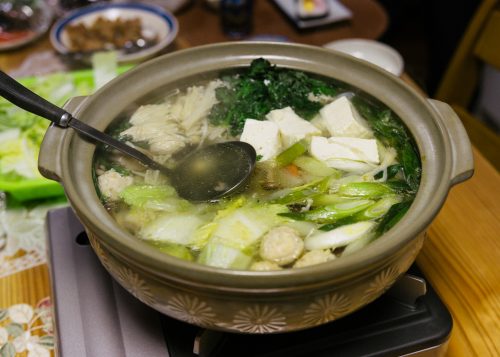 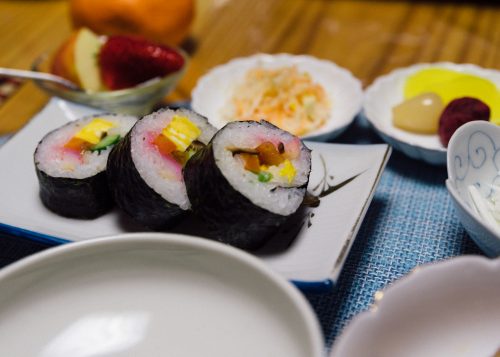 During my stay in an especially chilly period, Yukimi-san prepared a huge nabe, a hot pot with many local Oita products including chicken and shiitake mushrooms, two products that Oita exports to the rest of the country. Alongside the main dish were makizushi rolls made with rice harvested from their own fields, some of Kazuhiro-san’s famous tsukemono and umeboshi, and a small plate of sweet fruit. The next morning, I found a hearty Japanese style breakfast waiting for me with a filet of broiled salmon, seasoned egg, yogurt, more delicious shiitake, fruit, and my favorite style of miso soup overflowing with asari (clams). 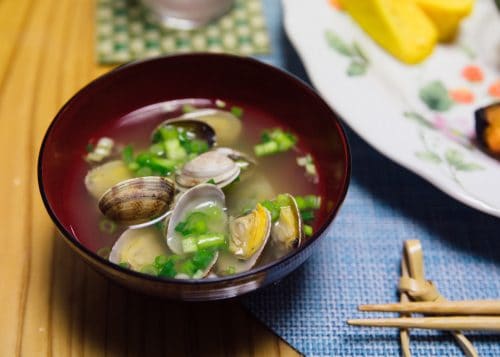 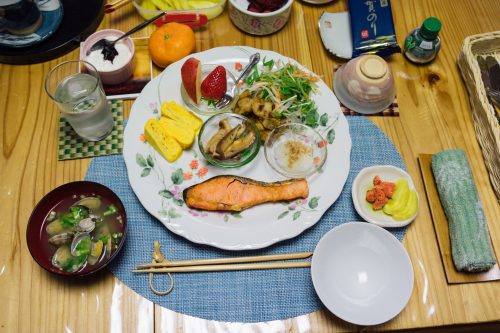 The term “typical farm stay” can mean a lot of things to the Shiga-san. Over the New Year’s holiday, typically a family oriented occasion for the Japanese,  a family from Singapore came to stay at Nishinokubo. Yukimi-san included them in their celebration, making the complex New Year’s special meal, osechi-ryori, for them and her family to share. For their Singaporean guests, it was like being adopted into a Japanese family, a truly unique experience for any visitors to Japan.

And so it was with me, with the majority of my time at Nishinokubo spent around the dining table, eating what seemed like an endless amount of food, drinking tea, beer, and Kazuhiro-san’s home brewed ume-shu (plum wine), and talking about…everything. Shiga-san have a deep knowledge of the history of Taketa City and Oita Prefecture and were happy to help educate me. But they are equally happy to share about their children and grandchildren, talk about their hopes and dreams, and really just treat their guests as members of their extended family.

As I have quite the obsession with learning about the local cuisine of the different prefectures of Japan, much of our conversation revolved around food, particularly the foods of Oita or the island of Kyushu. Our discussions often led to demonstrations, such as Yukimi-san’s demonstration of how to make yaseuma, a snack unique to Oita made with thick boiled noodles coated in kinako (roasted soy bean) powder, sugar and a little salt. 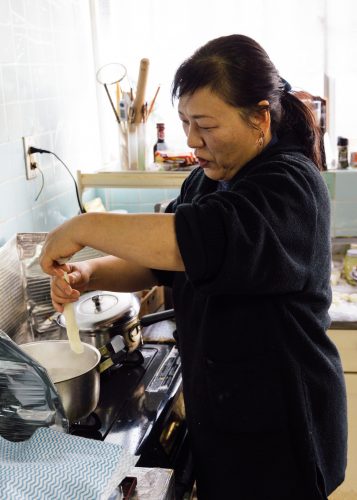 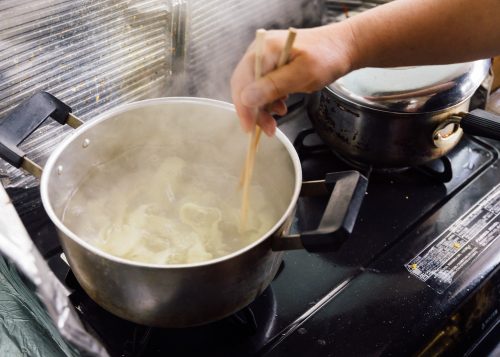 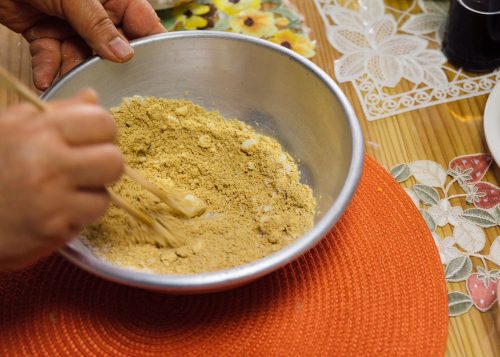 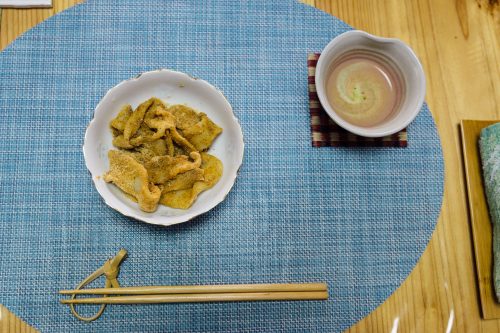 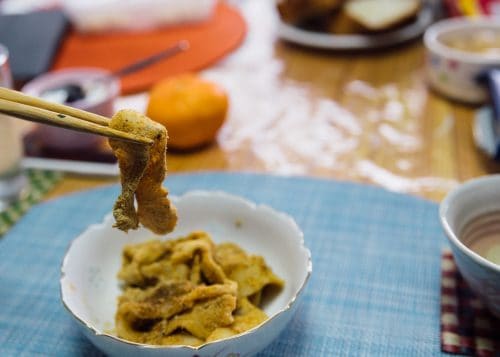 Kazuhiro-san showed me how to make kakimochi, a rice cracker similar to sembei but prepared in a different way. After drying a slab of pounded rice, Kazuhiro carefully shaves off layers, cutting them into rectangles and laying them out in a basket to dry further. After they are completely dry, they can be stored for months, even years, and prepared to eat by baking or frying. The longevity of this snack without the use of preservatives made it an important way to store food in ancient Japan. 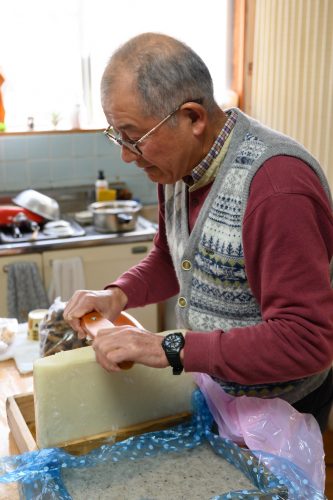 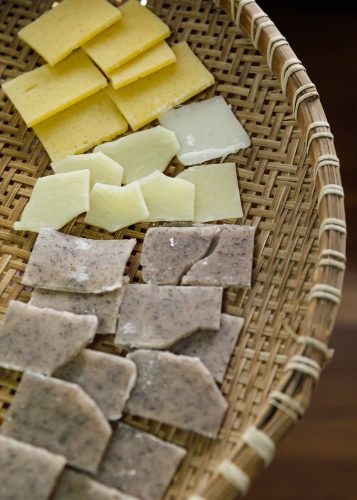 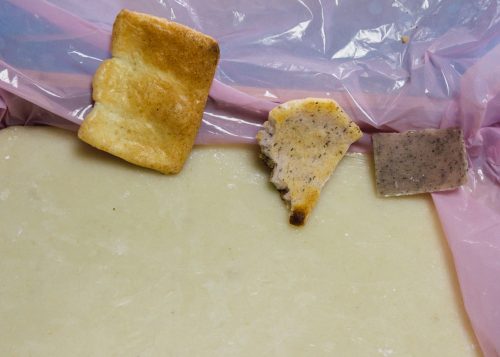 The Search for Shiitake

One of the many things my hosts explained to me is that Oita Prefecture is Japan’s leading producer of shiitake mushrooms. These meaty, mild tasting mushrooms are prized worldwide for their flavor and versatility in cuisine. While other countries might be producing shiitake in greater quantity, Oita prides itself on the quality of its product, which can take up to two years to grow.

In a forest nearby, Kazuhiro-san showed me the process for growing shiitake. A specific type of tree which shiitake is fond of growing on is cut into meter long logs and left to dry for a year before seedlings are planted on them in small holes bored into the bark. The logs are then arranged in the shade of the forest and left for up to two years while the mushrooms grow to full size. Every five years, the entire batch of logs needs to be replaced by the mushroom farmers, making this type of work extremely hard and labor intensive. Weather plays an important factor in production as well as we were surprised to find few mushrooms due to the lack of rain in the Kyushu area this winter. 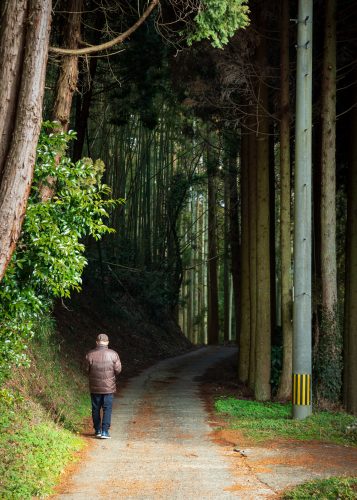 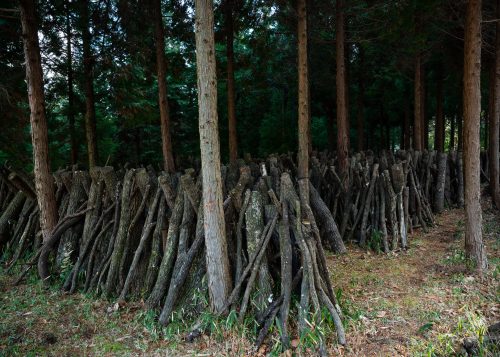 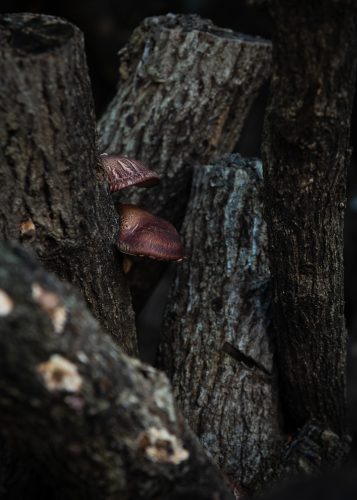 Returning to Nishinokubo, we greeted the neighbors, to whom I was enthusiastically introduced as if I were an old family friend. There was even a round of photo taking with these people whom I had just met!

You can stay at the finest hotel in Japan, even in the world, and at the end of your stay, you would still be unlikely to come away what every guest at Nishinokubo does: an enduring friendship. This is part of the charm of a farm stay, the relationship you create by sharing meals and stories with the owners, sometimes working side-by-side with them, but mostly just enjoying each other’s company. It is a friendship, not a business transaction, and it is one of those Japan experiences that will remain in your heart forever.

Nishinokubo is located in the southwest quadrant of Oita Prefecture, slightly closer to Kumamoto Airport than Oita Airport, but either will work if you choose to rent a car. Hiring a car is really the best way to see Oita Prefecture with its spectacular scenery and renowned onsen hot springs resorts. If you take a train, get off JR Bungotaketa Station so that the host will pick you up. Nishinokubo is conveniently located within an hour of Yufu city’s plentiful hot springs and gorgeous natural landscapes and 20 minutes from the historic castle town of Taketa with its enormous ruins of Oka Castle to explore.