Buddhism has existed for millennia. Its tenets have traveled far: from India through to Southeast Asia and the islands of Australasia, and north and east through Pakistan and out through China into Japan. Along the way and over the years, cross-cultural contemporaries altered the forms of scripture and sculpture.

Just as much as the sutras, sculptures were adopted in different favor among the dharma-diffused domains. The variation between the Buddha statues of Buddhist countries are prime examples of this. The most commonly observed buddha pose is the meditative state – the so-called sitting pose. But, it so happens that replicas of this infamous figure throughout the Buddhist world include three poses – sitting, standing, and reclining. Although the reclining is a rarity in Japan, it can still be found!

Unbeknownst to most, Nagasaki prefecture’s Shimabara city has its own reclining Buddha. The pose portrays Buddha at the paranirvana point, when he had his final worldly death. Whilst laying down at Kotoji Temple, this Buddha appears to gaze lackadaisically away from Mount Bizan and out into an indistinctive mass of buildings. Clearly physical presence isn’t the main concern with this Buddha.

How Does Kotoji’s Buddha Compare to Others?

In Bangkok, Thailand, a 46-meter long reclining Buddha rests in heavy-eyed euphoria at Wat Pho Temple. This Buddha is gold-copper alloy, and his fiery red residence was the first royally recognized temple in Thailand. However, despite Wat Pho’s royal connections, Nanzoin Temple’s reclining buddha is no less impressive. Also situated along a pilgrimage route, at 41-meters long, Nanzoin’s reclining buddha it is the largest bronze statue in the world. Meanwhile, Kotoji Temple’s Buddha is among hushed hedges, a wave among a sea of grey grave markers, which altogether seem sightless and soundless below Shimabara’s green volcanic mountain. 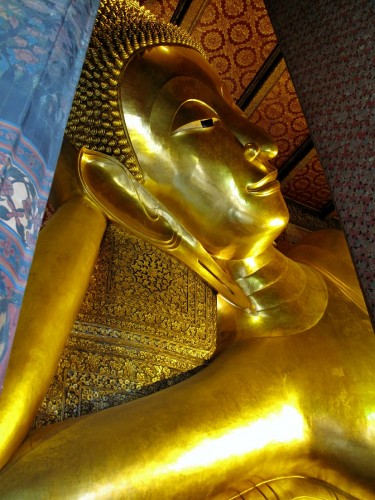 Being situated above a mountain of graves might be the most significant quality of the Shimabara reclining Buddha. Because, as Buddha laid his head down before passing, he left an enlightened earthly presence. Although built in 1957, the statue’s temple has history stretching back longer than the length of his Fukuoka companion’s leg. In fact, this temple commemorates the general who suppressed the Shimabara Christian rebellion. Although suppressing a rebellion may sound noble on the surface, it wasn’t. This actually involved killing 39,000 Christians. This quiet Buddha seems shrunken from the rest of the temple in the irony of such idolized suffering. This makes him all the more the Buddha. The thousands slain fixed a strain on his absence, and his 8.1-meter likeness at Shimabara was fittingly laid.

From JR Nagasaki Station, take the JR Nagasaki line to Isahaya Station.  This takes 15 minutes and costs 1000 yen by limited express, or alternatively 460 yen and 30 minutes by local train.

Change railways at Isahaya Station to the the Shimabara railway, and disembark at Shimabara Station. This takes 70 minutes and costs 1430 yen.