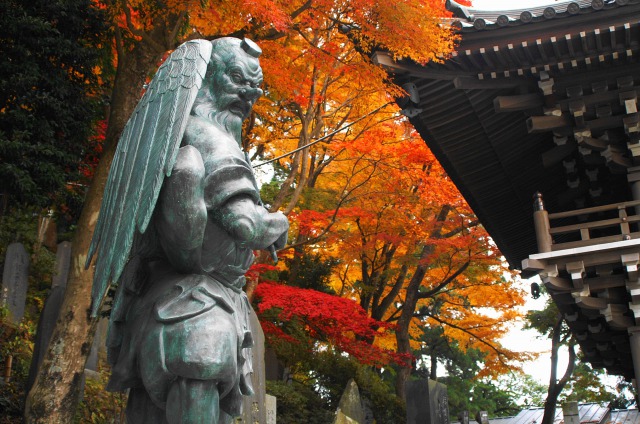 Top 5 destinations for the best Autumn leaves in Japan!

Like vibrant paintbrushes on an otherwise dull, green canvas, the reds, oranges and yellows of autumn are sweeping their colours across the landscape, creating one of the most spectacular displays of nature available to the masses. And while you only have to take a walk pretty much anywhere in Japan to witness the changing of the seasons, there are a few spots where the views are second to none. So rush in the car, take the train or even ride a bike to our top five scenic spots before the end of this cruelly short season. 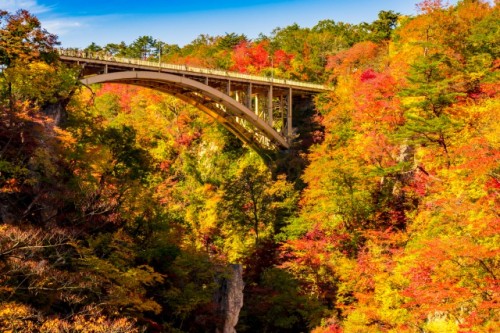 Dubbed one of Tohoku’s most scenic gorges, Narukokyo is not only a masterpiece of terrific autumn colours, but is also conveniently located only two kilometers from Naruko Onsen, a small hot spring town. The spot becomes increasingly popular every year around late October to early November as people gather to catch a peek of the autumn blooms.

Narukokyo rest house, towards the western end of the two kilometer long gorge, holds the best observation point for this miraculous season. Witness Ofukazawa bridge peeking through the tufts of fiery colours in the distance and capture some amazing autumn pictures.

With some free parking spaces along the main road, you can view all of this for free. There is also a large car park closer to the rest house if necessary. Alternatively, you can take the JR Rikuu line to either Nakayamadaira onsen (about 2km from the gorge’s western end) or Naruko onsen (2km from the eastern end), depending on which route you’d like to take. Both routes take around 30 minutes each, but Nakayamadaira is closer to the main observation points.

Buses also operate from both stations from early October to mid November, taking about 10 minutes (¥210). There are 6 – 7 departures each way per day but I would highly recommend the walk as there is nothing quite like immersing yourself in nature and working towards one final, spectacular view. 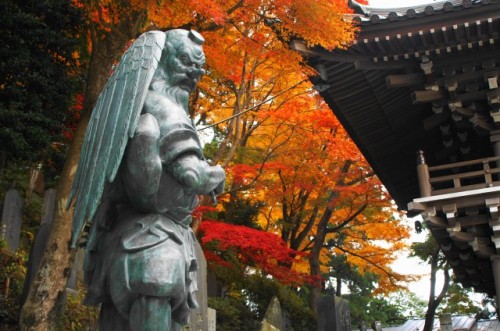 Mount Takao is a wildly popular destination for those eager to get away from the manic hubbub of Tokyo life. And while it may be fairly commercialised now, the view of the neighbouring mountains and, if you’re lucky, the heavenly, white glow of mount Fuji is still one of my favourites. Combine these spectacular views with the bursting colours of the autumn season, and it is fairly obvious why this spot makes our top 5.
Mount Takao offers various routes to explore, a temple, monkeys and even waterfalls if you can find them. The summit is 599 meters high and, using the simplest and most direct route, would take about 90 minutes to complete, or 45 minutes if you use the cable car.

It goes without saying that Mount Takao will be awash with Tokyoites in their walking boots, particularly in late November. So, try to get there on a weekday to avoid the crowds.

The easiest, cheapest and fastest way to Mount Takao is via the Keio line. The semi-limited express train will take you all the way to Takaosanguchi station (the base of the mountain) in 50 minutes from Shinjuku station (¥390), leaving every 20 minutes. Alternatively, you can take the JR chuo line from Shinjuku (40mins, ¥550), change to the Keio line at Takao station and ride one more station to Takaosanguchi (3 mins, ¥130). 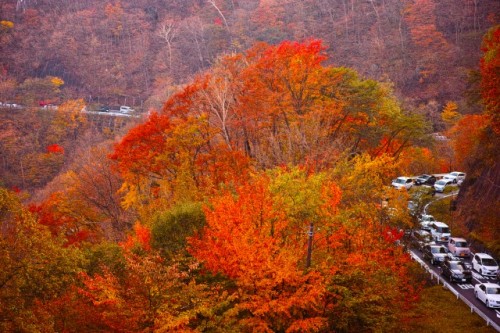 We’ve seen bridges and temples in and amongst the glorious autumn foliage but never before have I seen something like this. A sloped and winding road, featuring 48 hairpin turns and stretched off into the distance, carving itself into the landscape like a child’s doodle, and shrouded by a whole spectrum of autumn colours.

The view actually features two roads; one designated for vehicles going up and one for those going down. Traffic along these roads from late October to early November can be particularly gruelling, resulting in major delays and panic attacks if you think you might be running out of petrol. So, try to avoid going on weekends and national holidays, and maybe get up a few hours earlier because this view is not something you want to miss.

Take a bus bound for Chuzenjiko onsen or Yumoto onsen from the JR or Tobu Nikko station to Akechidaira bus stop, where the obervation deck, Akechidaira plateau, is based. The bus should take around 35 minutes and costs ¥1100, one way. But be aware that buses going in the opposite direction will not stop at Akechidaira since they use a different road. 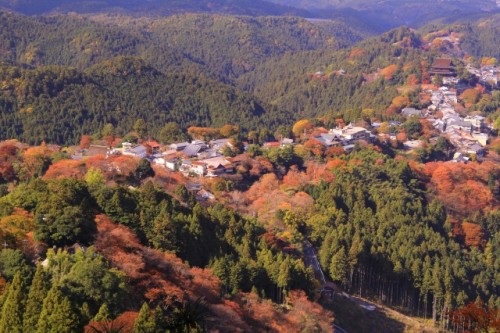 With over 30,000 trees, Mount Yoshino is renowned as being one of the most specular cherry blossom (sakura) viewing points in the whole of Japan but that’s not all the nature this world heritage sight can offer us. Intertwined with its quiet, quaint village, local souvenir shops, restaurants, hotels and famous temples are masses of glorious Japanese maple trees, from the new to the incredibly old. These trees have the miraculous ability to be more than one colour at a time, creating a gradient of autumn colours that could almost be likened to the wonders of a rainbow. So if you want to escape the crowds of Kyoto, go to Mount Yoshino, which offers all the same fantastic scenery in a more peaceful, serine and less commercialised setting.

The mountain can be accessed by a cable car near Yoshino station at the base of the mountain and travels to the lower part of the quaint town in mount Yoshino. The views from the cable car alone are worth the deviation from Kyoto and seeing the clouds beneath you from the small mountain town is quite simply the icing on the cake. 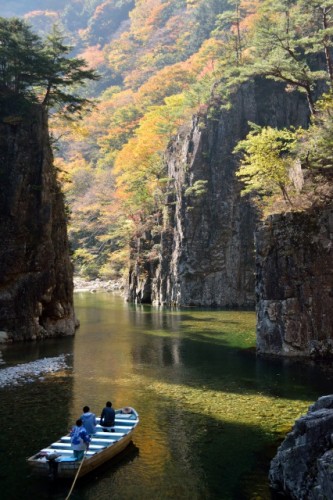 It is rare to find a ravine of a similar quality and beauty as the one in Sandankyo gorge. Allegedly Japan’s number 1 ravine and home to Miyajima, a world heritage sight, the area attracts many visitors coming far and wide to witness the best of Japanese nature. With its rapid currents, glistening pools, colossal rock walls and cascading water falls, it is a national scenic beauty that offers far more than spectacular autumn colours. It is a place to explore, a place to hear trickling water and a place to relax.

Sandankyo gorge can be reached in 75 minutes from Hiroshima city. Take City train number 1, 2 or 6 from Hiroshima station to Kamiyacho Higashi stop. Walk 3 minutes to hiroshima bus centre and get on the 8:18am bus bound for Sandan-kyo gorge (¥1,400) and get off at the last stop at around 9:33am). This is the only rapid service in the morning, so make sure not to miss it.
Coming from England, where the trees tend to turn from green to a dismal brown, I was stunned to see the fiery oranges, bold reds and bursting colours of the autumn trees in Japan. I had thought that scenes such as these existed only in pictures, helped along with some trickery in photoshop. But, such places really do exist! So be sure to make the most of this spectacular, yet cruelly short season.