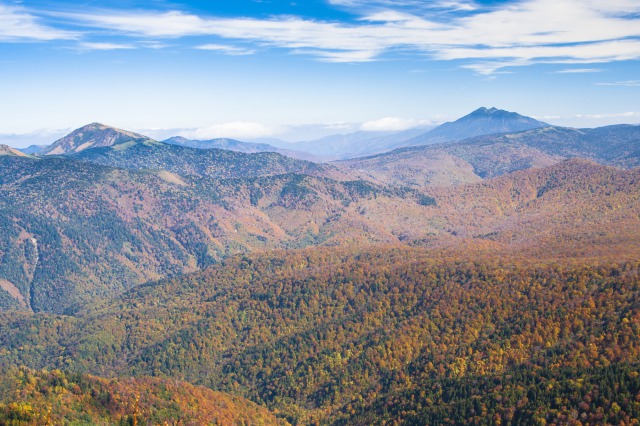 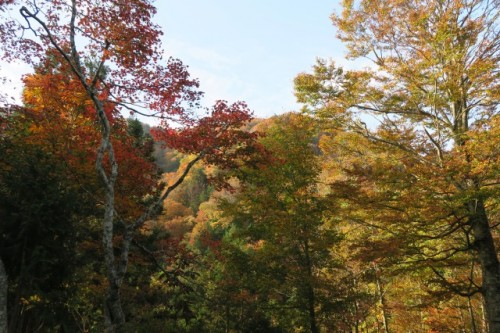 Be prepared for a mountain that not only takes you on one heck of an emotional roller coaster, but also slightly resembles one. There is no question that my time on Mount Hotaka will be one I will remember for a long long time. 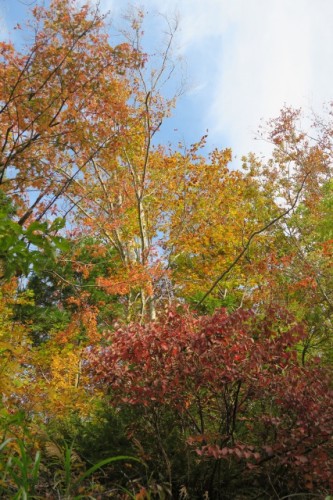 I wasn’t quite sure what to expect from Mount Hotaka, even though it is one of the 100 most famous mountains in Japan, but I was more than keen to get out of Tokyo and witness this year’s autumn colours in all their glory, and I was not disappointed. The oranges, reds, vibrant greens and all shades in-between burst through the scenery like an inspiring water colour picture. Individually, the trees were splendid, some peach coloured, some a classic shade of red and each one just as unique as the last. The beautiful colours on the side of a distant mountain tufted outwards in little soft puffs, creating what I described to my friend as the scene from a calendar. My love for the autumn season in Japan knows no bounds and it’s quite simply because of views like this. 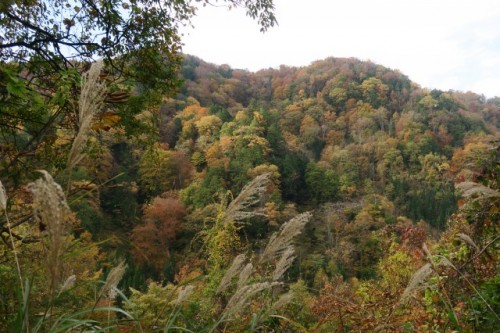 The climb to Mount Hotaka begins at Hotaka Jinja Shrine, a big red gate at the end of a paved road about 2km from Houdaigi camp ground. After 40 minutes of fairly flat hiking, you are presented with two options. Since the trail makes a loop, it doesn’t really matter which route you take however, the route to the left features chains, ladders and rope climbs towards the top, which are much easier to climb up than to climb down. So, I would recommend taking that route first. I found that the ropes and chains were actually my favourite parts of the hike. It was slightly wet and slippery, so we needed to be careful with our feet placement. Try to wipe your feet on a nearby rock before climbing and make sure you have a good grip on the rope. I even gave it a few tugs to make sure it was safe. 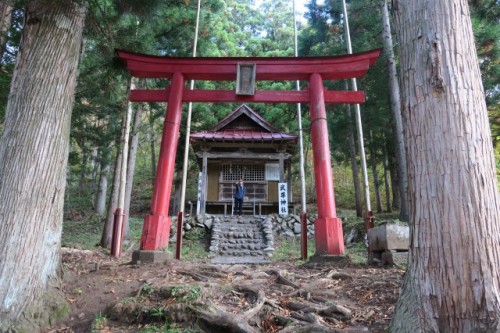 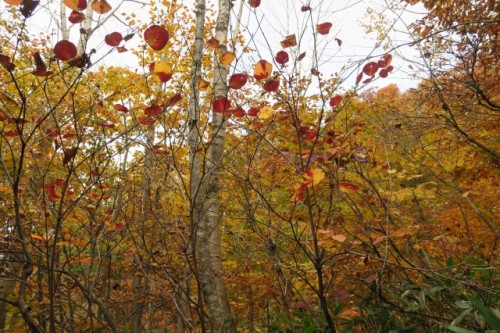 As we got more fatigued, the emotional rollercoaster began to sink in. Looking upwards, we thought we could see the peak. Hope and excitement bubbled within us as we made our final walk up the steep rocks, mud and tree roots. But as we reached the top of our struggle, it only revealed more of the mountain. We’d been tricked, but still we held hope that there wasn’t too much further to go, but we were wrong. This heart wrenching patterns of hope and despair continued seemingly forever. 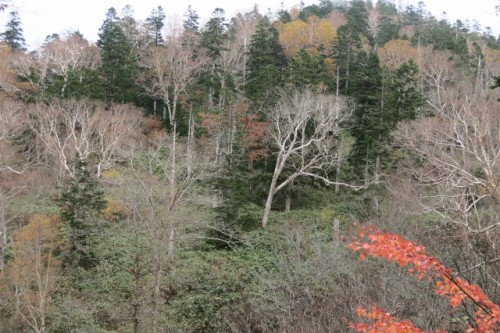 My mood lifted momentarily when I was presented with a strange scene at the top of a steep rope climb. It’s something I had never experienced before. We were in a cloud so thick that all we could see in the distance was white. It was as if the world had been blocked out, like in TV programs when someone is about to go to heaven and the the whole screen becomes a blinding mass of white. And, despite it not actually being the beautiful mountainous view I had expected, it turned out to be an experience that I will never forget. 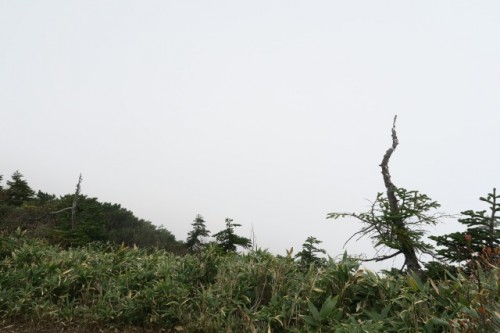 Alas, the boost in my mood did not last long before we were back into the cruel reality of relentless climbing. My aching bones, the weird terrain and circular pattern of Hotaka’s four peaks had me so deep in frustration that I had fooled myself into thinking that there simply was no summit. And just when I had lost all hope, we’d reached the top. People were settled down to eat their Bentos, taking photos with the sign at the peak and taking in the views. It was a very cloudy day, so we were not hopeful for a good view. Yet, magically the cloud began to pass and momentarily, we saw something truly amazing. The view of tiny mountains from the top of this one, all shadowy and majestic. It was a sight truly worth the grueling emotional roller coaster. 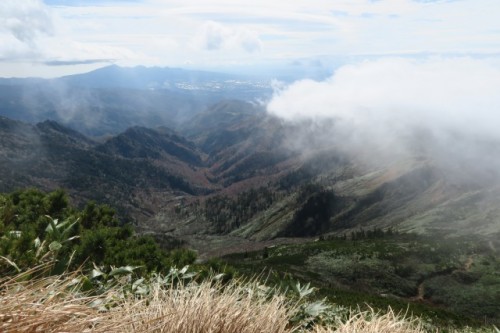 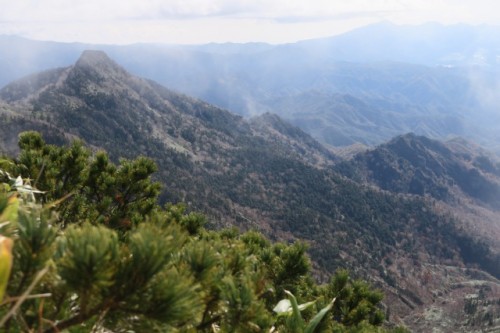 Be sure to leave the summit to the right (opposite the direction you entered it on). It shouldn’t be long before you find the road splits into three. We took the shortest route back straight ahead but it proved to be quite difficult. The narrow path was steep and filled with the kind of rocky slabs that cause you to slide a lot. I adopted the technique of staying very low to the ground, that way I had a shorter distance to fall if I was going to slide badly. As it happens, this challenge was actually pretty fun. 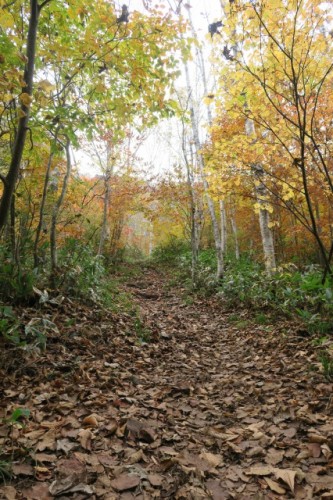 The road flattens out a little after this and become much easier to handle. That is of course until we came across a small, yet steep hill in the way of our path, which we had to climb. And then another. And then another. This harsh section of steep up and down nonsense after such an exhausting four hour climb up is the last thing you want when you’re exhausted but luckily, you are blessed with some really nice views, so green that they resembled the mountains back in England. At least, this was a little compensation for our hard work.

When the road begins to smooth out a little more, you’ll pass a few streams, at which point I was recommend you filling up your water bottle. After all, people pay a lot of money in supermarkets for this kind of natural, mountain filtered water, so you should take advantage. 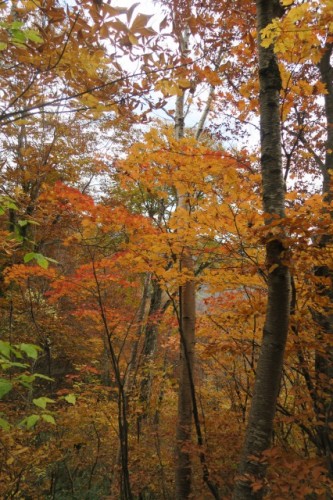 Advice:
As is natural with every mountain I’ve been to in japan, your path will be marked by brightly coloured flags but of course, you need to take a map as well. There are also warnings of bears nearby and, while the only animals we saw some amazing wild monkeys, you should perhaps take a bell and hang it from your bag just in case. 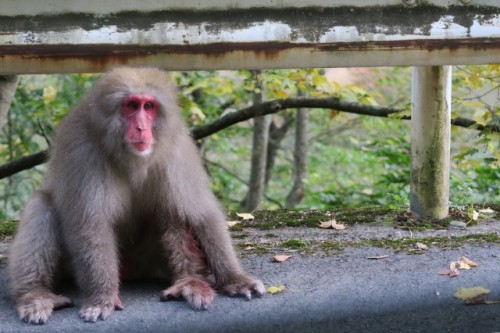 Be sure to take plenty of food and snacks with you. The entire hike took us around eight hours in total and it would be a miserable trip if you were to go be both hungry and exhausted. The closest convenience store to the beginning of the hike is about 40 minutes drive away, so be sure to stop long before you reach the mountain, or you’ll risk having to go back like we did. There is a camp on the mountain though, if you’re there early, everything is closed, even the toilets. There are toilets near the parking place and I severely recommend you take advantage of this. We did not see any toilets on the mountain and it is a long hike.

Finally, layer up! The top of the mountain had me wearing almost every layer I’d brought and I was still quite cold. Don’t be stuck wearing shorts like the poor guy I saw at the summit.

During winter the mountain gets meters and meters of snow, yet the road to the mountain remains open. However, unless you’re a real professional climber, I would recommend going between April and November, particularly for the autumn colours. 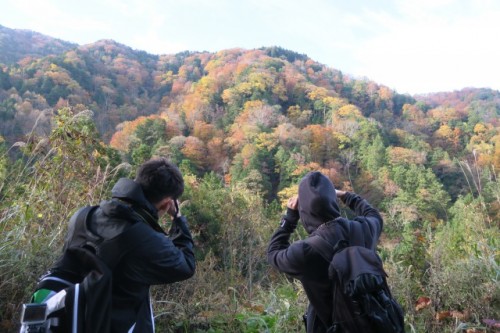