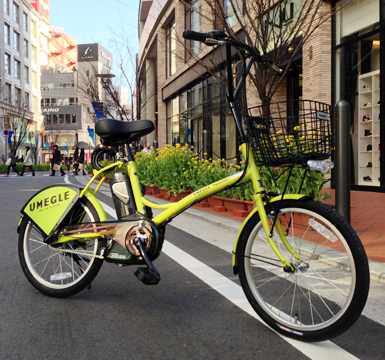 Cycling your trip into motion, you’ve arrived at your destination city.  You’re fresh in Japan, or at least, this town.  The air tastes different, the chatter scatters from your comprehension.  You might shake in palpable anticipation, fumble for your phone or guidebook for help.  You might be… overwhelmed.

Around Osaka and elsewhere, whenever I cross JR ticket gates with the traveling fates, I can rest assured.  Better than a fleet-footed denizen of the heavens, my transport assures me speed.  As helpful as an omniscient guide touring otherwise lost tourists to local spots, I am given a cursory acquaintance with each hole-in-the-wall spot.  This balm is in the chain of gain, wheels like rolling thunder peals: the rental bicycle.

Where to Find a Rental Bicycle

The rental bicycle is my favored first-time city guide.  Cycling a new city conducts my electrified nerves into motion, and I can cross streets more smoothly than language barriers – all with speedy ease.  But where do I rent a bike, and how? 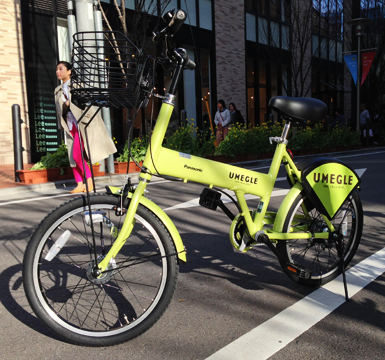 Bicycle rental services are offered in many places.  Near main stations, such as JR Osaka, rows of uniformly-colored bicycles can be rented by point card or credit card.

This rental system is termed “share-cycle.” If you fancy racing the streets in a competition of style against squeal-breaking mama-charis (the grandma’s bicycle!) and clunky baby-basket bicycles, these bicycles are your choice.  First you will need to unlock one from its bike bay, though.

How to Rent Your Bicycle

Each share-cycle station has an automated kiosk. A touch screen will ask you to register your name and contact information. For payment, use your credit card or whichever point card you carry.  Some share-cycle stations will have electronically assisted cruising bicycles for a slightly higher rate.  When you have made your decision, choose the bicycle you like – Umegle of Osaka even allows bicycle choice by bay number. The kiosk will print a ticket with the bicycle number, and you will hear a click of release from the bicycle of your pick.

Though the bay is unlocked, you must unlock the bicycle itself. On your receipt, there is also a combination number. Before rolling your bicycle from its binding, spin this combination to unfasten the lock.  Then, leave like a leaf on the wind.

Don’t forget to return your bicycle to a vacant bay at the station.  With Umegle-Chari you will be charged for the portion of hours you spent swerving around Osaka like a loosed shinkansen; the first hour costs 200 yen followed by a 100 yen hourly rate.  Your cycling spree caps out at a crazy three days!

When you return from your cycling, wheel the bike into its bay and waddle weak-kneed to the kiosk. Here, tap-type in your bicycle number.  Your registered name will be cleared along with a small pittance into the share-cycle stash. When in doubt, look for an attendant!

There are other share-cycle systems, such as Docomo in Tokyo, that operate similarly.