Do you know about Akihabara in Tokyo? The giant sprawl of stores appealing to games, anime, manga, cosplay, and well… just about any type of geek! Akihabara is a great place to go, for sure, but without going there many times you will surely feel like you didn’t get a chance to see everything. It’s really big. But then there is Den Den Town. Located just south of Nipponbashi station in Osaka, Den Den town offers many of the same things as Akihabara, earning it the name “Osaka’s Akihabara”. 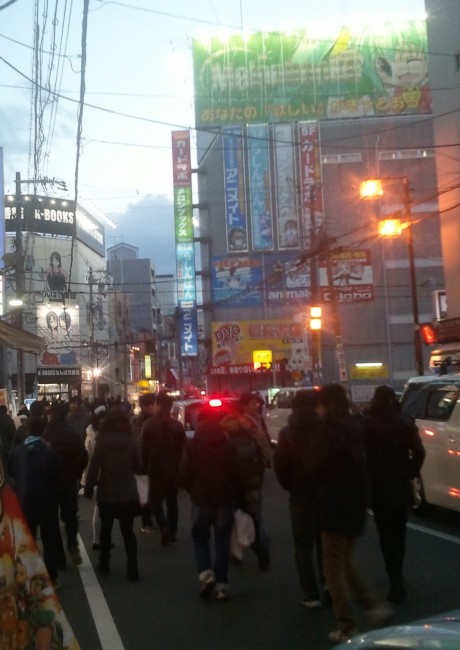 Den Den Town in Osaka: What You Can Find

With its roots in electronic goods, Den Den Town in Osaka has grown into a place where anything from second hand electronic devices (Sofmap), vintage games (Super Potato), Cosplay goods (Cospatio, K-books), anime figures (just open your eyes), Gundam plastic model kits (Joshin) to game arcade centres (Taito), fan art manga (Melon-books) and maid café can be found. A trip to Den Den Town will be a fruitful adventure for any type of geek, and an interesting look into various Japanese subcultures for the average tourist.

Whilst Den Den Town is officially located in the Nippombashi district of Osaka, I have always found access from Namba station to be more convenient. Get off at the subway and follow the supplied map down to Den Den Town or check up Osaka on a navigation app! 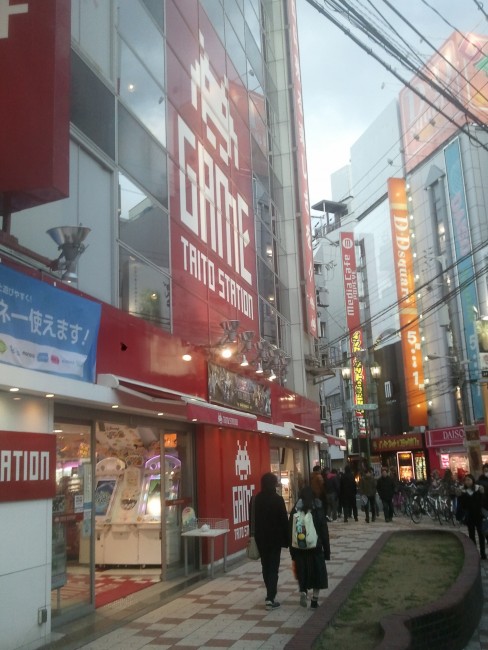 The Taito arcade centre marks the entrance to Den Den Town. Arcade games are still pretty common in Japan, so go inside for a bit of nostalgia or to experience how multiplayer games were commonly played before the current age of convenience. The centre is divided into floors. The first two floors are crane games, where you can try your skill to win prizes. On the 3rd floor they have a huge variety of music games (think Dance Dance Revolution, Guitar Hero). It can be quiet entertaining going here just to see some real pro’s dominate the games. The 4th floor has various multiplayer games, such as Street Fighter and Initial D. The 5th and 6th floor are for card game players to meetup, and are not really that interesting unless you know about that stuff and speak Japanese. 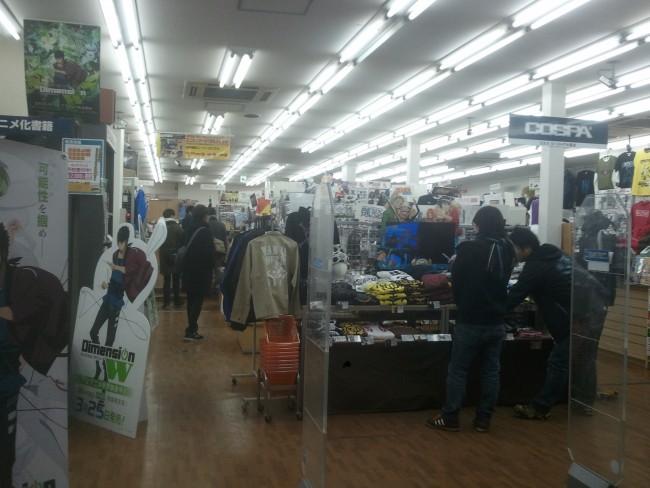 Heading further into Nipponbashi and Den Den Town, one of the first interesting shops we see is Gee! Store / Cospa. At Gee! Store you can get all kinds of licensed anime and manga apparel, and very expensive cosplay items. I say very expensive, but the quality really can’t be beat. If you are looking for that Naruto t-shirt, this is your place. 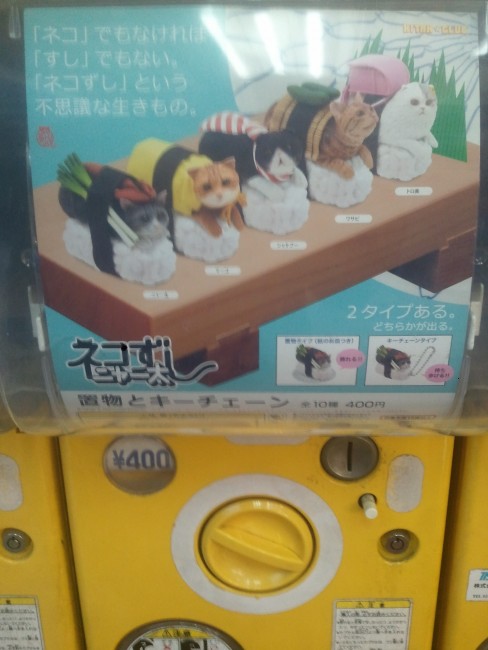 All around Den Den Town, you might notice these little vending machine things containing toys and other things. This is the “gacha-pon”. The toys inside range from 200 yen to 400yen, and vary from licensed games and anime like Dragon Ball to all kinds of oddities. Don’t dismiss it as something exclusively for the anime fans, there are animals, sushi... even animal sushi… which make great gifts or souvenirs.

Further down the road, on the opposite side to Gee! Store, turn right into one of the two main streets that make Den Den Town. 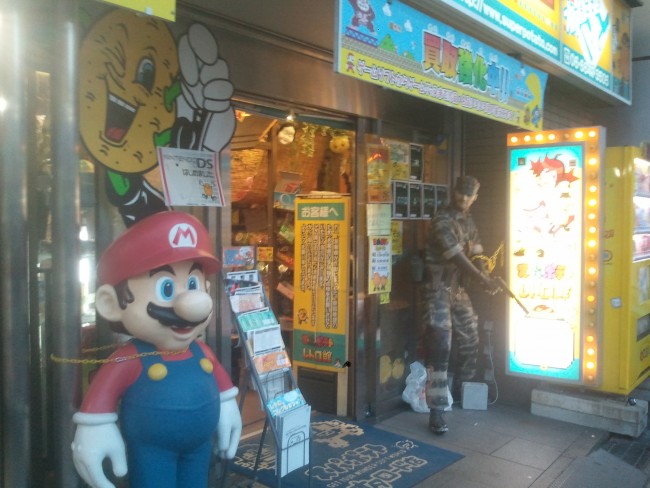 All along this street are countless shops selling many anime and manga culture things, but a stand out is the nostalgia invoking “Super Potato”. In Super Potato you will find retro games from essentially the beginning of Japanese gaming, boxed and in mint condition! 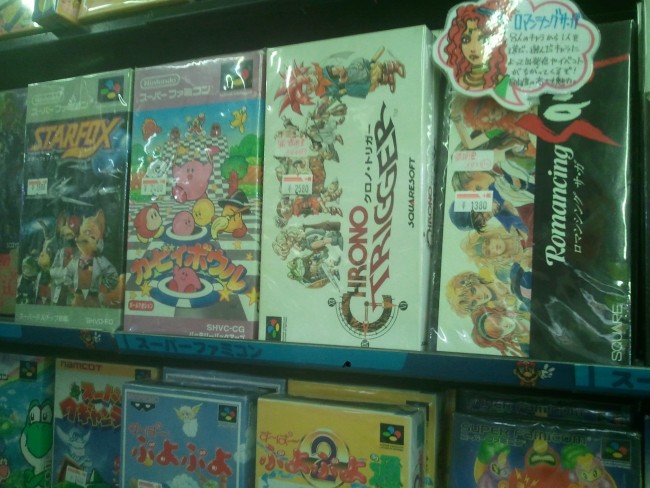 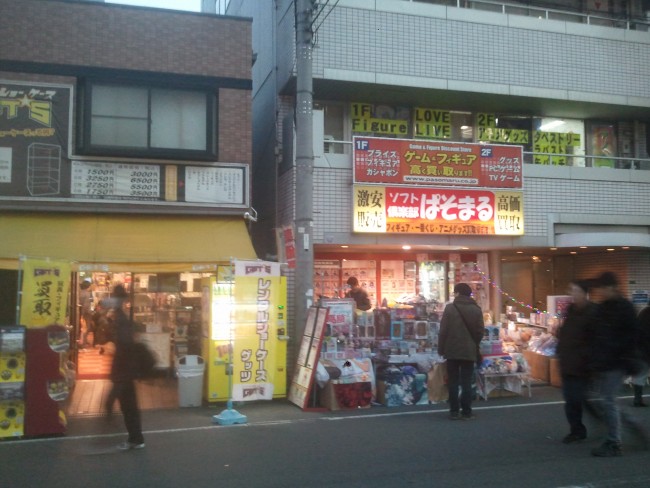 Further into the same street there is a store called GETS. I really like GETS as the prices for anime goods are very reasonable, and they tend to have a good selection of figures and other things.
If you are after toy figures of characters from anime and games, you will probably want to go everywhere, but check these guys out too. 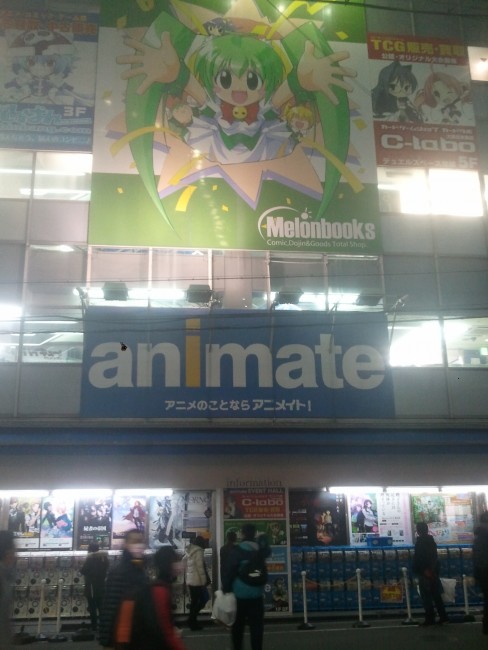 At the end of the street, the big chain store Animate is found. Animate sells a large variety of anime, manga and game themed trinkets. You can get anything from pens, phone ornaments and toys, to books and CDs.

Just outside of manga haven Animate, the other big shop on the corner is called ‘K-books’. The first floor is similar to Animate and stocks for example manga, but the second floor specialises in cosplay. 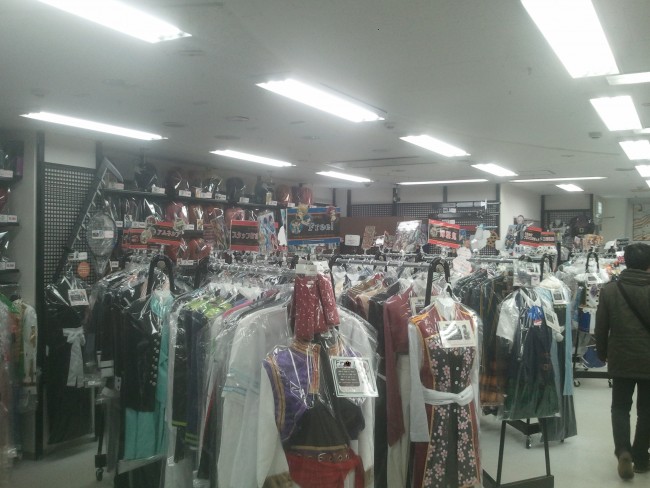 Compared with Cospa it’s a little cheaper, but I wouldn’t say the quality of the toys is much worse. The selection is extensive and includes cosplay stuff from new to old, covering a range of popular anime and manga characters.

Do you know “doujinshi” manga? In Japan, it is for popular for aspiring manga artists to create and publish fan art and stories based on popular anime and manga works. This sounds great in theory; what could be better than more Evangelion? But in truth it’s almost entirely pornographic manga. Melon Books is a store that specialises in these kind of books. If you want that then exercise your rights as an adult. If you’re not looking for it, just stay clear of any store that sells books or DVDs in Den Den Town. 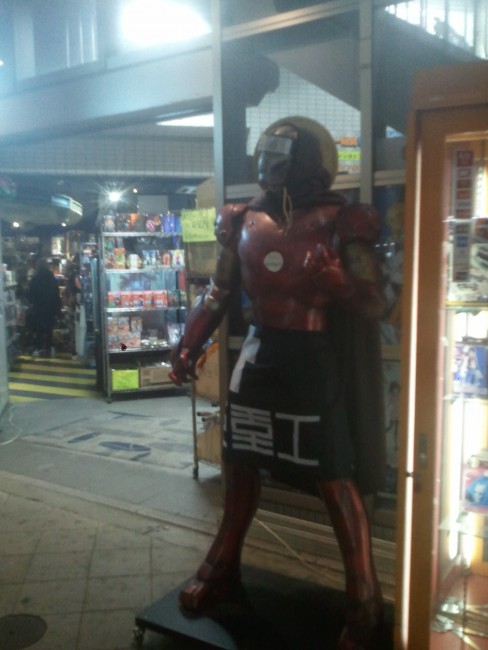 At the end of that street you will come to a main road, this being the other main part that makes up Den Den Town. There are shops in either direction, but heading back north (toward Nipponbashi station) you can see a life sized Iron Man statue! Iron Man marks the store called “Hero”. On the first floor of Hero they have much of the same stuff that’s in most of the other toy stores. Head up to the second floor however, and you will find some very vintage toys ranging from Godzilla and Astro boy, to western collections like Mad Max, Terminator and Star Wars. 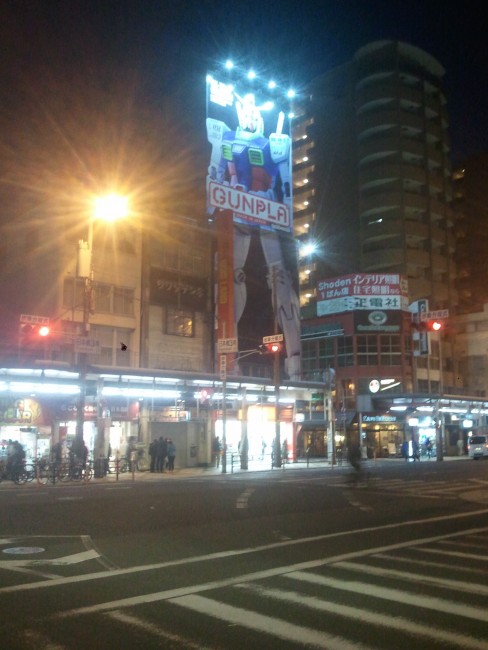 From Hero, looking out across the street you can see a giant Gundam picture. In that building is the toy store called “Super Kids Land”. Not surprisingly, it has a huge selection of Gundam. For those readers who don’t know, Gundam is a series of plastic model kits and anime shows that are (or were) immensely popular in Japan. The selection is incredibly large and the challenge level broad. If you enjoy model assembly and want to buy a toy Gundam in Nipponbashi, just be warned that the instructions are usually in Japanese only. 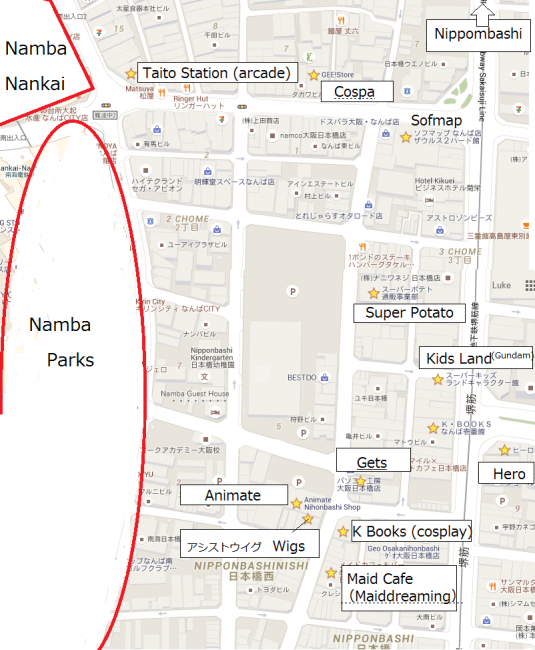 Using the map of the Nipponbashi area provided, you can easily find all the locations we talked about today, but you will surely see many other stores en-route that fancy your attention. Whilst not as big as Akihabara, Den Den Town has much to offer, and a search for manga is all-in-all more manageable than its bigger brother in Tokyo. Enjoy your toy shopping in Nipponbashi, and good luck at the crane games!

01julalldayRokugatsudo Festival in Kagoshima(This event will be held on a much smaller scale in 2020.)