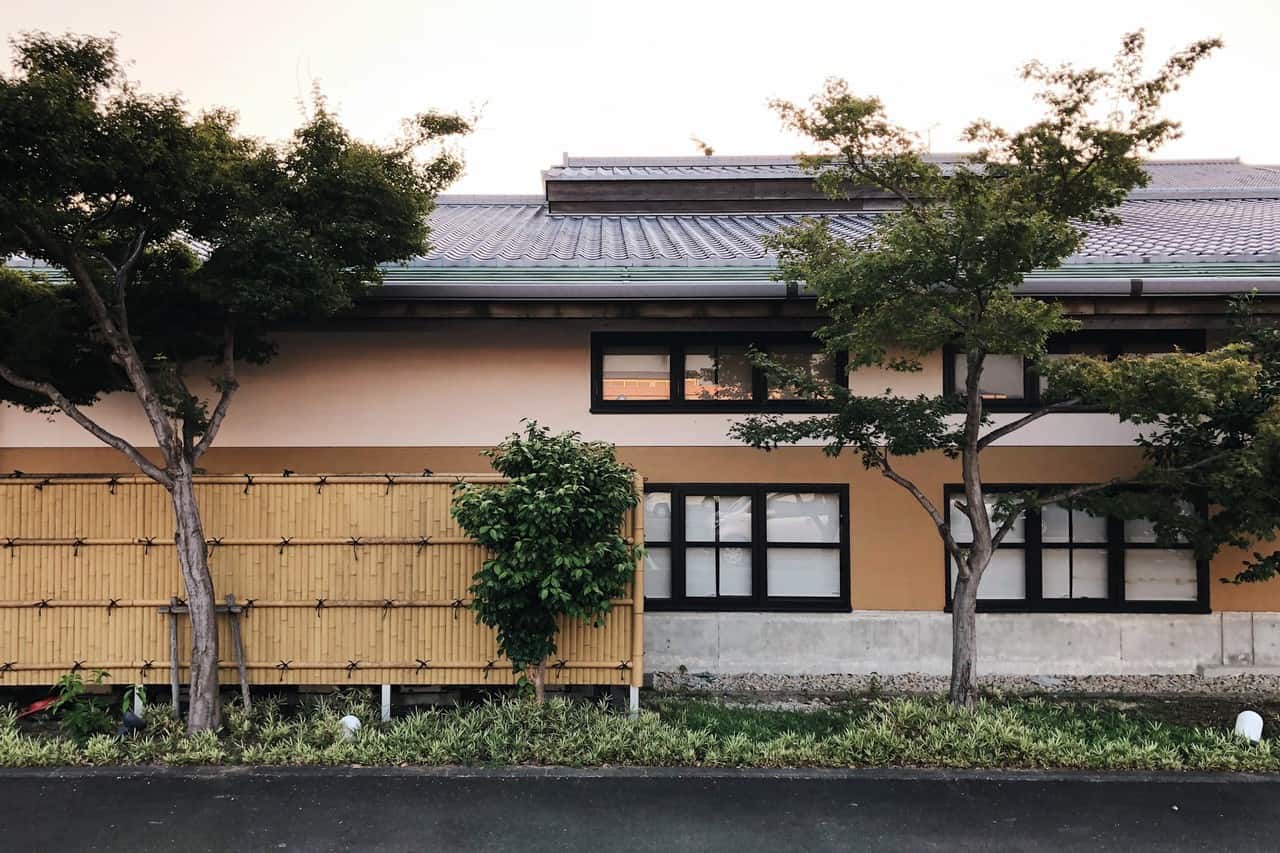 A Modern Culture Experience and Staying in a Ryokan in Toon 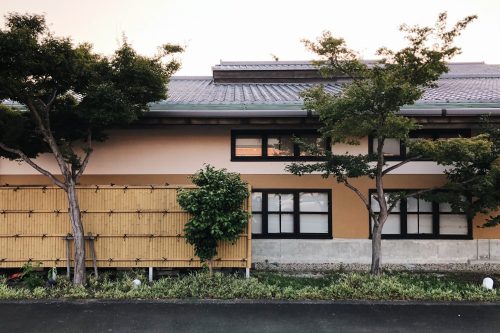 During my weekend in Ehime, a lesser known prefecture on Shikoku Island, I had the opportunity to discover the small city of Toon, located 30 minutes away from Matsuyamashi Station. I was particularly excited at the idea of visiting this part of the country because to me, discovering the countryside and its lesser traveled areas is a good way to immerse yourself in authentic Japan.

Staying in a Ryokan in Toon

Whenever I think of traditional Japan, one of the first things I imagine is staying in a beautiful ryokan. Ryo… what? No worries, I was not familiar with this term either before coming here. A ryokan is simply a Japanese style inn, often built with traditional construction material such as wood, bamboo or rice paper. You go to a ryokan to fully immerse yourself in Japanese culture, unwind and enjoy all the facilities such as hot spring baths. 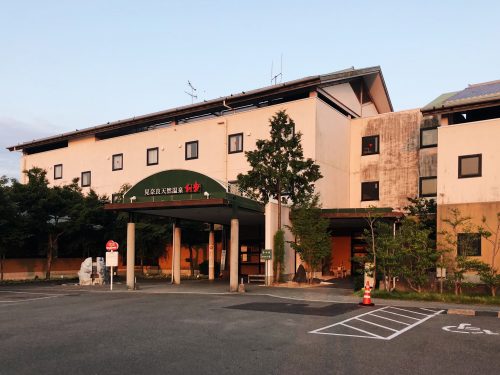 Even though Toon is a rather small city, it hides an abundance of treasures. As soon as I arrived there, I checked into my inn, Riraku. Located in front of a parking lot, it is conveniently close to a wide array of shops, including a well-stocked supermarket just a few metres away. I know this doesn’t sound like the charming setting you were expecting when I mentioned an authentic stay in a ryokan. But don’t worry, you only need to walk about ten metres further to find a gorgeous view of the rice fields and mountains. This is what Japan is all about: the perfect balance between convenience and tradition. 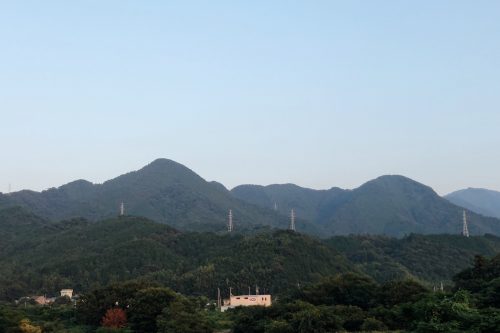 The moment I arrived, I received a friendly welcome from the entire staff, who then gave me a tour of the facilities before leading me to my room. I have to say my expectations were fully met, with a peaceful atmosphere that only the Japanese know how to create. From the corridors to the dining room and the multiple rooms designed to rest in, the Riraku inn offers an environment truly made for relaxation. 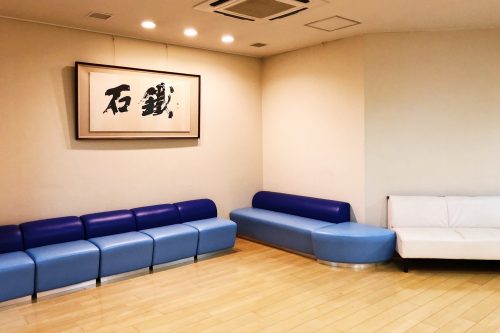 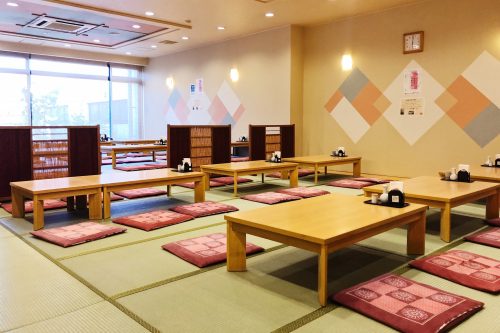 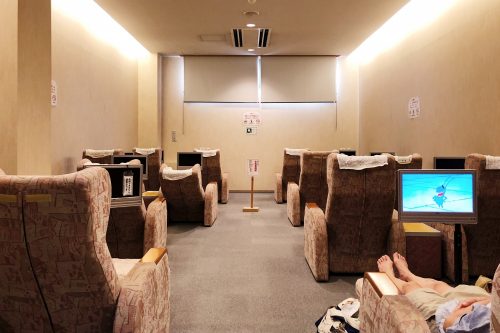 I decide to indulge in my favorite thing to do when staying in a ryokan: soaking in hot spring baths, called onsen. I am fortunate enough to have several onsen experiences since I arrived in Japan, but trust me when I say onsen like this one are quite rare. On top of being open from 5pm to 1am (please go to the map at the end of the article to find all the details and practical information about the ryokan), the “Minara Tennen Onsen” of the Riraku ryokan in Toon is known for being one of the most famous baths in Japan, drawing from a hot spring that goes as deep as 1500 metres underground! 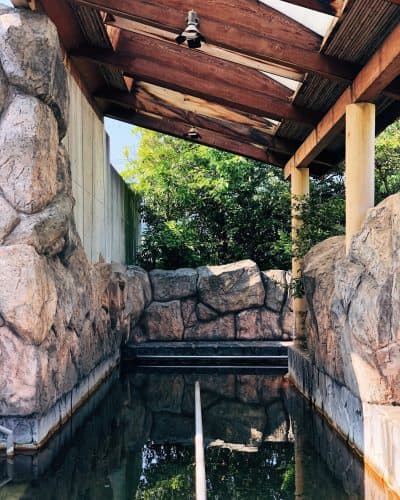 One of the baths at Riraku

True to its reputation, Minara Tennen Onsen does not only offer one bath but eleven baths, each of them more beautiful than the last. From the indoor to the outdoor area, I could soak in theraputic water as hot as 40 degrees. However, not being a huge fan of hot baths in the middle of summer, I preferred the small bathtub filled with cool refreshing water in which I basked for a good 15 minutes. 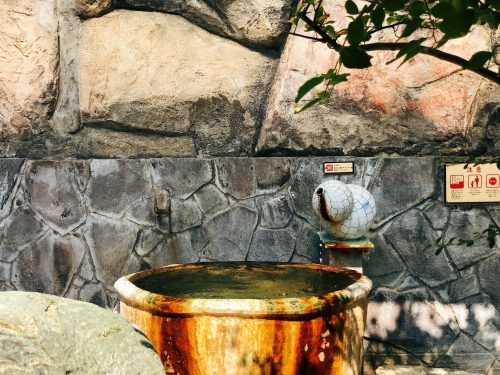 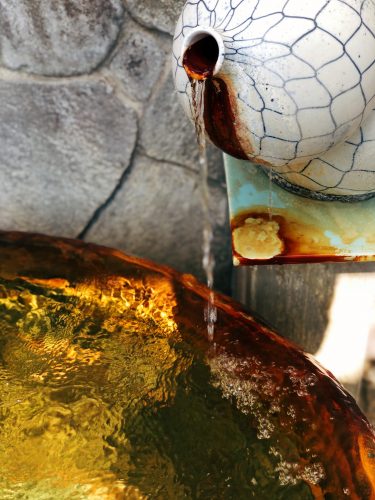 The most difficult part of experiencing the onsen is making the decision to leave one after you’ve spent time relaxing in it. When the relaxation started feeling like physical exhaustion, I decided to go back to my room, where I fell into bed and deep, welcoming sleep. 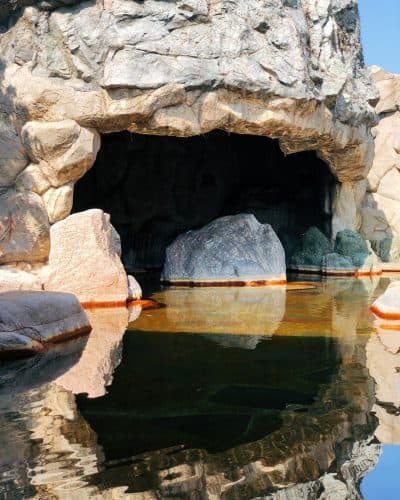 A bath set in a cave

What better way to wake up than starting the day with an early morning walk? Since the restaurant was still closed when I woke up, I decided to make the most of my time there to wander around the rice fields and admire the landscape. I located a few traditional houses standing in the middle of the fields, probably the homes of local farmers, who were already out working this early in the morning. 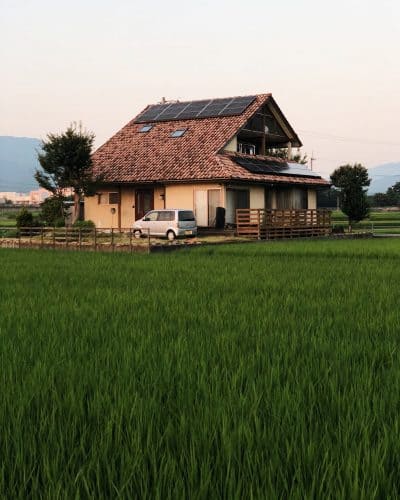 A house in the middle of rice fields

At 7 o’clock, the breakfast buffet was open, perfectly timed to the rumble in my belly.  I headed straight to the restaurant to enjoy a Japanese breakfast. In Japan, it is common to sit on the floor, on small cushions called zabuton during meal time. I can’t really explain why but I find that informal style cozy and friendly!

Unlike European breakfast buffets, here you will be served a multitude of healthy options, ranging from noodles to rice, as well as salads, soups and fresh fruits, to accompany meat or fish. Everyone is free to select their own foods before taking a seat on the floor at a low table. 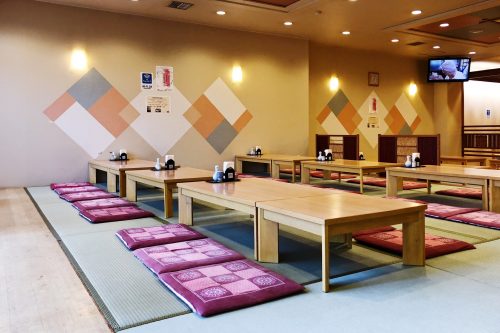 The traditional dining room in Riraku

Although I prefer a sweet breakfast, I always try my best to eat as healthy as possible whenever possible. I took this buffet as an opportunity to fill my plate with various new flavors and to recharge my batteries for the day! 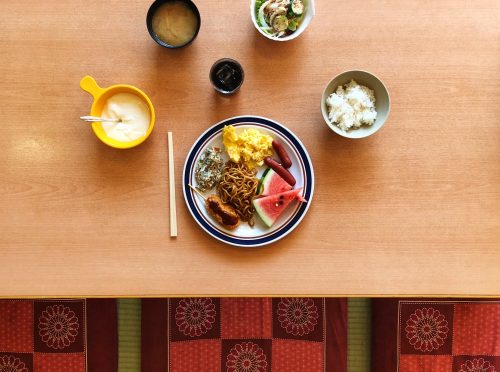 A Japanese style kind of breakfast

Early in the afternoon, I went to the Botchan theatre, only a five minute walk from the ryokan. One of the biggest advantages of traveling as a blogger is to discover and experience things I probably never would have tried on my own. And guess what? Attending a Japanese musical in a small independent theatre is one of those things! 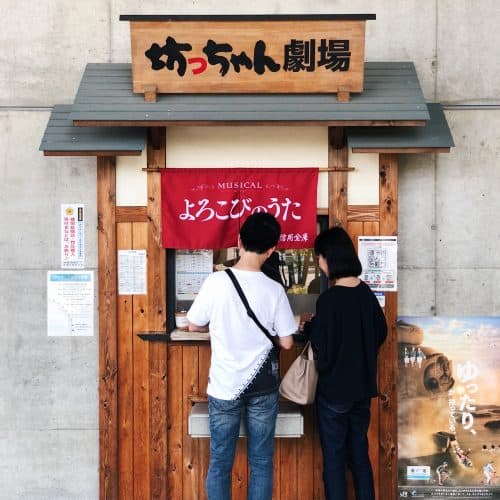 As soon as I arrived, the owner and staff gave me a warm welcome before quickly explaining the history of the Botchan theatre. This small regional theatre, which opened in 2006, produces plays inspired by local history and traditional Japanese culture. Given the fact that I cannot speak a word of Japanese (okay, maybe one or two but not more), a short summary of the play given to me so that I would not feel too confused.

As I have German roots in my family, I was pleasantly surprised to discover that the musical told a love story between a German soldier and a Japanese woman during World War I. Just what I needed not to help with my homesickness! 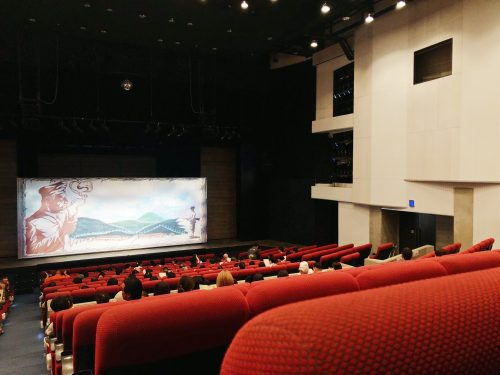 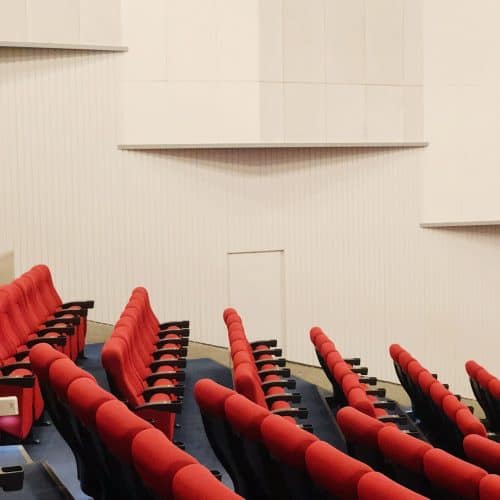 The red armchairs, a staple of theatres

What’s magical with theatre is to how a play can convey emotion that transcends language. I have generally not been a fan of watching plays, but to my surprise, the quality of acting, the songs and the touches of humour of this musical sincerely moved me! To top it all off, I even had the chance to meet the actors after the play, who seemed as delighted as I was to pose together for a photo. 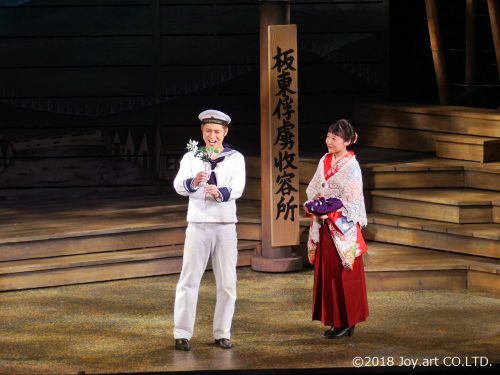 The main actors of the musical 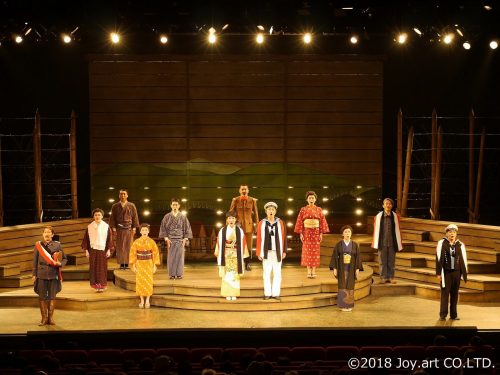 The whole crew of actors

Every trip I make to the Japanese countryside leaves me with impressed with the kindness and generosity of the local people in rural Japan. If you are looking to step off the beaten path and experience places that are both peaceful and vibrant, consider making a stop in Toon, in Ehime Prefecture, where you will undoubtedly be welcomed with open arms! 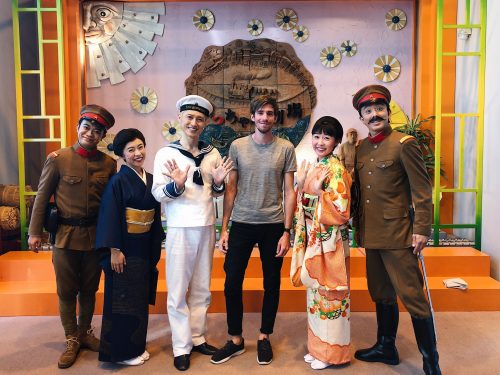 A souvenir photo with the musical actors