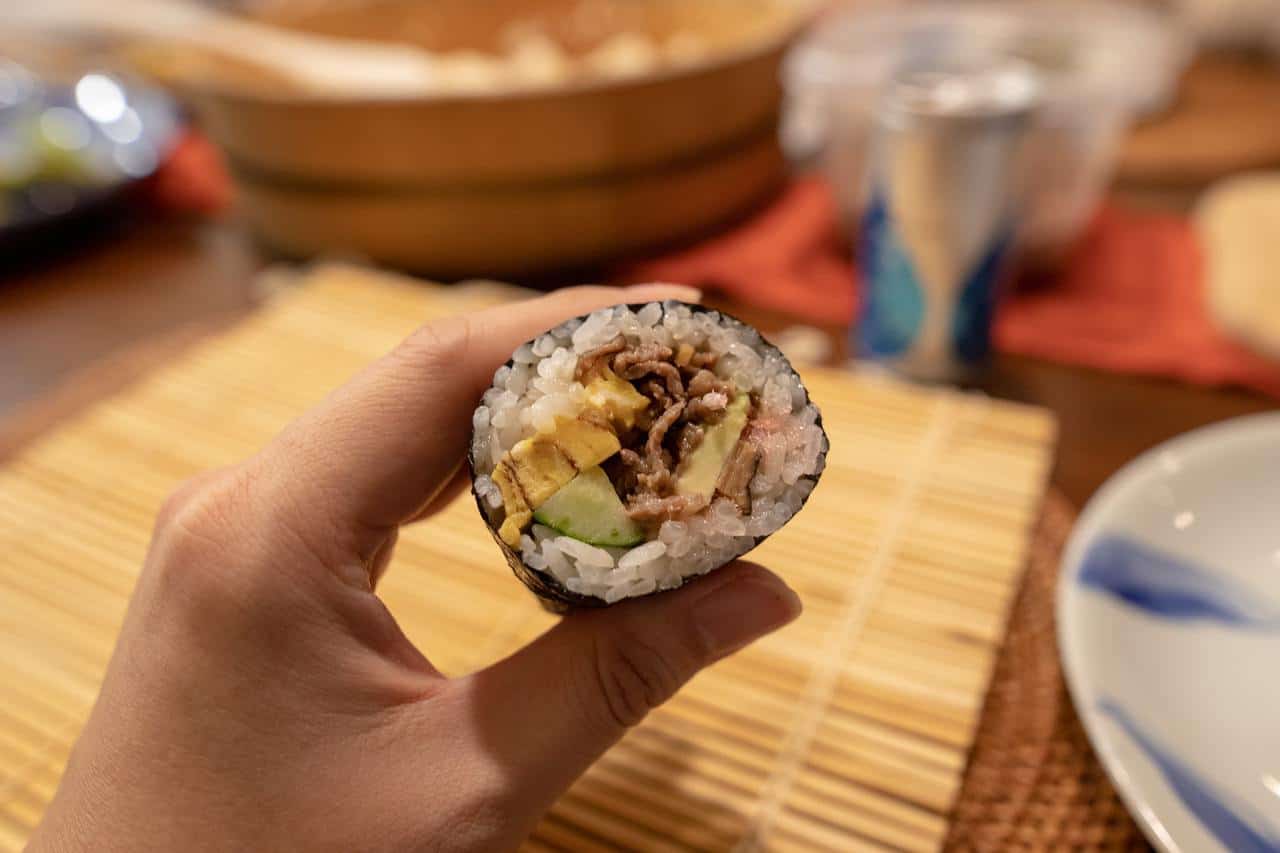 Eating mamemaki sushi (豆まき) is a well-known custom for most Japanese on the day of Setsubun (節分), which is the day before the beginning of spring in Japan. For those residing in the Kansai area, however, eating ehoumaki (恵方巻き) might be preferred to complete their luck-welcoming ritual of the night.

Where ehoumaki come from?

The sushi roll, uncut and fatter than regular sushi known as a futomaki (太巻き), consisting of seven ingredients. These can range from the typical cucumber, shiitake mushroom, and cooked egg, to other adapted versions like seafood-only or regional ingredients. The use of seven toppings – not any more or less than that – is a symbol of the Seven Lucky Gods (七福神, Shichi Fukujin) from local folklore who are in charge of bringing prosperity in business and good health.

How to Eat this Sushi?

The custom of how to eat an ehoumaki roll, however, has less free-choice than the choice of ingredients. Hold up the sushi you face in the lucky direction of that year, close your eyes, pray for a good year in heart, and finish eating the roll without uttering a single word. Why the silence, you may wonder? Well, you do not want any luck to escape, do you? For this reason, you also eat the ehoumaki roll as a whole rather than cut it into smaller pieces. Just imagine the whole family sitting at the dinner table, everyone facing the same direction with their eyes closed, eating in complete silence…

Difference between mamemaki and ehoumaki

Unlike mamemaki which has been a long-standing tradition, ehoumaki sushi is a rather recent marketing invention said to be founded around the 1930s around Osaka by the sushi and seaweed business associations. Ehoumaki, as it is commonly known, was originally called marukaburi sushi (丸かぶり寿司) or simply makisushi (巻き寿司, rolled sushi). The new name was in fact given birth through yet another marketing campaign by the Seven-Eleven convenience store chain in the 1980s. The name and custom were popularized nationally as the selling spread from Kansai to other areas over time.

Today, you will see ehoumaki ads and pamphlets almost everywhere around the New Year up until the day of Setsubun in supermarkets and convenience stores. Unsurprisingly, businesses and marketers have started taking advantage of sushi’s popularity and created all kinds of similar products such as the Setsubun roll cakes or even burritos, to ensure that you will receive luck in any desirable way this year.

No worries if you miss the one and only February 3d of the year to eat ehoumaki sushi as you may from time to time be able to find, though less common, ehoumaki for spring (May), summer (August), and autumn (November). Four chances for the four seasons!

This year, the lucky direction would be south-southeast in case you are interested in getting ehoumaki for yourself and the family. Remember, eyes closed and not one word until the end of the sushi roll. Have fun!