Usa city, still shrouded in a sleepy haze, is awaken by the signs of the dawn. Soft rain gently drums on the old-fashioned rooftops and the rows of lush green rice paddies, awakening an ambient orchestra silently playing a foggy, peaceful tune. Now and then a car makes its way through the narrow streets, its tires splashing through the rain puddles that have formed over night. The orchestra continues, though in my half asleep, half conscious state, I am only barely listening. Finally, as my ringing alarm swiftly propels me into full consciousness, I realize that today really is today and that  I have woken up in the Japanese countryside, in Usa city.

A Spiritual Journey, Step by Step

Leaving the comfort of Naru hostel, we head towards today’s activity. The vague description in my itinerary, “Trekking on Mount Omoto to Omoto Shrine” had already stimulated my imagination, creating pictures of fantastic landscapes, deep forests and all the wonders that would await us as we climbed the mountain. But first, we had to reach the foot of Mount Omoto, starting from Usa Station. 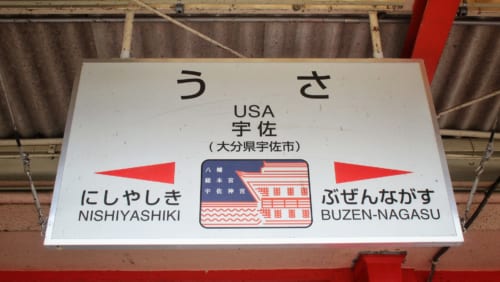 Our train ride led us to Nishiyashiki station, only a few minutes from Usa. Nishiyashiki station is one stop from Usa station, as seen in the picture above. Inspecting the sign found on Usa station’s platform, I wondered if depicting Usa City’s flag similarly to the American flag was a conscious decision. After asking a local source, I can confirm that this clever design choice was most definitely intentional.
After a quick ride, we arrived at Nishiyashiki station, where the real journey to Mount Omoto begins. Finding the right starting point to the actual trail was our first priority. I advise you to follow the signs leading to the trail, or, as a backup plan, use Google Maps, which also shows the trail to Oomoto Shrine. When following the signs, pay attention to the kanji used for Mount Omoto (御許山) or Omoto Shrine (大元神社). 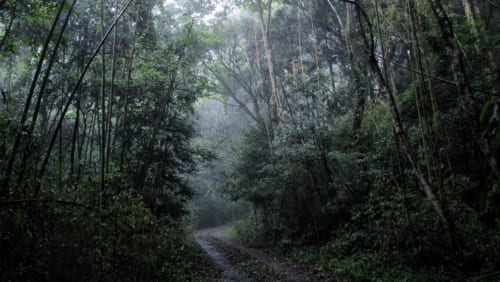 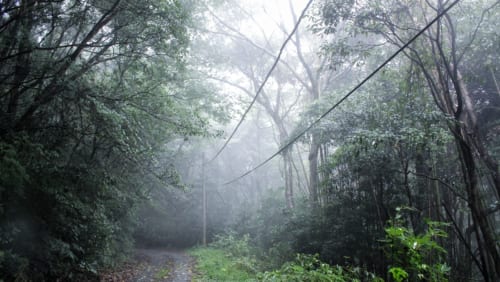 Our orientation now set, we were now ready to discover what awaited us on the fog shrouded path winding up Mount Omoto, towards Omoto Shrine. Step by step, we ventured along, first on a concrete road surrounded by rice paddies, then, after crossing the treeline, we found ourselves in the middle of a deep forest. The fact that the rainfall had steadily increased since our departure from Usa didn’t bother us in the least. Amidst this lush landscape of shades of dark green encompassing the path ahead of us and the smell of fresh rain rising from the forest, a sense of adventure was growing in us. On Mount Omoto, everything feels alive. Be it flora or fauna, each encounter with the natural world is worth a moment of quiet reflection. 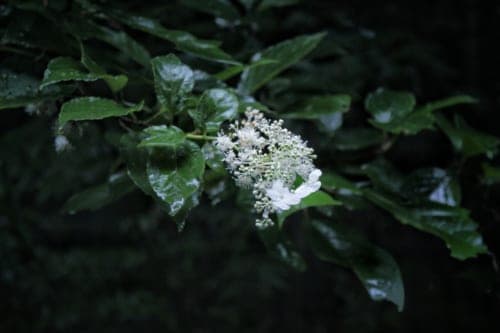 Here we see the Noriutsugi Flower, a common sight on Mount Omoto. It belongs to the same family as one of Japan’s most beloved flowers, the ajisai (hydrangea). 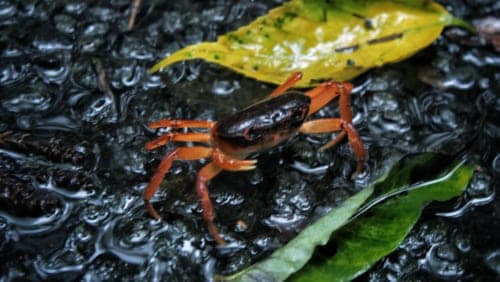 On rainy days, crabs can be seen crossing the pavement, as the wet environment makes it easier for them than on a hot summer’s day.

Closer to the Edge of our World 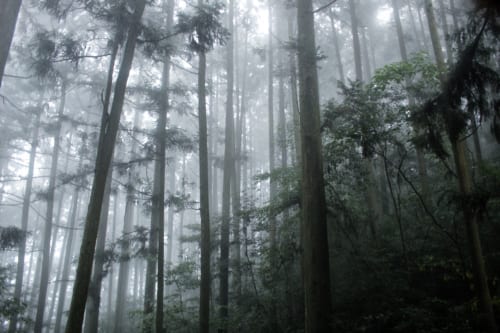 The concrete path had slowly transitioned into a dirt road, growing more and more narrow as the fauna became thicker as we climbed. We ascended into the fog and clouds we had seen from the foot of the mountain. Our entire surroundings was in the midst of a sea of clouds. Everything around us was muted in hazy shades of grey creating an indistinctness between the leaves, branches and individual trunks. We truly felt as if we had entered a world unlike our own. Initially, Mount Omoto had welcomed us with heavy rain, but the rainfall now felt natural to us, as if we had a spiritual connection with the landscape around us. 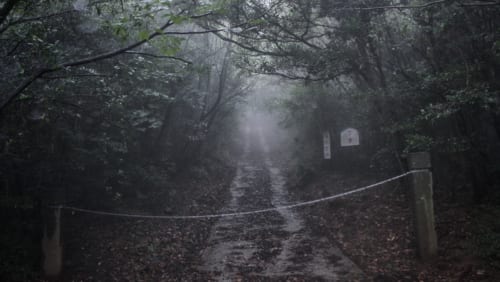 Following the path, you will come to this chain blocking the road, as it seems. Don’t be intimidated; this chain is meant to prevent access by motorized vehicles. Step over the chain and continue on your way. 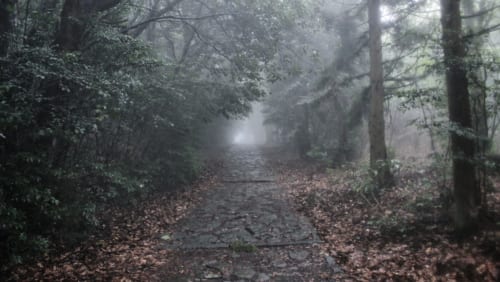 Mount Omoto had caught me off guard with its atmosphere, from foot to summit, from the first step of our pilgrimage trail to the last. I found myself overwhelmed with sensation, utterly astonished by the world we had been led into. And then, we reached our destination, Omoto Shrine. 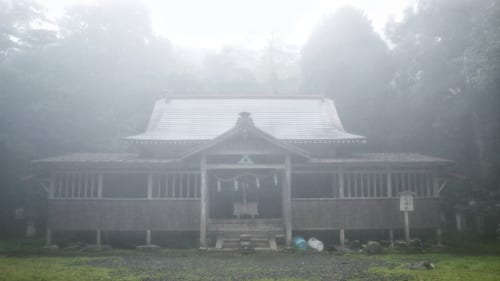 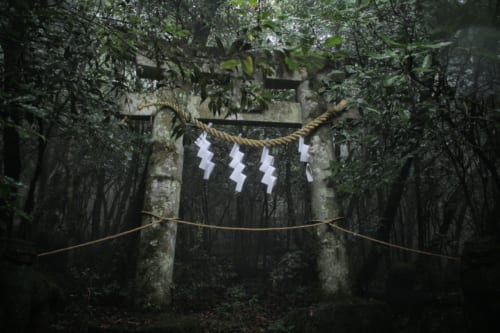 The main temple grounds were flooded by pure white light poured in from the sky above. This reflected our feeling upon arrival: we were closer to heaven.

At this point, praying at the shrine seemed like the most fitting idea. Here we were taught that Omoto Shrine differs from the usual Shinto prayer ritual: Instead of clapping twice after ringing the bell and subsequently bowing twice, you must clap four times. This also applies at Usa Shrine. In fact, the two Shrines have a shared history:

It is unknown when Omoto Shrine was initially built. However, over 1300 years ago, it was known as the original Usa Shrine and dedicated to three princess deities. This changed when a new deity was enshrined here; the war god Hachiman now occupies the original Usa Shrine which was moved down to the valley. The original shrine on Mount Omoto had its name changed to Omoto Shrine. This means, today’s Usa and Oomoto Shrine are both dedicated to Hachiman. Because of this mutual history, the shrines share some of the same customs. On both of the shrine’s grounds, a holy tree entwined by Shimenawa can be found, although Omoto Shrine’s tree has been heavily damaged by lightning. Still, it’s recovery and rapid growth are an amazing sight to behold. 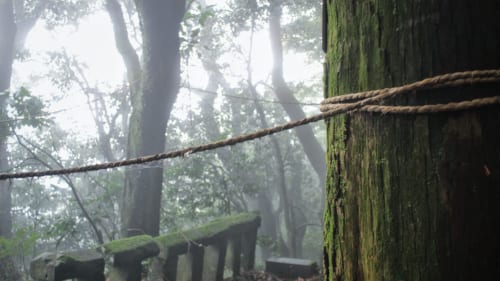 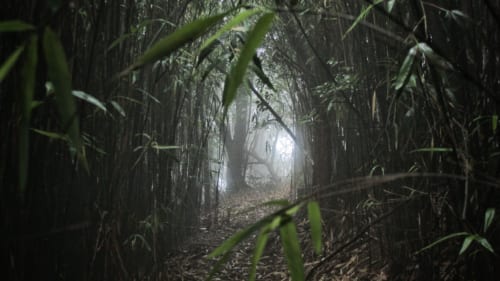 Where will your Pilgrimage lead you to?

After reaching Omoto Shrine, you can explore the area to uncover its mysteries. Start from the main shrine building and see where your new path will take you, for every direction will lead you from one spiritual location to the next. Omoto Shrine and the pilgrimage trail leading to it are full of surprises, rich in history and will simply astonish you to the edge of your mind. All of these aspects come together to offer you one of the most spiritually enriching trekking experiences you have ever experienced. It is no surprise that Omoto Shrine and its surrounding areas have been a training location for Buddhist monks for centuries. 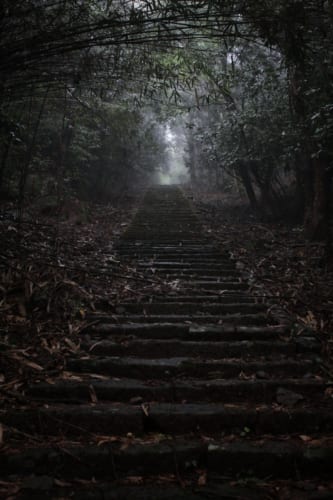