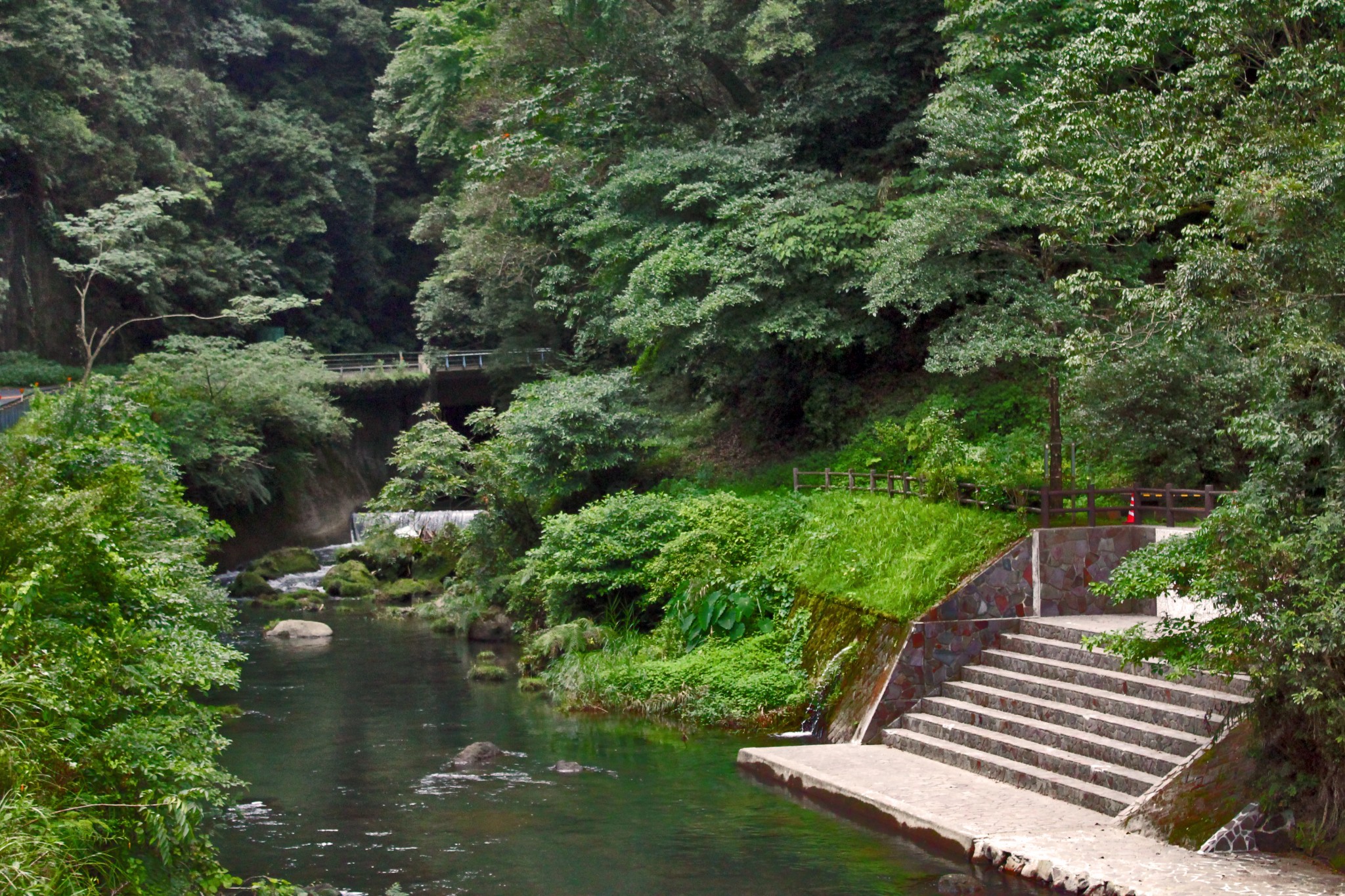 Another hot day was pouring down from the sky during our travels in the Kirishima region. That day, we did hundreds of kilometers of driving and walked through natural spots of the wildness of thick forests that hide beautiful waterfalls. As the day slowly turned colder into afternoon, we decided to take a different course back. Again, we were hoping to encounter some small discoveries. 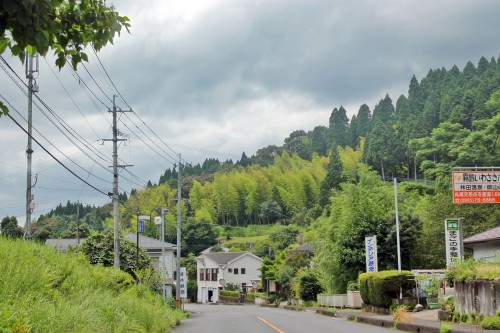 We were not disappointed. Kagoshima area is full of unseen and concealed places which are so local that only autochtons know about them. Likewise, they are so long forgotten that you can only come across them by coincidence or pure luck. Or a good strategy: turning off your navigation in the car.

Since we were driving for a long time and there was absolutely nothing that piqued our interests and there were only dense unwelcoming mountains, we were slightly losing hope of an unexpected rendezvous. But then, just suddenly, in the front of us appeared something resembling a small traditional inn. 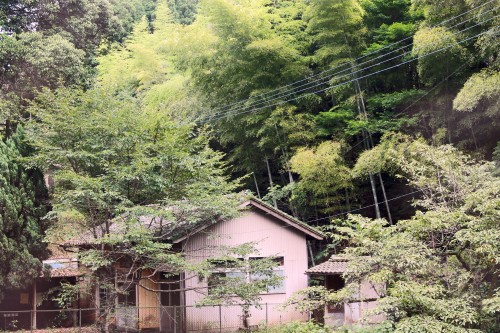 This old house seemed to be merging with the mountainous landscape behind it so well that we had an impression that both of them were one and the same. Not so far away from it there was a timber souvenir stand full of unknown (only to me!) and interesting things. Next to it, surrounded by a small yet decorative garden was a foot onsen with a timber roof above – a perfect hideout from the dazzling sun. 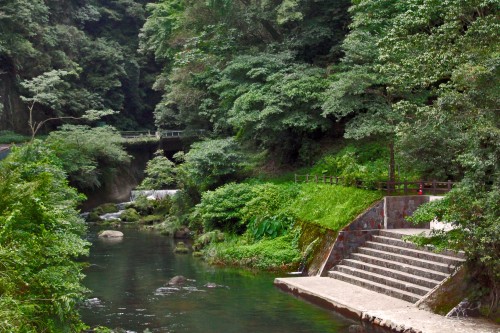 As S. loves boiling his legs in a hot water and I was truly exhausted after long walks we decided to take a break and relax at the foot onsen for a while. To my astonishment, he bought an egg and whilst soaking his feet in the onsen he put an egg into an iron pot and boiled it in a separate small onsen. I was bewildered and couldn’t understand why someone would like to eat an egg, wetting their legs in boiling water in such a blazing day! It turned out that it is a common practice among the local people as presumably it is quite refreshing and brings a lot of energy. And believe me or not – it actually is rejuvenating. 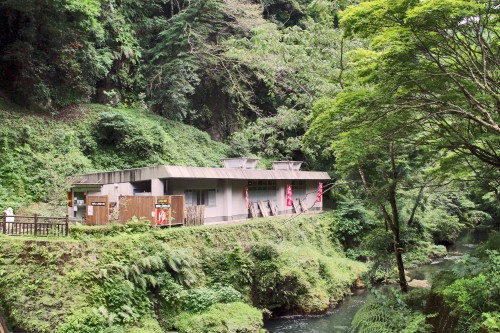 After our legs turned red from the onsen I started exploring the small souvenir “shop”. I became engaged in chatting with an old lady who was selling all these fascinating yet unfamiliar things. My Japanese was very basic and I couldn’t talk much but she was utterly delighted to explain everything to me slowly and as simple as possible. All of the sudden we began playing taketombo, known as a bamboo dragonfly toy for kids that flies up when its shaft is rapidly spun with the flick of your hands. At the beginning it is fairly difficult to play with it but once you learn how to flick your hands it becomes a great fun. 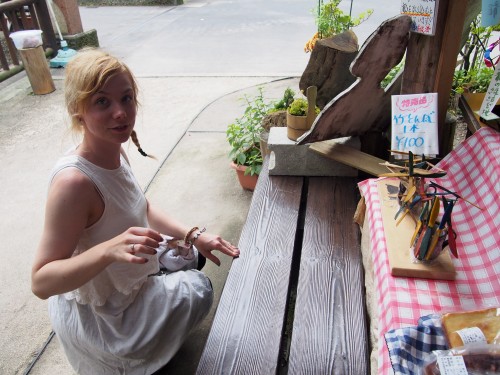 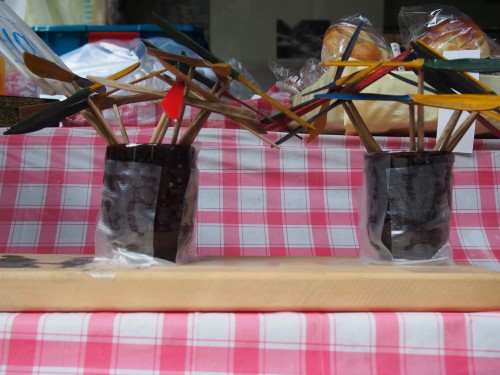 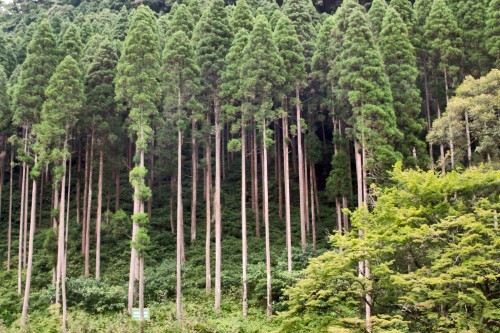 Once S. got involved in the conversation we found out that the wooden traditional house is actually an onsen and a ryokan style hotel mostly designated for married couples. At the same time, it was a historical place where samurai Sakamoto Rioma – an important figure in Japanese history -spent his honey moon with his wife. It is believed to this day that spending a day there will bring a happiness to your marriage.

Unfortunately, we didn’t have a time to try it out. However, we put it on our list of places to visit again.

The best way to get to Hinatayama Onsen is by car. For more information on renting a car in Japan, click here.