Kimono, originally meaning simply “things to wear”, is now used to describe the traditional garments of Japan. There are slightly different styles for men and women, with variation in form, colour and pattern. Since women’s kimono tend towards brighter and more decorative designs, they have come to be seen as pieces of art, both in Japan and the world over. Traditionally made of silk, kimono are precious items usually passed down through relatives and reserved for special occasions. These days it’s possible to find them in other materials such as polyester, which is less expensive and easier to care for. 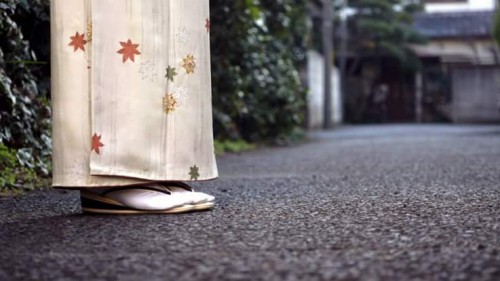 Wearing a kimono is a complicated process with many rules, which are important in order to keep it in place! In the absence of zips or buttons, cotton sashes and ties are used in various ways to arrange the bountiful fabric into the standard form. You might need a few extra pairs of hands and an hour or two before you can walk out in traditional Japanese style! 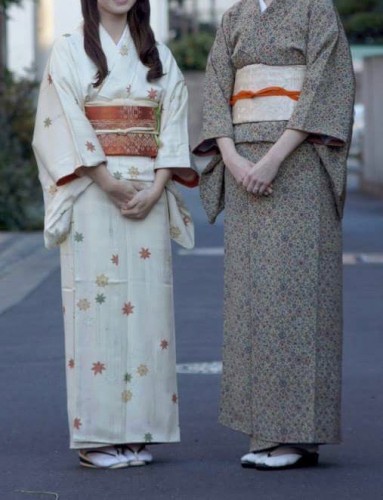 Despite being complicated to put on, kimono are surprisingly practical, with several unexpected features. For example, you might think a they would take up a lot of space hanging up in your wardrobe but in fact, they are stored neatly folded away (there are rules for that too!). Also, they’re size-free and easily adapted to allow for weight and height. Layering and using heavier or lighter materials mean that they can be worn in all weathers. Plus, the ingenious sleeves, with ample space for all your necessities, more than make up for a lack of pockets.

Early Japanese clothing was slightly less extravagant than the kimono styles we see today. During the Nara period (710-794), people wore simple two-piece sets or a one-piece overall. Fashions gradually evolved up until the Heian period (794-1192), when longer styles were developed with the introduction of the straight-line-cut method. This made it easy to make, wear and store, giving rise to its popularity. It wasn’t until the Meiji Era in the mid 19th century, when Japan started to become heavily influenced by Western cultures, that Western styles of dress came to be adopted more and more. 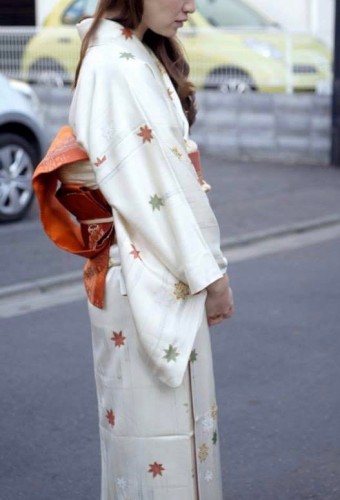 Although modern day dress has taken over for day-to-day wear, kimono are still worn by people of all ages, young and old, throughout the year. Around the festival of “Shichi-go-san” in November, you might see lots of little kids in kimono, going to the temple to celebrate their age. Girls of three and seven and boys at age five go to the temple in kimono with their families to give thanks for reaching these mini-milestones. Their next opportunity might be at their university graduation, where all the female students get to wear furisode, a special kimono for unmarried women with longer sleeves. Of course, weddings are a chance for everyone to dress up, with the bride and groom sometimes opting for traditional dress, as well as relatives and guests. Other kimono-wearers you might spot on the street could be on the way to a tea ceremony or a special event, performers of traditional arts or even sumo wrestlers. Summer is the time for everyone to dust off their yukata, a light cotton style, and enjoy the festivals and firework displays. Tourists can also experience wearing kimono in any of the available shops which provide them to buy or rent at a reasonable price.

Amy hails from a small town in Derbyshire, England, raised in a British/Japanese family. Based in Tokyo the last 3 years she spent the majority of her time escaping to the deep countryside in search of nature, practising traditional Japanese tea ceremony and discovering all the delectable delights Japan has to offer.