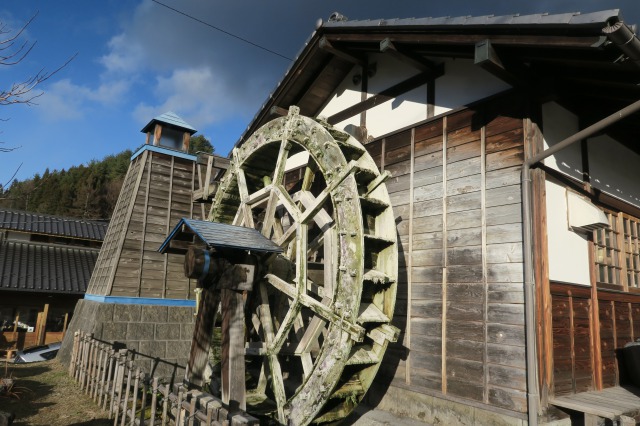 Kuni district: This is what adventures are made of ! 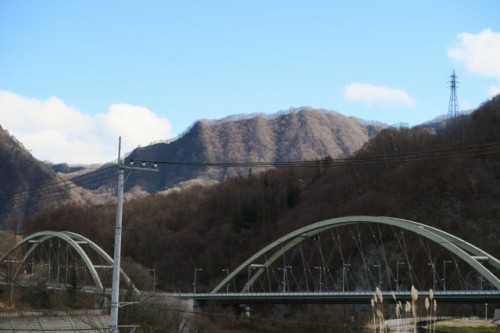 I have been to many small towns and villages across Japan but Kuni district might top them all as being quite possibly the quietest and most remote. The people were scarce but absolutely memorable, there were no convenience stores or anything remotely familiar and it was so unlike Tokyo, I may as well have been in a different country. All in all, this made for a pretty unique, exciting adventure. 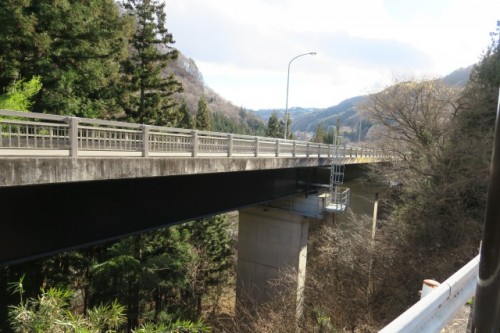 Ooshi station ruins is a railway that had once been used to transport ironstone during world war two. Finding it wasn’t difficult, considering it’s a pretty huge slab or rock consisting of the kind of sturdy, resilient materials and craftsmanship that you just don’t get today. The surrounding mountains and the distant echo of trickling water from the vividly blue stream below only added to the mood and beauty of the place. 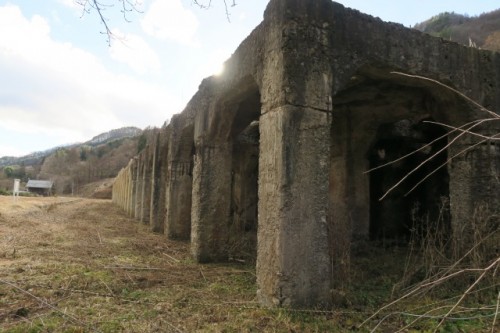 It’s strange to consider how something broken can have so much beauty within it, yet the way it loomed, the way it cast its shadows in the distance and the way the light crept through the holes in it’s cracked architecture made the abandoned structure come to life. Perhaps I wasn’t supposed to, considering there was some rope in places and a fairly large ledge to jump down, but I just couldn’t help wandering into the structure myself to see it first hand. There was a man nearby in a box who appeared to be ‘guarding’ the structure, yet he didn’t seem to mind that I went in. 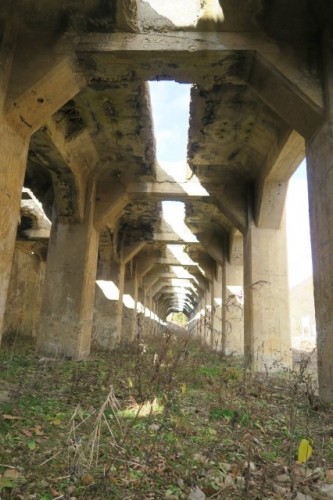 Okaikosan no sato: The big waterwheel

Located down a mystical baron path, across a stunning bridge and amongst the inspiring views of mountains, rivers and fields lies a small slice of Japanese culture with a big atmosphere. Okaikosan no sato holds the Water wheel that is the symbol of this small village. There are a number of huts surrounding the main attraction though, if I’m honest, I couldn’t help but bound straight towards the wheel. 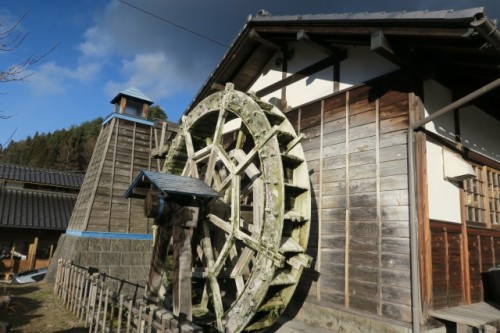 I walked around the edge of the building to get a closer look inside, only for the man working inside to suddenly appear and scare me half to death. If i had more time, I could have stayed and watched him work, grinding various large sacks of, what I assume is silk, by the main hub of the wheel. The room was simple, yet it was this simplicity that inspired me further. It seemed like peaceful work that I’d love to try myself.

Next door is another small hut containing a exhibition, mainly consisting of photos from the late Edo to Meiji period. A separate hut contains local crafts, food and produce for you to buy as well as a lovely, elderly man who you can obtain maps from. The huts are closed on Thursdays and for the New Years holiday, but is otherwise open all year from 9am – 4pm. 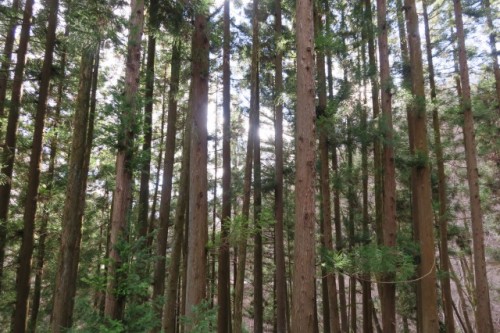 Walking just a little bit further, past Okaikosan no sato and you’ll eventually reach a creepy old house. I was instantly drawn to it. Like a moth to a flame, my heart began to quicken as I took a few daring steps towards the house, so full of clutter bursting from it’s sheds and sporadically spread around the front garden, that I believed someone could still live here. 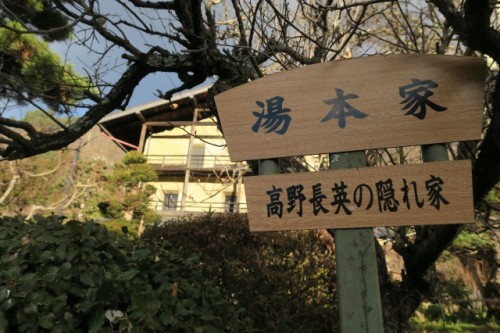 I nervously began to take photos, walking around every edge of the house without actually stepping on the grounds. The whole time, I was nervously looking around. After all, I didn’t know what this house was at first. It had just captured my interest from the road. Someone could come out of the house and yell at me in Japanese, or maybe a concerned neighbour. It was only when I tried to look for my next destination that I realised I was already there. And it was at that moment that I decided to get a little cheeky. 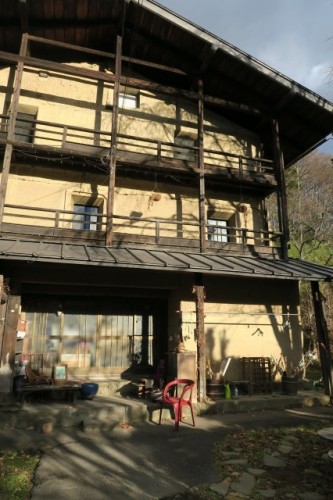 I walked onto the main grounds and close to the front door. I peered into the sheds and watched the old curtains billow from the holes in the house that used to contain windows. I even creeped around the back to get a closer look at another abandoned building lurking just behind it in the shadows. I would have loved to go inside, but of course that’s not possible, especially considering that these are the protected ruins of the house of an old silk-raising farmer. The house was grand, looming, scary and really creepy. If you like abandoned places and want to get some cool photos, this is the place for you. 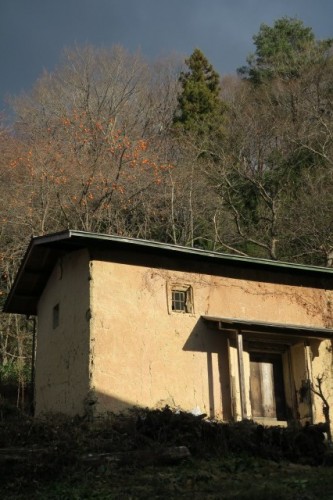 What better way to cap off a day in a peaceful, remote village than to view the entire thing from a distant all-encompassing view point. They weren’t kidding. I could see everywhere I had been from this one spot: the bridge, the whole village and even the individual houses. It really made me think about how tiny this village actually is and reflect upon how the people live and work here. Buildings are simply abandoned, creating stories in my mind that turns each piece into artwork. In my eyes, the landscape would be the perfect place to exhibit some art. 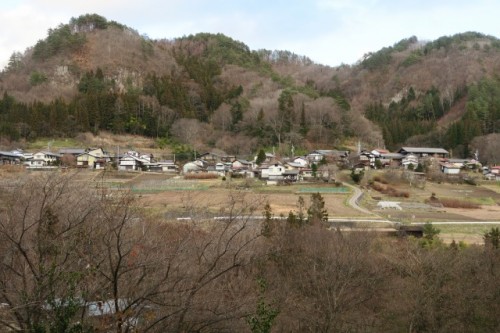 At the viewpoint, there are benches and an information plaque containing both Japanese and English information about the village. As I arrived, the sun began to set, casting it’s rays across the village and lighting it up like some sort of holy entity on a far away hill. The mountains shimmered before engulfing the sun, hiding it behind it’s massive body. People were walking home and a small child rode by on his bike yelling ‘Konnichiwa!’ to me on his way past. 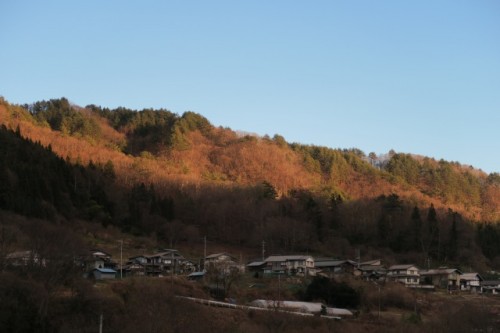 All of these places are within walking distance to each other. Simply take the bus from Naganohara Kusatsu guchi train station to Ooshi in Kuni district and walk five minutes to your first destination, Ooshi no sato. You can return from Minami Oshi Iriguchi bus stop, just 5 minutes walk from Akaiwa Shuraku viewpoint. 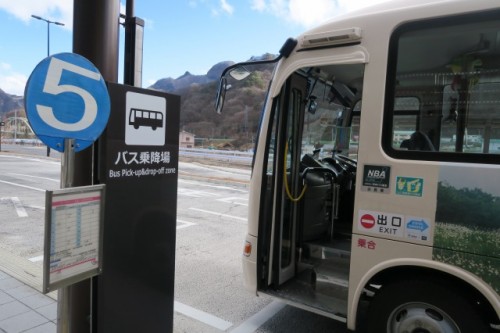 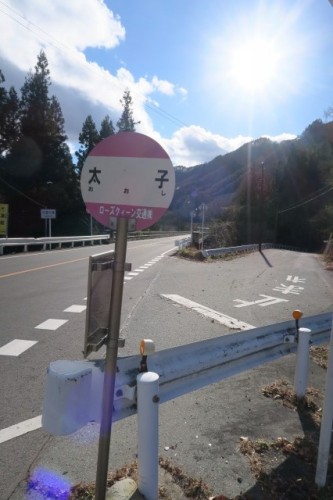 A word of warning

As with most remote places, the bus is really infrequent, perhaps running as little as seven times a day. Be sure to check the bus stop times and plan your time well to avoid some hefty wait times. Additionally, be warned that the buses are small with no announcements as to where you actually are. But do not panic! The driver will ask you where you are going and will simply stop accordingly. There are bells on the bus but you really don’t need to use them. 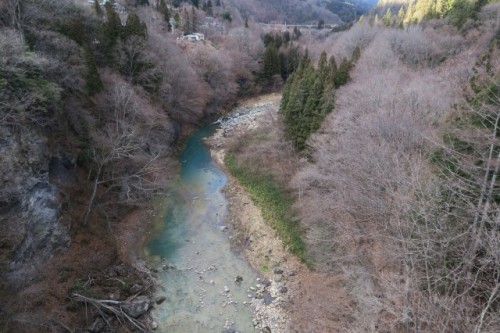 This is what adventures are made of

Kuni district is an exploratory playground. At first, you’ll be lost and not really know entirely where you are going but that’s okay. This is what adventures are made of. You’ll meet country people and make some fantastic stories. Perhaps you will even ask a stranger for directions who will then such sing to you in four different languages, as what happened with me. Additionally, there are more onsens nearby than you would ever need, local food, crafts, information, a famous flower station, museums and even homemade udon nearby. Explore until your hearts content! Welcome to Kuni district! 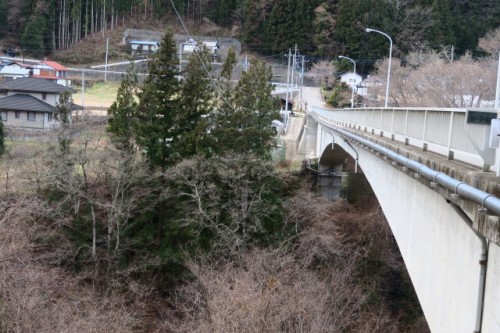