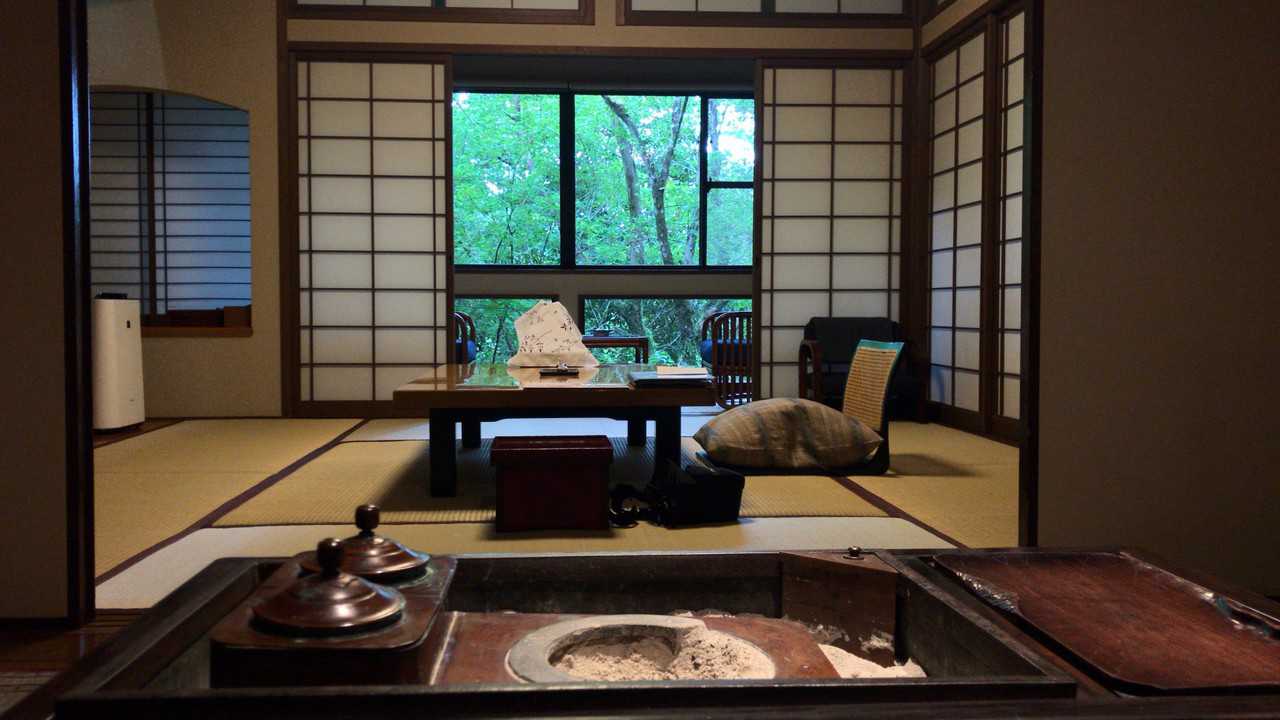 Amagase Onsen in Hita: Stay in a Ryokan

A small city in the western part of Oita Prefecture, the historic town of Hita is notable for its well-preserved old town, which is now a shopping district with many boutiques selling geta (traditional Japanese sandals). The city sits at the fork of two rivers—the Mikuma River and the Kagetsu River—and in the summer months you will find bamboo structures built alongside the flowing riverbed, which are used to catch ayu (sweetfish). The fish is traditionally cooked shioyaki (salt-grilled) style. 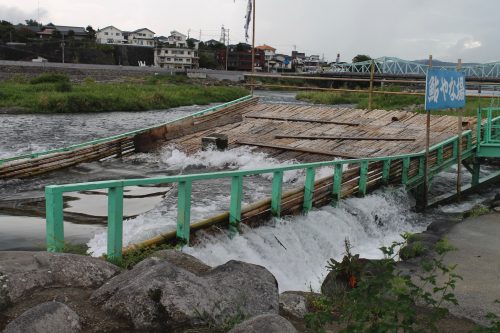 Other local delicacies include yakisoba (stir-fry noodles), which is slightly burned in the region, adding a signature crispiness to the dish. But the gem of Hita is certainly Amagase Onsen, a collection of hot springs tucked into the mountains a short ride from the city center. Any trip to the area deserves a night at one of the dozen ryokan (traditional Japanese inns) that pull from these natural hot spring resources. 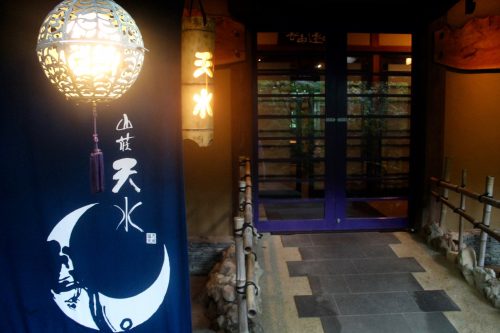 During my visit to Amagase Onsen, I had the opportunity to stay at the luxurious Sanso-Tensui. While only constructed in the last few decades, this ryokan follows a long 1,300-year tradition of onsen in the area and has quickly made a name for itself as one of the most famous ryokan in Kyushu. Its fame comes in large part from a river that runs parallel to inn and leads into Sakura Taki, a stunning waterfall that can be viewed from the premises. This waterfall has been beloved by Japanese writers and artists throughout history. 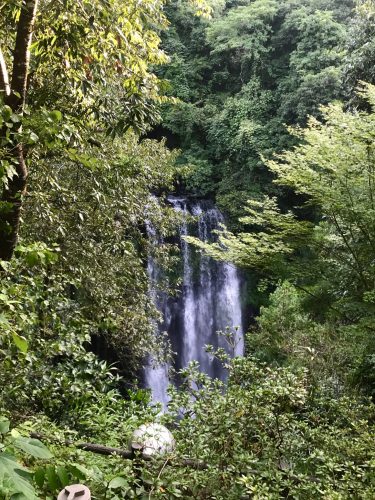 The approach to Sanso-Tensui will bring you along a road winding through deep wooded mountainside. A large stone gate stands at the entrance to the inn, which features a garden filled with moss-covered stones. The grounds of Sanso-Tensui are supposedly at their peak beauty during fall foliage. 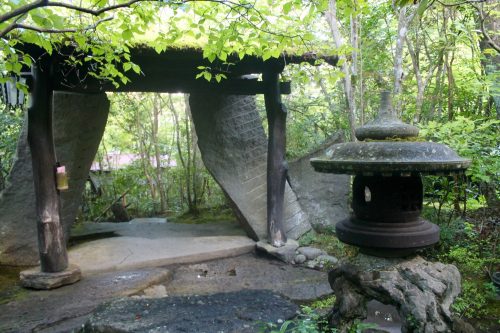 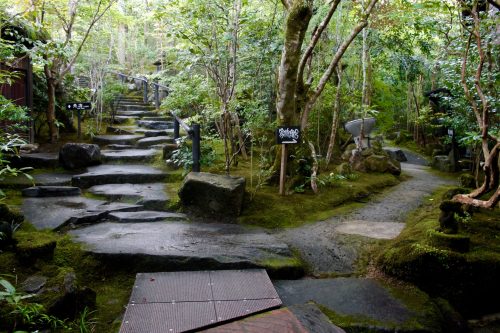 An ashiyu (foot bath) is also hidden among the trees, offering guests a relaxing way to get their toes wet. 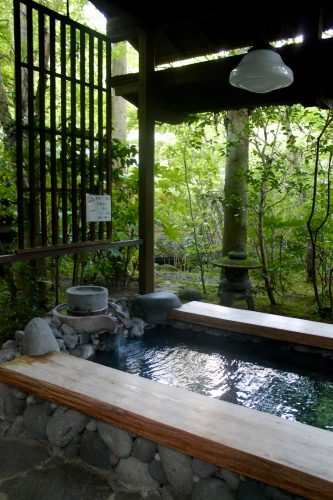 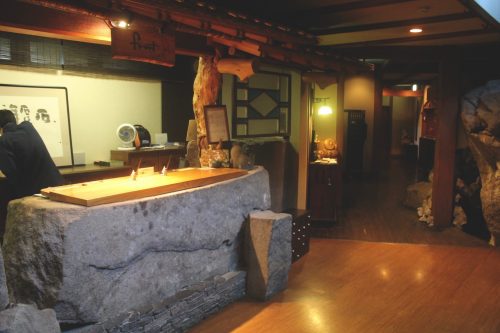 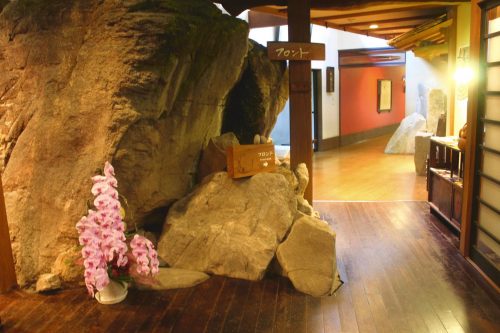 Upon check-in, you’ll be taken to a lounge to enjoy a cup of green tea and wagashi (traditional Japanese sweets) made on location. The bar has wide window overlooking the surrounding forest and a river in the distance. 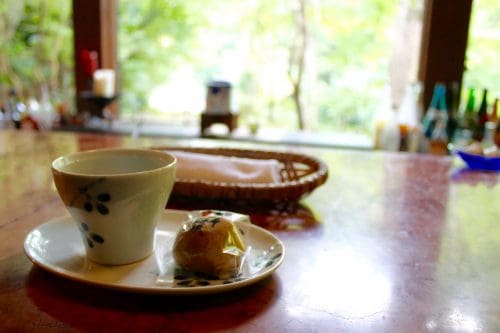 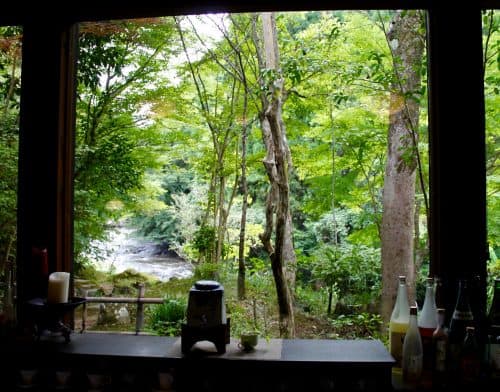 All the rotemburo (outdoor baths) on the premises feature views of this same river. Guests of the hotel have the option to reserve the hotel’s private baths for no extra charge. A great option for families and couples, each one of the five private baths has its own theme and includes a view of the flowing river. I had the chance to try two of the baths, my favorite being the novel kamayu (iron pot bath). 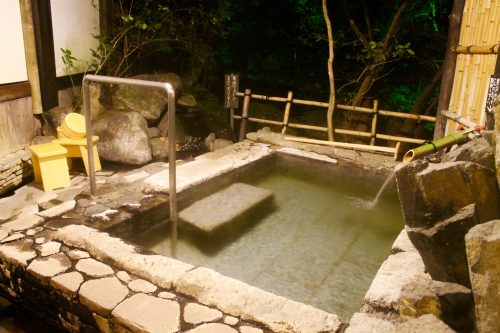 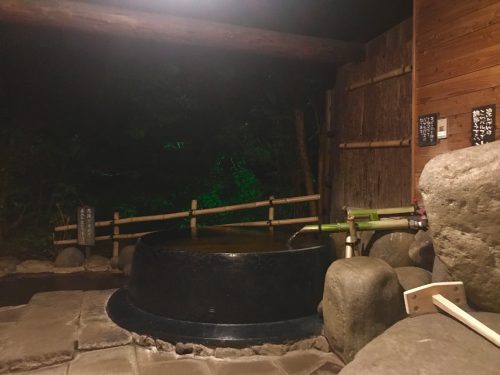 My favorite bath, however, was the rotemburo, which offers a stunning view of the waterfall, peeking through the forest trees, from a perch up on the mountainside. The sound of the waterfall is a soothing companion to the warm onsen bath water, and otherwise still natural surroundings. 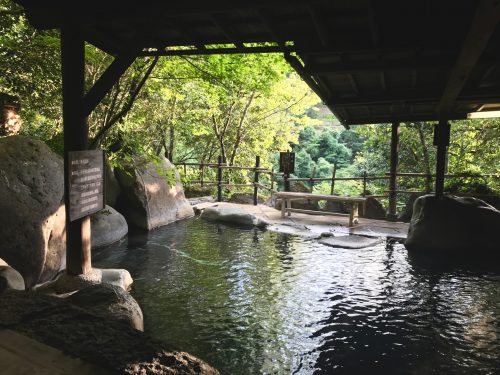 In addition to these onsen facilities, the ryokan has traditional Japanese-style tatami rooms with views of the surrounding forest. These spacious rooms are where dinner and breakfast are served. 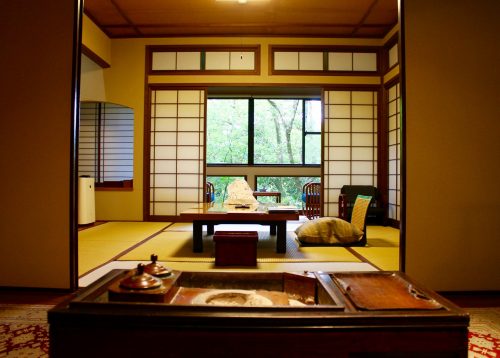 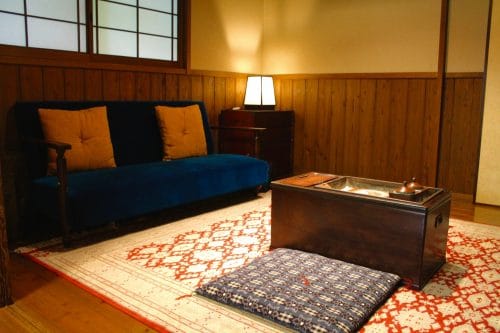 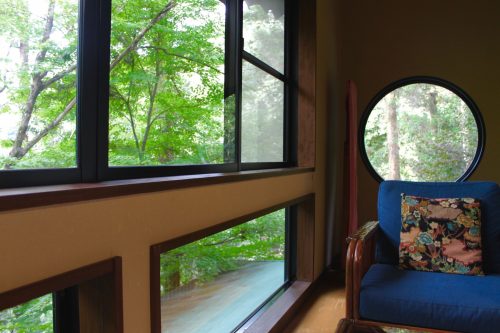 During each meal, you’ll be personally attended to by one of the ryokan staff and enjoy a high-end multi-course meal, all included in the price of the reservation. The elegant plating of these courses take inspiration from the Hita region, with hot stones and dried fruit shells serving as the base for some of the dishes. 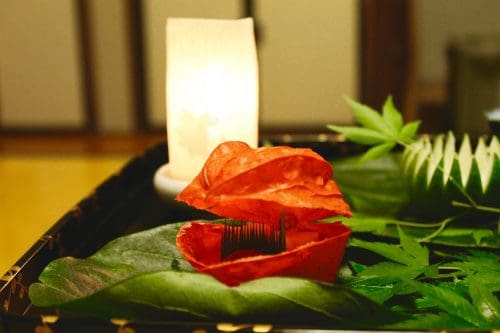 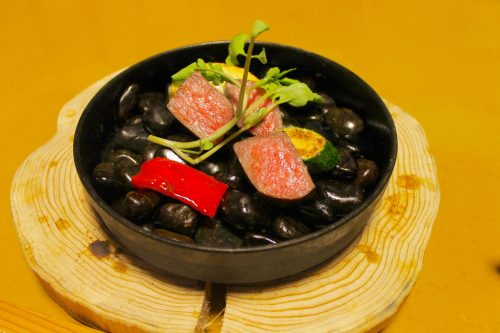 The meal included ayu caught in a nearby river. The ryokan attendant remarked that the fish was so fresh it did not need to be grilled the conventional way using heavy salting. 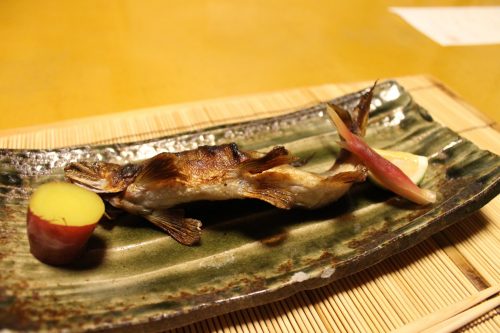 One of the most luxurious items on the menu, however, was okra and sea bream encased in a raindrop cake and place in a glass spherical container. The water for the cake was sourced from a renowned hot spring in Amagase Onsen. 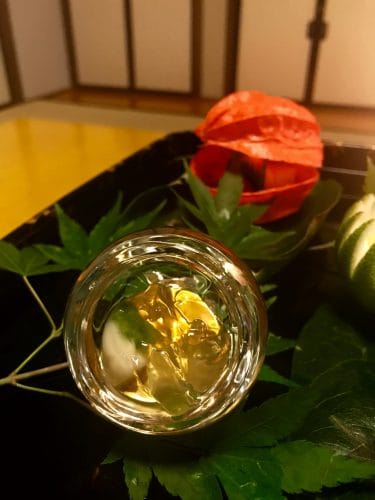 The ryokan also serves traditional Japanese breakfast to its guest, but since I had to depart early the next morning they kindly packaged my breakfast as an obento (lunch box) to go. 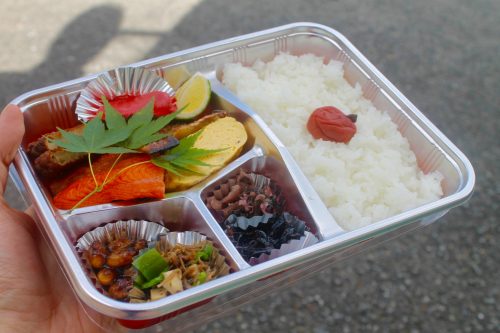 If you’re considering a trip to Amagase Onsen the best route is through Hita Station. A great method of transportation to Hita is via Yufuin. An onsen hub in its own right, the small town is filled with cool boutiques and has a gorgeous tourism information center and train station that services the novelty Yufuin no Mori train line. 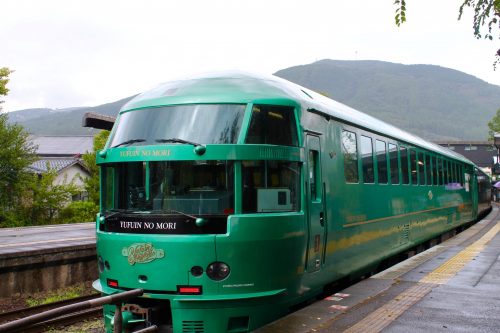 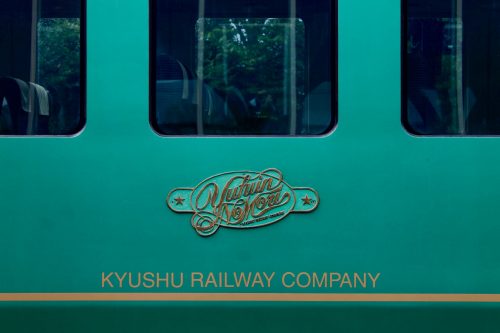 With a retro, dark forest green exterior, this train will take you through the forests of the Bungo region and past its open rice fields for a scenic ride to Hita Station. 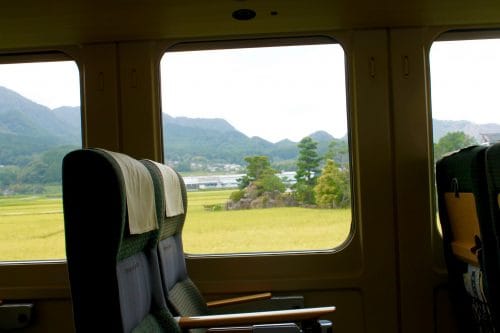 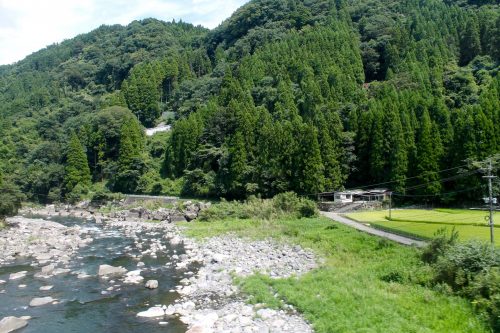