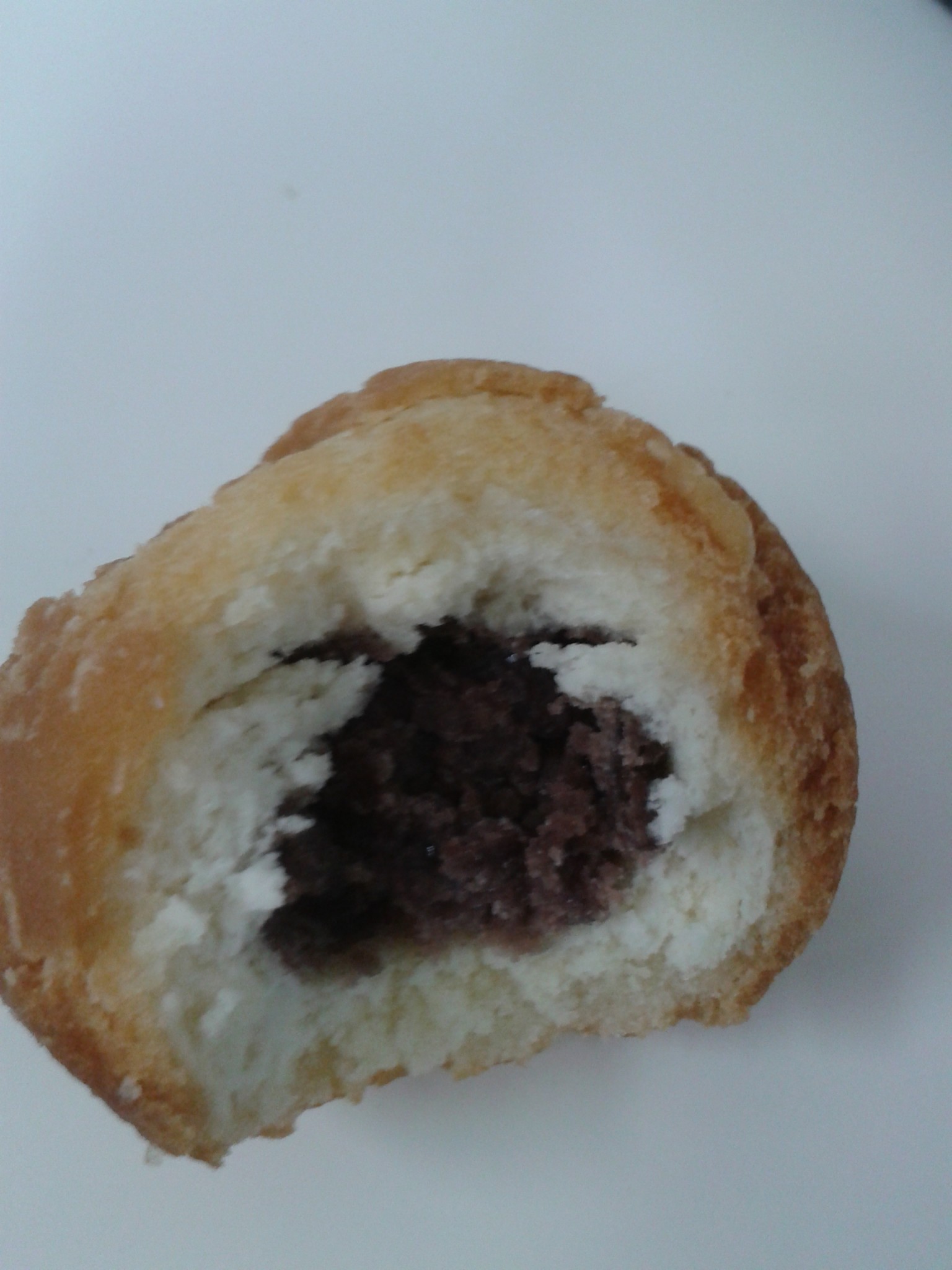 Japanese Desserts and Sweets: The Main difference from Western Sweets

The Search For New Japanese Sweets

The Japanese dessert “mochi” was the only one I had heard of before coming to Japan (unless you include Japan’s fabled variety of Kit-Kat flavours).  The only form of Mochi that I had been able to try in the West was a factory-made saccharine affair, which firstly had me thinking that Japan had not attained a firm grasp on the sweets industry. It was not until I heard of Japan’s booming souvenir industry that I realised that I had simply eaten an ill representation. 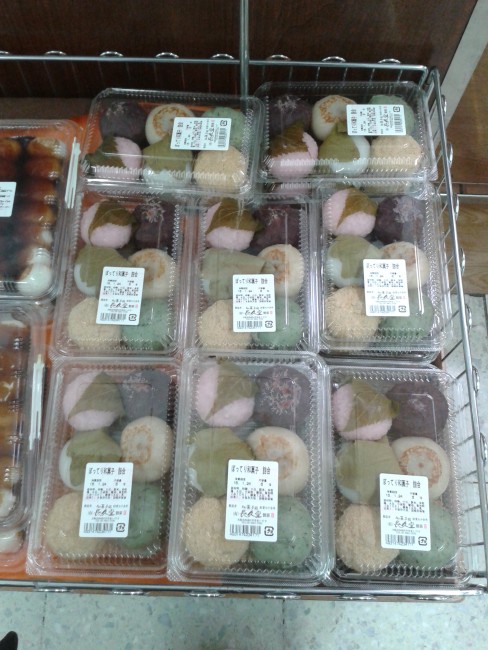 As a food-lover, I was determined to uncover a true representation. I was already familiar with Calpis –the yoghurt-soda soft drink, sometimes exported as Calpico- and I continue to rank that as one of the nicest sweet things I have had. Though it is not a sweet per se, Calpis gave me hope that there could be good in the world of Japanese sweets. 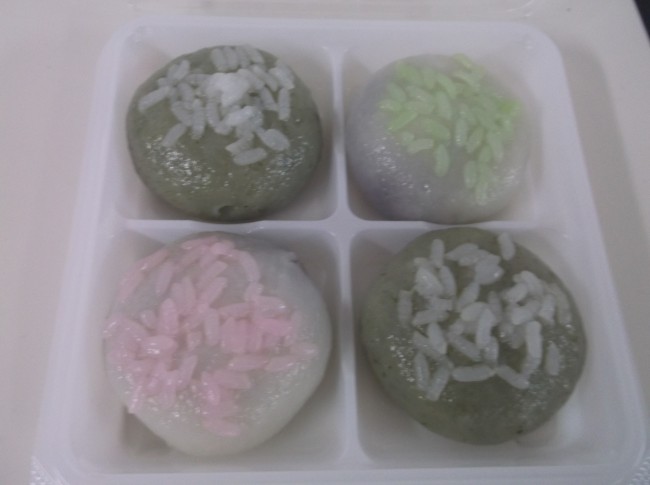 Rice is Rice!  Dango or Mochi

The sweet that first lured me in was Hanami Dango.  It’s a sweet that is to celebrate the colours of Hanami – the celebration during which Japanese people enjoy the beautiful colours of cherry blossoms in bloom.  I was told the pink piece represents Sakura blossom, the green is fresh life, and the white is snow.

As I ate it I said “This Mochi is good; far better than the stuff I have tried in England.”
I was met with a slight wince; “It’s not Mochi.”
“It’s not Mochi?”
“No, Mochi is different.”
“Oh, what’s the difference?”
“Mochi is made from rice. Dango is rice-flour.”

Rice is rice! In the mind of a westerner, that is the same; the key ingredients have the same origin, the texture and taste are nearly identical. Thinking about this, I realised that the same could be said of fudge and toffee, treacle and caramel. The nuances in taste and the knowledge of key ingredients are there if you have grown up with it. But nomenclature is redundant in the face of actual taste and pleasure taken from the sweet, and I can say that the typical Japanese rice-based sweet –whether it be Mochi or Dango– is really very good. It has a real homely feeling to it, the same way that fudge or treacle might. 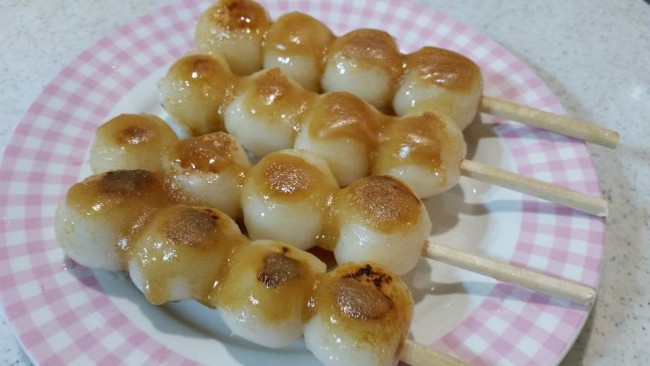 The Subtle Differences in Japanese Sweets

These Wagashi  –Dango, Mochi and other Japanese traditional sweets- aren’t always plain, glutinous-rice flavoured, but are often partnered with another typically Japanese taste. These tastes are commonly Azuki, Matcha, sweet soy sauce, or Kinako. On top of that, the sweet may take many forms.  The Azuki may be whole, or in a paste; it may be a ball, it may be a triangle; it may have a filing, or it may be coated. Recently, someone was describing to me her favourite Wagashi, Ohagi.  She said it is Mochi with Anko: red bean paste.  I asked if the Anko was inside, and she said “that would make it Daifuku, Ohagi has the Anko on the outside.” These differences seem small but Japan is a culture based on minor details and simplicity.  This aesthetic is called Wabi-sabi, which is the perfection in imperfection and nature. In my view Wagashi is very much a ripple from Wabi-sabi; simple forms and simple, hearty flavours.

My first port-of-call in Japan was Okayama, home to Momotaro –the boy born from a peach, who grew up to be an Oni-slaying hero. Momotaro reintroduced me to the Japanese souvenir industry.  Every prefecture is famous for a sweet, fruit, or some kind of souvenir, and typically each prefecture is represented by a character. Momotaro is the character for Okayama, and he comes bearing Kibi Dango, which seems to be entirely unique to Okayama. I don’t remember the last time that I saw a friendly character used to advertise Western confectionery-bar except perhaps Red and Green the M&Ms.  However, they have actually always come across as characters I’d loathe to spend time with- whereas Japan lives up to it’s reputation of celebrating the cute.

Western sweets tend to have more variety, but they do have the upper-hand in that trade between many countries and cultures has been longer-established. A lot of Western sweets can be described to be based in bread: Sweet rolls, doughnuts, croissant, etc. If not bread, then there is a plethora of cakes. all taking different forms, tastes, and nuances from the countries they originate from.

It could be argued that these cakey, bready sweets are distant relatives of Wagashi – the main difference being the grain used. Some might say the main difference in Japanese and Western sweets is the fact that Japanese sweets rely mostly on native, natural ingredients, whereas Western sweets naturally have a wider range of ingredients.  Natural, due to the historical fact that England and many European countries decided to explore and take back a bounty of ingredients, among other things. Europe’s introduction to chocolate is arguably the biggest thing that has happened in the world of sweets, and European chocolate has taken rein as the most popular confectionery globally.

Japan is no exception, as it is home to many amazing chocolates. They are really deep in flavour and seem to understand balance in taste. Sadly, that chocolate doesn’t always make it to be partnered with other Western sweets. I cannot count the times that I have bought cakes under the assumption that they were chocolate flavour only to find that they have been flavoured with the Japanese favourite Anko. 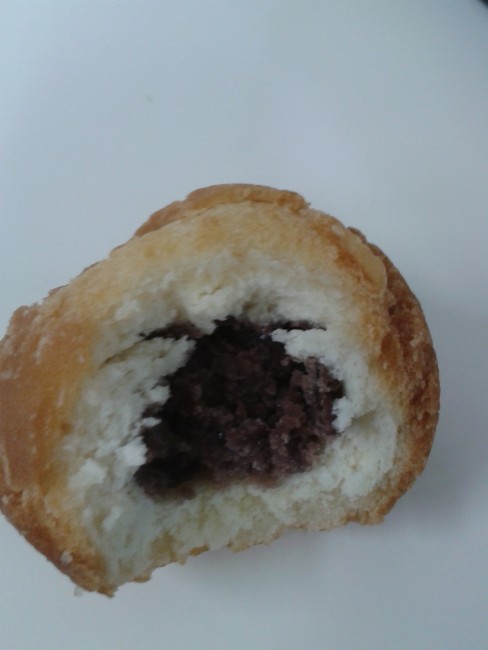 That being said, the times that I have bought cakes or doughnuts in the knowledge that they have Anko, the pairing has been serendipitous. Fresh doughnuts filled with Anko have swiftly become a favourite for me; crispy outer-dough, soft inner-dough, and a sweet bean-paste middle. Perfection.

Due to the West’s days of travel and conquering, there are more things available; gummy sweets, cakes, hard boiled sweets, chocolate, and so on. And of course Japan has their own take on all of these, too. Japan introduced me to Baumkuchen, a  German cake that is made on a large spit and then sliced into rings. It is everywhere in Japan, and I thought it was a Japanese original until I heard the name, and was told it was indeed German. Having been to Germany I can’t say that I recollect ever seeing such a cake but I have been told that the popularity is down to German ex-pat Karl Joseph Wilhelm Juchheim.  He started making and selling the cake in Hiroshima just after WW1 and since then popularity has spread, so you can expect to see it in pretty much any combini or super market.

A similar instance happened with カステラ (Kasutera, or Castella). Castella is a kind of Madeira cake that was brought over when the Portuguese, also bringing guns and Christianity, visited Japan in the 16th century. Needless to say, cakes and guns took off in Japan with greater vigour than religion did. Much like Baumkuchen, Castella is very popular and found in a lot of places. Both cakes are often made fresh and are both quite delicious.

Hard-boiled sweets are ever-popular too. If you’re a fan of Japanese animation team Studio Ghibli, then you may know Grave of the Fireflies and the ever-present Fruit Drops featured in that movie. They have been around since the 1900s, and to this day are still sold in their classic tin-can packaging. They most commonly just go by the name of “drops” or by the brand name Sakuma Drops. They’re not really anything to write home about, but they do have that comfortable feeling of being at your grandma’s house when she keeps giving you boiled sweets. Sadly, my experience with Japanese gummy sweets has been that the packs are very small and the price is rather big.  Yet, you may find some Japanese-fusion flavours, such as the very popular Umeboshi. 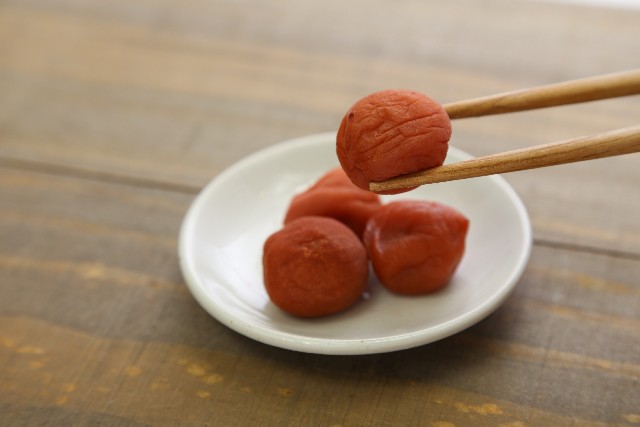 Umeboshi isn’t quite a sweet per se, but perhaps a kind of pickle. It is served with many meals, and has a range of flavours. Umeboshi is dried fragrant plum. I have been told of Japanese grandmothers collecting many plums and sun-drying them on special wicker bowls. There must be some other step in the process that people forget to tell me, as they can range from being very sour, to very sweet and flavoured with honey; sometimes they are very fragrant, sometimes quite fruity. Umeboshi is a Japanese classic, and if you find that you like the diverse –usually quite sour- taste, you’ll find that a lot of Japanese people will think you are marvelous. However, if you don’t like the taste, don’t lie about it; you may find that your Japanese friends will order some food for you at some point with a helping of umeboshi…

All in all, the traditional Wagashi are kind of on their own island –much like Japan its self- while some of the traditional flavours are bridging the gap to the Western sweet world. In that bridge there are some truly amazing things to try, such as chocolate cream Yatsuhashi. Of course some things will stay unique to the West, and some things will stay solely Japanese. 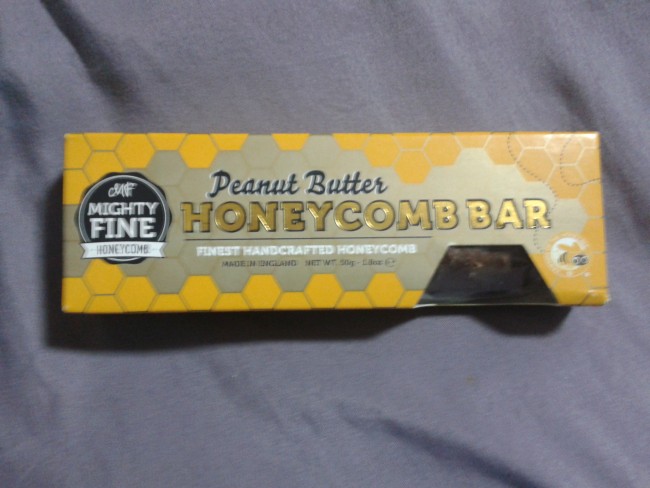 I’m just waiting for Japan to catch wind of cinder toffee –aka honey-comb- as the West seems to just want to throw peanut butter on everything, I think some Japanese style finesse and chocolate would do the sweet good!