Mount Shosha, the Great Hiking Spot if you visit Himeji!

Himeji is undoubtedly most famous for its castle. With its grand scale and wonderful gardens, especially during the spring when the cherry blossoms come alive, the fame is rightly deserved and this castle a must see. 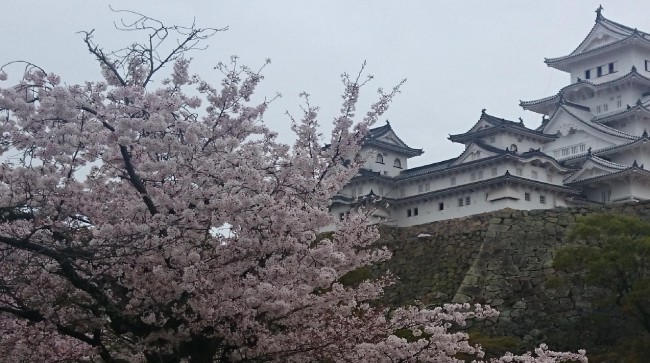 However, hiking Himeji reveals another among the cities hosted must-see locations, just as wonderful but in a more relaxed, peaceful way.

Mount Shosha, how to get there

Many a temple are found upon Shosha-zan, or mount Shosha, a mountain gracing the Himeji city outskirts. It is accessible via cable car or a hiking trail. The trail is very fun and not at all difficult, so if you contemplate between the two at all… take the trail!

As mount Shosha rests quite a ways away from Himeji station, it is most accessible via bus. From Himeji station take a number 8 bus from bay 10 bound for Shosha-zan cable car station. The bus ride takes about 30 minutes and costs about 270 yen. 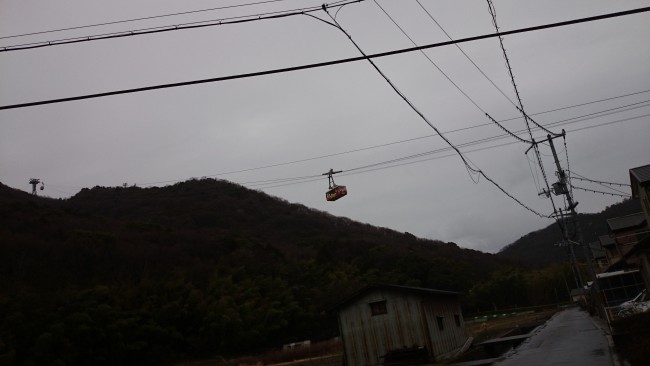 The better alternative is via the hiking trail. This relatively simple trail takes around 1 to 2 hours, depending on your pace. 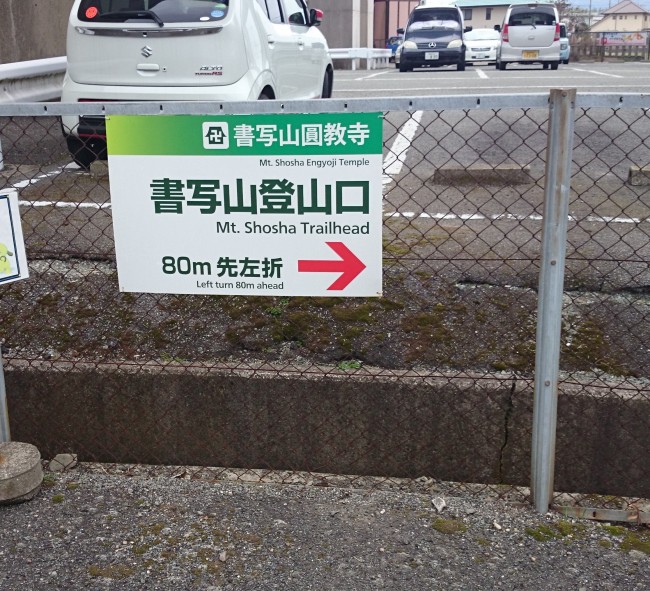 The trail head is reached via a very small and well signed stroll through the town. 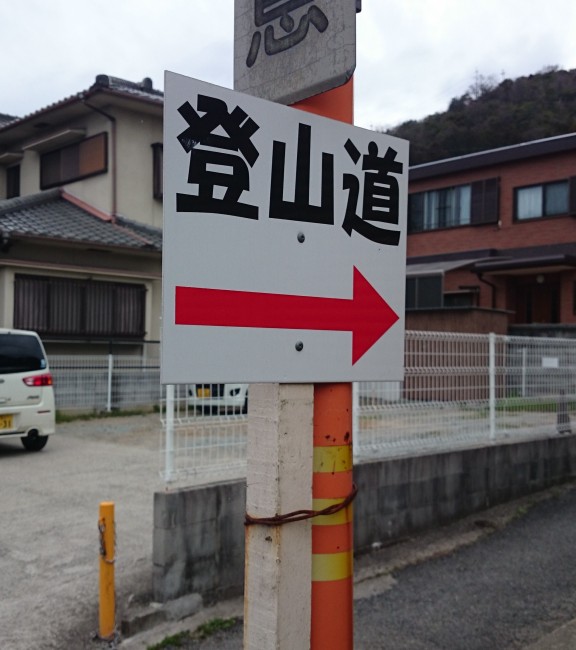 This sign means “mountain climbing road”, so it points towards where we want to go! 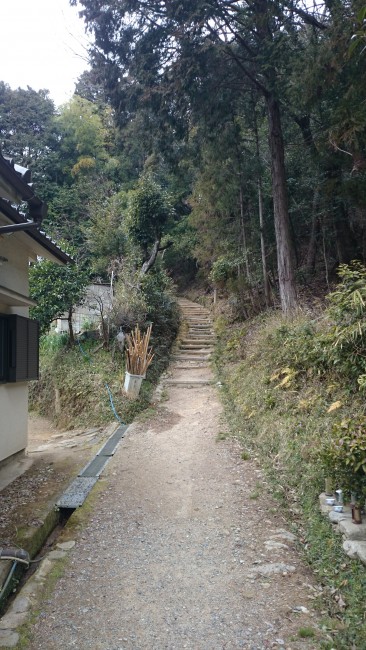 Don’t forget to grab yourself a bamboo stick for the hike up. Before setting off, give it a tap on the ground (like Gandalf). It’s fun to make a musical melody whilst you climb. My partner could even blow a note with hers like it was a shakuhachi. 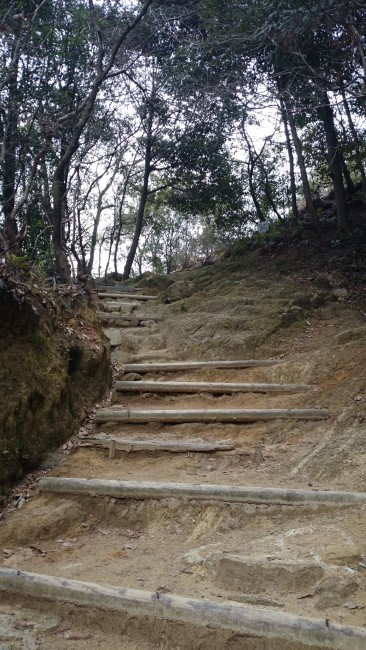 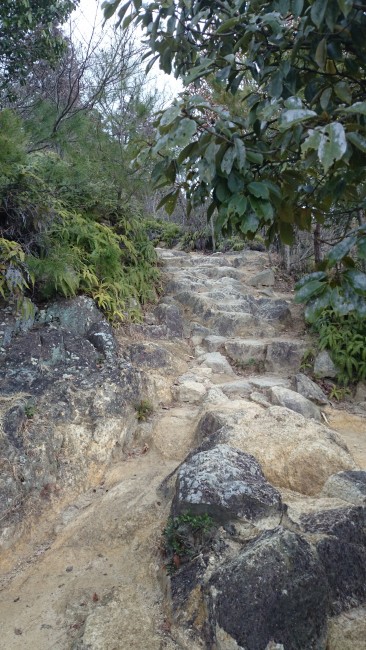 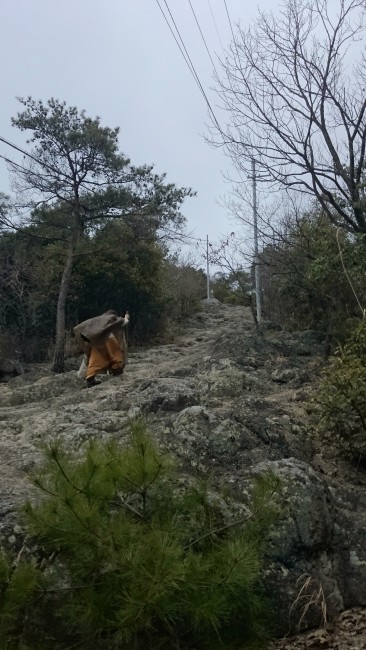 The path alternates between built-up stairs, stairs made from rocks, and just climbing up rocks. Often the rock paths are just shortcuts around longer, built-up areas; so there isn’t any need to climb the rocks, if that’s not your thing. 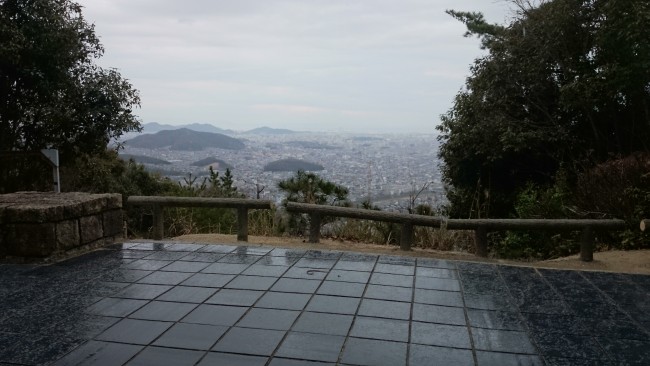 Near the top of the trail before the cable car station, there’s a little park area that’s good for resting at – not to mention the view. 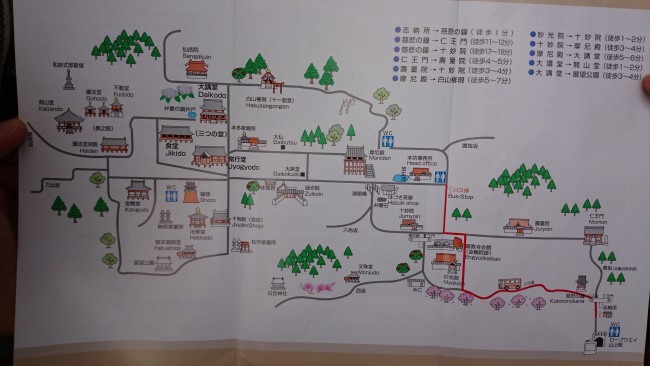 What to see in Mount Shosha

A little further ahead we will reach the cable car station. If you didn’t already get one, grab a paper map from inside the station to make your Shosa-zan exploration more enjoyable. The entrance fee is 500 yen, but as you can see on the map, there are many things to see. 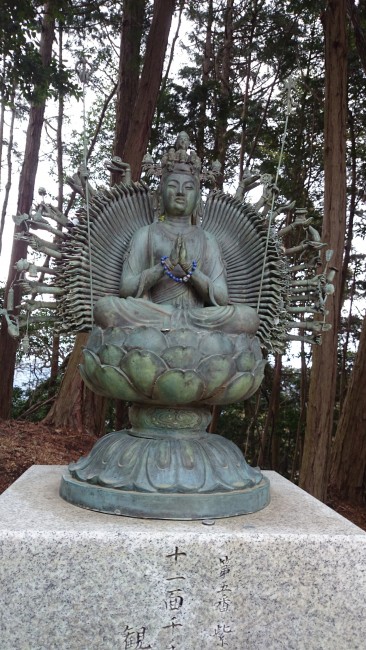 The first thing you can do is head straight ahead towards the Niomon gate. On your left hangs a giant bell which you can hit with the hanging log. Let’s make a fantastically loud entrance! The path up to Niomon is really scenic and filled with these statues. They are very intricate – this one has over 100 hands. 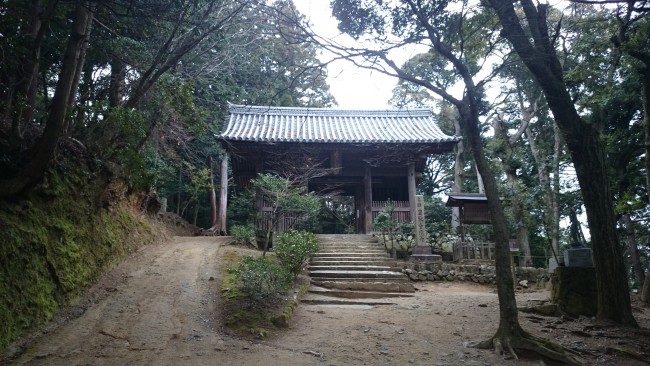 The Niomon gate marks entry into Shosha-zan. You can take any route you wish around the mountain for the numerous temple grounds and buildings, some paths are simple while some are steep; filled with tree roots that make using your hands almost necessary. To be honest, I don’t remember the route I took, but I think that’s testament to the ease of just getting lost wandering around up here. 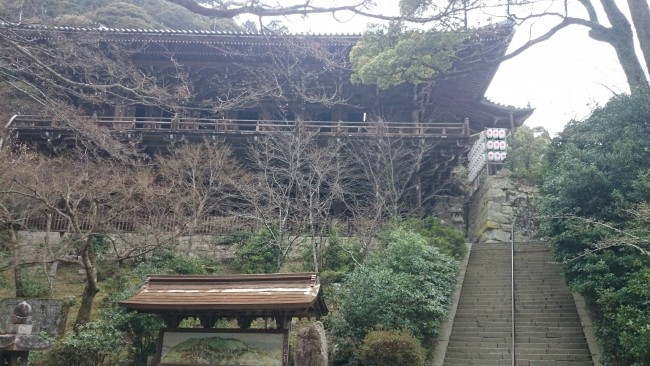 The most impressive temple here is called Maniden. It has a Kiyo-Mizu-Dera vibe (Kyoto’s famous wooden temple) with its wooden balcony overlooking the trees. 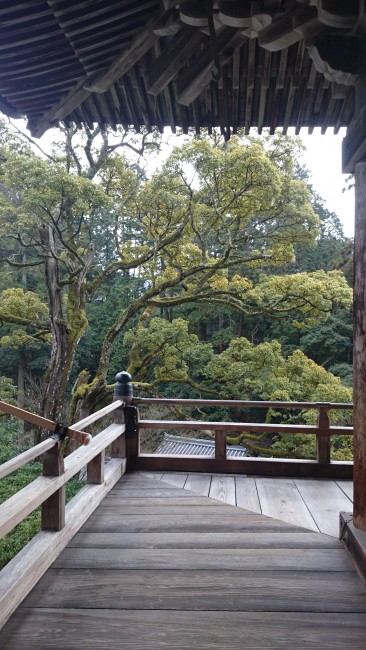 The balcony is accessible so you can enjoy the view up close. There are signs saying “No resting”. Okay, I understand that; don’t go to sleep on the balcony. “No stretching”… why? It seems like an odd and random rule, if you ask me. 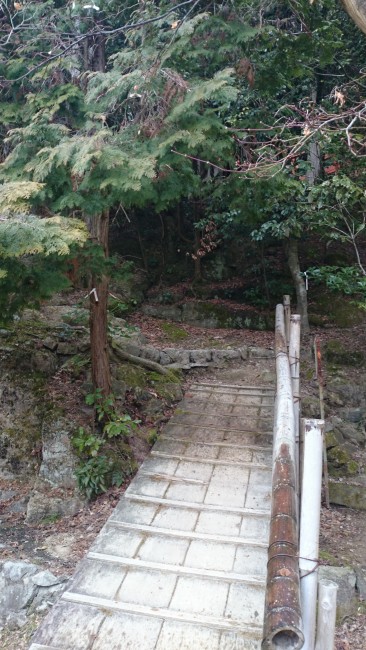 Once you are ready to leave Maniden you can continue your tour of Shosha-zan by heading around the back of the temple. One path goes up into the hills, while the other goes directly behind the temple. Both paths eventually join up so it’s really just a choice of your starting point, and if you would like hiking another hill. 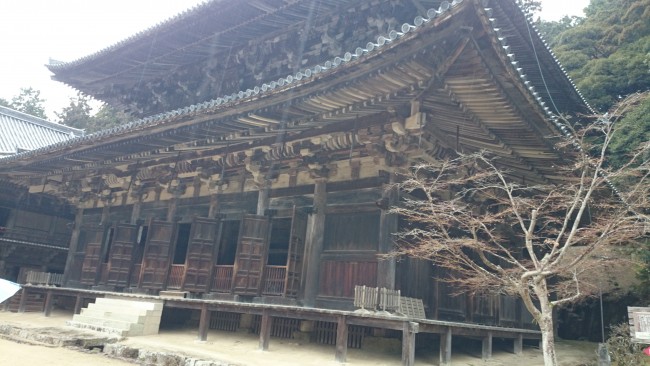 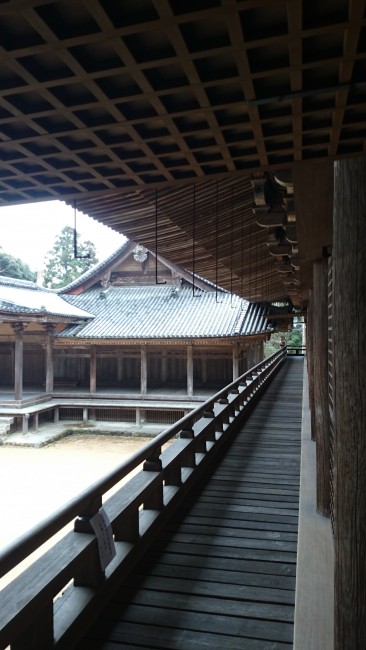 We eventually reach the area marked on the map as 三つの食堂. Here stand the three famous temple halls called Jikido, Daikodo and Jyogyodo. You might recognize them. How? Due to Shosha-zan’s authentic look and relative isolation, it makes for a great set location. Many Japanese period dramas are often filmed here, so these buildings appear in many films. The most famous film that had scenes shot here might be Tom Cruise’s “The Last Samurai”. 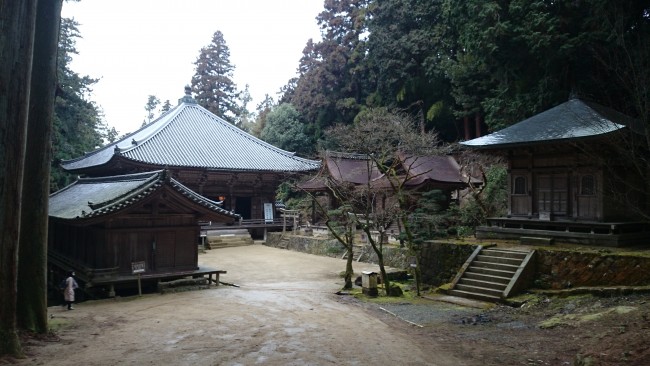 A little bit behind the three temples we find another temple called Kaizando. Inside Kaizando sits a large Buddha statue, part of the pilgrimage series between all the Buddha statues within the Kinki area.

There are many more buildings and sights hiking Mount Shosha, but I will leave finding them to you – see them for yourselves! Shosha-zan is supposedly beautiful and different throughout the seasons, so I hope to go back there again in autumn. 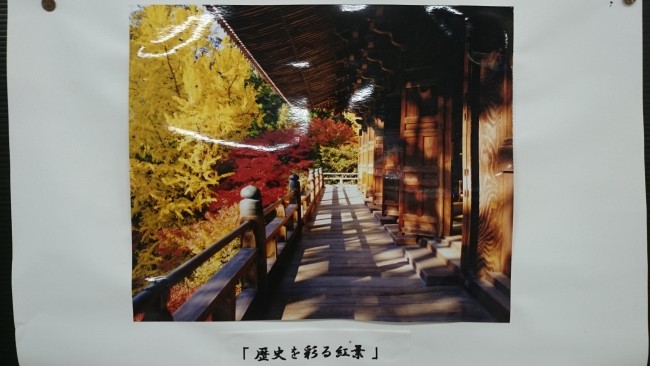 I hope you will forgive me for a photo of a photo… but let’s do our best to see the real thing this autumn! I hope to see you there.