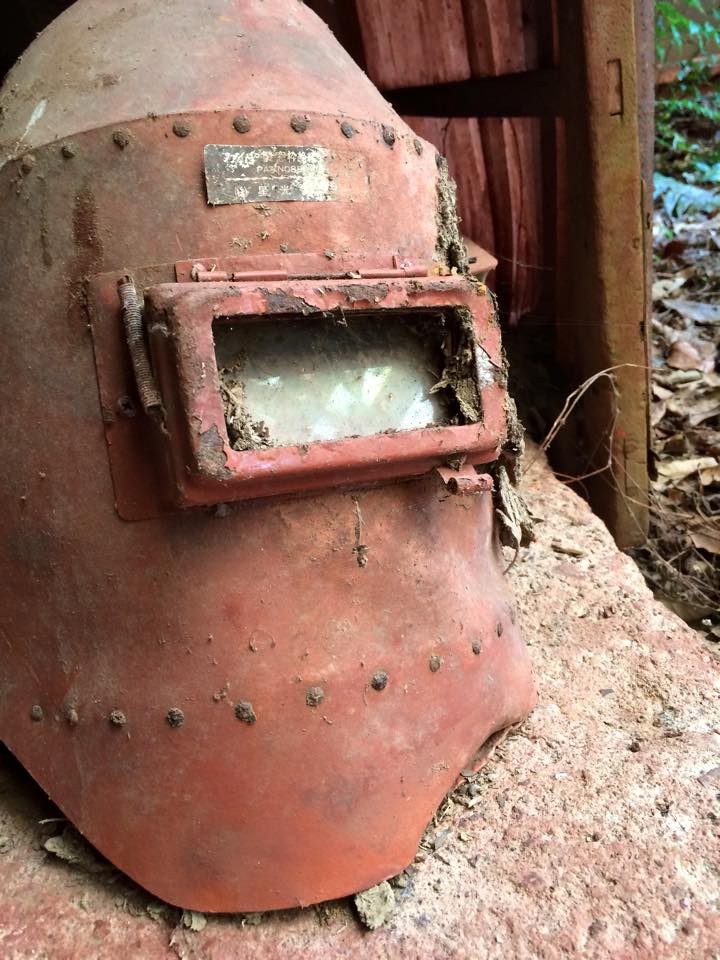 An abandoned ocher factory in Okayama

Wearied of teaching and a car ride numb to our bottoms, our senses were straining to discern a special cistern of mental nourishment. The wall scroll spread of mountains and river, strangely empty of joyed sounds on a sunny spring day, showed no industrial scab. When we stopped our minds were still bearing towards nothing but the green wilderness of rural Okayama. Somewhere uphill, sat a little abandoned Japanese gem of a factory. 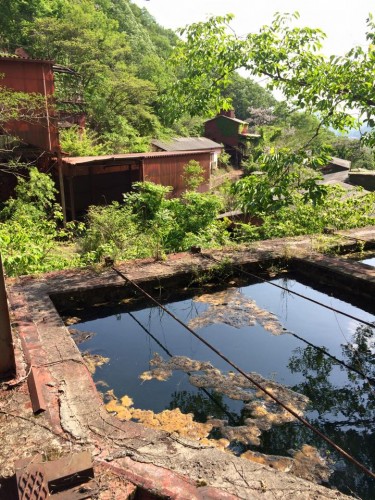 The factory was a hillside abandoned outpost, a way station of weighted wares and rote textile machinery left sleeping with workers spirited away. Red roofs of rain-decayed sheet metal plates continued further afield. Undisturbed red became a delicate brushstroke in the fine interstices between complete green – ocher that stains to the touch. Like the terraced rice fields in Japan’s locales of less arable land, this was a bizarre Japanese hybrid of industry transplanted to terraces in the Japanese midlands, smothered to death in a place without smoggy vapors to sustain it. 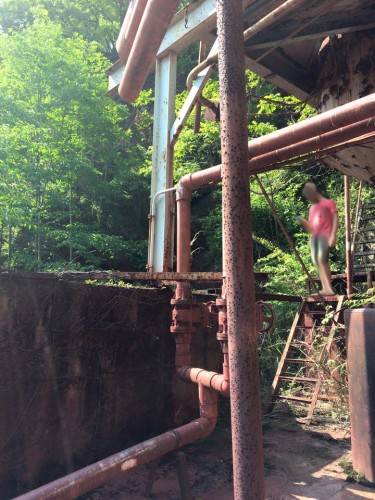 We first went to the vats, the silos and their platform terracing. Furthest up the hillside of any sector of the fallen factory, it slouched the least against the hillside and swept our open eyes on its industrial brow to a wide sweating world. As we sloped off the factory’s main road to its little water towers, we zig-zagged up the grate-plates of the stairs to look into the lip of the unclean gurgle-pits. Collected in the basin was still water, with a surprisingly clinically-suppressed lack of stench. The openness was a good sunbathing spot, save the bathing. After glimpsing faraway hills, we gingerly returned away from the flaking floor of the platforms. 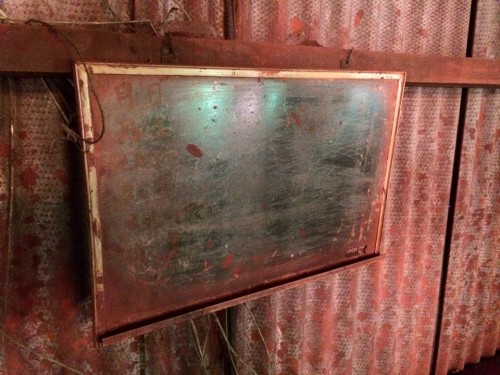 If a single filament light bulb were to pop in the next building down the hill, no one would have noticed. Such a disturbance was unlikely, as a settled stain of red was untouched. Nothing shattered, rusted or gutted laid in our way. This intrusion was to a structure of open grate walkways and a centrally-placed power system of sorts. Though resembling a warehouse, its design opened without walls to the side. Here, a fresh clod-hollowed earth operated as a wall. Out the earth, a sizable tube siphoned a stream into the tiny red plant. A lower level reached by ladder allowed surveillance of the water that burbled from the still lower earthen depths. 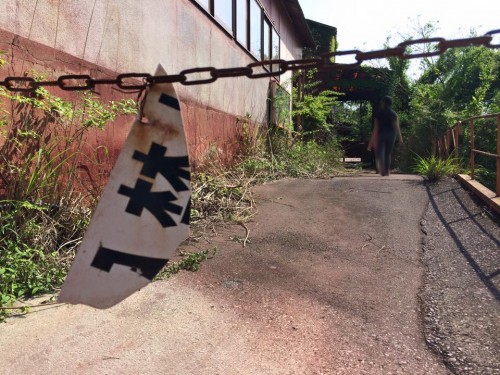 Red slack-strung chains with chip-off signs marked the whimpering “w” of an incomplete warning at the next offshoot. Just beyond, a parched earth driveway lead to a super eight barnyard. Contained within was a loft space led to by a stairwell bouncing in a ghostly levitation act away from the just dirt floor. A door to a clearing was bound by a knot chain fixed firmly in a padlock on the far wall. A slit promising a secret pleasance of lemon afternoon light was a sour hindrance, as it seemed there would be no chance to pass. 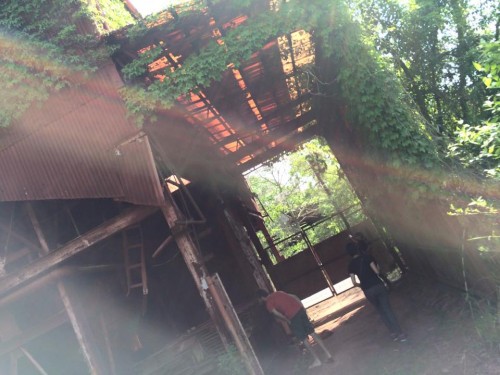 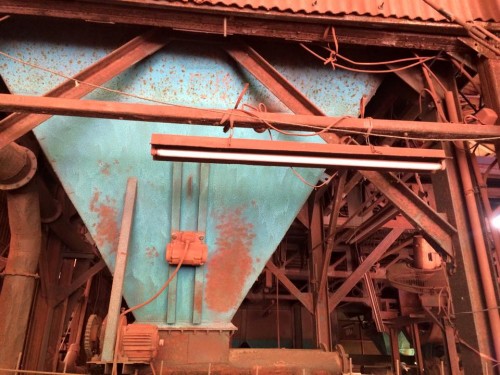 Not passing up any chances to enter and attempting to climb the stairs I noticed an opening to the other side. Though again the opening was too unopened, a narrow squeeze fit for night time scurry creatures widened just so against the outer wall. Passing, we tread to the innermost post of the abandoned.

The clearing was a fit for the characteristic blue collar vans sputtering fumes around towns elsewhere. Now, green has grown in tufts just enough to hide a nest of crawling insects. They’d doubtless pool out and finger in a thousand legs to the nearby storehouse, if there was anything to grip in drooling mandibles. 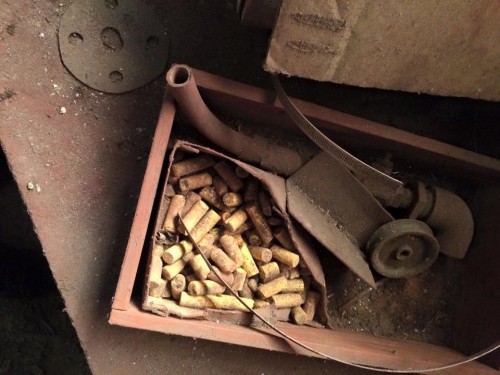 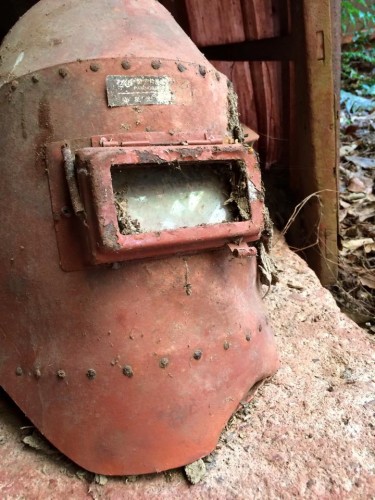 The ruddy red of a fallen salaryman’s dead-night dreams sleepily dusted the storehouse. Countless boxes of cork and corkscrews are shelved away in sorry neglect, and a curious headpiece lay on the ground. A hook a touch too large for hanging anything less than deadweight beings beckoned in the dark where a spill of liquid red could go unnoticed amid the even ocher dusting. It’s a studio of dismal design.

Out in the van space, a window above looks out in surveillance. It belongs to the main office, now more easily accessed than before the factory became abandoned. Up more stairs and swiped by a vinous tree branch before reaching for the doorknob.

Record books and work clothes littered the dusty (not red) room. A tatami room opened opposite. In the musty room, blown lights welcomed passing ghosts. Drawers were left open in recollection of twenty-year-old records. As if there was any hesitation to abandon the work files, the clock remains stuck at two minutes to five’o’clock. The factory spirits labored on, seeing red. 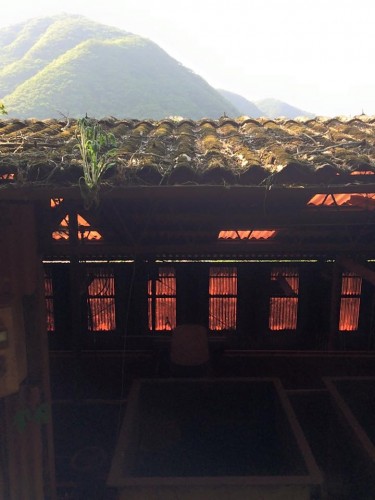 Opened to a hill in mid-drop, the darkest building invited bogeys in to live and dine. Stepping in blackened out the gilding skies of afternoon. Large machinery, the only installation that seemed capable of industrial creations within the abandoned factory grounds, were rowed away from the disturbance of a lightning strike or other such touches of god. Fine rising specks seemed to threaten a glittering fulmination, if pistons pumped on.