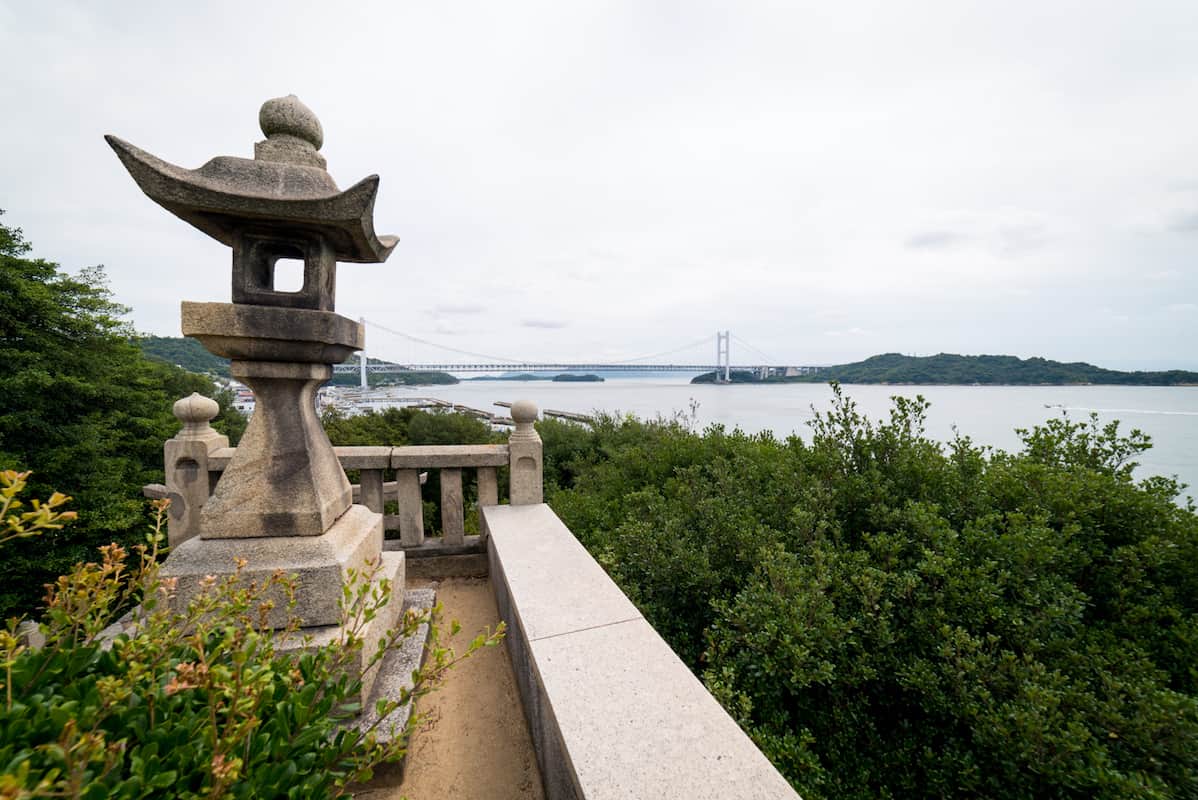 Tucked away in the southern parts of Japan’s Okayama prefecture – between Hiroshima and Kobe – is Kurashiki city, home to a wealth of both natural and man-made historical and cultural landmarks. Kurashiki city is known for its Bikan district, an old Meiji-era area with authentic reconstructed factory buildings, as well as its beautiful views. Kurashiki has some of the best views to be found in the western part of Japan, in particular thanks to the Seto Inland sea area and the Great Seto bridge that connects these islands. One of the best of these viewing spots can be found in a small, old fishing town called Shimotsui. Established in 1907, Shimotsui’s surrounding area has a history that predates its name, having been a port town whose existence has been recorded as early as the Heian period (794-1185). 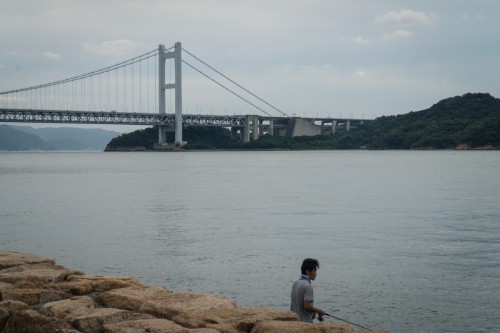 Shimotsui is home to Shimotsui Gion Shrine, from which one can catch a magnificent view of the Seto Island bridge as it links all the smaller islands together across a 13.1km stretch. Constructed between 1978 and 1988, the Great Seto bridge is the longest two-tiered bridge system in the world, allowing both cars and trains to pass over it. The lower track has even been adjusted to allow a Shinkansen (bullet train) line! 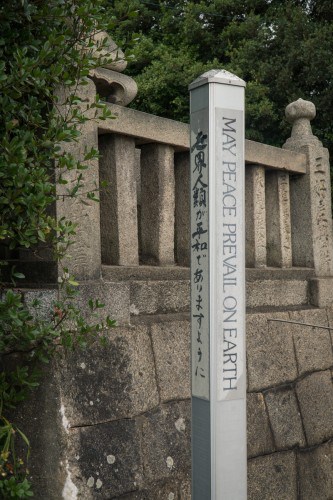 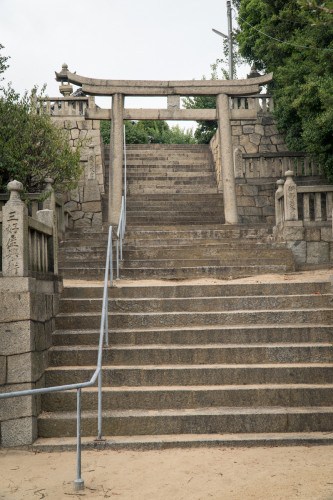 Shimotsui Gion Shrine is an incredibly popular sightseeing spot for travellers to this region of Japan. In fact, during the New Year’s period, where people in Japan pay visit to their local shrines (a custom referred to as Hatsumoude 初詣), this shrine is a sort-of pilgrimage for many people who come to catch the first sunrise of the new year, also known as Hatsunohide (初日の出). The view of the Seto Inland sea is indeed stunning, and while I did not have the opportunity to visit this place during the sunrise, during the late morning it was still extremely beautiful. 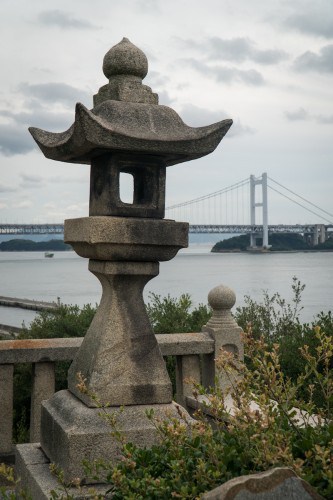 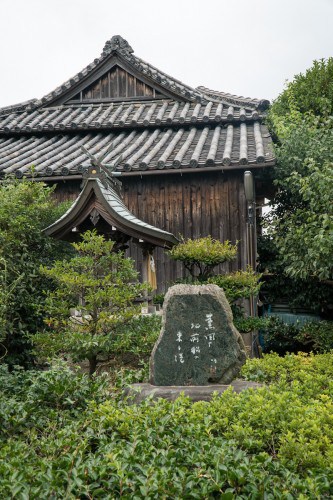 Getting to Shimotsui, Kurashiki City

The best way to get to Shimotsui Gion Shrine is by bus. For travellers coming from Okayama, take the JR Seto-ohashi line from Okayama station and jump off at Kojima station. Turn left after exiting the ticket gates at Kojima station, and head outside to the bus stop area. Turn left again and follow the row of bus stops until you get to bus stop #4, and take the Shimoden Bus labelled下津井循環線とこはい号 (Shimotsui Junkasen Tokohai Go), and depart the bus at Gion Jinja Shita (祇園神社下). Plan your day carefully as the buses only come once per hour! Here’s a helpful tip for those new to these bus systems: you enter in the back door, take a ticket, and the number that appears at the front of the bus will correspond to the number on your ticket, and will show the price you will pay to the driver upon departing at your stop. As of the writing of this article, the price of the bus trip to Shimotsui from Kojima station costs 310 yen.

The bus will put you next to a small carpark across the street from a small viewing spot where you will immediately see the big bridge. Head up the stairs, which will take you to the Shimotsui Gion Shrine. What was quite surprising to me, and quite refreshing in my opinion, was the lack of other travellers. As Japan becomes an increasingly popular destination for foreign tourists, the quiet serenity so often associated with shrines and temples in Japan has become rather difficult to discover. At around 11am on a Monday morning, I was literally the only other person there, which gave me ample opportunity to take some nice photos, as well as take a quick break to really take in the view. The shrine has some beautiful statues, architecture and greenery, which is certainly not unusual for a shrine in Japan! While I was leaving I did run into a few local elderly folks visiting the shrine, who were happy to share a greeting as I made my way down to the township. 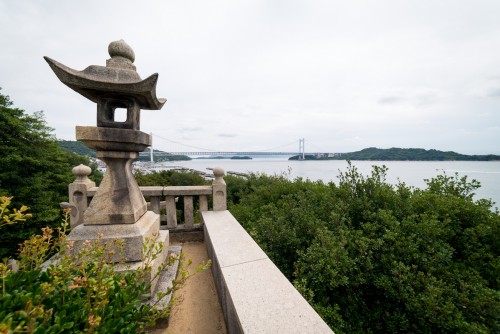 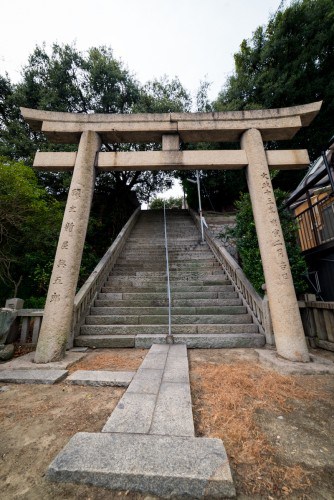 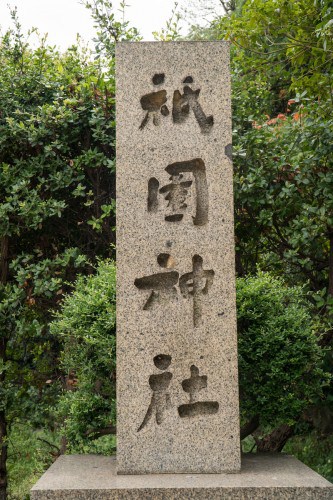 The Shimotsui township, established in 1907, has primarily acted as a fishing town and port throughout its history, supported by the Kitamae-bune (北前船), a trading route between Hokkaido and Osaka via the Seto Inland sea. In recent years its population has decreased, but its reputation as a strong fishing town has remained, and Shimotsui has strong name recognition throughout the Okayama region. Walking around the almost silent streets of the town, which has a population of just about 4900, one can see the history in the old style buildings and the authentic work culture of the town in the boats as they are docked at the port in the shadow of the Great Seto bridge. 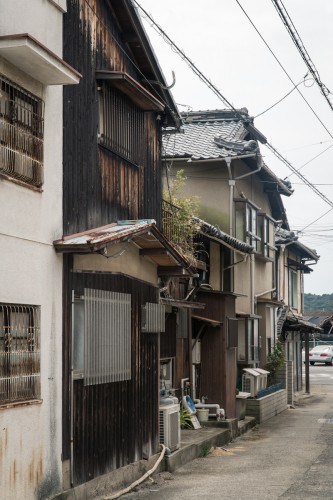 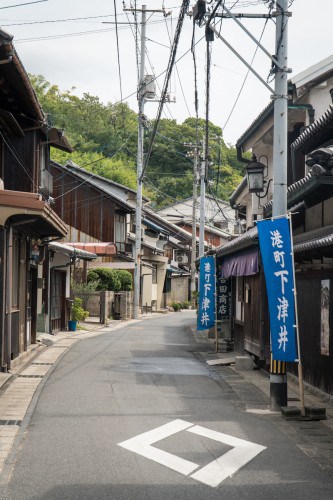 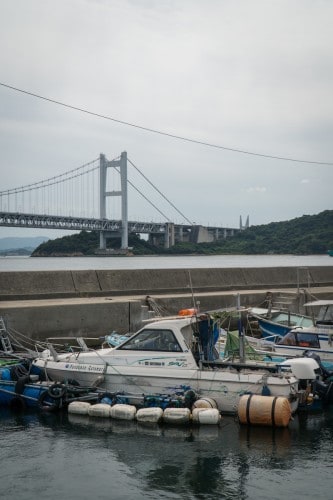 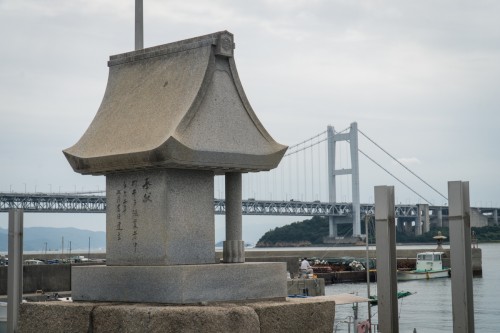 It is undoubtedly a contrast to the busy bustle of Tokyo and Osaka, to come to this immensely quiet and peaceful corner of Japan to explore the local history and culture. For those travellers who are looking for something a little different, yet familiar, with a view unmatched by almost anywhere else in the country, Shimotsui is definitely a trip worth making. Make sure you bring a camera, and if you can, try to get there before the sunrise!