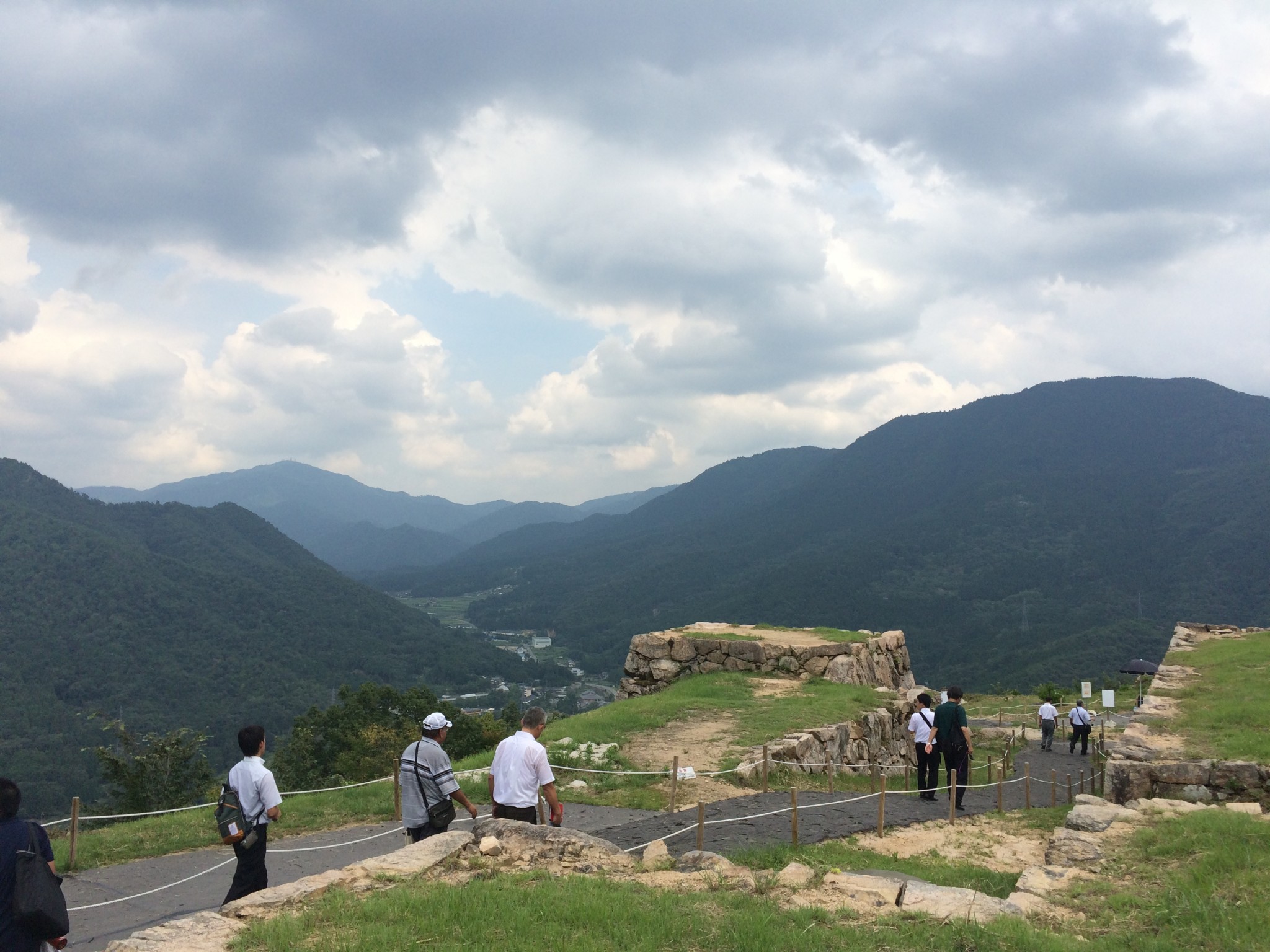 Hyogo prefecture’s route 312 bears north through a valley, scooped from a clay fistful of ancient ages. This road cleaves into the ground as a long-dead mammoth race on a migration path. It is old, it is green. Within this valley is Takeda castle.

The castle town’s Bantan JR station tracks south parallel to a road, and where the houses fall away, we had a crossroads where one option ran hillside into the wilds. A stairway marches into deep summer green and a powerful tori gate frames the natural world.  This sight marks the ascent to Takeda castle.

Takeda castle was still high to the heavens, yet forest divinity caught us on the breeze with our first passage into shrine grounds. We rounded left of the sphere of shrine, where the path builds a steep way towards the Takeda hilltop.  A small group of young friends bow-leggedly wobbled down. 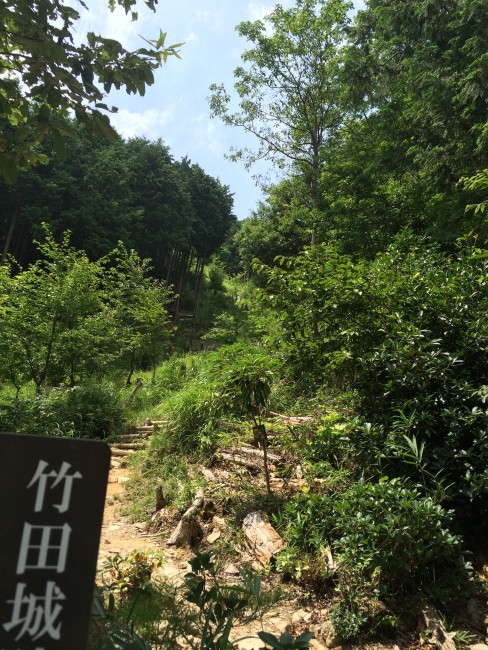 After hiking a short climb, we found an opening with saplings. Looking back towards the valley, one is spoiled by a premature verdurous splendor. The stairs staggered like my breath.  Keeping  even footing and turning around, the sapling space tapered into higher forest like a gorge.

Thirty or forty minutes on our way from the base, we stood at the ticket kiosk for the stroll of Takeda’s hilltop grounds.  Attendants were elderly, with a glow like the sun they were close to in their little room.  They spilled over with enthusiasm, asking my Australian friend and I about our home countries and to prick the corresponding locations on their physical map with a pin. We received our tickets for 500 yen and strode up the remainder of elevation change to Takeda castle. 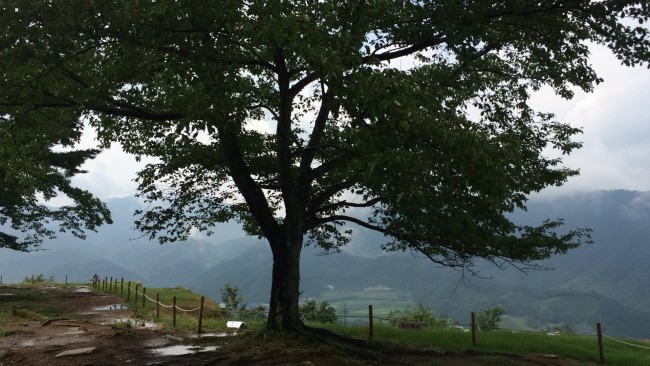 The first area had great, old trees I like to call “trees of life.” Trees of life:  burgeoning, hulking breadth of bough bushing over a firm trunk.  Shade was ample with these lords over the lower forest.  From this pleasance, valleys widened below and municipalities merged by a bridge here and a bridge there. 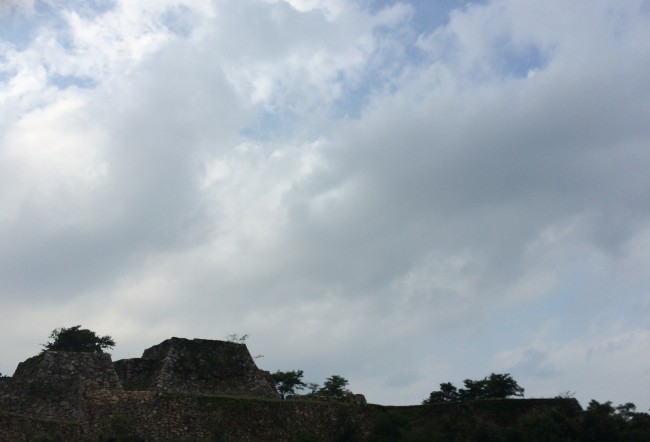 The small way to the next stage was broad, as castles go.  The grandeur of the castle itself was reduced to its walls. They seemed like the chiseled countenance of the mountain; like the natural granite rock faces in my home state of New Hampshire. The stone fanned from each crest of rock wall. These were features that once were levels of an impenetrable castle but now seemed like the sentient stone of the Earth itself.  The ramparts regressed to nature’s own. 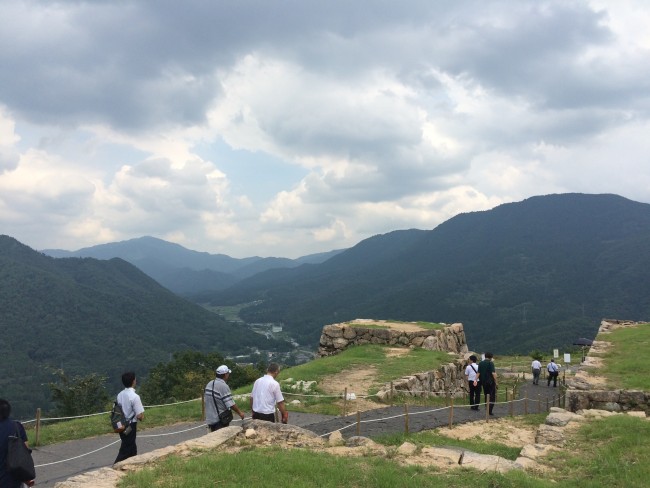 We soon caught up to a couple of women speaking a Slavic language.  We kept unintentionally walking alongside them, and presently we all passed a bifurcation of the pathway marked by another rampart.  Though we couldn’t even communicate with a similar language, we were caught together in the universal patterns of aesthetic that Japanese architects of old had schemed up upon this green hill. 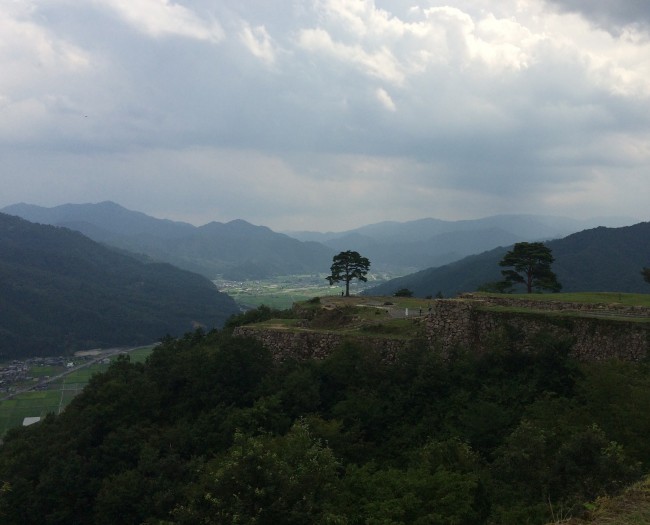 Congregating clouds added a drama to the next tree of life, a single seed of the southern reach of the Takeda castle remnants.  The abrupt end of the clearing and subsequent drop opened the view to the receded reach of the green valley where the old route stretched southwards.  Vivid green obfuscated the lower grey world; we were with the heavens. 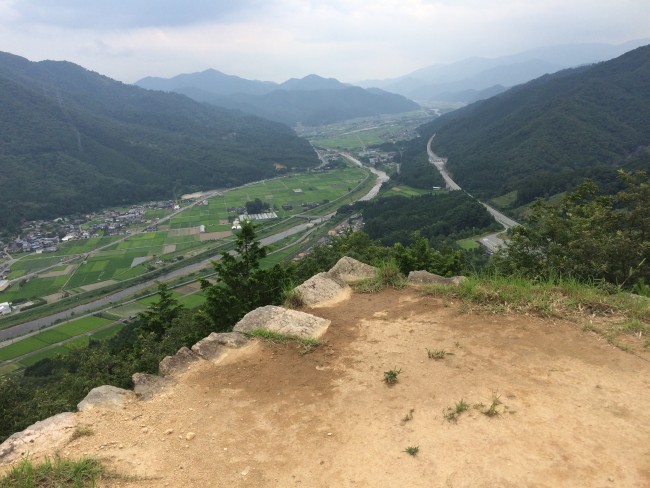 We rounded back along the posted path.  An elderly attendant prevented us from returning to the first of Takeda castle’s spaces.  We begrudgingly had to scale down the green away from the massive scale of Takeda’s open altitudes.  Clouds closed above and sheets of rain closed in.  My mind opened like the porous roadway near Takeda’s ticket kiosk as we made a circuit back to the ticket booth.

The attendants were having an exchange with a man who seemed oblivious to the downpour.  They remained warm, as did the weather, but we needed to save ourselves from a soggy sock-bogging.  A courtesy bench abutted the close-quarters kiosk, under the slight rooftop. After one attendant asked for a picture with us fun foreigners and we had a brief exchange, we knew waiting out the rain that we could re-enter the Takeda castle grounds. (The website mentions that one entry to the Takeda castle grounds costs 500 Yen – we were able to enter twice on the same ticket.) 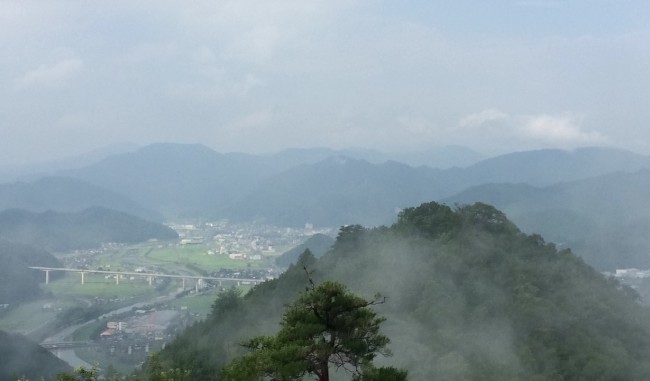 After the summer shower, our soles slammed to the wet stonework and up we went.  The panorama, moments earlier under a yellow sun, was a changed thing.  Dressing the valleys below, drifting down from the bust of mountains, were wisps of fine mist.  Chancing a Takeda visit during July’s “tsuyu” rainy season of Japan, here cradled in the middle of the Japanese islands, was a fruitful dalliance.  Peaked on the nexus of this natural array, we gazed onto a living and changing land mass. 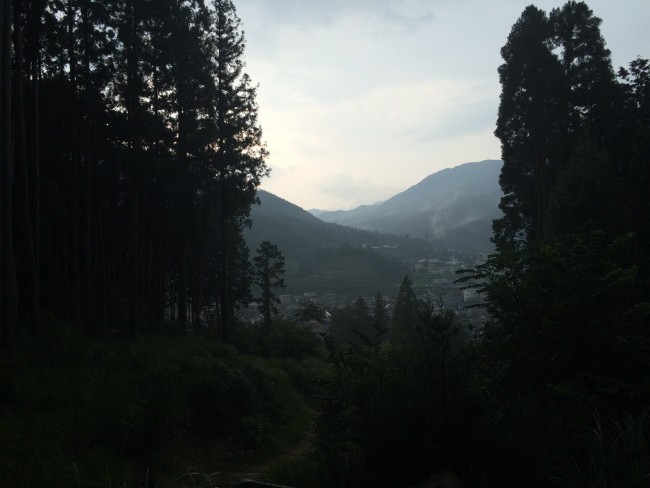 Rounding back to the ticket gate, we found our descent route.  It went through thicker forest than our way in.  The path was muddied up and we galloped down.  We stepped out into a clearing like deer, hooves planted in the wet grass.  We were soon back in Takeda town.