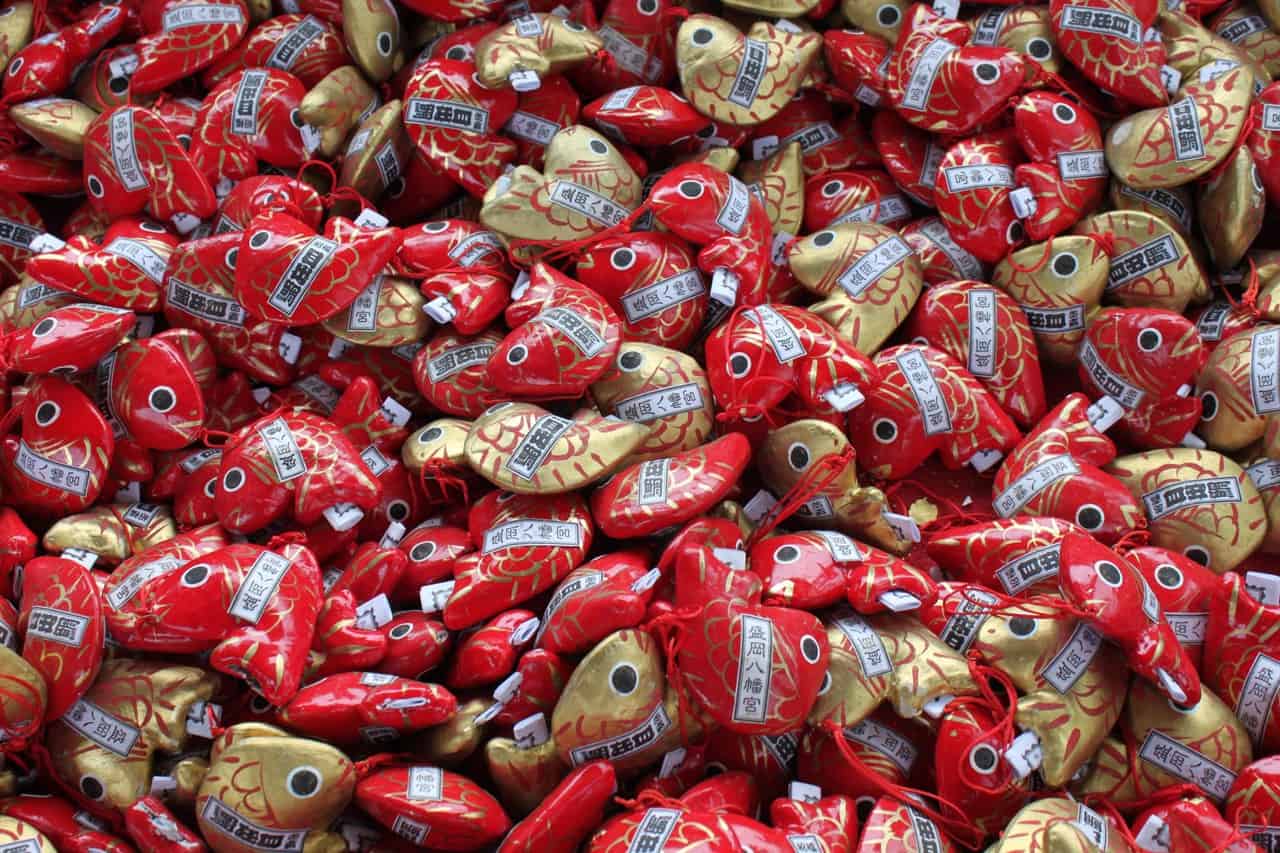 One of the first places I visited in Japan was Hachiman-gu shrine. I had just arrived and my new co-worker was showing me some of the more impressive places in Morioka. Because of this, Hachiman-gu holds a special place in my heart as being the first shrine I ever visited in Japan, and it was a great introduction to shrines in Japan. 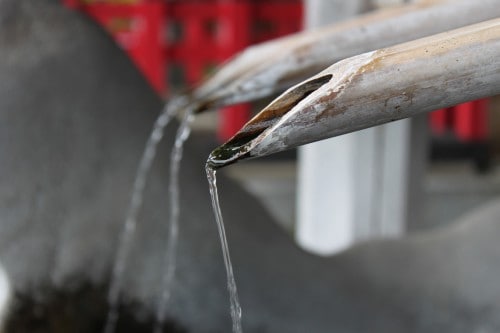 There are a few ways to approach Hachiman-gu, but I think the most impactful is from the front. The shrine sits at the end of a popular shopping district, and as you walk along the street, leaving the shops behind, the large tori gate at the entrance becomes bigger, until finally the street ends, and the tori gate towers above you. 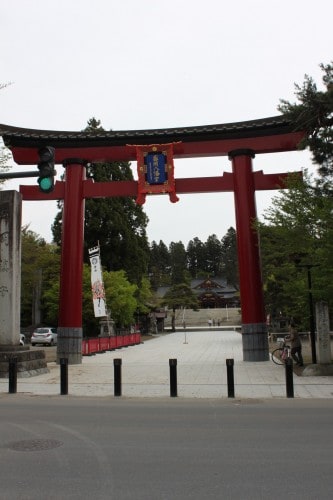 The shrine is dedicated to the kami Hachiman, the god of war, and it sits in an imposing position at the top of a staircase. The shrine is beautifully painted in reds and greens and oranges, and looks fairly new due to it’s reconstruction in 2006 after the Edo Period building burned down in 1884.

To the left of the stairs are twelve small shrines for each of the twelve Chinese zodiac signs, and perched on either side of the staircase are two komainu (or lion dogs), protecting the shrine.

To the right of the main building you can find the “omikuji,” hundreds of charms and fortunes and placards available for purchase, ranging in price from 200 yen to 1000 yen.

I have only ever received good luck from my Hachiman-gu omikuji, and whether or not you believe in fortunes, they are still a fun souvenir to take home. 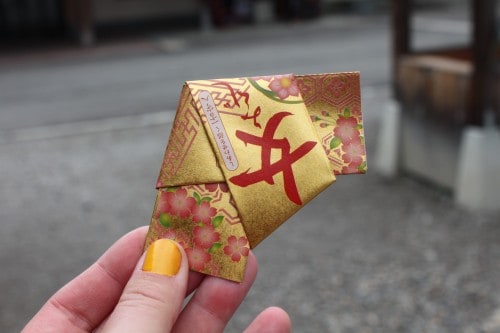 Nearby you can find a pool of water with 1 yen coins floating on the water or resting on the bottom. If you can place your 1 yen coin on the surface without it sinking, you will receive good luck. 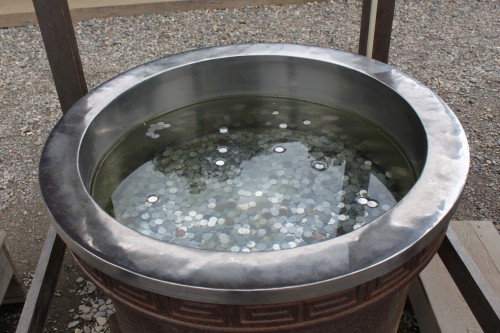 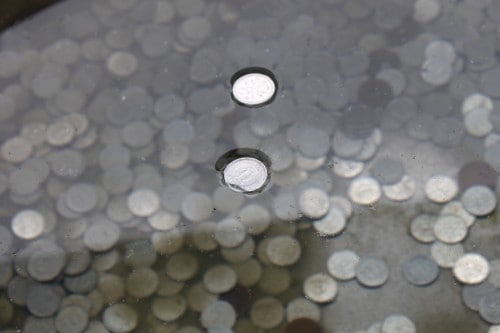 And next to this is a trough filled with painted fish. Pay 200 yen and you can take one of the available fishing poles and fish out your fortune, don’t worry you can keep the fish as well. 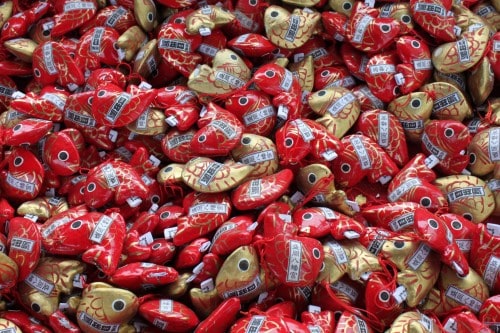 If you exit the shrine from the main gate and take a left, following the street you will come to a small park which houses the 16 Buddhist Disciples. It’s worth making a short side trip to visit them, and it’s a great place to relax if the weather is nice. 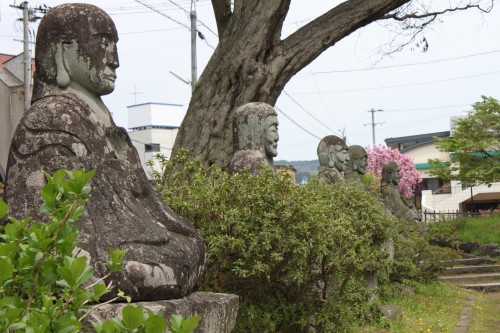 Hachiman-gu is usually pretty quiet, but if you come during one of the festivals, you are in for a treat. On the second Saturday in June, Morioka holds a special parade called “Chagu Chagu Umakko.” A line of horses dressed in special decorative garb, and dozens of bells, parade from Sazen Shrine in Takizawa, a neighboring town, to Hachiman-gu in Morioka. “Chagu Chagu” is onamonapia for the sound the horses make as they walk through the streets, and “umakko” is horse in Japanese. The parade starts in Takizawa at 9:30 and arrives at Hachiman-gu around 2:00. Definitely an event worth seeing.

Another big event at Hachiman-gu and an accompanying parade starts on September 14th and goes through the 16th. Dozens of floats, decorated in various themes parade through the streets of Morioka. On the 14th, the floats parade through various parts of the city starting at 1:00. On the 15th there is a night parade which begins at 6:00. And on the final day, the 16th, there is a special event called Yabusame (horseback archery) hosted at the shrine. During this time especially, the streets leading up to the shrine become crowded with food vendors and game booths. 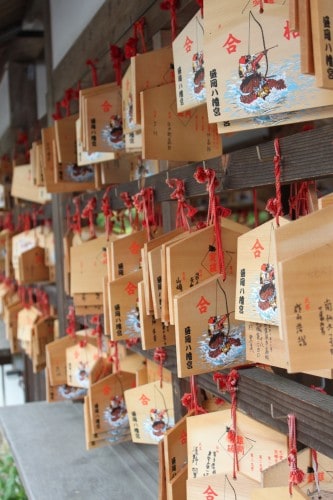 You can also come during New Years, after midnight the shrine fills with crowds of people attending their first shrine visit of the year. The atmosphere is unusually festive and the shrine goers are happy and smiling, reveling in the start of a new year.