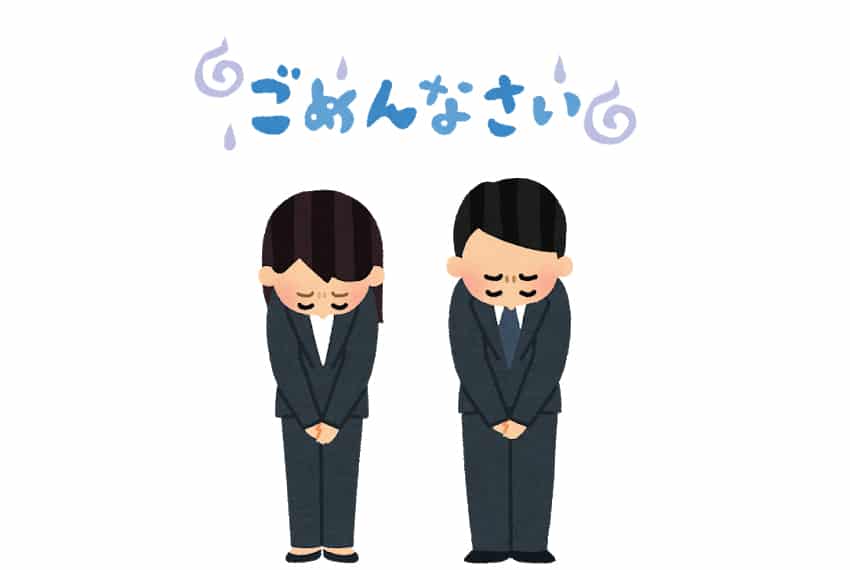 Gomenasai and the Many Ways to Apologize in Japanese

Gomenasai (ごめんなさい) is perhaps one of the first words that you will learn when you become interested in the Japanese language. But, gomenasai has many variants that offer us many possibilities to say, “I’m sorry.” Below, we will learn some of the other variations of an apology, their meaning, and when to use them.

The word gomenasai is considered the dictionary form that means “I’m sorry,” and can be used as a formal apology. However, the shortened word, gomen (ごめん), is also heard frequently in daily life. Children and young people use this abbreviation as a colloquial way to ask for forgiveness. People also use it when they are in a hurry or as a gentle form of expression among friends or relatives.

In almost every language, the younger generation change words in many ways. For example, the phrase gomenasai became modified into gomen, and from there, became gomen-ne (ごめんね).

This phrase is most commonly used by women and frequently heard from teenage pop idols. This form of an apology can be interpreted as sweet and cute, which can appeal to an audience if trying to gain sympathy.

One of the curiosities of the Japanese language is how they deal with gender – small changes can be made without changing the root of the original word. Again, we jump from gomen-ne to gomen-na (ごめんな). Men most commonly use this phrase and is considered a ‘masculine’ form of an apology. Said in this way, one can casually deliver an abbreviated apology while sounding attractive to the ear.

Other Ways to Use Gomenasai

Gomenasai is not the only way to say “sorry.” For instance, when we use sumimasen in Japanese, it’s another way to apologize or ask for one’s attention. However, gomenasai is one of the fundamental words Japanese children learn from an early age. Japanese culture focuses on showing deep respect and consideration for other people’s own space. That is why gomenasai is taught at an early age and used in any critical situation where it’s appropriate to offer an apology.

Two useful ways to use gomenasai are the following ones:

Gomen kudasai (ごめんください) is a mix of “I’m sorry” with “Please.” Together, they form the phrase, “Please, sorry for the inconvenience.”

This phrase is useful when:

The expression, Hontouni gomenasai (本当にごめんなさい) means: hontouni = “truly”, gomenasai = “apology.” Together, it conveys a deeply remorseful apology. You may hear it on the news when someone takes responsibility for a mistake that affected many people. For instance, if a company finds an error in its production line, the company representative will bow deeply in front of the press and say hontouni gomenasai. In this way, the responsible person acknowledges the mistake and shows the desire to correct it.

In addition to apologizing, we can use gomenasai within a conversation as a way to show empathy. It would imply a subtle “I understand your situation” or “My thoughts are with you”. It is also a neutral expression that helps to relax a heavy atmosphere without showing direct or personal opinions. For example, it would be appropriate to use gomenasai when we are told of someone’s death, about an accident or illness.

I hope these sentences are useful to you on your visit to Japan. They might help you improve your knowledge of the culture or satisfy your curiosity about the Japanese language. Until next time!