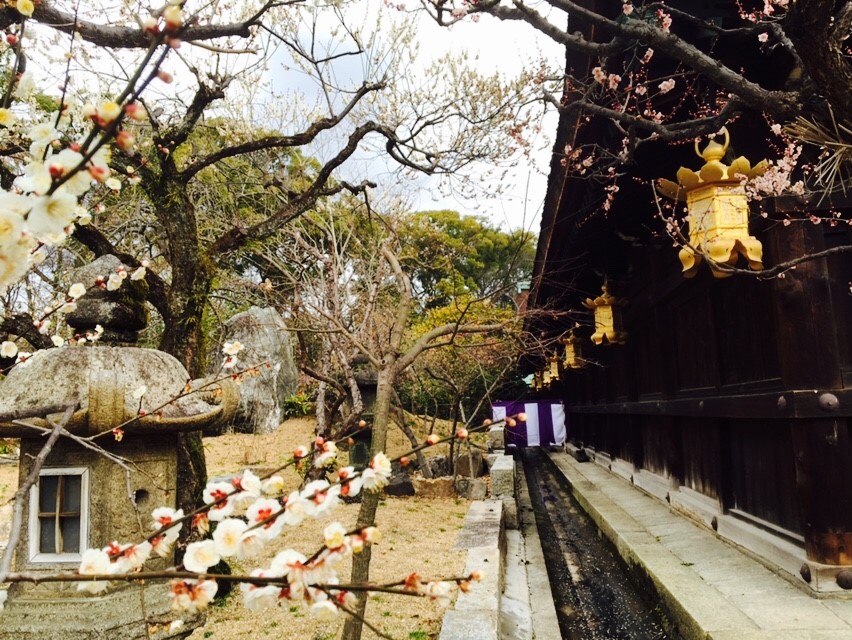 Kitano Tenmangu, the spirit of the scholar

In the northern corner of Kyoto, a little ways from The Temple of the Golden Pavilion (Kingaku-ji) lies the Kitano-Tenmangu Shrine. Kitano-Tenmangu Shrine was first constructed in 947 to appease the raging spirit of the scholar and politician Sugawara Michizane. After being exiled due to political reasons, many calamities fell upon Japan after his death. The emperor decreed that Sugawara Michizane be venerated as a Kami (Shinto god) of natural disasters, called “Tenjin” and consequently Kitano-Tenmangu Shrine was built in his worship. Furthermore, due to his scholarly life, he also became a Kami for education. In modern times he is more venerated for this, and during exam periods many students flock to his shrines. 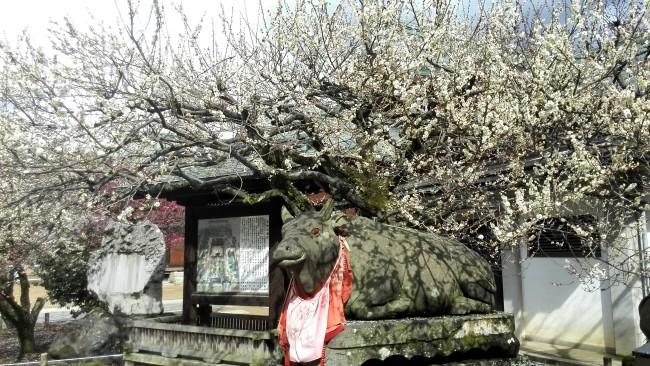 The entrance to Kitano-Tenmangu is an attractive lantern lined path with some yatai (street food) and many cow statues affectionately nicknamed “ushi-san”. If you rub ushi-san’s head or horns it will help with your intelligence while touching the body will help cure any ailment on your own body. 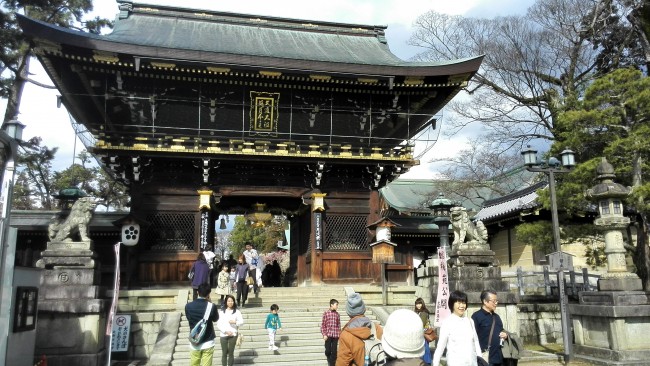 Kitano Tenmangu – When should we visit? 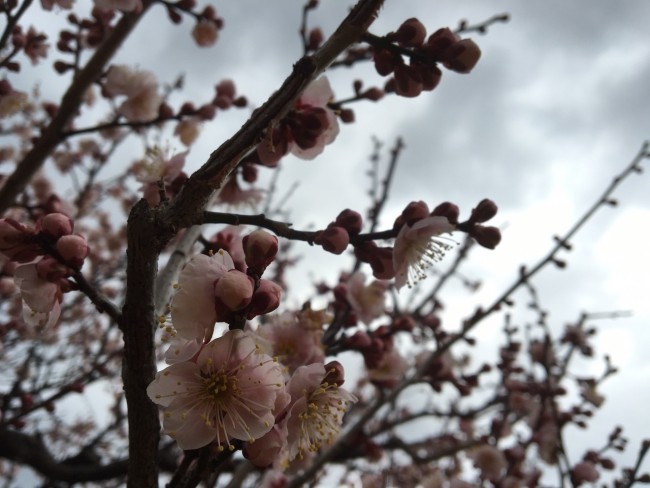 Ume plum blossoms! In all of Japan it is said that Kitano-Tenmangu Shine is a top place for Ume blossom viewing. This is because Sugawara Michizane was very fond of the flower and so it became a central theme in the construction of Kitano-Tenmangu. If you have never seen Ume before, please make sure to do it here. The overwhelming concentration of them in Kitano-Tenmangu makes for an amazing sensation of sight and smell mixed in with the Shinto Shrine setting its really a special place.

To the right of Ro-mon gate there is the Chozu (hand washing) ponds found at religious locations in Japan. Do you know how to use it? When visiting shrines it is considered as a proper way to respect the Kami and its followers. To do Chozu correctly, hold the ladle with your right hand and wash your left hand. Then, switch hands and wash the right hand. Switch hands again and pour some water into your left hand and use it to rinse your mouth (don’t drink it). Once more wash your left hand, and then finally rinse the ladle by holding it vertically. 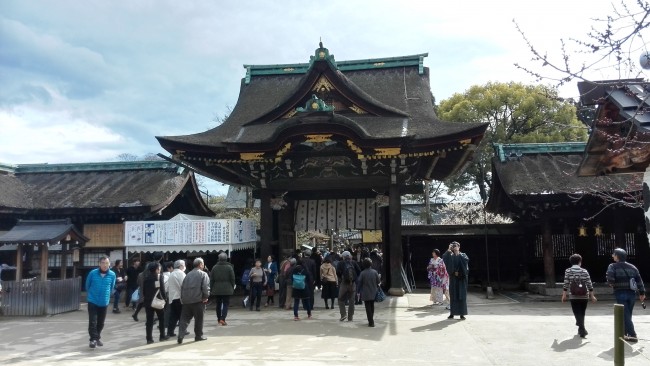 After enjoying the many ume blossoms in this outer area, lets head to the next gate “Sanko-mon”. Inside Sanko-mon the main Shrine of Kitano-Tenmangu is found. Here you may make offering and request to Tenjin for educational success. You can do this by first donating a coin by throwing it into the big wooden tray and ring the big bell, bow twice and clap twice keeping your hands together. Before asking Tenjin for anything, give thanks and introduce yourself. After you have made your request, bow once more. Tenjin will hopefully help you get top marks on the test now, but be sure to still study nonetheless. 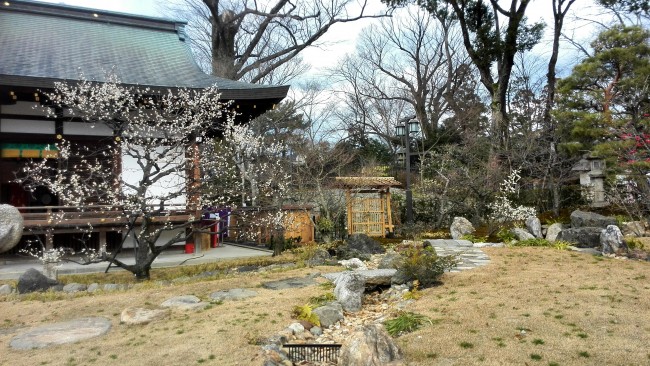 Outside Kitano-Tenmangu Shrine there are many more plum blossoms and nice sights to see, such as torii gates similar to the ones at Fushimi Inari Taisha. 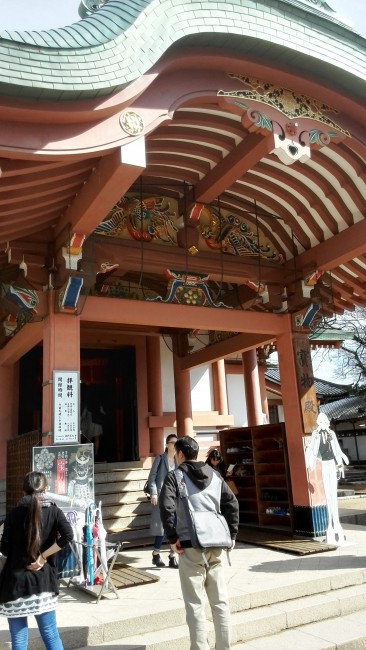 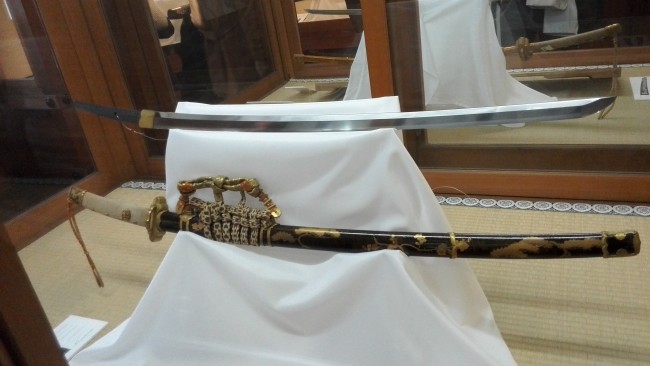 On the east side (right) of Kitano-Tenmangu Shrine is Houmotsuden (treasure house). Inside, to noones great surprise, are many treasures including paintings, many katana (swords), armor and a really interesting map. 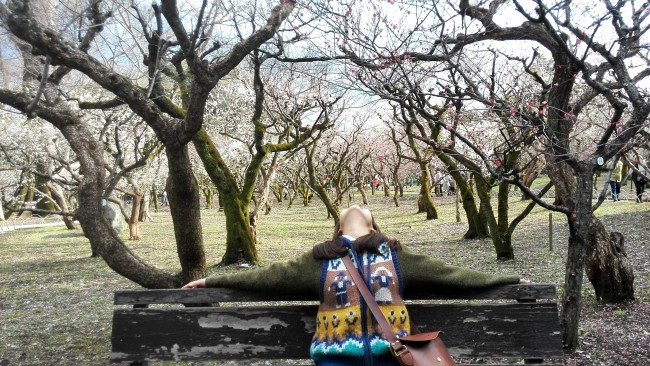 On the west side (left) of the Shrine is the Plum Grove garden. With over 2000 ume trees and the main attraction to Kitano-Tenmangu Shrine when in season (mid February to April), you have probably already spied it by this point. The entrance is back outside the Ro-mon gate and costs 700 yen, although this might some pricey to some it includes an interestingly flavored tea and a senbei (rice cracker) that you can enjoy inside. These photos were taken quite early in the season (2016 February 14th) as 2016 had a remarkably hot winter, the Ume seemed to bloom a bit early. About half or more were in bloom so I would most likely return in a week or two, I hope to see you there too! 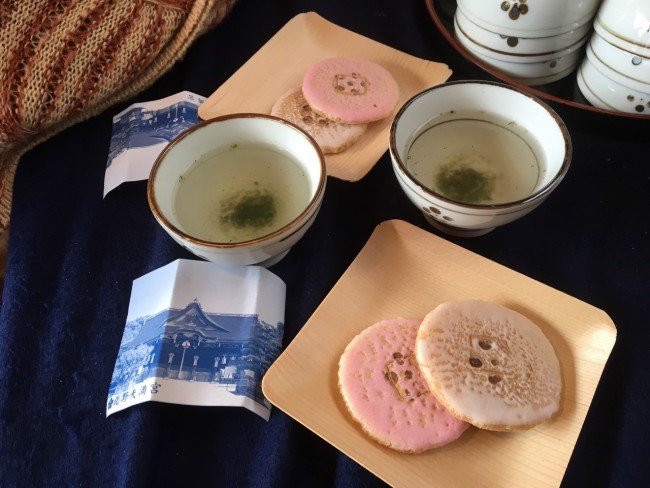 Included in the ticket price is a tea and rice cracker, which you can enjoy whilst sitting off to the side of the garden. The tea is really salty (like really really salty) but delicious and sembei is always good. They are also selling more food here, so you could have lunch with your tea too. 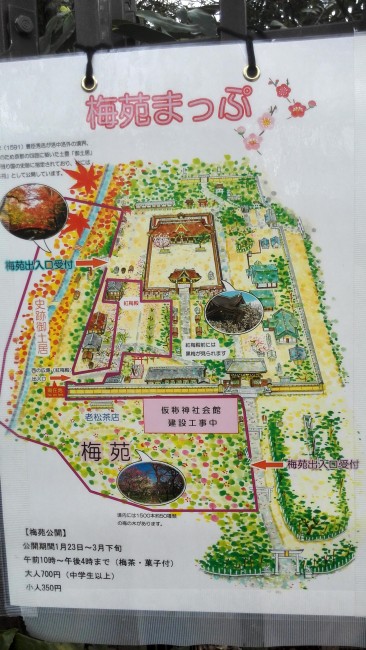 The entire garden area is pretty large and along the river are many Momiji trees, which are the famous red leafed trees in Autumn. So if you can’t make it to Kyoto in February or March, Kitano-Tenmangu still has something to offer you in Autumn when during the night the Momiji trees are illuminated and becomes a top spot for Momiji viewing. 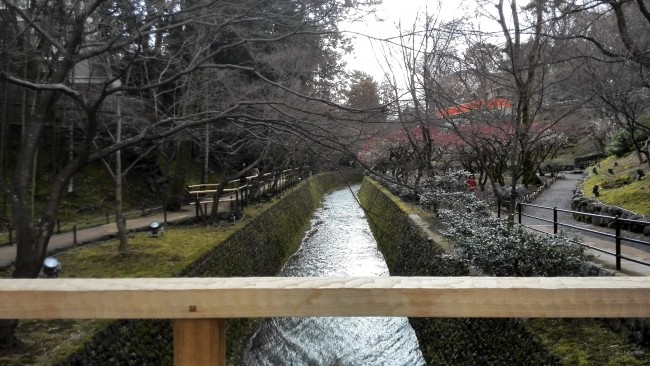 Finally, Kitano-Tenmangu Shrine plays host to a wonderful market on the 25th of every month. The market sprawls the entire Shrine grounds and the surrounding street as well. You can buy vintage kimono very cheaply, plants, antiques, toys and of course you will also find many food stalls. To top things off, entry to the treasure house is free on this day!

I hope you will enjoy the Ume blossoms at Kitano-Tenmangu Shrine and while following the proper etiquette make your requests known to Tenjin, so no more excuses not to study for the top mark! 頑張ろう！