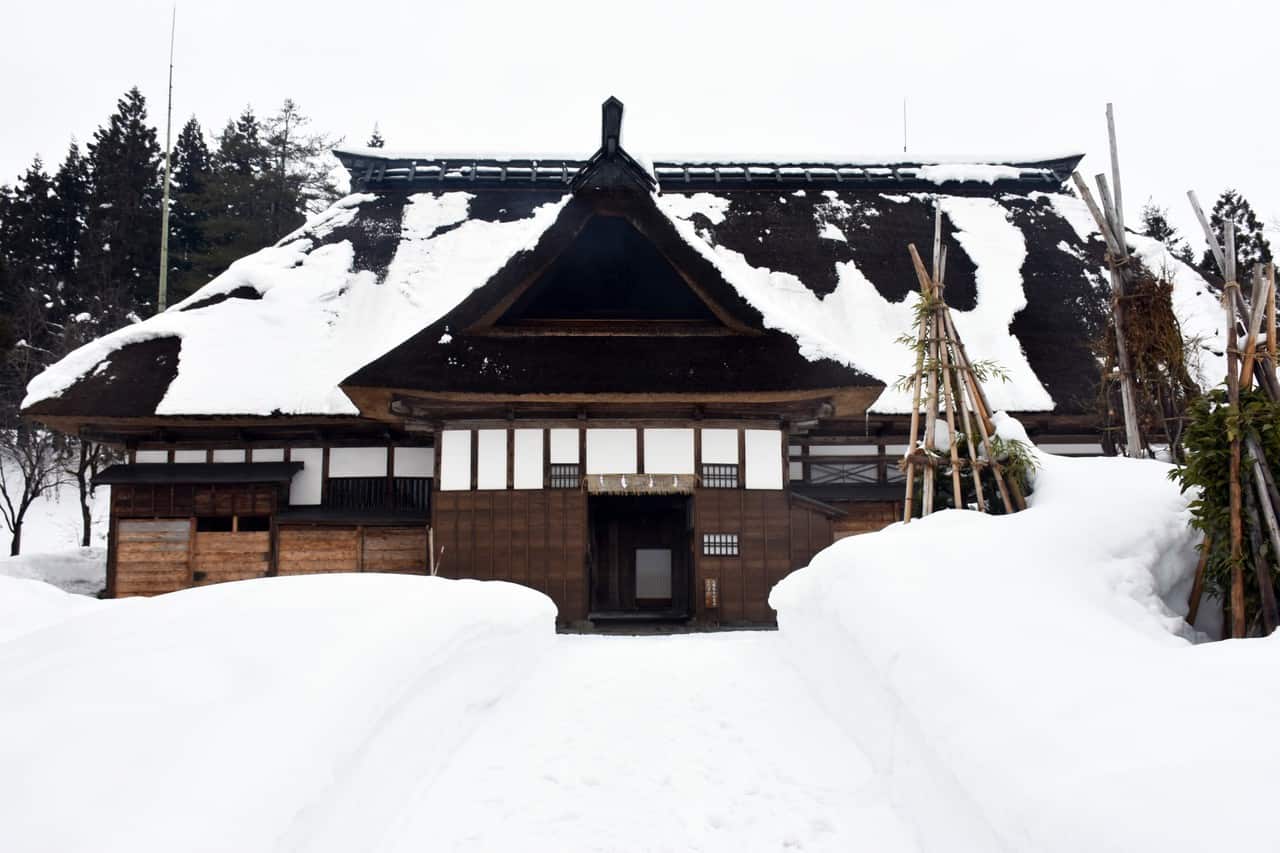 Discover the Meguro Residence, a Farmer’s House in Snowy Uonuma

The Meguro Residence is located in Uonuma, a charming small town in Niigata prefecture. It is surrounded by beautiful mountains and in winter the city encounters heavy snowfall. Uonuma is famous for the artwork by Uncho Ishikawa, the ‘Michelangelo of Echigo’ but also has an excellent ski-resort called Suhara. 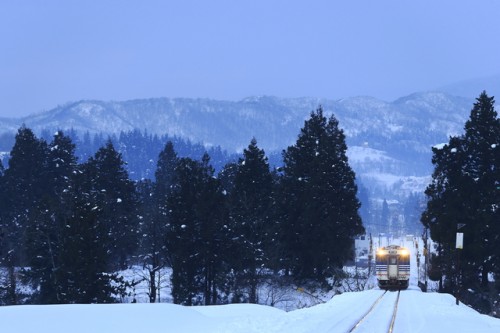 In Uonuma you can find an old traditional farmer’s house called Meguro-tei. This belonged to the Meguro clan in the past, and portrays the lifestyle of the wealthy farmers who used to reside there. When visiting the Meguro Residence, you will see many interesting, traditional architectural features such as the window that actually functions as the chimney. 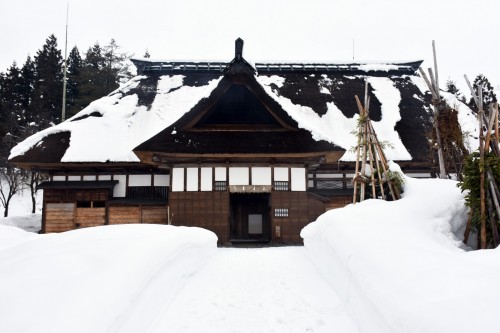 The Meguro Residence seen in winter 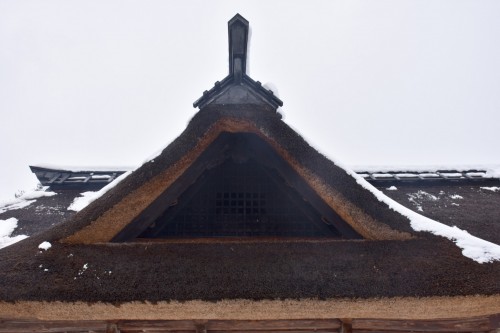 The front roof window functions as a chimney

It is believed that the Meguro clan came from a long history of samurai warriors. They were rich farmers who served under the war lord of the Aizu-ashina clan. In 1590, the Meguro Clan returned to their residence, Meguro-tei after losing a battle.

The Meguro clan was very influential with an interest in promoting modernization. This included industry, education, culture and improvement of roads and railways.

In 1610, the first clan leader served as a leader of the area’s 15 villages. The second clan leader appealed to the Echigo province in the 1690’s. At that time, a silver mine had been discovered and disputes were taking place.

From 1755, the eighth clan leader served as a ‘Warimotoshoya’, a kind of leader of headman under the government. The Meguro clan continued to serve as ‘Warimotoshoya’ for many generations.

Meguro-tei is the former residence of the Meguro clan, and it is now a protected Cultural Heritage site in Niigata. It is a very impressive farmer’s house constructed with heavy wooden beams and a roof made of straw. The heavy beams and the deeply slanted roof were necessary features in an area where heavy snowfall often occurred.

The most impressive feat of the Meguro-tei is how the front roof window was used as a chimney, which is a typical characteristic of the ‘Chidorihafu’ style.

When you walk in through the front door of the Meguro Residence you see beautiful wooden flooring and a high ceiling. In the centre of the house you see an irori, which is a traditional Japanese hearth. It was used to heat up the house as well as for cooking. 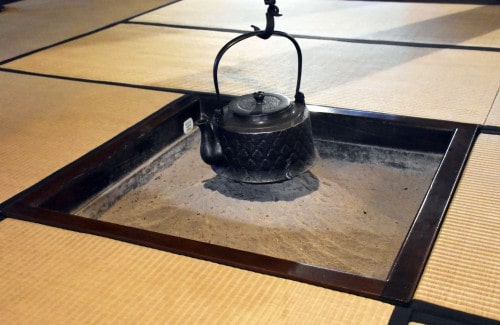 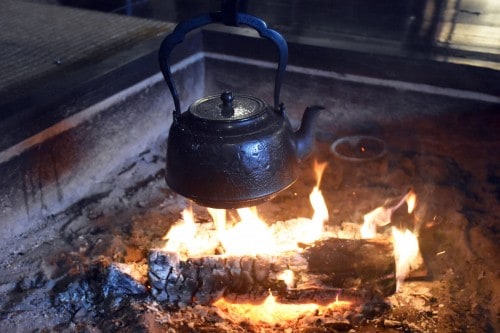 The irori was used for cooking and heating up the house

The irori at the Meguro Residence is particularly interesting due to its large size. The smoke travels up towards the ceiling and escapes through the front roof window. In the past, when the house was fully operational, you would be able to see and smell the smoke inside.

A section of the house was used for the horses in winter. They would be brought in and kept safe and warm within the main house. A loft was constructed where straw would be kept safe and dry for the animals. 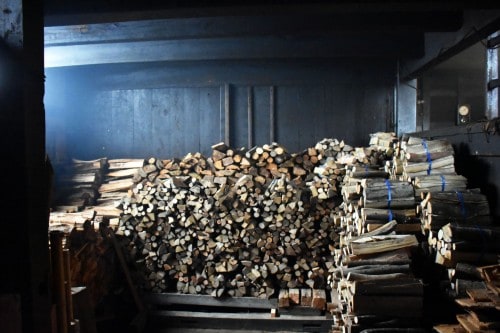 The Meguro Residence has several other traditional features, such as the tatami floors and clay pots that were used for cooking.

Next to the Meguro Residence you can also find the Meguro-Hontei, a small folk culture museum. This is actually one of the most interesting museums I have ever visited because I am incredibly interested in the Japanese traditional lifestyle and culture.

This museum displays a range of household items such as pots, cooking utensils and farming tools. The most fascinating part of the museum was the clothes and accessories that were constructed from the rice straw. Among these objects were sandals, winter boots and snowshoes as well as coats, baskets and hats. The making of these objects is called Waza-Zaiku and, sadly, it is slowly being forgotten today. 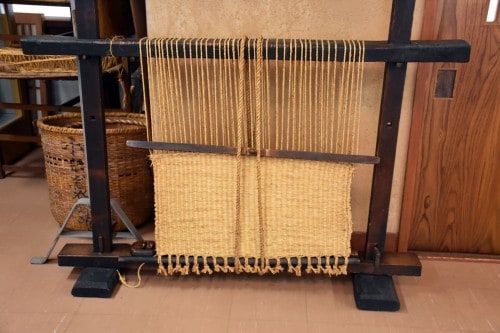 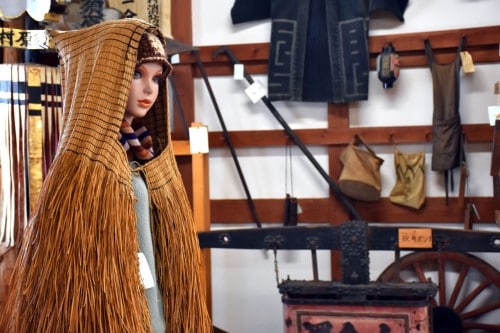 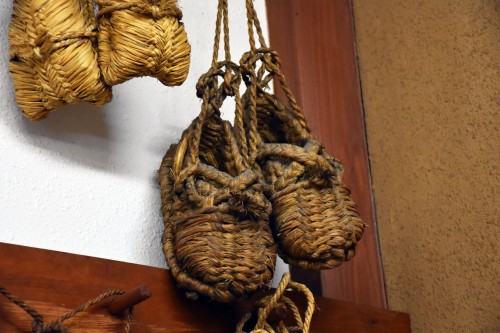 All kinds of shoes were made from rice straw, including winter boots 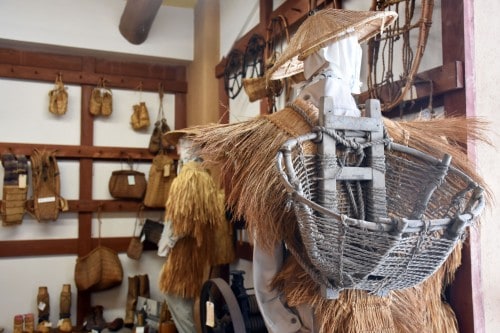 Uonuma and Meguro-tei’s surroundings are beautiful in winter. As you take the local train, you have a chance to properly see the snowy, winter landscape surrounding you.

Due to the fact that Uonuma receives a lot of snow during the winter, the trains are incredibly strong. I grew up in Sweden, but when we had a snowstorm the trains would all stop running for a full day. In Uonuma, even with snowfall over 50 cm high, the trains were still running perfectly on time. 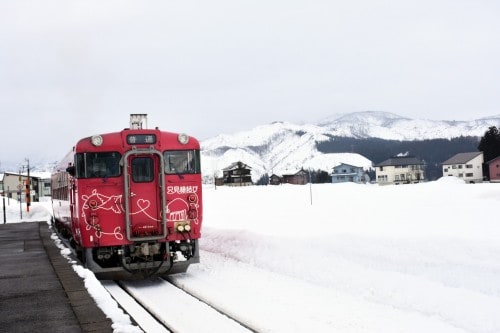 The trains in Uonuma are very strong and punctual

If you are visiting Meguro-tei, do not forget to pay a quick visit to the Sake Brewery. The brewery is just a 10-minute walk from The Meguro Residence. There you can sample and buy many kinds of Japanese sake in the small shop, and it is the perfect souvenir to bring home from Uonuma.

How to get there:

Take the Joetsu Shinkansen from Tokyo Station to Urasa. Change to the JR line and get off at Koide Station. The journey takes approximately 2,5 hours.