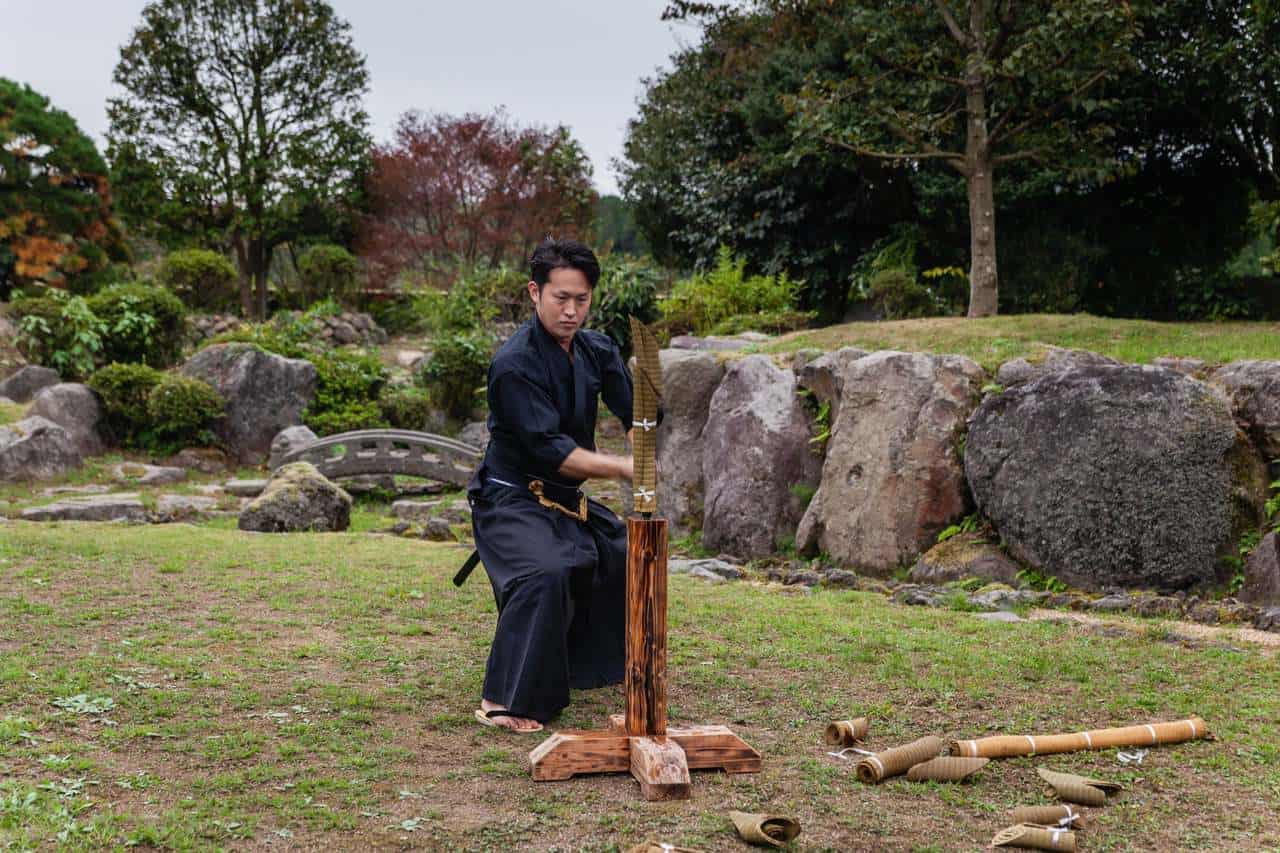 Being a Samurai for a Day in Meihodo, Kumamoto

By Toshiko SakuraiDecember 10, 2021No Comments

What if I told you that here’s also a hidden place where the ultimate bushido (The Way of the Warrior) experience is possible? Kumamoto prefecture, the last resting place for legendary samurai Musashi Miyamoto, is also one of the regions where the long-lasting legacy of his philosophical thought and martial arts school is kept alive. Here, there’s a place surrounded by nature at the base of Mount Aso, so secluded and off the beaten tracks that even my local taxi had no clue what it was nor its whereabouts when I told him to take me to Meihodo. So there I was, helping my own driver with my phone’s map application and secretly hoping I wasn’t giving the wrong directions. Fortunately, we eventually made it.

And saying the small effort was worth it may be the understatement of the century.

Meihodo (鳴鳳堂) is a vast facility of 56,000 m2 and a couple dozen buildings built to resemble what a traditional Edo period samurai residence used to look like. But there’s an air of authenticity that cannot be found on existing historical samurai residences nowadays, many of which function mainly as museums, beautiful stagnant pavilions, not to interact with. Meihodo is made to be lived in. During my two-day stay, I participated in various experiences offered at Meihodo. Here, Bushido is not a relic of times past but a very much alive way of life.

Shortly after arriving and exchanging introductions, I was taken to the dojo for the initial explanations. But what I initially thought to be only a series of demonstrations, quickly turned into a real immersion experience. I was instructed to get changed into a white hakama (袴). Changing my clothes, I was not just a regular visitor anymore. From that moment on, I became a samurai apprentice for a day.

Stepping into the Geta of a Martial Arts Practitioner

After the introduction, my hosts Tanaka-san and Masumoto-san provided a demonstration of their craft. I sat in awe, looking at such skillful moves product of a life devoted to martial arts. The setting couldn’t be better, as we were flanked by imposing and genuine samurai armors from the Edo period. And yet, the wooden colors and the white floor somehow created a peaceful and calming atmosphere.

The end of the demonstrations signaled my turn to get to work. Tanaka-san instructed me about proper courtesy protocols, warm-up exercises, and correct posture and breathing techniques. I did my best to follow his directions and admittedly felt somewhat proud to have my posture complimented. Once I was ready, he drew a pair of bokken (木剣, wooden katana) for practice, and so it started my training to hold and swing my sword firmly. Repeatedly. I was told to visualize an internal straight line while focusing my strength on my core body and keeping the proper stance. The objective is to achieve a swift movement while swinging the sword forward. Over and over. Until I eventually managed to make that satisfying swoosh sound.

So it was time to kick it up a notch.

We walked to an open field outside the dojo where a rolled-up straw mat was placed atop a wooden base as a target for test cutting. There, I was able to witness the katana mastery of my hosts. I was almost left unable to get the right shot, as my camera speed could barely keep up with the gracile yet quick cutting movements. And now it’s your turn to try it, I heard next. Cue nervous excitement…

Up to this moment, I had only clumsily held decorative katana swords. I never thought I’d get the opportunity to hold the real deal and practice how to cut with it! I braced myself as I held the sword, though I knew such short training couldn’t possibly be enough for me to come close to what I had just witnessed from my hosts. So I stood there, repeating the moves I had just learned, trying my best to measure the distance, and silently praying that I wouldn’t slip or get stuck. Breathe, I’m telling myself. Step into position. One… hold my arms up in the air as I was told… swing the blade quickly and decisively as I practiced… aaand two!

A split second and a sliced portion of the straw mat hits the floor.

This impressive Meihodo compound was built in 1997, designed initially as private martial arts training facility. Eventually, its range of activities broadened to include the promotion of traditional Japanese culture and arts. While the main focus of the touristic experience in Meihodo is still related to samurai culture and martial arts like judo, karate, or kendo; activities such as Ikebana (flower arrangement), tea ceremony, calligraphy, or traditional instruments also take center stage for serious students or regular visitors alike.

As far as traditional instruments are concerned, Meihodo also features a one-of-a-kind taiko drum. Specifically, the world’s largest one. A feat of craftsmanship, it was built in 1998 to celebrate 400 years of skill and tradition of Asano Taiko, a drum manufacturing company from Ishikawa Prefecture. This remarkable piece required the trunk of a large Bubinga tree, as these drums are made from carving out the wood from a trunk. For standard taiko sizes, drum artisans usually employ Japanese Zelkova trees. Hearing the powerful sound of this drum at a close range may not be for the faint of heart, as I was genuinely taken aback by the sound wave’s reverberating effect on my head.

Both the drum and the overall facilities have also been used as filming locations for music videos or various cultural content. No wonder why. I was also told that groups of martial arts students sometimes spend short training periods living here. Fighting the temptation to switch careers, I walked around the premises imagining what living in a samurai villa must have been like.

The last part of my training took place shortly after sunrise. The fresh scents of a chilly autumn morning filled the air as we headed to one of the pavilions, where I would learn about Zen meditation. After a brief introduction, I was invited to choose my seating freely, so I chose a side of the pavilion facing trees that I love watching for its lush greenery. It ended up being much tougher than I had anticipated. Keeping a lotus posture with crossed legs while doing long abdominal breathing was the easy part. Maintaining the eyes only semi-closed and avoiding closing them or squint for what felt like a very long period, all the while trying to (unsuccessfully) keep out wandering thoughts, proved almost impossible. Still, committing one’s first waking hour to relaxation and breathing exercises felt great. Perhaps I should continue practicing after this learning experience.

It may take about 2 hours from Kumamoto station. The closest train station is Ichinokawa on the JR Kyushu Hohi line. Afterward, it’s a 30-40-minute walk or 10-minutes by car (private vehicle or taxi) to Meihodo, as no other means of public transportation are available at this exact location.

Meihodo provides an immersive experience unlike any other. Not only for taking place in a traditional style Edo era samurai residence in a remote location, but also the fact that guests become active participants in a hands-on learning environment that brings everyone closer to traditional Japanese culture. In doing so, contributing to keeping it alive.