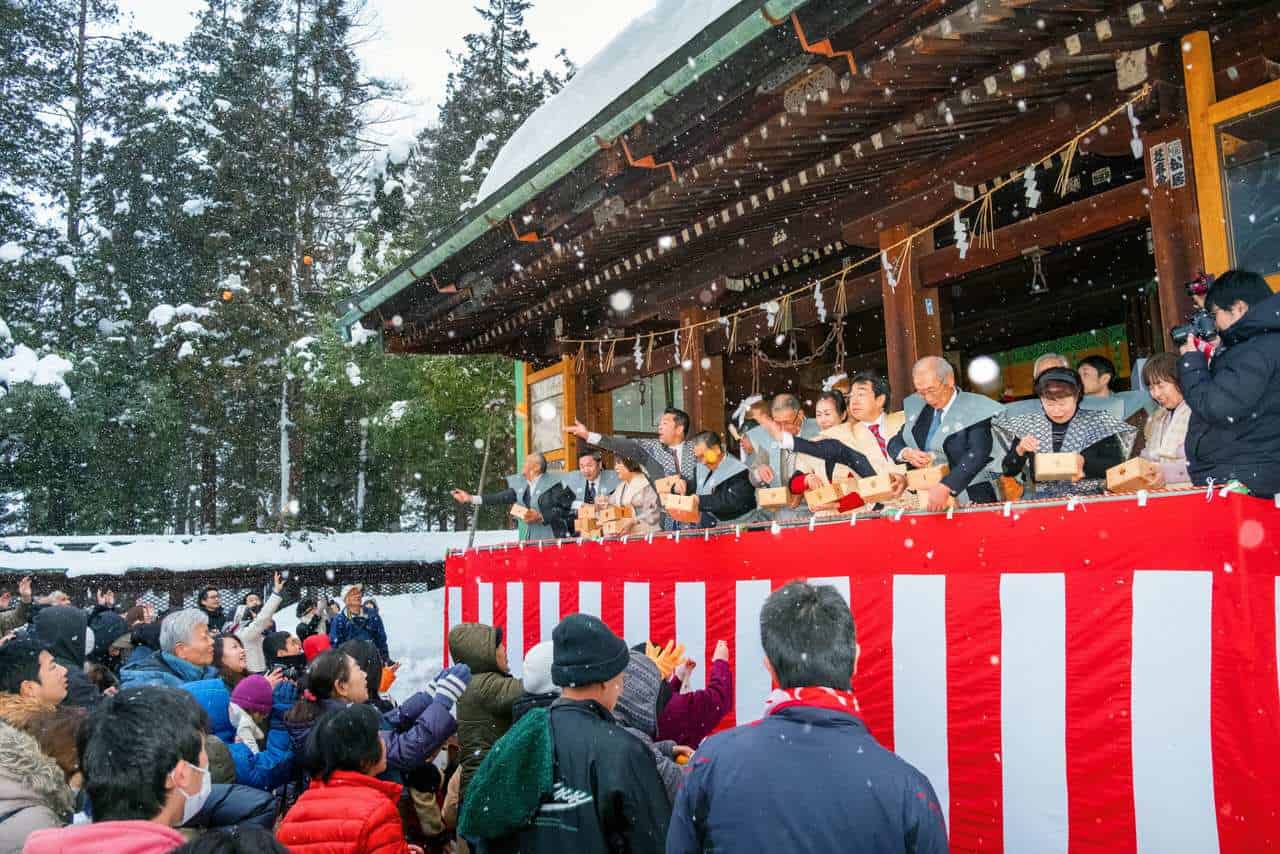 Speaking of Setsubun (節分), or a term that literally means dividing seasons, many Japanese would recall their childhood memories of mamemaki (豆まき): a game-like, family event that involves scattering beans and chanting “鬼は外! 福は内!” (“Evil out! Luck in!”) around the house during this time.

Even many Japanese wonders what is the relationship between beans and the seasonal division actually is. While the seasonal division can trace its origin back to the Chinese lunar calendar, the beans scattering ritual is believed to be an original Japanese custom that was derived from past customs and rituals in the Imperial Palace and was adopted by the masses around the 15th century.

Setsubun generally falls on February 3d, the day before the official arrival of spring depending on the year. Evil – or bad luck such as sickness in this context – is thought to be able to sneak in more easily at the turn of each season, so people in the past began various customs to try chasing it away. Mamemaki has become the most commonly practiced among these customs.

Mamemaki is an event that takes place on the night of Setsubun. During this time the head of the household (father or the oldest son) traditionally tosses beans out of opened windows and doors of the house and chants “鬼は外!” (“oni wa soto!”), then close them and chant “福は内!” (“fuku wa uchi!”). Starting from the center of the house, the tossing will end at the entrance hallway to symbolically chase the evil out of the house.

In recent years, the custom has evolved into having the father wear a mask that resembles an oni (鬼 – demon), and have beans thrown at him by family members (usually children) who are singing the chant. A more precise version of “chasing away” the evil!

Setsubun, a tradition with beans

As for the reason for using beans instead of anything else to fight the evil (why not something stronger, like rocks?). The pronunciation of beans, mame (豆), can be the same as that of “eyes of the devil” (魔目, ma-me), as well as “to expel the devil” (魔滅, ma-me). Hence why Japanese throw beans at the eyes of the devil to expel evil!

Another (friendlier) version is that beans are readily available and are easy to clean up when the ritual is done. For this reason and depending on the region, you may find families using peanuts or other alternatives as well.

Important points to have in mind

For those who are tempted to try the custom this year, there are very important points to note – or you might get adverse effects!

Firstly, the beans to be used are not just any beans, but fukumame (福豆, “good luck beans”), which are roasted soybeans. You may find them at special seasonal corners in supermarkets, sold in packs or in paper/wooden square containers (枡, masu). The beans must be roasted because you don’t want them – meaning the bad luck – to take root after you have scattered them around the house!

The ritual should be done at night

Secondly, the ritual has to take place at night, as evil prevails in darkness. While it is the head of the household who conducts the ritual, all family members should gather and participate. We do not want to miss out on anyone, do we?

Not just Scattering, but Eating!

After scattering, each family member should eat the number of beans according to his/her age, plus one more for the new year, to welcome good luck. You could alternatively make a fukucha (福茶, “good luck tea”) with the fukumame, considering eating a large number of roasted beans might not be desirable for the older members of the family.

To make a fukucha, simply pour boiled water into a cup with the beans in it (which does not necessarily need to be the number of your age). Some people also prefer to add shiokonbu (塩昆布 – salted kelp) and umeboshi (梅干, pickled plum) for the taste and … even more good luck!

Also, it is typical to eat ehoumaki, a type of nori-rolled sushi. If you want to know more about it, check out our article where we talk about this type of sushi.

Whether mamemaki can help you avoid getting sick or not, it is still a fun way to start the new year, especially for families with small children. So why not scatter some beans on February 3d this year to bring some joy, if not luck, to your home?