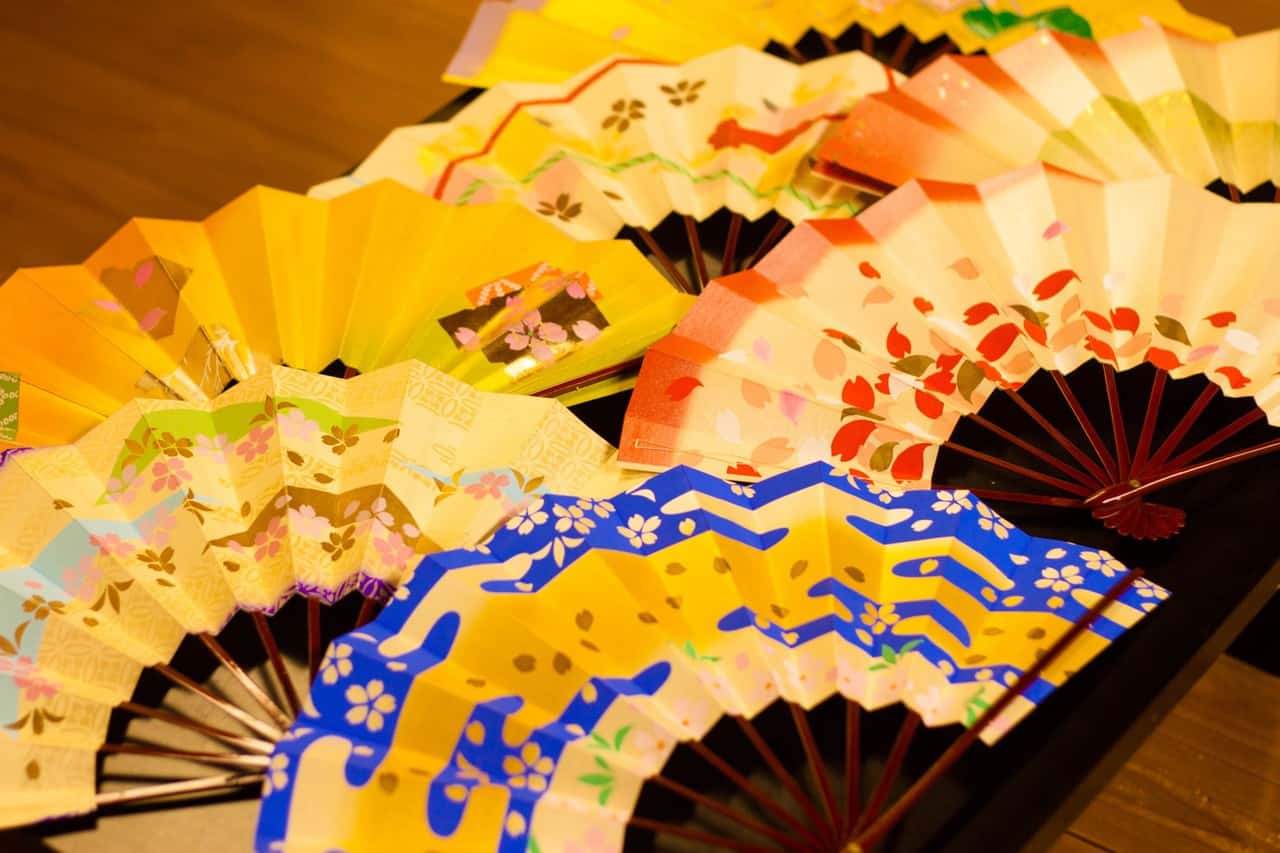 Koriyama city is located in central Fukushima Prefecture. Because of its convenient location, and because both the Tohoku and Banetsu Highways and the Shinkansen run through the city, it acts as the commercial capital for Fukushima Prefecture, drawing visitors from many different prefectures to the city center.

I recently had the opportunity to travel to Koriyama to experience some of the unique traditional aspects of Koriyama culture firsthand.

The first stop on my trip, and probably one of the most sought after experiences for foreigners traveling to Japan, was the opportunity to dress in a traditional Japanese costume, the Kimono. I was also taught the basics of the traditional Nichibu dance, a performance art that mixes dance and pantomime. I was also given a brief glimpse into the etiquette of Japanese Tea Ceremonies, and while it was quite a whirlwind of information, I will do my best to share my experiences here. 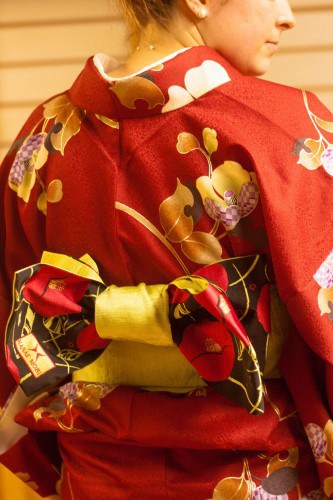 History of the Kimono

Traditionally the word “kimono” referred to any sort of clothing, originating from the Japanese word “ki,” “to wear,” and the word “mono” or “thing.” Today however, the word refers to more traditional Japanese garb since Western clothing has been widely adopted throughout Japan. This traditional style of Kimono became popular during the Heien Period (794 – 1192), and these days is reserved for special occasions such as weddings, tea ceremonies, festivals, and the like.

Throughout history, the style and fabrics of the kimono changed often, adapting to the needs of the people. From more formal layered kimonos to a focus on color combinations, to the lightweight “yukata,” the kimono is a versatile piece of clothing. 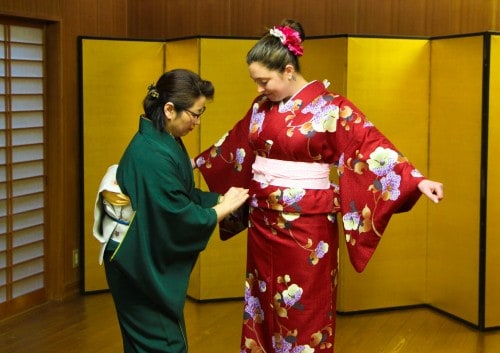 How to Wear the Kimono

Kimono’s can be worn with up to 20 layers of contrasting colors depending on the formality of the situation. During my time with the experienced women who run the Folklore Costume Cultural Association, I was dressed in five separate articles of traditional clothing, which made for a much more streamlined experience. I can only imagine how long it would take to get dressed for a formal event.

When I arrived, the women ushered me into a large room and immediately sat me down in front of an array of colorful fabrics. “Choose your favorite” they said, gesturing at the fabrics. I chose a deep burgundy fabric, decorated with large flowers; my choice was met with enthusiastic oohs and ahhs of appreciation, which admittedly caused me to feel incredibly pleased with myself.

Next I was led into a small changing room and followed by two women who helped me change into the first layer of the kimono.

The “hanjuban” is an undershirt worn to prevent the kimono from becoming soiled due to sweat. Usually the wearer would dress in a full-length undergarment called a “nagajuban,” but because of the nature of the experience, it is easier and more sanitary to allow the wearer to keep their pants or leggings on and just wear the “hanjuban.” The undershirt was tied closed with a sash called a “datejime,” and as quick as that I was ready for the kimono itself.

The women slid the beautiful red fabric over my shoulders and adjusted the length using a different “datejime,” tucking the fabric under the sash to create a perfect fold at my waistline. They slid a pair of “tabi” (white socks, which are designed with the big toe separated from the rest) onto my feet and ushered me out of the changing room. Finally it was time for the “obi.” 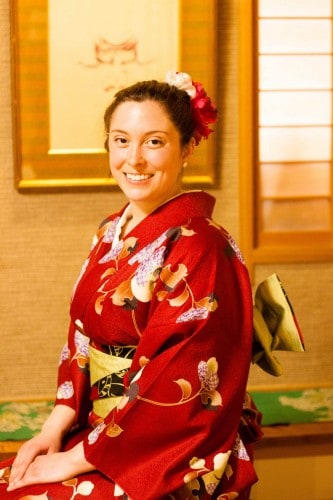 The “obi is an important part of the kimono costume. The long rectangle of fabric acts as a belt of sorts, but is mainly decorative. Usually the obi is meant to add an aesthetic contrast to the kimono’s fabric, and different methods of tying the “obi” can have different meanings. This is arguably the most complex part of the costume, and my friendly assistant took great care in carefully folding my obi at an angle to show off the contrasting pattern of the sash fabric before tying it in an elaborate bow at the back.

After a quick photo shoot, I was led to a stage and offered my choice of fans. It was time to learn the basics of Nichibu dancing. 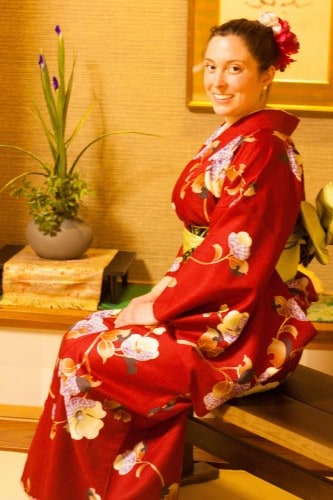 Nichibu or Nihon Buyo is a traditional dance style, which originated during the Edo Period and later became the basis for Kabuki Theater. It often involves the use of props such as fans, and focuses on the movement of one side of the body at a time. There are two main forms of the Nihon Buyo dance, a style meant for men, and a slightly different style for women. 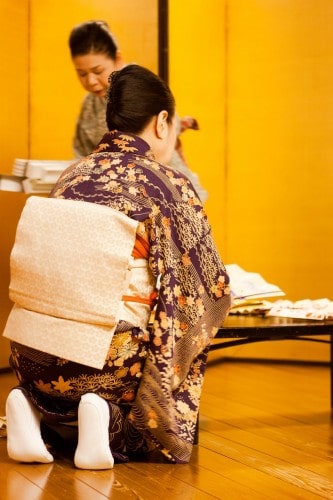 The women’s style of the dance involves sinking down with knees bent and touching, feet slightly pigeon toed, and using circular motions with the prop as a form of expression. 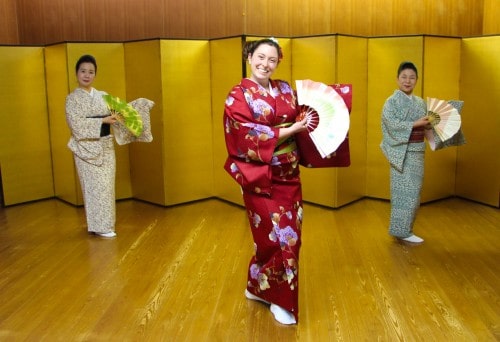 Learning the Steps of Nichibu

After choosing my fan I followed my Nichibu teacher onto the stage. We began with the fan tucked into our obis and she showed me how to gracefully collapse into “seiza” (a seated position, with knees tucked under the body).

Next she showed me the correct way to remove my fan, place it on the floor in front of me, and bow to my audience. From here she walked me through some seated movements, and the positioning of my hand on the fan.

We then moved on to standing positions, and I was able to really get a feel for the symmetrical movements of the Nichibu dance. She showed me how to gently twist my fan in the air to emulate the falling of cherry blossoms, my body following the motion of the fan and lowering as the fan did.

Overall the dancing was a really unique experience for me, something that I would not have otherwise tried or known about had it not been an option with this service. The instructor was amazing, and laughed as she gently yet forcibly pushed my body into the correct positions, tugging on my collar to show me how to keep my back straight, and pulling on my obi to teach me where my center of balance should be. 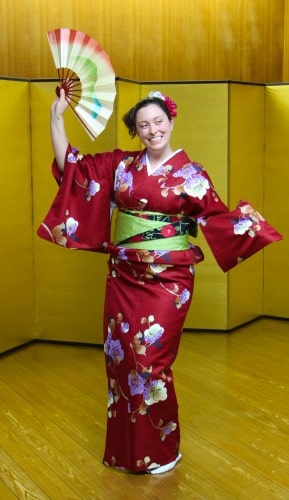 As my final introduction into Japanese culture and tradition I was given a short explanation of the etiquette required while drinking Japanese tea. My tea ceremony teacher was kind enough to have an explanation in English, which she quickly procured from beneath her obi, using it for reference, as she explained the correct way to enjoy my tea.

She set a napkin with Japanese sugar sweets in front of me and explained that I should eat the sweets first. After I had done so, she showed me the correct way to pick up and hold my cup, one hand below, and another cupping the side of the large ceramic teacup. She explained that before drinking I must turn the cup clockwise, in order to admire the beauty of the decorated cup. This was also an important step in order to turn the most beautiful decorations away from myself. This step ensured that when I drank from the tea cup I did not touch the decorated section with my lips, as it is considered rude to do so. 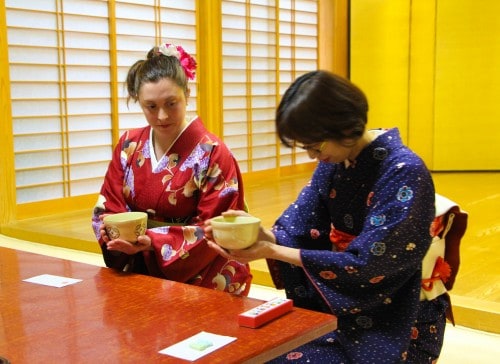 My experience was wonderful; everyone was incredibly kind and friendly, laughing along with my blusters and praising me for how quickly I learned. I would recommend going with a group of friends to take some of the pressure off of you, as it can be a bit overwhelming, but please do take the time to try out this wonderful service. 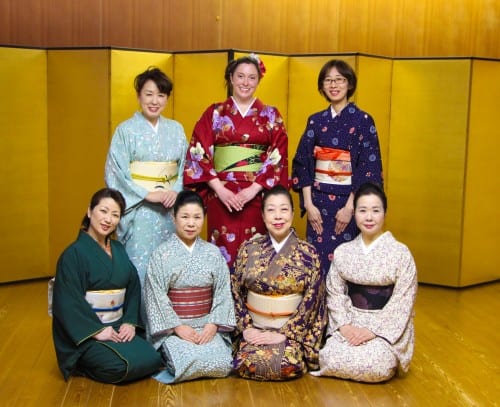 From Koriyama Station it is a 4-minute walk to the Cultural Foundation House. Please check out the website for more information.

Name: The Cultural Foundation for Promoting the National Costume of Japan