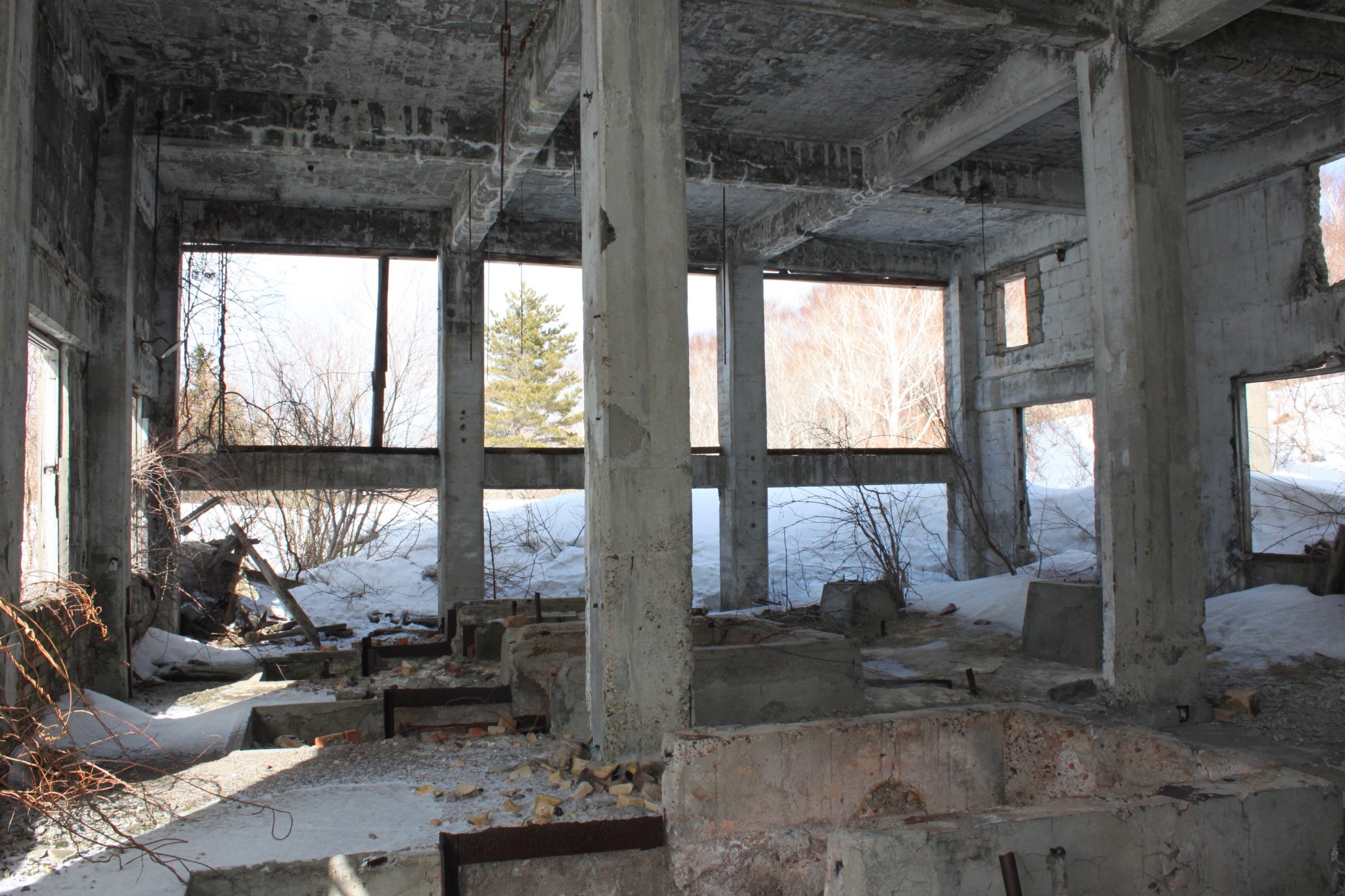 A friend of mine told me that when she was a child, the Kitakami River ran red. It wove its way through town, staining the banks the color of blood. There were no fishermen waiting by the shores, there were no fish. This was an effect of the sulfur mine upstream, Matsuo Kouzan. 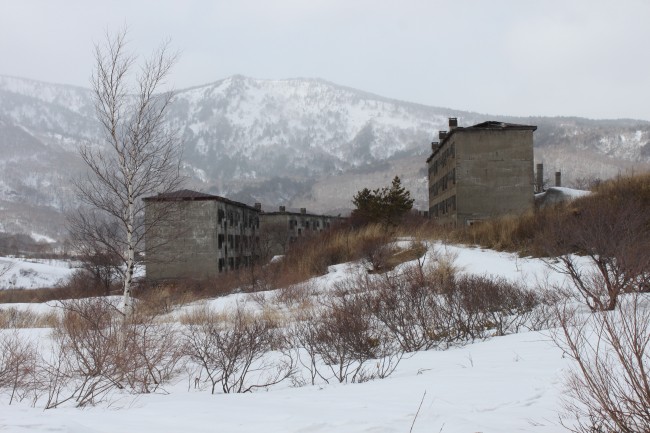 Matsuo Kouzan, an abandoned mining town, rests about an hour north of Morioka, in Hachimantai. Matsuo Kouzan was the largest sulfur mine in Japan, accommodating around 15,000 mine employees and their families in the apartment blocks nearby. 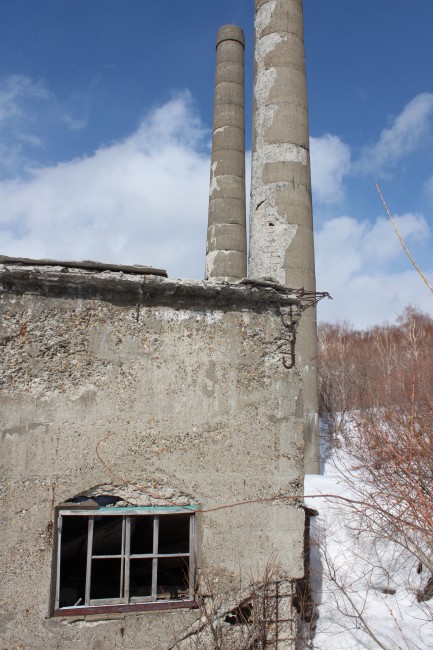 The Matsuo apartments were abandoned in the late 1970s after the mine closed in 1969. But the ruins still stand, often shrouded in mist along the Aspite Line leading to Akita. 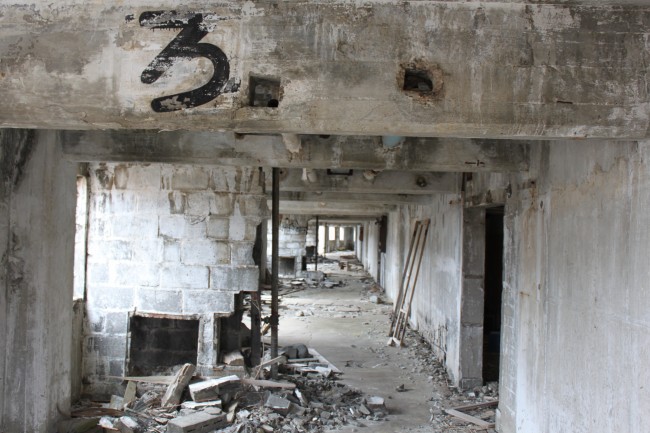 I am fascinated by abandoned buildings; the mystery and sense of enveloping time draws me to them. Witnessing how nature has reclaimed those skeletal structures reminds me of my own vulnerability, of our own brief lives. Japan is filled with abandoned ruins. Even along the busiest streets, you can see houses collapsing with age. In Japan the tax system encourages people to build new homes, leaving whatever other properties they have to rot. It’s cheaper than tearing them down, which explains the multitude of empty houses and unused buildings. 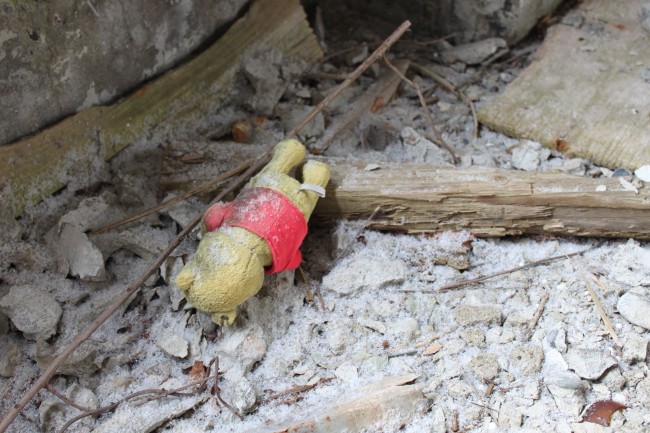 My first time going to Matsuo Kouzan, we were headed home from a trip to the coast. I had been in Japan only a few months and had no clue this place existed. My friend stopped the car and pointed to the right, at the buildings leaning out of the ground like gravestones. The rolling green mountains were a backdrop against the ash grey apartment complexes. We didn’t venture inside. Exhausted from the long trip, we opted for a quick hot spring soak instead, but I desperately wanted to explore the crumbling concrete blocks. I managed to make it back almost a year later. (Despite the close proximity, it is a bit of a hassle to get to without a car.) 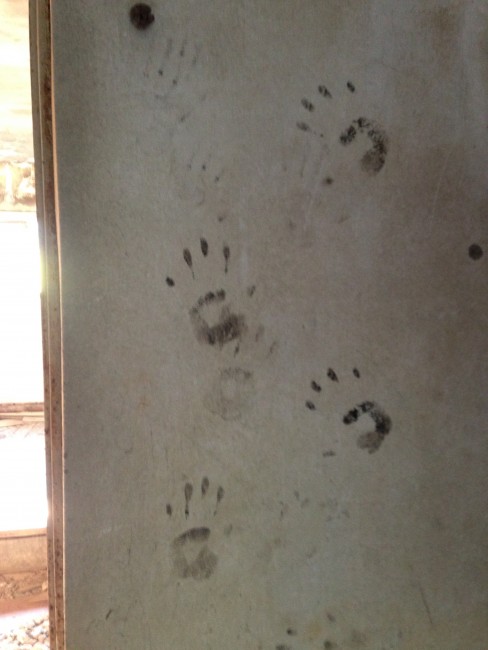 On my second trip to Matsuo Kouzan, I was with a more adventurous group. As we walked down the paved path parallel to the buildings we told each other ghost stories, fearless because it was mid-afternoon and the sun was shining. We had to force a bit of a path through the undergrowth and snow to reach the closest building, but it was clear other people had traveled through the area recently. 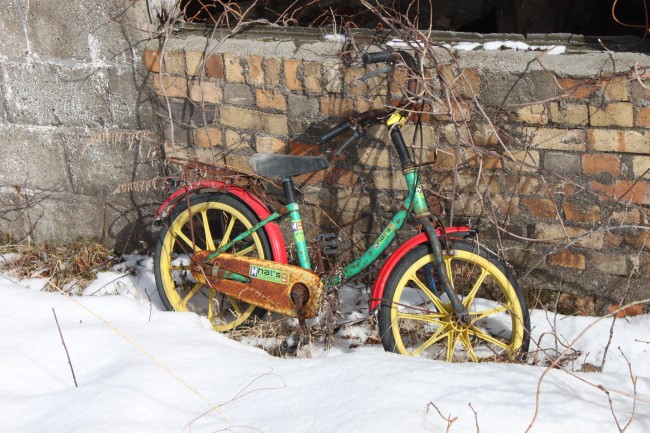 There are 11 apartment buildings, and each block raises four floors from ground level. Entering the closest building through a giant hole in the cement, the hallway stretched before us. Rubble and crumbling concrete spilled off of the walls in heaps, and BB pellets littered the floor. Graffiti was smeared across some of the walls, and small trees and shrubs had pushed themselves through the concrete floor, their roots finding purchase among the rubble. 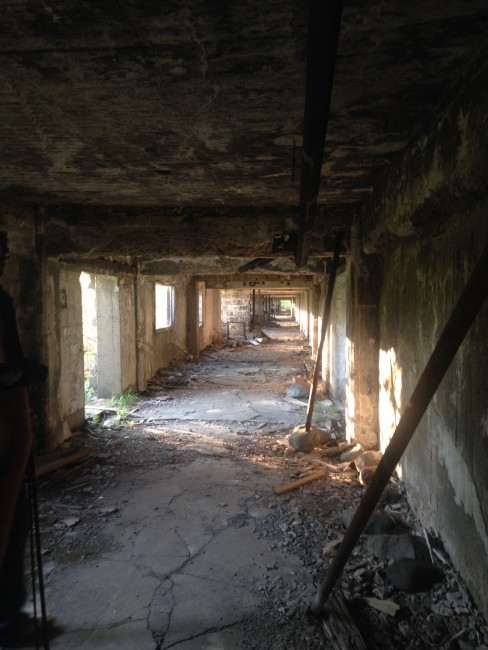 We wandered the bottom floor, ducking our heads into rooms littered with abandoned personal belongings. A single shoe left behind in the hallway, a half-empty glass bottle of medicine, forgotten on the shelf. Most of the porcelain and pipes used in the bathrooms had been scavenged or broken. Wandering up the central stairs, we found the public baths; a large concrete tub occupied the center of the room. The ceiling had partially caved in, and we were cautious about walking in too far so we headed back, careful about where we placed our feet, as many of the floor boards were rotting. 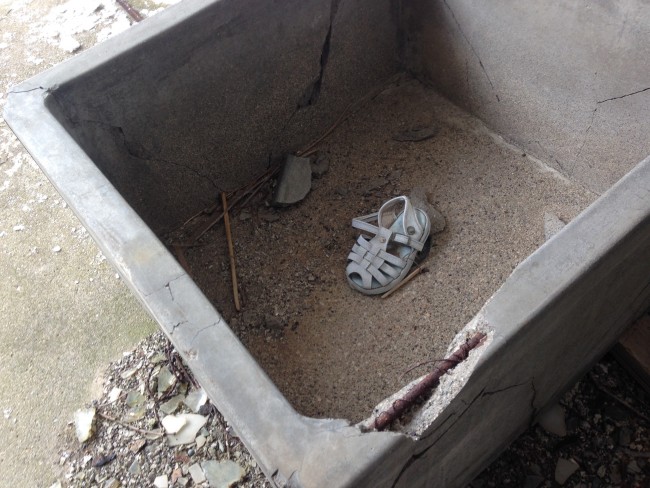 We headed up a concrete staircase and made our way to the roof. A fog had started to descend, partially obscuring the furthest buildings. But we could see them, laid out before us among the emerald green hills. Some of the buildings looked as if they were floating, appearing out of the fog like a ghost city. Suddenly our stories from earlier seemed a bit more believable, a bit more real. Our revelry dampened, we headed back down and out of the building — a bit quicker than we had entered. Back to the safety of our cars, we drove home. 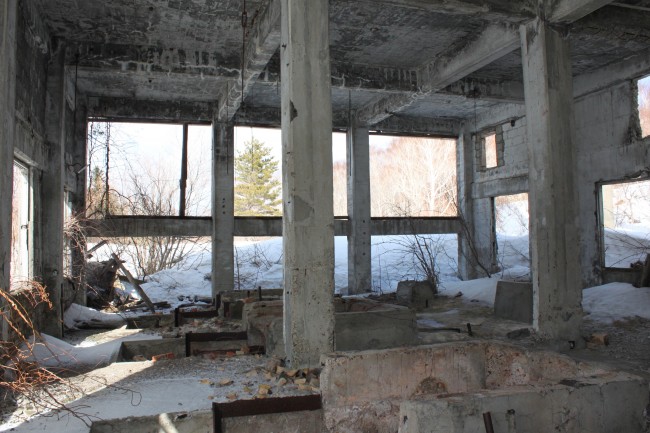 Matsuo Kouzan, despite its relatively unremarkable history, remains an eerie place. That is the nature of abandoned things. At first they seem sad, forgotten, lonely. But after time, they gain a kind of power. Their disuse and emptiness is something found in stories, and something to inspire stories. The haunting absence of humanity in such a human place makes them remarkable in their own way. 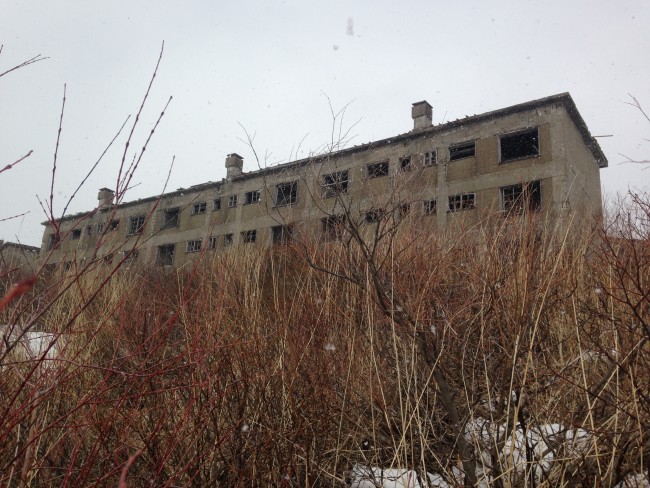 Disclaimer: Matsuo Kouzan is meant to be viewed from the paved road outside. Photos are allowed from the road only. If you decide to enter the buildings, you do so at your own risk.

By bus:
Matsuo Kouzan can be reached by bus from Morioka Station bus stop 3. The only bus that goes the entire way is bus A01. The bus leaves at 9:42 in the morning and arrives at Midorigaoka at 11:05, the total cost is 1,090 yen. From Midorigaoka the only return bus leaves at 4:02 pm.
Alternatively, you can take buses A13 or A11 from Morioka Station bus stop 3, and get off at the Matsuo Kouzan Shiriokan bus stop. From there you can transfer to either bus A21, or A22 towards Midorigaoka. These timetables are a bit more flexible.
Be sure to stop by the tourist information center in Morioka Station to pick up a time table of the bus routes. The women in the tourist information center speak excellent English and are always willing to help.

By car: From Morioka, take Route 4 towards Hachimantai. Follow the signs toward Route 23 and the Aspite Line. From the Aspite Line, you will see a small sign on the left hand side, directing you toward the Matsuo Kouzan viewing road.