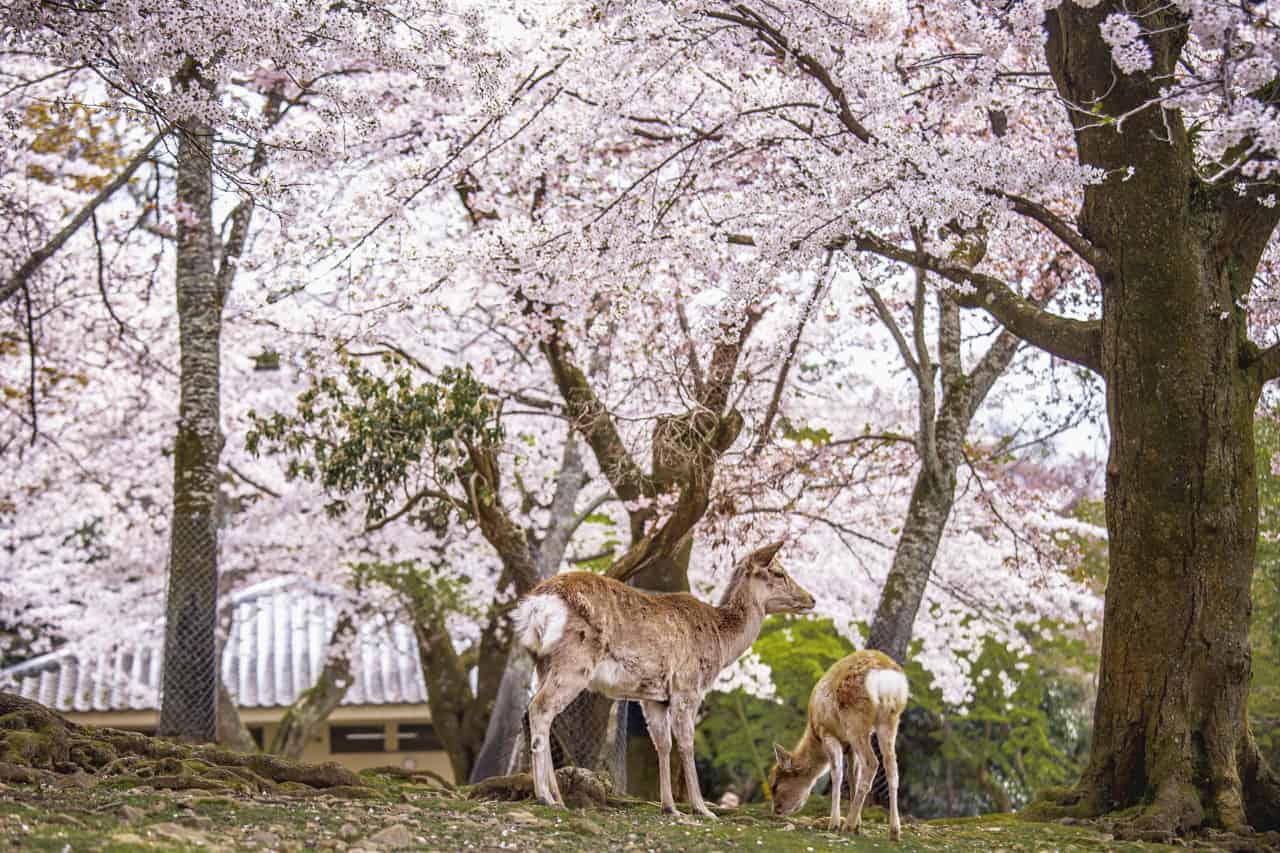 Sakura in Nara: Cherry Blossoms Surrounded by Tradition and Deer

Nara is one of the most popular tourist destinations in the Kansai region, and in spring its mountains, parks, and villages are shaded white and pink when the cherry blossoms are at their peak. Here, as in all of Japan’s prefectures, thousands of people come to celebrate the arrival of spring under a sky of these ephemeral flowers.

Nara was the capital of Japan from 710 to 784 and its streets still retain the traditional atmosphere of that time. Today, it is famous for its cultural and natural sites, which have been recognized as World Heritage Sites by UNESCO. And for its deer, which have become the emblem of the city.

But the sakura (桜 – Japanese cherry tree) is not only one of the Japanese symbols for its beauty. It’s also a metaphor for the transience of human existence. So, is there anything better than enjoying the popular Japanese hanami among temples, shrines, and deer?

Nara Park, a walk among deer and power spots

Nara Park (奈良公園), with more than 600 hectares of nature, is one of the main attractions of the city. It is located at the foot of Mount Wakakusa (若草山) and is home to some historical monuments that were declared a World Heritage Site by UNESCO in 1998. As if this were not enough, it is also the habitat of more than 1200 domesticated sika deer (鹿 – shika in Japanese) that have even learned to bow to visitors for food.

The Historic Monuments of Ancient Nara were declared a World Heritage Site by UNESCO because they are a representation of the political structure, tradition, and culture of Japan during the 8th century.

The Historic Monuments of Ancient Nara comprise five Buddhist temples, one Shinto shrine, one palace, and a primeval forest.

Nara Park’s deer are protected by law and have been designated as National Treasure. In the Shinto religion, deer are considered messengers of gods. According to local folklore, Takemikazuchi, god of thunder, rode into Nara city on the back of a white deer.

Today, the 1200 sika deer that inhabit Nara Park are friendly and accustomed to visitors, who often feed them with shika senbei, rice crackers that can be purchased in the area. If you hold one of these crackers over their head, they will make a graceful bow.

When is the cherry blossom season in Nara?

Nara is not only home to temples and deer. In spring, more than 1,700 cherry trees burst into bloom turning the park into a living fairy tale. Cherry blossoms normally begin to bloom during the last week of March and their flowers can be enjoyed until mid-April, with their peak in early April.

But cherry blossoms are not an exact science and there are years in which they bloom earlier or later. Therefore, my recommendation is to consult the official forecast made by the Japan Meteorological Agency with the updated information and possible changes. There is also detailed information for every region.

Where to enjoy sakura cherry blossoms in Nara Park

Visiting Nara Park at any time of the year is an unforgettable experience. But it is especially beautiful during sakura season. Watching the deer resting peacefully on a bed of fallen petals, or strolling and even picnicking under a sky of flowers. Sounds good, doesn’t it?

I arrived at Nara Park on April 3, at the peak of the blooming season. It was a rainy and gray day, but that didn’t stop me from enjoying the beauty of the sakura trees. When I immersed myself in the nature of the park, I discovered that there were cherry blossoms practically all over the place. My recommendation is to spend a full day in Nara so you can stroll around the park and visit the many temples and shrines that are scattered throughout the area.

Himuro (氷室神社) is a Shinto shrine that houses an impressive shidare-zakura (枝垂桒桜). This cherry tree is the one that heralds the arrival of spring in Nara city, as it is one of the earliest species to bloom. In addition to the shidare-zakura, there are also other species of sakura whose white flowers contrast with the crimson red of the torii gate at the shrine’s entrance.

Himuro Shrine is located very close to the Nara National Museum, one of the main museums in the country where you can enjoy Japanese Buddhist art.

Kasugano-enchi (春日野園地) is located southeast of Todaiji Temple and is a large grassy esplanade surrounded by cherry blossom trees. It is the perfect place to enjoy a picnic or to relax on one of the benches scattered around the site.

Here, as in most areas of the park, there is a multitude of deer that often approach visitors in search of food and attention.

Chayama-enchi (茶山園地) is a small forest hidden at the foot of Mount Wakakusa. When the cherry blossoms begin to fall, they cover the ground forming a carpet of petals where deer rest peacefully. Although it is a quiet place, during the sakura blossom season visitors come to admire the flowers of Nara no Yaezakura (奈良の八重桜) and Nara no Kokonoezakura (奈良の九重桜), two famous cherry tree species in the area.

The Ukimido Pavilion (浮見堂) seems to float on the waters of Sagiike Lake (鷺池). It is a hexagonal wooden construction accessed by a bridge built of the same material. It is a recurring scene for Japanese couples who come to the place for their wedding photoshoots.

In spring, the cherry trees that surround the lake form a floral frame of the pavilion and its impressive reflection in the water.

Sanjo-dori (三条通り) is the main street of the city and runs from Nara Park to JR Nara Station. It is lined with stores, hotels, and restaurants. Just in the area closest to one of the entrances to the park you can enjoy the cherry blossoms and their white and ethereal petals on the roofs of the traditional souvenir stalls.

Visit the cherry blossoms on Mount Wakakusa in Nara

Mount Wakakusa (若草山), 342 meters high, rises on the skyline of Nara. Its summit is easily accessible even for the less intrepid via two paths with several routes. This grassy mountain is divided into two areas. The first one can be reached after a climb of about 15-20 minutes. It is the ideal place to enjoy the views of the city and regain strength to continue the way to the top, which you can reach after another 20-30 minutes of hiking.

To access Mount Wakakusa, also known as Mount Mikasa, there is a small fee of 150 yen and it can only be climbed between March and December. When I arrived at the ticket office I was told there were two ways up, north and south. The popular sakura is lined up along the north path, so I decided to climb the south to enjoy the cherry blossoms on my way down the mountain.

Although I am not an expert hiker, my climb to the top was short and easy. The steps were in good condition and not too steep. After a few minutes of climbing, I reached the first half of the hill, where the peaceful deer were waiting for me on a large green grassy esplanade. There I sat down on one of the benches to relax and enjoy the wonderful views of Nara city.

A descent among cherry blossoms

My purpose during this visit to Wakakusa was to contemplate the cherry blossoms, and the woman at the ticket office had warned me that they only reached halfway up the mountain. So I decided to leave the climb to the peak for another time and I set out to descent by the north path, the path of sakura.

Very close to small construction, I found the first cherry trees that gave way to the beginning of my descent. This route is somewhat more complicated than the one I had taken to ascend. In some parts, the path is covered by some stones and tree roots. After a short stretch of intense green nature, the expected sakura appeared. Their petals covered the rest of the trail and accompanied me until I reached the foot of the mountain.

For an inexperienced mountaineer like me, it was a very rewarding experience. Perhaps, if it were not for the cherry blossoms, I would never have dared to climb the mountain because of laziness or fear of not being able to achieve it. This experience taught me that when there is a goal, it doesn’t matter how high the mountain is or how difficult the path is. The important thing is perseverance and not giving up. And in this case, the sakura was a worthwhile goal.

How to get to the sakura cherry blossoms in Nara Park

Alternatively, the Nara City Loop bus, easily recognizable by its vibrant yellow color, runs from both stations to Nara Park. It also makes several stops at different locations within the park. The Nara Kotsu map shows the places mentioned in the article where you can see the cherry blossoms in Nara Park and Mount Wakakusa and shows its route marked in yellow.

Nara Park is full of interesting places. It is home to some of the country’s finest temples and shrines, one of Japan’s most important Buddhist art museums, a giant Buddha, and over a thousand friendly deer. Enjoying this incomparable scenery of nature and culture along with the beauty of the cherry blossoms makes Nara a must-see during the early spring.