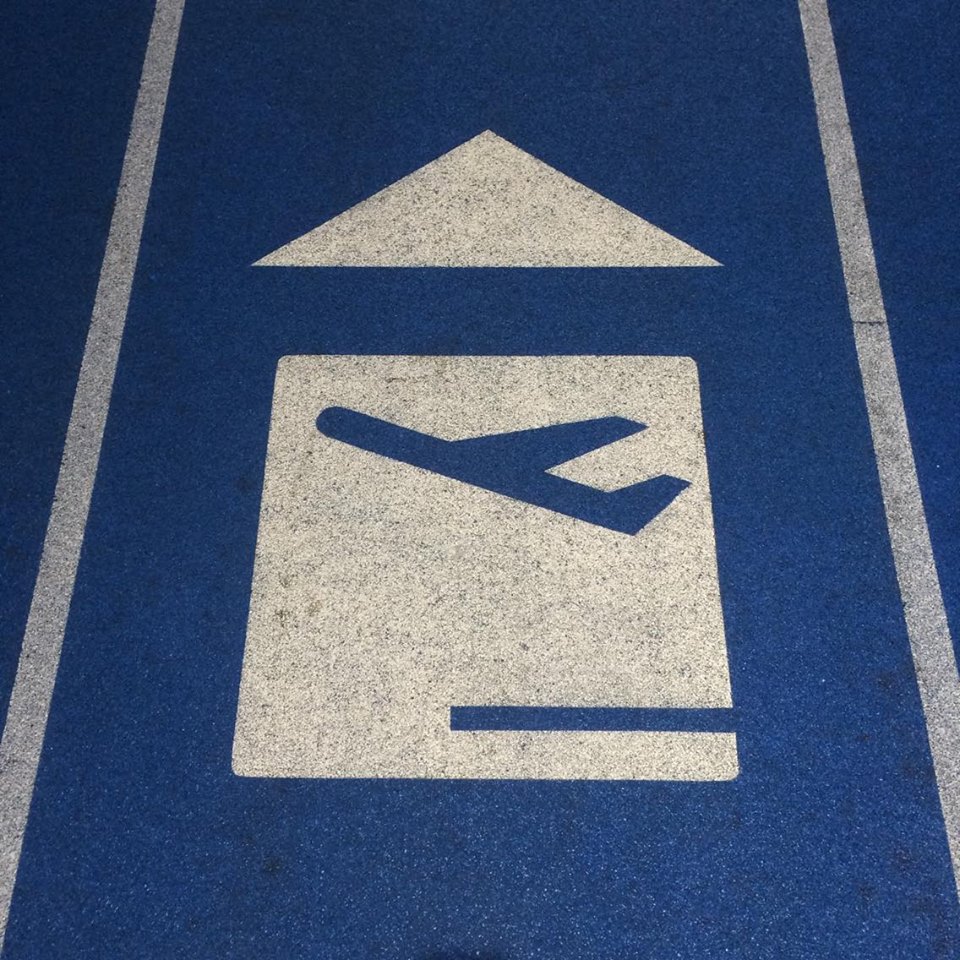 Tokyo – images of a city sparkling through starless nights and Japan’s international hub. Narita International Airport – international, though as I discovered at 12:30 am, certainly less accessible and international a place than Tokyo. You will be wearied by travel after arriving at Narita, but if you arrive by foot and hitchhike through the Narita hills as I did, you might find yourself sleepless.

Narita airport is fit as a beacon for its fleet of incoming and outgoing flights, of such berth that it possesses two train stations. Though these stations shut at night, the eyelids of many stay open terminally. 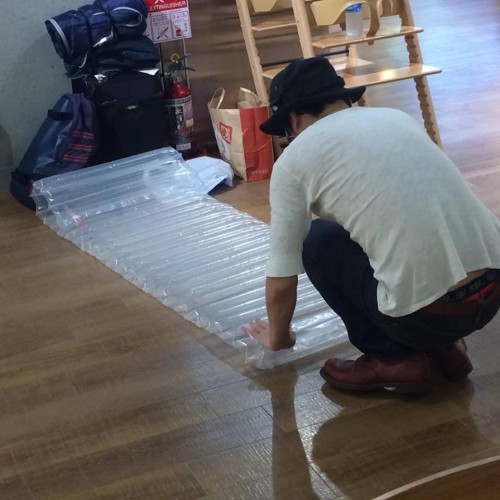 My terminal was number 3, domestic and outbound.  After we were hitchhike hosted and dropped off, it was one in the morning. We followed the blue strip of AstroTurf, continuing outside for half-a-kilometer from the drop-off area inside. 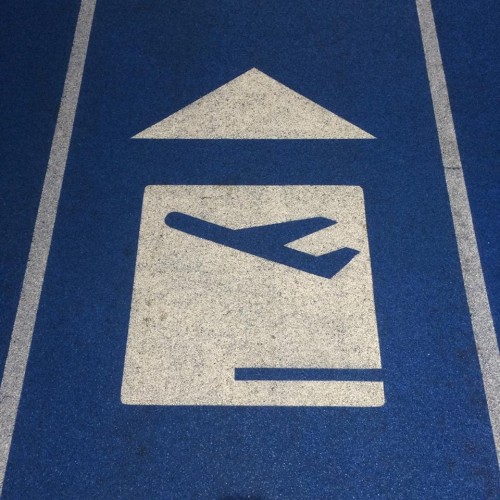 Terminal 3 is a LCC (Low Cost Carrier) terminal, while the actual building was built with minimal funding. The AstroTurf strip is one such cost-cutting measure against automated walkways. Gliding down like planes to a lengthy runway, we had an unswerving view of the peripheral surroundings. The lone open Lawson convenience store was stocking the shelves, and I bought some apple juice and spent some time talking to the unusually friendly cashier. Eyes peeled to apple white, we wandered along the AstroTurf lane. 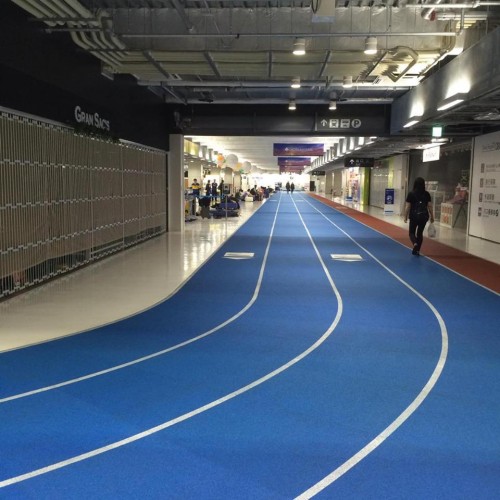 Some people slept near the baggage-weigh stations and ticket kiosks, oblivious to all people nearby. Mid-travel midnight malaise was in their sleeping shapes. 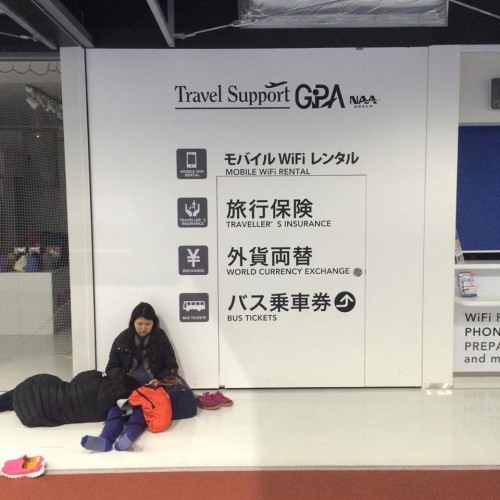 Where that smooth AstroTurf diverts and fit for the restless, terminal 2 opened to a wide and phosphorescently-lit food court. Many sat and waited, one woman drumming on her phone playing a game. Seats were plenty, though those sleepier could hide under the table away from the beaming bulbs. Many had transparent mattresses, perhaps provided by the airport. 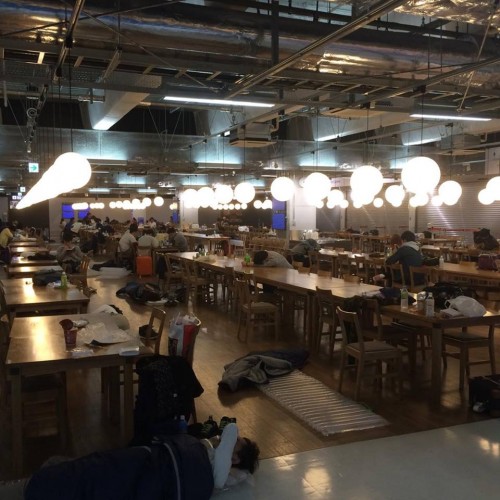 The Food Court and Lounge

The food court functions as a 24-hour-lounge. Some wearing sports camp shirts chatted nearby until the restaurants opened their shutters at four in the morning. Although the space and other amenities are available through the night, you can munch on a burger or takoyaki for a meal beyond the normal three only after 4:00.

Charging stations line wide counter spaces in the food court. Water dispenses cleanly from nearby fountains; basic sustenance for the self and the cellular. Keeping yourself awake with a cool drink, you can keep the phone awake with good use. Narita offers free wi-fi, an amenity not as prevalent in Japan as other countries. 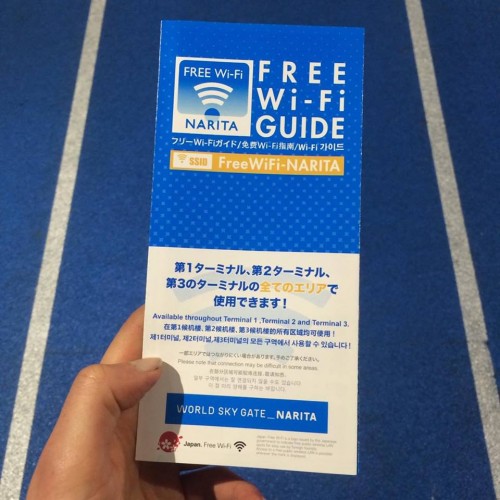 When the eyes sag sleepy, Terminal 3 is also outfitted for a good sleep. Courtesy of the Muji brand, lounge sofas seeming more like leather-cushioned king-sized beds falling to the side of the food court. Use of these beds doesn’t require any fee. If you’d prefer tatami, you can stay in terminal 2.

Terminal two has both sleeping and reading spaces, and the Japan’s omnipresent energy source the vending machine. The sleeping space is characteristically Japanese: a small platform of bountiful tatami. I have slept on such mass bedding on ferry boats, and it permits a good stretch. While the Terminal 3 Lawson is open all hours, Terminal 2’s vending machines also offer “food, confectionery and ice cream.” 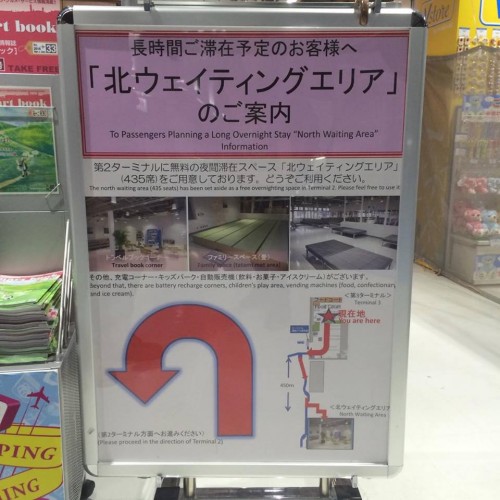 With Narita’s lengthy passageways, you might prefer staying at whichever terminal you arrive. Taking advantage of all its goodies, an overnight layover can be made into an exploratory sleepover.