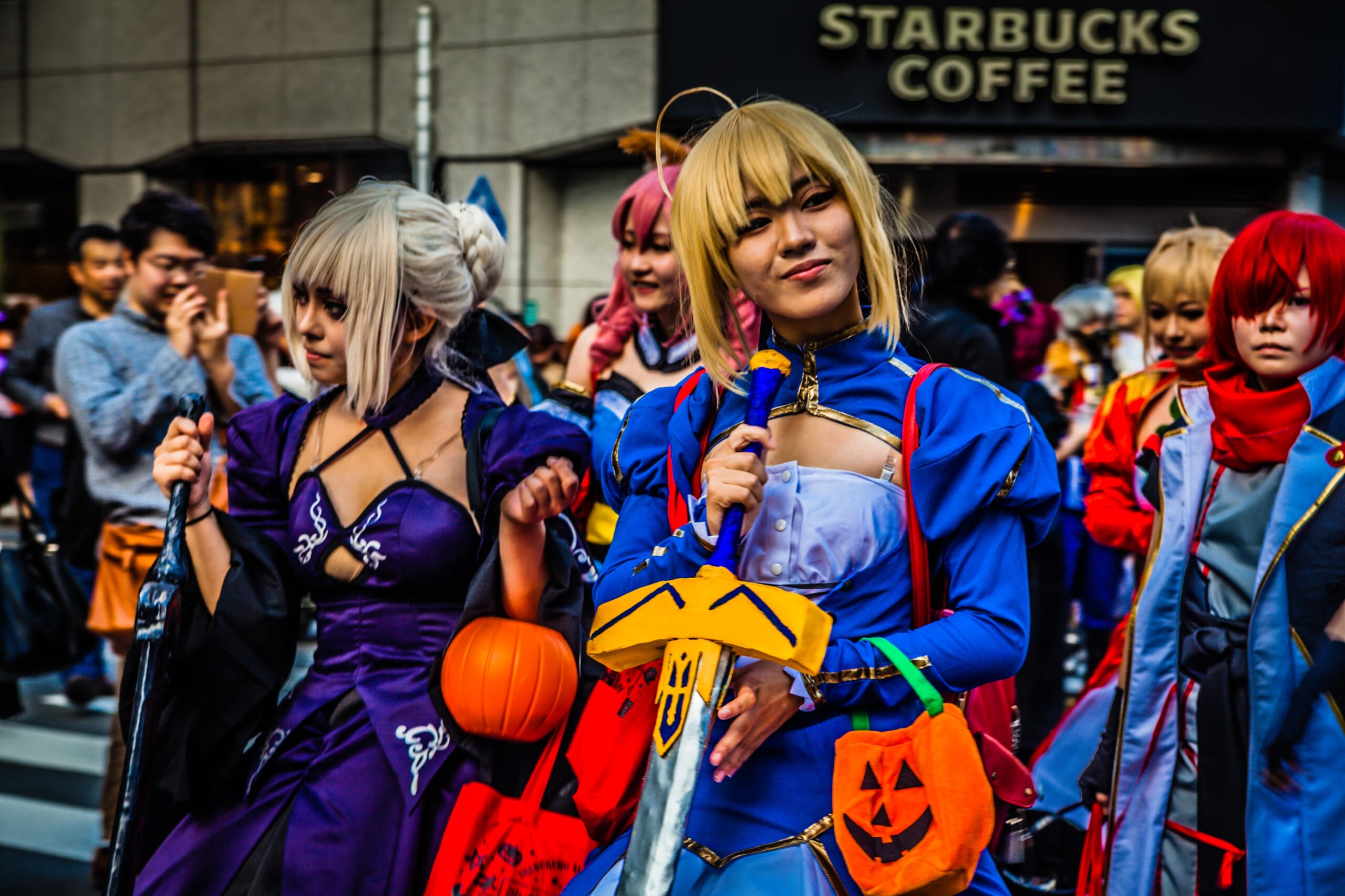 Halloween in Tokyo: No Sleepy Tales

To talk about Halloween in Tokyo is to talk about two parallel stories that only share a name. In another article, we explained the origin of Halloween in Japan as a sales strategy created in Harajuku. But truthfully, this is only half the tale. The most palatable face of Tokyo’s Halloween is one shown under the commercial tutelage that cultivated a Halloween brand suitable for the whole family to enjoy. It is the face we see in places like the annual Omotesando Parade or in Disneyland, where elaborate costumes and commercial entertainment are arts that have been refined over the course of more than two decades.

Despite being a relatively recent celebration, Halloween has become one of the most famous events in Tokyo. Quite possibly, the one most people congregate for on the streets without a lot of institutional support. But beyond being a massive party, Halloween is also a social phenomenon that has entered Japanese society like a wrecking ball.

There is a darker story about a raw, spontaneous, and wild festival not suitable for minors. No planning, no refinement, and scares by the dozen. Imagine an outsider that’s coming at you with some hard-to-swallow truths without a care in the world about your feelings. That’s the way Halloween places the whole society in front of a mirror. It forces it to look at itself and reflect on what it is and what it wants to be. The Japanese are very proud of their civility.

One of the usual observations of foreign visitors is the cleanliness of Japanese public spaces. Efforts to leave no trash behind at big events abroad generate headlines that go around the world. But the annual chaos in Shibuya allows little room for excuses: the images and videos that have spread like wildfire on social networks made it clear that the most notorious disorders carry the Made in Japan label. The eve of All Saints’ Day seems to have given carte blanche to the partying Tokyoites. What happened here?

The Origins of the Halloween Mischief

The evolution of Halloween in Tokyo as a crazy street party has its origins in the 90s. At the time, among certain circles of foreigners, the so-called Yamanote Train Party started becoming popular: costume parties and lots of alcohol on the Yamanote line (山手線, the loop train line that covers the most central area of Tokyo) without particular regard for its passengers. These parties’ rowdy spirit was also attractive for many Japanese youngsters, who joined the fray following the trail of the partygoers on the Internet.

The controversy generated among the population by this annual transgression in public space ended up with opportunists from extreme nationalist parties taking advantage of the event in 2009 to march to the train stations and put their xenophobia on full display. Unsurprisingly, the police got involved; strangers and locals that partied madly inside a train are not what Japanese society wanted to see in itself, nor potentially violent protesters showing racist tendencies on international news networks.

From then on, the train celebrations began to decline more and more into the anecdotal. But that only helped them to settle permanently in the streets.

Pics or It Didn’t Happen

We can only understand this within the context of the rise of the Internet and social networks. Part of the event’s point was to record it, photograph it, and hang the trophy on the virtual walls of the most popular pages of the moment. Images of impact as an antidote to the corseted civism, which people release during the witches’ night to blend in with the alcohol and the crowd. And unlike Christmas and Valentine’s Day — the other celebrations imported from abroad — virtue and romance and a significant other are not mandatory.

Going out in a group or alone are equally valid options when any stranger can become your street mischief accomplice. Corporate marketing also began to do its part, advertising Halloween activities in bars or clubs as perfect occasions for the risky and improper. Tokyo, one of the safest cities in the world… we can barely recognize you.

The Morning After Halloween in Tokyo

The problem with spontaneous and ephemeral connections is that sometimes the consequences end up being nobody’s business. It didn’t take long for the lack of individual responsibility of the masses to translate into serious garbage issues. The media and social networks’ bitter complaints about the lack of citizen education were quick to come.

Consequently, the civic response made an appearance in groups of volunteers doing campaigns in social networks announcing affected spaces’ cleaning. The controversy didn’t spare those apparent selfless acts for the benefit of the community, either. Some perceived them as virtue-signaling and a desire for self-glorification, unleashing flames in social networks among different exhibitionism factions. Regardless of their civic nature, the debate centered on whether doing the right thing for imaginary Internet points could actually be considered rightful or not.

A Night to Remember

In any case, the socio-philosophical debate is irrelevant for authorities concerned with public order. The 2018 edition was corrosive enough. So they decided to ban alcohol consumption on the streets during the Halloween partying in Shibuya in 2019. That seemed like the only possible option. That means a remarkable milestone for a highly permissive society with alcohol and drunkenness.

The Main Events of Halloween in Tokyo

This doesn’t mean there aren’t ways to enjoy Halloween in Tokyo while keeping your memory intact the next day. For those not overly enthusiastic about the public disorder, Tokyo offers many options for all tastes.

Fans of manga and/or anime have their place in the festival of Ikebukuro, one of the most otaku neighborhoods. On the other hand, if we are talking about theme parks, the topic is widely covered. We have the Halloween festivals celebrated in the famous theme parks Sanrio Puroland and Tokyo Disneyland.

Those just looking for general entertainment will feel right at home too. There are events held in the modern Roppongi Hills complex or the neighboring city of Kawasaki. Those who prefer a more family-oriented approach can attend events in Harajuku, Ueno, or Futago Tamagawa Rise. It is always advisable to check on the Internet for the most up-to-date information in all these cases. Very often, the dates of each event may change every year.

There is much speculation about what will happen with Tokyo’s Halloween in the future. But it isn’t easy to close Pandora’s box. The ultimate paradox is that unknowingly, the Japanese transformed traditional Halloween into something closer in spirit to Carnival. A masked lawless hustle and bustle in the street. This is the way we understand Carnival in Southern Europe and Latin America. It’s an occasion to temporarily subvert all the norms established in society under the protection of masked anonymity.