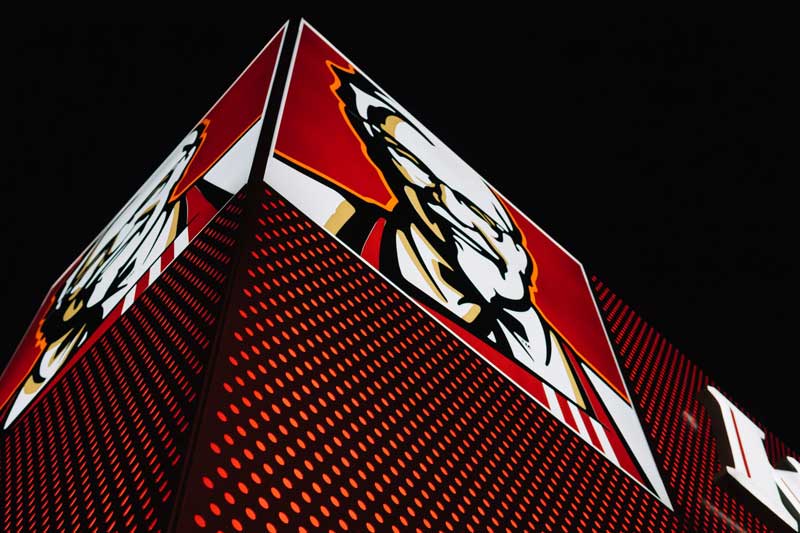 KFC: How the Fast-Food Brand Became a Christmas Tradition in Japan

Christmas is a ubiquitous, worldwide holiday officially celebrated in 160 countries across the globe. From Colombia to Romania, Malta to Ghana, each nation has its own variation on central Christmas practices. Even if someone didn’t grow up exchanging gifts, decorating a Christmas tree, or leaving out goodies for Santa Claus, such traditions are commonly known around the world. Not many countries, however, besides Japan, celebrates Christmas using KFC.

Take Belgium, where Sinterklaas visits on the 5th and 6th of December and his assistant, Black Peter, kidnaps naughty children in a bag, or Croatia, where St. Nicholas places gifts in children’s shoes, and people light yule logs on Christmas Eve.

Food, of course, plays a large role at Christmas, as is the case with many holidays. In the USA, many different main courses, from turkey, ham, lasagna and vegan meatloaf are served during the Christmas holidays.

One food, however, rarely shows its face at family-oriented Christmas meals: Kentucky Fried Chicken. There aren’t many Christmas traditions that involve taking a stroll to the local KFC to buy a bucket of wings with some mashed potatoes. That is unless you live in Japan. KFC is not only a common Christmas option but has been the preferred choice for Christmas meals for over 40 years.

How Did KFC Become a Christmas Tradition in Japan?

When uncovering the mystery of how KFC came to be Japan’s leading Christmas meal option, it’s necessary to look beyond the Colonel’s secret blend of 11 herbs and spices and travel back to the early 1970s.

Expats in Japan were a comparative rarity back then, as was food that catered to typically Western diets. KFC had arrived in Japan in Nagoya on November 21, 1970, as a subsidiary of the Mitsubishi Corporation. But it wasn’t until KFC landed in Tokyo in July the following year that its popularity started to take hold. Much like other elements of adopted Western culture, it was young Tokyoites who took an interest in the idea of cool American food, cool American store and cool decor. By 1974, KFC’s presence was well-established. Ironically, it wasn’t what expats themselves wanted, especially come holiday time.

This is when the story of KFC in Japan at Christmas takes a turn into folklore. As the tale goes, Takeshi Okawara, the first manager of KFC in Japan, overheard some foreigners in his store complaining about Japan’s lack of food for Christmas dinner. That night, it seemed that St. Nick himself gave Okawara a pre-Christmas visit because Okawara claims he had a vision of a KFC “party barrel” in his sleep.

Fast forward to 1984 and Okawara became CEO of KFC, a post he held until 2002. His Christmas dinner vision of substituting fowl for fowl – turkey for chicken – turned into a lucrative business that resulted in 3.6 million Japanese people eating KFC every Christmas.

What started as a single wine-and-chicken combo has evolved into a massive array of choices that people pre-order and line up for out into the streets. Commonly called “Kentucky” (ケンタッキー) in Japan, KFC has become part and parcel of the fabric of Christmas in Japan.

Wrap Up Christmas Nostalgia in a Meal Set

At present, even people who’ve never bought a single party barrel (yes, it’s still an item), or any kind of KFC Christmas meal whatsoever, still align KFC with the Christmas season. In the case of one young university student I spoke to, he believed that even if KFC’s success was nothing more than a mere marketing ploy, it didn’t change his sense of nostalgia. KFC, he says, has “some Western feeling to it,” which makes it feel more authentically Christmas, even though it’s not eaten as a standard holiday meal in the West. As a child growing up in the countryside, families still drove through the snow to the nearest KFC 40 kilometers away to pick up their fried chicken order.

Plus, people tend to be extremely busy in Japan, and don’t have time to cook an enormous, extravagant dinner. Christmas is not a national holiday, and there’s no guarantee that one would get that day off of work. This is exactly why Christmas KFC in Japan also works: it’s not really about the chicken, it’s about coming together as a family to enjoy the meal (while saving time in the process). Hence the barrel-sized orders in a country well-known for its generally reserved food portions.

How a KFC Jingle Came to Rival “Jingle Bells”

When talking to Japanese people about KFC at Christmas time – what imagery is evoked in their minds, what feelings – the first thing to come up time and again is the KFC Christmas song, simply titled “Nice Holiday.”

More of a jingle than a song, “Nice Holiday” holds sway over the hearts of the Japanese public in a way that “White Christmas” does for someone who grew up in the United States. As stated by numerous Japanese people I spoke to: “When I hear that song, I know it’s Christmas time.” For those in their 20s to their 50s, the song triggers an outpouring of emotion and childhood nostalgia that nearly brings people to tears.

A compilation of the commercials that feature the song can be found on YouTube. The commercials feature shots of smiling friends and family members cut atop a mosaic of western Christmas iconography, including Christmas trees, jingle bells, snowy bluster, people in sweaters and scarves – all topped off with handoffs of giant buckets of chicken to customers from KFC cashiers. In short, KFC is part of the DNA of Christmas in Japan because it was one of the main gateways to help usher these symbolic holiday elements into the country.

What Are the KFC Menu Options For Christmas?

After the song, is the seasonal transformation of the Colonel himself. Late in the year, Colonel Sanders will appear in a Christmas hat on posters at KFC locations, and his statue outside will be dressed in a Santa Claus costume. As soon as this happens, it’s time for people to start making Christmas plans and put in their orders.

Preparation for Christmas sales start in July, and customers can typically place orders at the beginning of November. About 40% of holiday customers take advantage of this option and place their orders to beat the rush (and get a discount in the process). From December 23rd to the 25th, KFC makes 1/3 of its annual sales in Japan.

Menu options are typically split into the aforementioned party barrels (パーティーバレル) and “Christmas packs” (クリスマスパック). Party barrels are either “original” or “variety,” referring to the type of chicken and come with a salad and a cake. Christmas packs are generally a cheaper option and consist only of chicken with no sides. The variety of chicken comes in an original flavor, chicken nuggets, chicken fingers, and barbecue chicken. Sides are available whether they be more chicken, cake, or salad. All in all, 300,000 party barrels and 800,000 Christmas packs make their way homes every year to the inevitably greasy fingers of families.

As the influx of pictures on Instagram attests, KFC at Christmas-time is no small affair. Every detail of the food, especially its presentation and appearance, is meant to be impeccable, even classy. This might be a startling contradiction for any non-Japanese people who think of KFC as greasy, cheap food, but in Japan, it’s just as normal as cookies and milk for Santa.

Japan has a habit of absorbing elements of various cultures and repurposing them to suit Japanese tastes. Such is the case for Christmas, and KFC is a uniquely important element of it.

It may be easy to dismiss the phenomenon of Christmas in Japan as corporate-driven, but let’s be honest: what holiday and tradition haven’t been commodified at this point? (Take what De Beers did with diamond engagement rings if you doubt this.) What matters, as always, is what people do with what they’re given, and how they choose to celebrate a special time with those they care about.

And in Japan, Christmas is simply not complete without KFC. Along with Christmas lights strung up along the streets, or signage at stores swapped out to sell Christmas goods, Colonel Sanders stands ready to help make some Christmas memories.