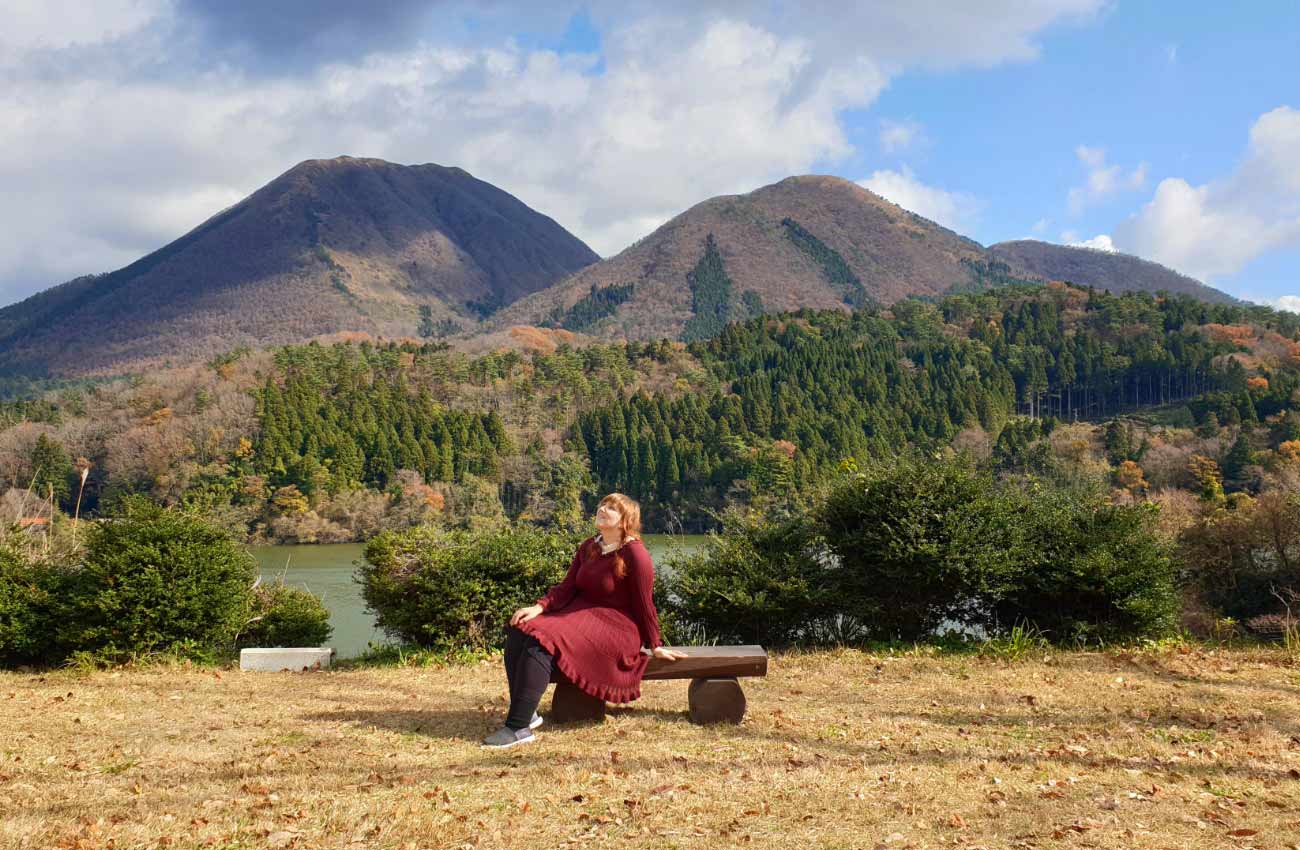 What to Do in Iwami: Discovering the Region in Depth

Shimane Prefecture is rarely on the radar for foreign travelers. When it does, it usually conjures up images of the famous Izumo Taisha Shrine and Matsue City with its castle, both located in the east of the prefecture. But this time, we will explore the western side: the Iwami region (石見国, Iwami-no kuni), which offers gems for off-the-beaten-track destinations in Japan.

What Are the Most Famous Sites of Iwami Region?

Talking about Iwami, close to the border of Yamaguchi Prefecture, you can find Tsuwano (津和野), a small town that is also called the “Little Kyoto of Sanin.” There, you can dive into history with a historical samurai district, walk through the thousand red tori gates of Taikodani Inari Shrine and enjoy the view from the castle ruins. Tsuwano offers its unique culture and allows you to get to know the real Japan without the crowds of tourists.

Another place of interest located more east is Iwami Ginzan (石見銀山), a former silver mine and World Heritage Site, where you can join a mine tour and see the traditional houses in the surrounding historic district. Nearby is the 1,000-year-old natural hot spring Yunotsu Onsen (温泉津温泉). Former mines, historic streets to explore, and onsen for the night — what more could you ask for?

You can take the spectacular coastal road to reach two famous spots of the Iwami region. Next, let me introduce some of the lesser-known stops to make along the way.

Mount Sanbe (三瓶山) is located in the center of Shimane Prefecture and belongs to the Daisen-Oki National Park. My adventure to explore the active volcano started with a 40-minutes bus ride from Odashi Station to Sanbesou (さんべ荘), a traditional Japanese inn with outdoor hot spring facilities. Here, I rented an electric bicycle to explore the area.

Around Mt. Sanbe, you can find many plains with grass, great for cycling and scenic views. Small towns and villages are scattered around the area with forest and green hills. My bicycle adventure led me around Kiyohara and Ikeda, where one can see rural Japan with old houses, narrow roads, and fields. I stopped at some of the small shrines and temples along the way, covered in yellow ginkgo leaves during the autumn season.

One of the temples I visited was Jozenji (浄善寺), known for its huge ginkgo tree. This is the second-largest ginkgo tree in Shimane prefecture at about 30 meters in height, estimated to be around 600 years old. The leaves of this tree turn golden yellow around the middle of November to early December, carpeting the temple grounds in a gorgeous yellow sea when the leaves fall to the ground in its later season. It felt like walking around a golden paradise, especially during its evening illumination event when the grounds are lit up after dark.

The last stop on my bicycle adventure was Lake Ukinunoike (浮布池) and the observation deck. The view on Mt. Sanbe and the lake is stunning, even attracting the likes of Emperor Hirohito and Empress Nagako in April 1971. There are some benches to relax by and enjoy the view and the surrounding nature. At the lake’s shore is a small shrine. The torii gate for this shrine is placed inside the lake, making it very photogenic.

My bicycle adventure took about three hours. There is more to explore around Mr. Sanbe, such as hiking trails, campgrounds, and other outdoor adventure spots. Unfortunately, I couldn’t take full advantage of this area’s highlights, though I’d recommend that you plan for an overnight stay to explore the region more thoroughly.

Sekishu Washi is an old traditional handcraft, looking back on over 1,300 years of history. It has been designated an Important Intangible Cultural Property and is still used for various products nowadays. Thus, it is an essential part of the costumes of Iwami Kagura, a sacred dance ritual famous in the Iwami region. At the Sekishu Washi Center (石州和紙会館) opened in 2008, visitors can learn about the history and the traditional techniques of producing this kind of Japanese paper through a video documentary, displays, and even a hands-on experience. Furthermore, inside the main hall, products are displayed to show the versatility of usage and include a product shop.

The raw materials for Sekishu washi are plants called kozo (楮), mitsumata (三椏) and wild gampi (雁皮). The paper-making process begins with branches being cut and steamed. Then the bark stripped off. The black bark gets softened in water, and then the outer layer is carefully scraped off with a knife. The remaining white bark is rinsed with clear water, boiled and steamed, and after this, beaten with an oak stick to loosen the individual fibers.

Together, with water and a sticky substance from the tororo aoi (トロロアオイ) root, a pulp solution is mixed to be used for the final washi paper production.

From here, visitors can try out making washi paper themself! The solution is prepared beforehand, and you get a mold with a mat. To create your washi paper, scoop the mixture on the mat and spread it evenly with a back and forward motion. Drain the water and repeat this process a few times until you get your desired paper thickness. The washi paper is then removed from the mat, and any remaining water is pressed out. Usually, the washi is left under weights on paper beds overnight and then brushed on drying boards to dry in the sun during the process. For the workshop, however, a faster and simple method is used so that you can take your hand-made washi paper home right away.

While admission to the Sekishu Washi Center is free, the washi-making experience costs 550 yen and requires prior reservation.

Other Highlights to See in Masuda City, Iwami

Another place with interesting spots to see in the Iwami region is Masuda City (益田市, Masuda-shi). Located in the coastal area of the Japan Sea, Masuda was the capital of the former Iwami province and even appears in the history books dating back 2,000 years ago. The powerful Masuda clan ruled this area, and some well-known poets are also from Masuda City. Here are some of the hidden gems of Masuda City.

Kushishiro Kahime Shrine (櫛代賀姫神社) is one of Japan’s cultural assets, established in 737. The deity Kushishiro kahime no Mikoto is the ancestral deity of the Kushishiro tribe that settled in this area. On the shrine grounds, you will find several buildings. While the building in front of the main hall has red tiles, the main hall has a copper roof. The current structure dates back to 1765, though some of the old lumber from the reconstruction in 1548 is still present. Some Shinto rituals, like needle picking (針拾神事), lion dance (獅子舞神事) and sumo (角力神事) take place throughout the year.

While there are numerous shrines and temples in Masuda City, two of them are especially attractive for their gardens.

Ikoji Temple (医光寺) was founded in 1363 as a family temple of the ruling Masuda clan. From 1469 to 1487, Sesshu Toyo was the head priest at this temple, a monk known as one of the greatest painters in Japanese history. He designed the temple garden, which includes a pond shaped like a crane with an island shaped like a turtle. The appearance of the garden changes with the seasons: in spring, a weeping cherry tree blooms. In May, azalea flowers color the garden. Summer is highlighted by fresh green foliage, while maple leaves turn red in autumn. In winter, white snow covers the garden grounds.

The other garden designed by the priest Sesshu is at Manpukuji Temple (萬福寺). This temple was built in the Heian period (794-1185) and relocated to its current location in 1374. This, too, was a family temple of the Masuda clan. Sesshu designed this stone garden in 1479 with a more minimalistic design compared to the Ikoji Temple Garden. The pond forms the Chinese character for heart (心, kokoro). Visitors can enjoy the view from the veranda and — with prior reservation — also have a cup of matcha there.

Last but not least, let’s take a look at the interesting architecture of the Shimane Arts Center Grand Toit (島根県芸術文化センター グラントワ). Grand Toit is French, meaning “large roof.” And yes, the whole complex can be considered as one enormous roof. Sekishu roof tiles are spread out across the roofs and walls and create a unique atmosphere and represent the traditions and culture of the Iwami region.The building combines a large and small hall and a museum with various exhibits. The courtyard is designed with a shallow pool.

How to Get to Iwami

You can access Iwami by train from the Shin-Yamaguchi shinkansen station, where you can also catch local trains. From Hiroshima, JR buses operate to Hamada taking about two hours, which are included in the Japan Rail Pass.

The JR San-in Line runs along the coastal line. Some of the main stations are Masuda, Hamada, Odashi and Tsuwano. After getting off the train, you can either use the local buses or rent a car to get to your location. Take note that public transport doesn’t run frequently in this rural area and check the timetables beforehand.

Alternatively, you can take a flight from Tokyo to Hagi-Iwami Airport, which takes about 80 minutes, and start your trip from there.

*Non-resident visitors can ride the express bus between Hiroshima and Hamada for a special offer of 500 yen (price as for March 2022).

The Iwami region in Shimane prefecture is still a hidden secret for foreign travelers, where you can explore the real Japan, see different sceneries, and dive into nature. So don’t miss adding some days in Iwami to the itinerary of your next trip around Japan.