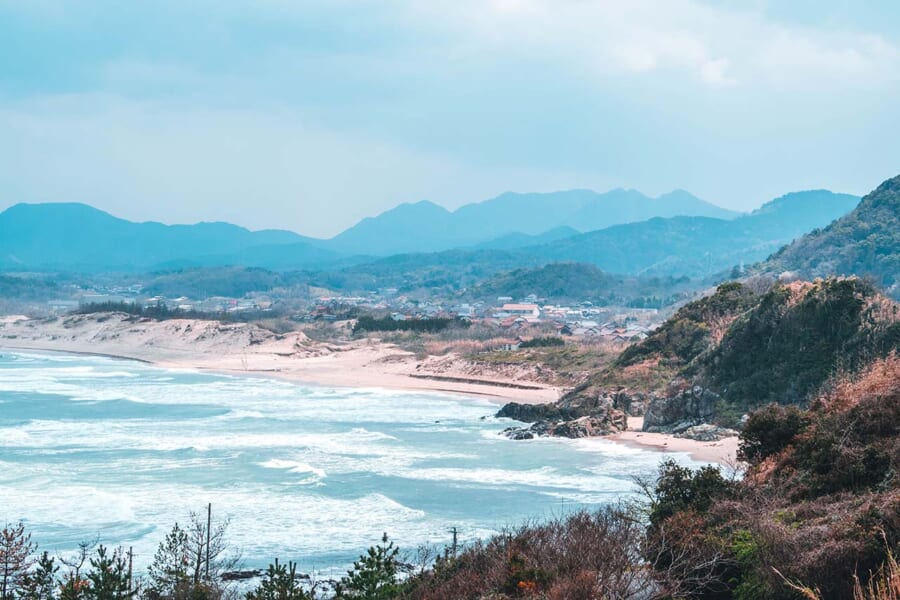 A Short Road Trip Along The Sea of Japan in Iwami

By Clémentine CintréApril 30, 2021No Comments

We came to Shimane Prefecture to explore the former Iwami Ginzan silver mine and the historic village of Tsuwano. However, since these two destinations are about 130 kilometres apart, the journey between them was a part of our experience in this region of Japan. We made several stops during our journey along the Sea of Japan to admire the landscape and take in the sea air. The journey along the coastal region of Iwami with its mountain landscape was the perfect contrast to the other parts of our trip.

Our first stop was in the village of Gotsu (江津市) overlooking Asari beach, to admire the Gotsuhigashi Wind Farm (江津東ウィンドファーム風力発電所) from above. Even though I appreciate the importance of developing renewable energy, visits to wind farms do not generally feature on my travel itinerary. But as soon as I saw the landscape of the Gotsuhigashi Wind Farm, I did not regret the decision to stop. The 11 gigantic wind turbines are installed along a clear sandy beach facing the powerful winds and violent waves of the Sea of Japan.

The powerful winds swept across Asari beach on this March day which made the beach appear both beautiful and inhospitable, but it would be a pleasant seaside area in the right season. Bathing areas are monitored and there is everything you need to enjoy the beach, which is a further reason to stop.

Stop at Yuuhi Park in Hamada

For a quick stop along the way, Yuuhi Park in Hamada (ゆうひパーク浜田) is an excellent option. This rest area on national highway 9 offers an impressive view of the Sea of Japan with dining options and opportunities to buy souvenirs. Even though we primarily stopped to get something to eat, the spot is particularly known for its sunsets.

Our next stop, Sanrigahama Beach in Masuda (三里ケ浜海岸) is similarly known for its impressive sunsets as well as for its marvellous array of water sports.

It’s not difficult to see why it’s popular for water sports when you find yourself faced with the powerful waves lapping the beach to the point where the beach itself almost disappears. A sea wall has been erected to prevent the fine sand from eroding the rocks, but you certainly feel surrounded by the wild ocean when exploring this area.

Surrounded by sea spray, the ferocity of the waves and the smell of the ocean, I felt surprisingly calm. Despite this, my travel companions told me that the highlight of our little road trip was yet to come, just a few kilometres away.

Ebisu Shrine in Masuda, the “Mont-Saint-Michel” in the Sea of ​​Japan

Having spent my childhood not too far from the original, I was cautious when I arrived at Ebisu Shrine in Masuda (衣毘須神社), regarded as the “Japanese Mont Saint-Michel” but I couldn’t ignore the similarities. After all, it was a small shrine perched on a rock that can be accessed during low tide. I could see the comparisons but the Japanese version was certainly smaller. However, I was not disappointed, quite the contrary.

We arrived at the perfect time as the shrine was accessible without getting wet and bathed in golden light against the blue background of the sky. After a prayer to thank the kami for the warm welcome, we began exploring the rock. It can be done in a matter of minutes, but that’s without taking time to fully appreciate the beauty of the landscape and the Sea of Japan. One coast is wild and battered by waves, whereas the other is a pleasant village of houses with orange roofs, the perfect contrast to the blueness of the sea and more akin to the landscapes of Okinawa.

There was just time for a walk on the beach before we had to get back on the road and continue our journey through Iwami towards Tsuwano, invigorated by the fresh sea air.

The journey between Iwami Ginzan and Tsuwano can also be made by train. Allow around 30 minutes by bus from the bus stop of Omori (大森バス停) to Odashi train station (大田市駅), then 1 hour 50 minutes between Odashi and Tsuwano (津和野駅) on the JR San-in line (journey covered by the Japan Rail Pass). All the sites mentioned in this article can be found along the JR line.

Even if you don’t want to stop along the way, you can admire the landscape from the train as the lines pass along the coast.

More Information on the Iwami Region

You will find more information on the Iwami Region website.

Discover the other stages of our journey in the following articles:

A small road trip along the coast of the Iwami region is the perfect way to take in the sea air and discover its coastline. Along the way, you will explore its different sides, and you might be surprised to discover many of its well-known spots, often nestled in the heart of the mountains.