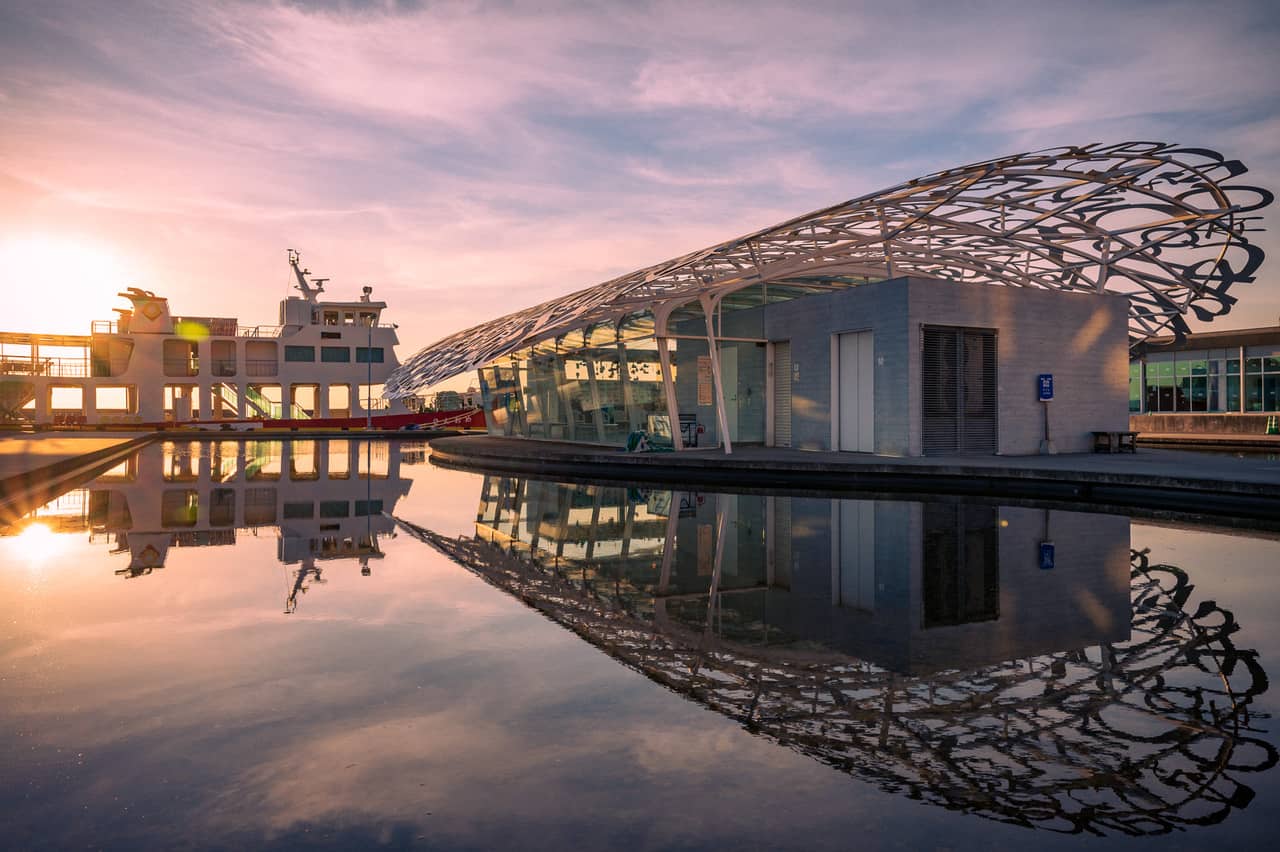 By Todd FongDecember 23, 2021No Comments

Over the immutably calm waters of the Seto Inland Sea, we approached the port of Ogijima on the Meon Ferry, one of the dozens of small ferries servicing the many islands of Japan’s most famous scenic waterscapes. The village houses appear stacked atop one another as if built with Lego bricks, surrounding the base of the small mountain that makes up the majority of the island.

Miyoko-san, the owner of Dorima no Ue (ドリマの上), where we would have dinner and spend the night, met us at the port. Apart from “Ogijima’s Soul,” an artwork by Jaume Plensa created for the Setouchi Triennale art festival, now used as a waiting area for the ferry and “Takotsuboru,” a children’s playground built in the shape of a local octopus trap, there is nothing to suggest Ogijima (男木島) is anything more than a fading fishing village. To discover the true soul of Ogijima, one must plunge into its narrow winding streets, uncovering both art and history with a sharp eye and mind.

Miyoko-san led us through the twisting paths of the village, pointing out the locations that feature art created for past Setouchi Triennale art festivals and giving us a history lesson about its past inhabitants. She pointed to the rock walls, sometimes three meters high, built by hand by villagers who collected large stones and carried them up the steep slopes. Some walls contained thousands of rocks, suggesting the original settlers’ incredible effort in establishing the village’s foundations. She showed us the walls of a fence, made with the recycled hull of a ship to show how wealthy the family was, not how poor. This highly-sophisticated fence structure showcases the high level of craftsmanship required to mold the 30-mm-thick, curved boat planks that only wealthy merchants could afford to commission during the Edo period. She led us to the top of the village, where the island’s friendly stray cats stand guard at the foot of the stone torii gate leading to the shrine where fishermen pray for safety.

Promoting a Sustainable Lifestyle at Dorima no Ue

With her knowledge of and passion for Ogijima, you would think Miyoko-san grew up here, but in fact, the island is her adopted home. After an 28 year career in teaching, she craved an opportunity to live a lifestyle with minimal impact on the earth, growing pesticide-free fruits and vegetables while creating as little waste as possible. Ogijima, where the lack of modern conveniences make living a simplified lifestyle more palatable, was a natural fit for Miyoko-san. So here she remains, hoping to educate her guests on the value and satisfaction of a low-impact island lifestyle.

As a tiny island not always so easily accessible from Takamatsu (高松), the largest city on Shikoku, sustainability has always been a way of life here. Garbage has to be exported, so waste is minimized. Water is drawn from deep wells, a highly physical task that Miyoko-san will gladly let you experience during your stay. When your muscles ache with the effort required to draw enough water to make a bath, you will value that relaxing soak even more.

While her life on the island is relatively simple, the dinner she prepares for her guests with the help of her friend Morishita-san is not. Almost every ingredient is a product of the island, mostly from her organic garden. Some fruits such as akebi grow wild on the island, and some are gifts from the sea like the whole fried mebaru fish, hijiki seaweed, and octopus. The only item appearing on the menu that is not locally sourced is the katsuo tataki, seared bonito from nearby Kochi Prefecture, served with a slice of garlic and fresh wasabi, which Miyoko-san includes with dinner simply because she loves it.

After dinner and a bath, there is nothing left to do but to drift off to slumber to the sounds of the distant sea, the chirping insects, and nothing more. As I slept early, I awoke early for a morning adventure, trekking through the village’s winding streets into the hills with my traveling companions Tetsuya and Julien to locate Miyoko-san’s farm.

As it turns out, the farm is well hidden down a narrow dirt path leading down from the main road obscured by overgrowth. A sign indicates a cafe exists at the end of the trail, constructed by hand by Miyoko-san and Morishita-san. Miyoko-san, who had risen at least an hour before us, already had our breakfast prepared by the time we arrived. Breakfast is simpler than dinner but still organic and delicious; a hot cup of coffee served in a mug made by Morishita-san accompanies it. From the cafe’s window, we looked over the Inland Sea and the bustle of ships moving cargo and people between big and small islands.

One last adventure before catching a boat off the island: a solo ride on Miyoko’s bicycle to the Ogijima Lighthouse on the island’s northern tip. The stone-constructed lighthouse is a rarity in Japan and one of the few attractions on the island outside the village and port. I was told it was an easy five-minute ride from the farm to the lighthouse by bicycle, but by the time I was nearly there, I made the horrible realization that it was five minutes almost entirely downhill. Returning to the farm took me nearly fifteen minutes back up the incline, where I arrived sweating and completely out of breath, but luckily still on schedule to catch our boat leaving Ogijima.

Miyoko-san accompanied us to the port, waving farewell as we pulled away from the island. She receded into the distance as if becoming part of the island itself, because, in many ways, Miyoko-san is Ogijima.

Teshima (豊島) lies only a few kilometers north of Ogijima, but it is worlds away in terms of the landscape. About ten times the size of Ogijima, Teshima’s natural resources support the island’s plentiful agriculture: rice paddies, orchards, and vegetable fields. Although originally an island of small fishing villages, Teshima became a tourist destination with the establishment of the Setouchi Trienniale Art Festival as one of the twelve islands hosting art exhibits.

We landed at Ieura Port on the northwest side of the island, where numerous bicycle rental shops outfit visitors with the best form of transportation to enjoy the island. Standard and electric-assist bicycles are available, but due to the island’s hilly terrain, I recommend an electric-assist bicycle to all but the fittest of travelers to make the most of your time on the island. The electric motor gives you a bit of extra zip climbing the hills so you can spend more time feeling the cool sea breeze on your face on your descents.

Enjoy the Island’s Peacefulness with a Private Rental House

Those who want to make the most of their time on Teshima might wish to spend the night. We had already spent the night on nearby Ogijima Island, but YUI-AKEDA is a private rental house suitable for a family or a small group traveling together. This beautiful house was renovated from a traditional-style Japanese house, replete with a small, simple Japanese garden. The bedroom has a western-style bed, and the kitchen is stocked with enough appliances and housewares to support homecooked meals. Another house run by the same company, YUI-ISHIYA, is also available. Staying on Teshima is another opportunity for visitors to enjoy the peacefulness of the islands and witness the unparalleled sunset over the Seto Inland Sea.

One of Teshima’s many highlights is the area surrounding the Teshima Art Museum known as Teshima Tanada, or the Teshima rice paddies. For decades, a small but dedicated group of volunteers has been reclaiming these rice paddies for agricultural use after many years of neglect. Many of the volunteers are men in their retirement years, motivated by the desire to see the beauty of traditional agrarian practices continue on the island. The fruit of their motivation is apparent in the golden fields of rice ready for harvest alongside small orchards of fruit trees, cotton shrubs, and vegetable gardens. People in the community are regularly invited to participate in annual events, including planting and harvesting, to keep them connected with the island’s history.

For now, the beauty of the landscape is safe, setting the perfect backdrop for one of the region’s most unique museums created by architect Ryue Nishizawa and artist Rei Naito. The Teshima Art Museum is less of a museum than a singular immersive experience connecting visitors with the natural landscape of Teshima. The museum consists of two dome-shaped structures cast in concrete. The smaller of the two hosts a small cafe, gift shop, and rest area, while the larger presents the exhibit “Matrix,” the substance of which must be seen with your own eyes, according to the museum’s curators.

At the time of this writing, there is no definitive news about the Setouchi Trienniale Art Festival event scheduled for 2022 due to uncertainty about the COVID-19 pandemic situation. As of October 2021, many existing exhibits have been reopened to the public. There is perhaps some muted optimism that the 2022 festival will proceed as planned with special precautions taken to prevent the spread of coronavirus. If you plan to attend the event, visit the official website of Art Setouchi for the most up-to-date information as it becomes known.

Getting To and Around Ogijima and Teshima

Travel between the islands of the Seto Inland Sea relies primarily on ferry service, and the tranquil nature of the sea means that ferries are generally reliable forms of transportation. Service to Ogijima is from Takamatsu Port, using the Meon Ferry. It takes about 40 minutes with a stop at Megijima on the way, and ferries run approximately every 2 hours between 8:00 am and 6:00 pm (timetables vary slightly by season, so check the website for the exact schedule). Round-trip fare is 1,020 yen for adults, 520 yen for children.

Visiting the islands of the Inland Sea in Shikoku was just one of the many things I did during my visit. Experiencing traditional arts and crafts, seeking adventure travel opportunities, and visiting some incredible natural and manmade landmarks of Kochi Prefecture left me hungry to return to Shikoku for a walk on Japan’s wild side. Shikoku remains a mysterious place to most visitors to Japan, but it doesn’t need to be. There is easy access by air, train, and car to its major cities, and with the help of smartphone navigation, you can get anywhere on the island you want to go. Take advantage of the fact that Shikoku is still relatively untraveled compared to the rest of Japan and experience what few have done before in Shikoku.

There are affordable flights from Haneda Airport to many major cities in Shikoku: Tokushima, Takamatsu (Kagawa), Matsuyama (Ehime), and Kochi. Using your JR Rail Pass, you can transfer from the Shinkansen at Okayama Station to one of several Shikoku-bound trains.