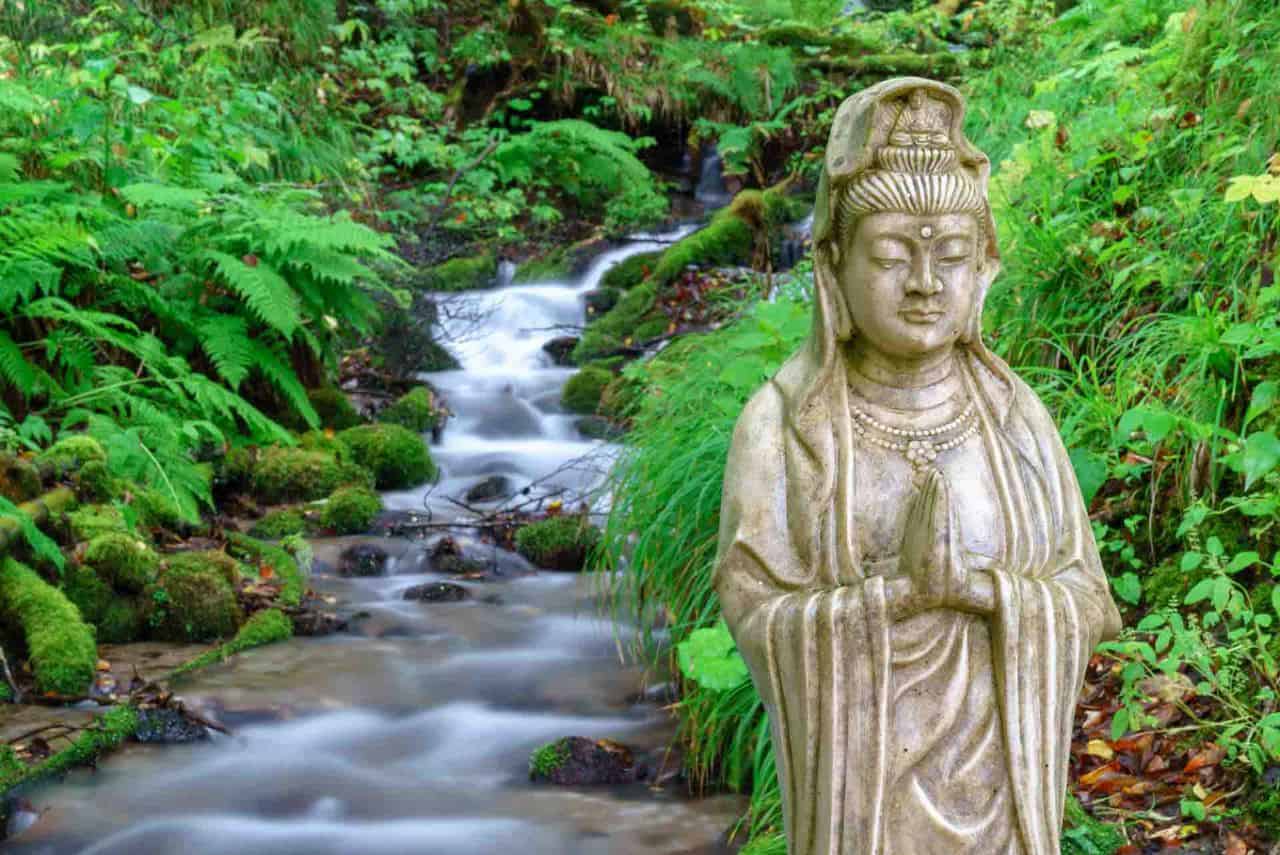 If you have seen the Studio Ghibli anime Princess Mononoke and were wondering where the inspiration for the natural environment of the opening scene — where Ashitaka is attacked by a demon — came from, the answer is Shirakami-Sanchi (白神山地). This vast expanse of mountains and forest across Aomori and Akita prefectures contains a diverse ecosystem of plants, trees, and wildlife that have existed fundamentally untouched by humankind for the last 8,000 years.

The heart of Shirakami-Sanchi is a lush beech forest, the largest in East Asia. Kazuo Oga, who worked as an animator on Princess Mononoke, went on a research trip to Shirakami-Sanchi in 1995 and wrote, “There are many photo books of beech forests, but I don’t know what the feet of the beech trees are and what the shape of the roots is. The grass and fallen leaves that cover the ground, and the differences between each beech tree. The bark, the composition of the trees, the sunlight through the trees… At the same time as seeing the scenery three-dimensionally, I see them with my eyes and feel the air, and I pick up a lot of remarkable elements.”

While wandering through the expanses of forest, it is easy to understand what he means. The feeling of being physically in the woods, surrounded by the smells, sounds, and sights, is only hinted at when looking at a photo and best explored by kayak or trekking. One thing that becomes quickly obvious is the scale of the region. It is huge. So it is worth being a little organized and planning out a two or three-day schedule to appreciate it truly. This is what we did.

Learn the Environmental History at the Shirakami-Sanchi Visitor Center

For a better understanding of the environmental significance of the Shirakami-Sanchi region, I’d suggest making the Shirakami-Sanchi Visitor Center your first visit. This visitor center in Nishimeya Village (西目屋村, Nishimeya-mura), to the north of Shirakami-Sanchi, is a dynamic, modern space that gives an easy-to-understand, hands-on introduction to this World Heritage Site. The center focuses on how the mountains were formed, why the expanse of beech trees grew here, and the wildlife who inhabit the forest. Many interactive exhibits will keep the kids entertained, and you will be able to memorize a few things to teach them as you snake your way through this magnificent region.

An interesting point the center makes — the reason the area is still a virgin beech forest with its diverse ecosystem still preserved to this day — is because the beech tree wasn’t considered valuable wood in Japan. It is too soft and contains too much moisture to be used for construction, and other types of trees were preferable as fuel for cooking. So, the kanji character for beech tree (橅) is a combination of “tree” (木) and “nothing” (無) — a tree that can be used for nothing.

Go on a Traditional Matagi Hunter and Gatherer Tour

One of the best hikes in Shirakami-Sanchi is trekking around with a Matagi. The term Matagi came into common usage around 500 years ago to describe the hunters and gatherers who lived in harmony with the forest. This tradition is still alive and it is possible to go on a tour with one who will introduce you to their lifestyle, skills, culture, and beliefs. You will feel at one with nature as you make your way up a secluded stream, collecting wild vegetation and mushrooms to add to your nabe hot pot for dinner.

A different way to experience one of Japan’s most beautiful natural landscapes is on a raft down the Iwaki River. The diversity of the landscape becomes instantly apparent as you float down the river with views of birds’ nests and cliff faces that you can’t see along walking paths or the road.

We chose to embark on the five-kilometer scenic route, which has short whitewater rapids spaced throughout. At points, we were encouraged to get out of the raft and float on our backs while staring up at the sky and cliff faces — a genuinely serene experience. Kidachi-san, who runs rafting tours through A’GROVE Canoe & Rafting, has been rafting since he was a teenager, so if you are after something a bit more white-knuckle, he can take you on the white water kayaking course further down the river. Also, if you prefer not to get wet, don’t worry, as they have dry suits which you can wear over your clothes to keep you warm and dry.

The Resort Shirakami is a series of scenic trains that skirt Shirakami-Sanchi along the Japan Sea coastline. The whole journey from Aomori to Akita takes around five and a half hours. However, we got off at Fukaura (深浦町) to go to the famous cobalt blue Aoike Pond the following day, effectively cutting our travel time to around two-and-a-half hours. The Buna is the most atmospheric train of the series, with modern, comfortable, spacious seating and a colorful beech tree aesthetic. I spent the second half of the trip sitting in one of the observation seats behind the driver, looking out at the sunlight spilling through the clouds over the ocean. Pretty fantastic.

There is also a car with booth seats for larger groups and a counter where you can buy snacks, drinks, and souvenirs. The train stops for a short amount of time at Senjojiki Station so that passengers can alight and walk along the exposed, undulating bedrock of the coastline, which was formed by an earthquake in 1792.

One of the most famous tourist spots of Shirakami-Sanchi is the cobalt blue Aoike Pond (青池). Still, like many Instagram-friendly attractions in Japan, the experience of getting there is equally as good, if not better, than the goal. Going on a tour is a great way to explore this area. During the Forest Therapy tour, your guide (we were with the fantastic Yonaiyama-san) will help you slow down and focus on elements that are easy to pass by without noticing. After breathing exercises and a relaxing stretch, Yonaiyama-san gave us a short overview of the area. Although it is called the Juniko Twelve Lakes, there are 33 bodies of water in total formed when a volcano erupted, interrupting the flow of a river and creating the ponds and lakes we see today.

The main difference between forest therapy and a regular tour is that instead of spending the whole walk listening to verbose explanations, forest therapy is about getting in contact with all around you while being enveloped in the natural sounds of the forest. I hadn’t really experienced anything like this before in a guided tour: walking while looking up at the canopy and seeing how the shapes of the leaves vary depending on the species of tree, stopping for a few minutes to shut my eyes and listen to the sounds of the forest, or focus on how the size of leaves relate to each other on a single branch. It was a new way of experiencing a forest, and Yonaiyama-san gave it added depth by peppering the walk with little details here and there to add context to the journey.

Yonaiyama-san is an experienced hiker, has been a forest therapy guide for three years, and has intimate knowledge of the forest and how it changes through the seasons. As a result, she was able to take us to places few know of, and give us insights not written in brochures or on signboards. We were able to observe the Aoike Pond from a different vantage point away from the rushed surroundings of the viewing platform, and she encouraged us to touch and feel the textural differences inherent to various types of moss and leaves. Through this, we were able to not only have a lovely forest walk, but also left feeling like we could comprehend at least a small portion of the incredible diversity that exists in this untouched forest microcosm.

The Nishimeya Village area of Shirakami-Sanchi is accessible via train and bus or by car. If you are traveling by shinkansen from Tokyo, transfer at Shin-Aomori Station to the local Ou Line train and get off at Hirosaki Station. You can then get a bus to Nishimeya Village, which will take around 50 minutes. If you are traveling by car, Nishimeya is a scenic one-and-a-half-hour drive from Aomori City or a thirty-minute drive from Hirosaki City.

The Fukaura area is accessible by train and by car. Take the Resort Shirakami or regular Gono line train from Hirosaki or Higashi-Noshiro Station. To get to Aoike Pond, take the Gono Line to Juniko Station and get the bus to Okujuniko Station. The buses basically run once per hour but be careful as the last bus back to the station can be as early as 4:40 pm depending on the time of year.

How to Book Shirakami-Sanchi Tours

All Shirakami-Sanchi tours for Matagi-guided treks, rafting, forest therapy can be booked through the Shirakami Calendar website (Japanese only).

Shirakami-Sanchi stretches across the Aomori and Akita regions of northwest Japan and contains the oldest pristine beech forest in East Asia — existing fundamentally untouched by humankind for the last 8,000 years. The area is vast, so taking advantage of different ways to experience it, be it by train, raft, trekking, or driving is ideal for exploring this diverse UNESCO World Heritage site.