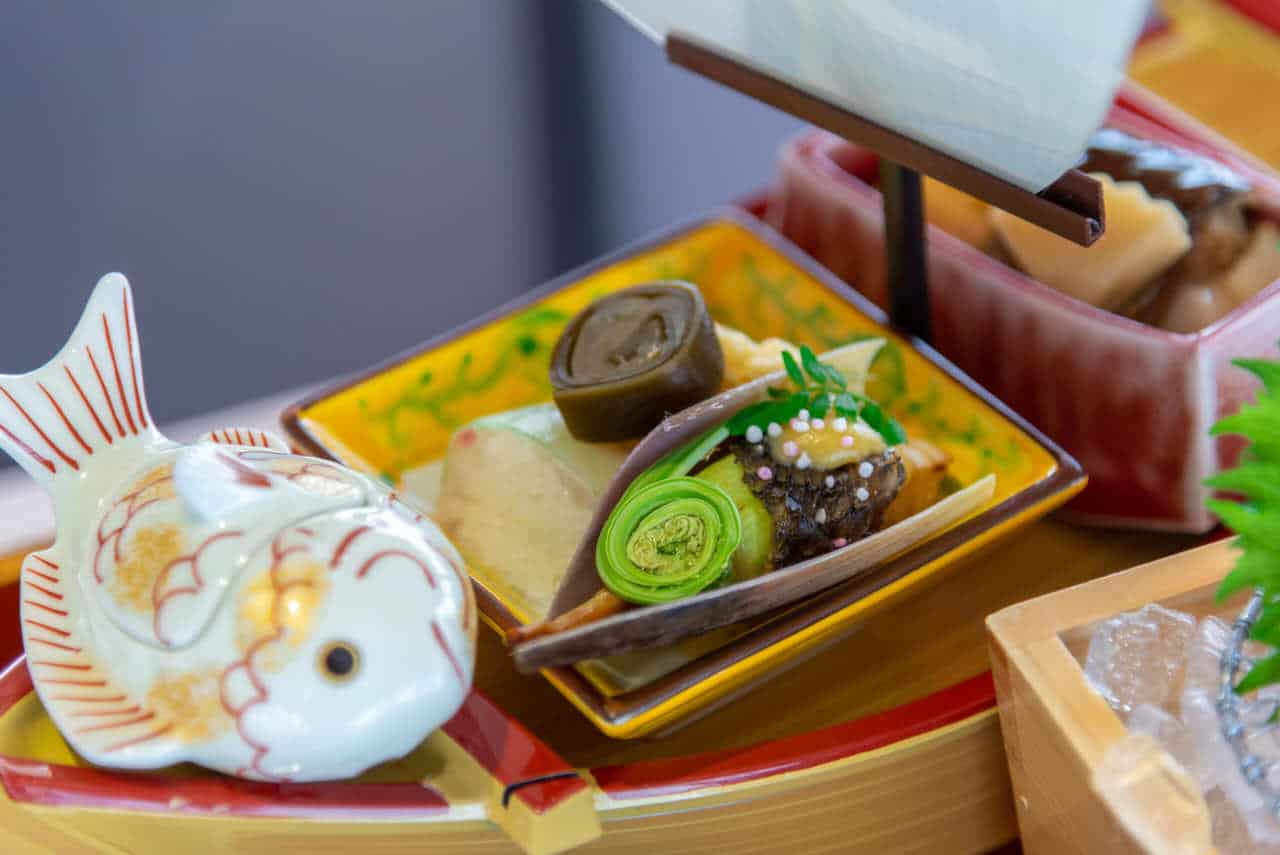 Tsuruoka: The Best of Japanese Cuisine in Japan’s UNESCO Creative City of Gastronomy

By Richard MilnerDecember 27, 2021No Comments

Tsuruoka City (鶴岡市) in Japan’s Tokohu region is truly a hidden gem of not only Japan but Japanese food culture. Yes, this once-critical port city on the way from Osaka to Hokkaido is known chiefly for its nearby Buddhist pilgrimage site, the three mountains of Dewa Sanzan. It’s also known for museums, Kamo Aquarium, seaside hot springs, its castle ruins, and lots of traditional folk art.

But impressively, Tsuruoka City is the first city in Japan to make it on UNESCO’s very exclusive Creative City of Gastronomy list. Time-honored dishes, new takes on classics, plenty of heirloom vegetables exclusive to the region, and the Buddhist monk-derived “shōjin ryōri” cuisine: Tsuruoka City really does have it all. And on top of all this, much of its cuisine, shōjin ryōri included, is extremely friendly to vegetarians and even vegans. This is a rarity in Japan, and shouldn’t be overlooked.

A Culinary History Steeped in Health, Creativity, and Survival

On Japan’s main island of Honshu, in the northeast where Tsuruoka City is located, snow is very common in colder seasons. Tsuroka City is also near the shoreline, and hundreds of years ago soaked up a lot of influence from the food trade that made its way up and down the coast. The region is also covered in mountains and forests and, in older times, would not have been easy to access. All of these factors together have created Tsuruoka City’s modern food culture.

In winter months when food was scarce, locals looked to the mountains and got creative. They had to develop ways to preserve their food, and also store it. And so, “hozonshoku” was born: traditional, ingenuitive methods of preserving foods. At present, there are over 70 such methods at use in Tsuruoka City. Thankfully, the region’s cold weather, a cause of hardship, also helped people survive, particularly the poor.

We can look to one food – sasamaki (笹巻き), a rice cake wrapped in bamboo leaves – to gain insight into why Tsuruoka City made it on UNESCO’s Creative City of Gastronomy list. The key to sasamaki, fascinatingly enough, is ash. Mochi – sticky, mashed rice – is wrapped in a bamboo leaf and soaked in a simple mixture of water and wood ash, perhaps even the ash of the bamboo tree itself. Then, using only water again, the bamboo-wrapped mochi is boiled.

The ash has an antibacterial effect, and the bamboo an antioxidant effect. This ensured that the food not only kept well for weeks at a time but provided nourishment to live. Modernly, sasamaki tends to be eaten like a dessert, and has black sugar syrup and kinako, ground soy powder, added to it.

The Yamabushi Monks of Dewa Sanzan and Heirloom Crops

It’s not possible to talk about the cuisine of Tsuruoka City without talking about the Yamabushi monks. The monks of Dewa Sanzan, the three sacred mountains near the city, have by all accounts lived in the region for nearly 1,500 years. They’re part of the ascetic religion Shugendo, started in the 7th century by a traveling mystic named En no Gyoja.

Without the Yamabushi monks and their knowledge of mountain crops, we wouldn’t have Tsuruoka’s current cuisine. Mountain-grown vegetables are known as “sansai” in Japan, which the monks have helped preserve. Hardy plains-based farmers grew their own vegetables away from mountains, and together with sansai have helped preserve Tsuruoka’s original plants and largely vegetarian identity.

At present, there are over 60 heirloom plants in the Tsuruoka region. They include local varieties of turnips, persimmons, soybeans, and more. Each of these is planted and harvested at different times of the year and rely on the continued dedication of local farmers. Altogether, they constitute what’s known as a “living cultural asset,” and are indispensable in an era of identical, store-bought foods.

The Yamabushi monks are also responsible for fathering the aforementioned shōjin ryōri cuisine. Once a part of their religious practice, now a highly refined dining experience, shōjin ryōri is known as a Japanese vegan cuisine. This makes Tsuruoka, and shōjin ryōri restaurants in general, an excellent stop for modern travelers with specific dietary needs.

Shōjin ryōri is often referred to as “vegetarian” or “vegan”. The original Buddhist shojin-ryori was indeed vegetarian, as a way to follow Buddha’s orders of non-violence towards animals. It also aimed to reflect the monks’ strict, simple lives: pared-down, all-natural, with high attention to detail and strict emphasis on quality. After Dewa Sanzan converted to Shintoism, those Buddhist principles transformed and the whole purpose of eating the Shojin-Ryori has adapted to the Shinto philosophy. It is now eaten as a way to absorb the energy of the mountain and to purify the practitioner’s body.

“Shōjin” is a term related to asceticism to achieve enlightenment. “Ryori” just means cooking. It took all the way from the 6th century when Buddhism was introduced into Japan, to the 13th century for the custom of eating Shōjin ryōri to spread. This happened as a result of the influence of Zen Buddhism. From that point on, the term “shōjin ryōri” started to take on its modern form as a type of cuisine.

There are many components that go into shōjin ryōri cooking. Sesame, walnut, and rapeseed oil are key. Seasonal fermented vegetables (pickles) are used to balance every meal, which connects people with the land, as is tea. When cooking shōjin ryōri, it’s important to eat every part of the vegetable, including the skin and leaf. Water, salt use, and oil use should be at a minimum. Food is often boiled with the lid on. Soy sauce and extra salt can be added to vegetables cooked in this way, along with roasted sesame seeds. All in all, this method of cooking and eating draws out food’s natural flavor, which is often masked in our modern, chemical-heavy world. It’s easy to see how such an approach to food appeals to health-conscious people such as vegetarians and vegans.

Nowadays, Tsuruoka City has preserved its cultural food heritage while also incorporating newer delicacies, cuisines, and methods of cooking from around Japan and the rest of the world. Regional chefs, quite aware of Tsuruoka’s reputation and history, are constantly working to innovate.

Fugu (pufferfish) master Suda Takeshi’s restaurant, Okimizuki,  for instance, uses a menu built from ingredients that would have been transported from the south by 17th-century merchant ships. Such ingredients include mōsō bamboo and conger eel from Kyoto, Japan’s former capital. The full menu is available on his website – prices are quite reasonable considering the work put into each dish.

Vegetarians (including those who eat fish) and vegans will find it easy going in Tsuruoka City, but that’s not to say meat-eaters are unwelcome. There’s plenty of pork to go around, particularly pork tonkatsu. Pigs were one of the region’s original domesticated animals. The flavor of the pork, it’s said, goes back to the same regional focus on high-quality food that’s used to feed the area’s pigs.

Other restaurant options in the area include Takitarō, Naa, Shunsai Sakura, and Shukubo Inns at Mt. Haguro. All typically serve seafood with their meals, at minimum, but vegans can request a fish-free meal. Reservations are recommended.

How to Get to Tsuruoka

From Tokyo Station, take the Toki shinkansen bullet train to Niigata Station, then transfer to the Inaho Limited Express to Tsuruoka Station (鶴岡駅, Tsuruoka-eki) (4 hours). From Akita Station, take the Inaho Limited Express to Tsuruoka Station (1 hour and 50 minutes). All of the city’s restaurant options are within walking distance from each other. To get to Shukubo Inns near Mt. Haguro, take the bus headed from Tsuruoka bus stop to Haguro Zuijinmon (羽黒随神門 ) (37 minutes).

A Unique and Refined Culinary Experience in Tsuruoka

For those heading to Tsuruoka, food can be a part of the experience, but it can also be the main experience itself. The region’s deep history is intertwined with its climate, the efforts of local farmers to preserve heirloom crops, its connection to Buddhism, and its entire identity. If you’re vegetarian or vegan, especially, the area has a lot to offer. Be sure to get the most of your visit by enjoying the full range of available food offerings.