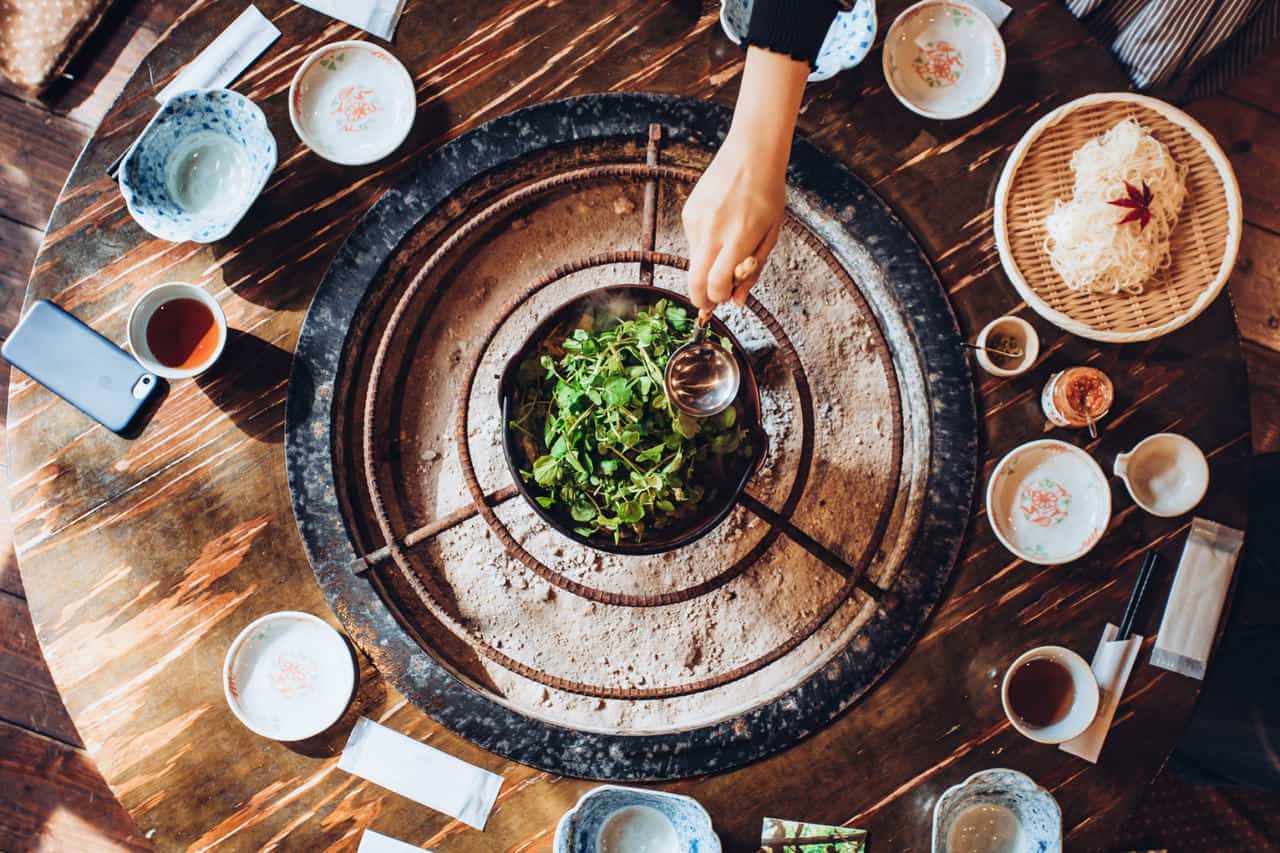 Cultural and Culinary Fusion in Nagasaki

At the height of the Fall season, I recently had the pleasure of visiting the beautiful southern port city of Nagasaki for two days of culinary and historical exploration.

Nagasaki served as the sole gateway between the Western world and Japan during two centuries of isolation beginning in the early 1600s and the fusion and harmonization between European cultures and traditional Japanese that resulted give this region a charm and aesthetic quite unlike anywhere else in this country.

My first stop during my trip was to visit a traditional Japanese restaurant located deep in the mountains outside of Nagasaki City called Yamanotera Yukyo. This restaurant had some incredible mountain views from its window-side tables that looked out into rich forests in full autumn colors.

Despite its ultra-traditional design and feel, this restaurant featured some surprising dishes that I had never seen in a restaurant like this. The hotpot that they served us over the central grill built into our table featured cresson, a French herb grown in their own gardens. Its light, fresh, and crisp texture paired wonderfully with the tsukune chicken and thin somen noodles that they produce by hand in this restaurant.

The owners here pride themselves in sourcing their ingredients as local as possible and just like the cresson, much of what is served at Yamanotera Yukyo is harvested directly outside the restaurant in the rich forests that surround it.

It is a bit of a journey to get here and you will either need a rental car or to take a taxi. However, it is a lovely mountain restaurant with some fantastic food that is well worth the excursion.

The Fall Colors of Nagasaki at Misojien Garden

For my next stop, I visited the beautiful gardens of Misojien to see the famous fall colors that can be seen here in November. Misojien Garden is a privately owned garden located in Unzen that is only open to the public from the middle of November to the start of December.

This garden has a breathtaking display of vivid fall colors and has many paths that wind through its expansive forests. This garden also has a special night display where the trees here are illuminated along its walking paths.

There are also a number of food and craft stalls during the Fall season where you can enjoy local foods and buy products from some of the local artisans in this region of Nagasaki Prefecture.

The Hidden Christians of Nagasaki

After my visit to the gardens, I traveled to Nagasaki City to see some of the historical sights dedicated to the struggles of the Christians in Japan who defied centuries of brutal persecution of Christianity during the Edo and Meiji Period and also the devastation of the nuclear bomb dropped on Nagasaki during WWII.

The first location I saw was the Urakami Cathedral located up on the hills overlooking Nagasaki. This beautiful cathedral was originally constructed in 1895 on the site of where Christians were once forced to trample on images of Christ and other key figures in Christianity to torture and catch people practicing Christians in secrecy. However, during WWII, this cathedral was gutted by a sea of flames from the atomic bomb attack in 1945.

The current cathedral was rebuilt in 1959 and now serves as the Cathedral of the Nagasaki Archidiocese. Charred remains of some of the stone saints and the toppled bell tower remain at this active cathedral and it stands as a testament to the resilience of the Christian community of Nagasaki.

In addition to Urakami Cathedral, there is also the Oura Catholic Church. This beautiful white church played a key role in challenging the Meiji Government and helped embolden the Christian communities of Nagasaki to come out of hiding and lobby for the legalization of Christianity with help from foreign delegations from the West. It also houses an extensive display detailing the struggles of the Hidden Christians in Japan during the Edo and Meiji Period.

The exhibits of this church included bounty signs promising huge payouts to anyone who could turn in practicing Christians and especially priests during the Edo Period. It also depicted “ebumi”, or the forced trampling of Christian images as a way to oust people with hidden faith.

The number of stories and history in this museum was incredible and I was shocked by this part of history that I had only read about briefly in history books back in my high school in America. Almost everything at this church is translated into English and I would encourage both Christians and non-Christians alike to visit here to learn about these incredible stories.

Note that photography is not allowed inside both the Urakami Cathedral and Oura Catholic Church as they are still active places of worship.

As the evening set it, I traveled into the heart of Nagasaki to dine at Kagetsu, one of this region’s most famous restaurants. This restaurant is what is known as a ryotei, a luxurious, traditional Japanese restaurant and entertainment house that serves its customers with the same distinction and practices that rich merchants and other VIPs enjoyed during the Edo Period.

My group and I were served by a waitress dressed in a lovely blue kimono who guided us into a large private dining room that overlooked the central garden of this large entertainment house. As our food began to be served, we heard the sounds of a geiko (geisha) entertainment group performing in the room across the garden before being dazzled by the many courses that came out one by one.

Our Shippoku cuisine included both traditional Japanese dishes along with fusion dishes like Wakaran. This soup dish, that was covered in a baked dough like a pie, combines Japanese, Chinese, and Dutch cooking techniques and actually requires a Western oven to cook.

The meal here was absolutely delicious and the traditional Edo-style atmosphere made it feel like we had slipped back in time by a couple of centuries to the Edo Period. There’s too much to share in this article, but please read my other article where I detail this amazing experience.

To end a long day exploring Nagasaki Prefecture, I checked into Nagasaki Garden Terrace, a luxurious and ultra-modern resort that overlooks the incredible Nagasaki skyline from its perch on Mt. Inasa.

Each spacious room here has its own terrace that looks out at the harbor or Nagasaki and the resort itself has an ultra-modern design with many amenities including an infinity pool and four high-class restaurants. For breakfast the next morning I ate at one of their restaurants right by the pool and had their western breakfast option of some excellent Eggs Benedict. Learn more about this wonderful hotel in my other article.

The 99 Islands of Nagasaki

After finishing breakfast, I drove up the coast to see the Kujukushima (99 Islands) of Nagasaki.

These islands are an incredible natural wonder with over a hundred small islands out in the bay of the Saikai National Park. There are multiple observation points around this massive bay to see the 208 islands here and each has its own unique view of these islands. The iconic scene that these islands form has been featured in many films, including “The Last Samurai.”

There are also cruise boats that you can take to see these islands up close at the Kujukushima Pearl Sea Resort. These islands are especially beautiful in the early morning and at sunset!

The observatory deck can be found here.

Nagasaki Ramen with a Unique Twist

To complete my trip through Nagasaki, I stopped by Ramen Toride Kenkyujo, a popular local ramen restaurant that specializes in ramen with a special seafood broth and handcrafted noodles. This restaurant also started a new trend for ramen called “dunk rice” where patrons can pour a bowl of flavored rice into their leftover ramen broth after finishing their noodles. This creates a risotto-like dish that is not only a delicious way to finish off your meal but also a whole new ramen eating experience to enjoy.

This practice would be taboo almost anywhere else, but here it is a practice that you are invited to try!