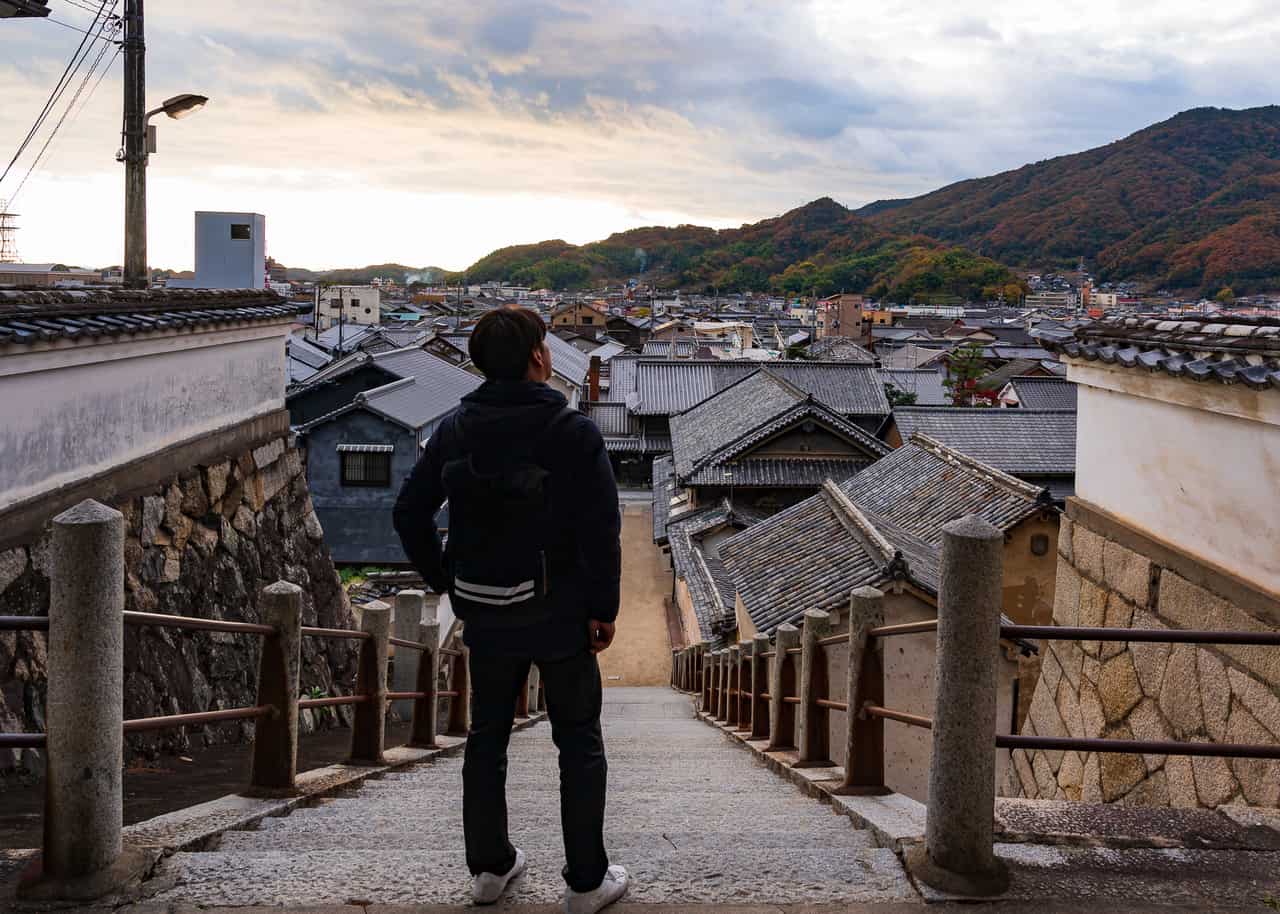 From Sake to Whisky: How A City near Hiroshima Birthed one of Japan’s Finest Spirits

The city of Takehara doesn’t appear to be extraordinary, but as if often the case in Japan, dig a little deeper, and you’ll find much more. We had just come from having taken the ferry to Okunoshima, better known as Japan’s Rabbit Island, and now stood in front of Takehara station. Takehara is a sleepy coastal town known more for its metal refining industry and its island full of bunny rabbits than for its glorious history. But Takehara was once the most important trading center on the Seto Inland Sea, then a principal city in the salt trade during the Edo Period, and later, unknowingly helping to birth the Japanese whisky industry.

Takehara became a prosperous port city from its strategic location on the Seto Inland Sea at the mouth of the Kamo River. At that time in the late Muromachi Period, there was still active trade between the West and Japan, as well as inter-Asia. During the Edo Period, the local tradesmen developed an innovative way to harvest salt from the sea, and Takehara became one of the most significant salt trading cities in Japan. As the salt business thrived, so did other industries, including sake brewing, a heritage that is still evident today in the many surviving breweries from the Edo era.

The Taketsuru family was a wealthy merchant family involved in both salt and sake, running a sake brewery from the mid-1700s. In 1918, Masataka Taketsuru went to Scotland to study organic chemistry, but he ended up working at a whisky distillery there. When he returned to Japan, he was the only Japanese national with knowledge of how to distill whisky. He was sought out by Kotobukiya, later known as Suntory, where he basically invented Suntory Yamazaki Whisky. Later, he left Kotobukiya to fulfill his dream of producing whisky on his own terms, moving to Hokkaido with his Scottish wife Rita, where the weather reminded him more of Scotland. There he founded Nikka Whisky, and the rest is delicious history.

You can visit the old Taketsuru Sake Brewery, now run by the 13th generation of the Taketsuru family, in the Takehara Historic District, an area of perfectly preserved Edo Period buildings that are being carefully maintained by the city and local residents. Down the street from the brewery, in front of the Takehara City Historical Folk Museum, a statue of Masataka and Rita stands proudly, memorializing this couple who were truly ahead of their time.

If you travel around Japan long enough, you will soon realize many places are referred to as “The Little Kyoto of insert name here.” In fact, Takehara’s Historic District is called “The Little Kyoto of Aki” for the region of western Hiroshima it is located in. I think it is a disservice to call it a “Little Kyoto,” as the place has a character quite distinct from Kyoto. If you’ve been to the mountain cities in Gifu like Hida or Takayama, or the left coast beauty, Kanazawa city, perhaps those places better represent the vibe of Takehara. The authenticity of Takehara was further confirmed when it was chosen as the location for a Japan Airlines commercial featuring the supergroup, Arashi.

It’s hard to remember that the Takehara Historic District isn’t just a tourist attraction. It is a real neighborhood where residents still live in houses from an era long past, where shops and restaurants operate in the same buildings they did almost three centuries ago. Tikuraku is a shop in a building dating back to the early 19th century, which used to be a kimono shop, a storehouse, and a merchant’s residence. Today it is a shop that sells many bamboo goods, local foods, and sake, as well as a place where you can rent a kimono and take a nostalgic stroll through time…er, town.

For example, you might walk up the flight of stairs leading to Saihou-ji temple, where there is a platform overlooking the city that resembles a miniature version of Kiyomizudera in Kyoto. The platform suffered structural damage during a typhoon a couple of years ago and has not been able to be repaired yet. You can admire the view from below, but you can no longer enjoy the view from the platform itself. No worries; the view from the hill on which the temple sits is also gorgeous.

At the end of the Historic District, where the road turns left, there is a unique sight. A small wooden shrine sits in the street, looking as if the town was built around it. When you view it from the side, however, you realize even the electrical pole was probably here first!

How Ryusei, the First Best Sake in Japan, Is Made

Seki-san, always the sake lover, excitedly led us through the open doorway of Fujii Shuzou Sake Brewery, which produces the Ryusei sake brand. Established in 1863, Ryusei won the very first National Competition of Sake held in 1907. Little has changed about their principles for making fine sake, fundamentally that nature, not man, is the primary creator of sake.

Inside the shop, the manager of Fujii Shuzou greeted us, and Seki-san made his request: would it be possible for us to see the process of sake brewing? The manager conferred with one of his brewers, who agreed to give us a tour of the facility. Because they had already begun the brewing process for this season’s batch, this was no small favor to grant a group of strangers who happened to wander in from the street.

There are only 3 ingredients used in sake at Fujii Shuzou: rice, yeast, and water. No other elements are required for sake, and they firmly believe in letting nature do all the work in creating the excellent flavor of their sake. They use a complete fermentation process, which takes longer and more steps to complete but creates a very smooth, easy-to-drink sake flavor.

At the final stage of fermentation, before the rice is filtered out of the liquid, we were offered a taste, scooped from the barrel by the brewer. It is heady and pleasant, obviously full of alcohol, but sweet and smooth at the same time.

The front of the brewery functions as an elegant shop selling glassware, utensils, and other useful artistic objects, local food products, and of course, sake. It resembles an art gallery more than a brewery warehouse, but then again, this is what Takehara is transforming into. What was once a living, breathing merchant town is being lifted up into a destination where visitors can enjoy fine sake, stroll historic streets in colorful kimono, and learn the history of a city that should never be forgotten.

How To Get to Takehara

It is so easy and convenient to get to Takehara from Hiroshima by bus, its a wonder so few people know about it. With the Visit Hiroshima Tourist Pass, Takehara is one of the destinations covered by the Middle or Wide area pass options. If you plan to stay in the Hiroshima area for at least 3 or 4 days, this pass is an incredible value.

The bus leaves from the centrally located Hiroshima Bus Terminal and takes about an hour and a half. During your ride, enjoy lovely views of the Seto Inland Sea, keep your mobile devices charged with provided outlets, or just nap in the comfortable reclining seats.