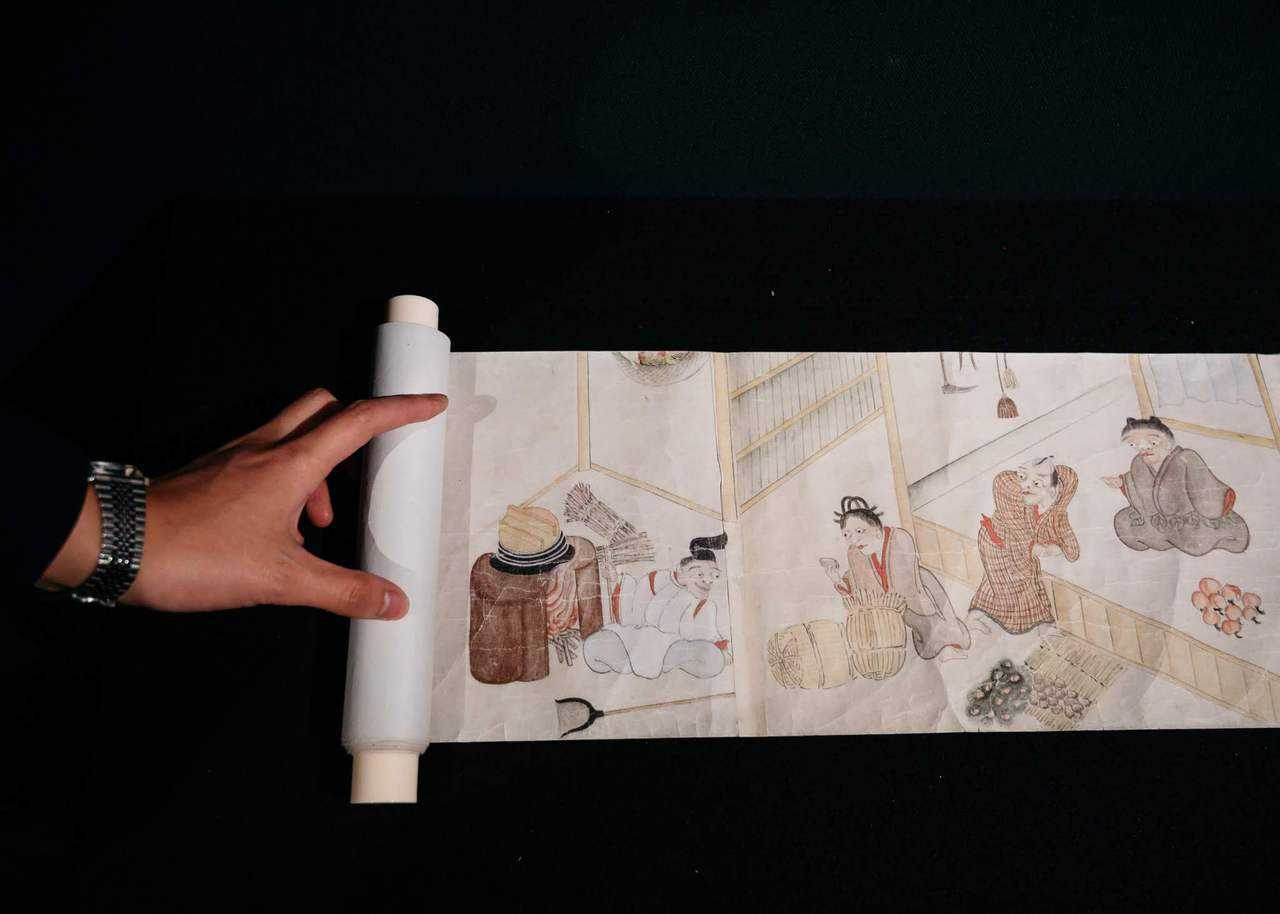 Miyoshi City – A Day Trip from Hiroshima by Bus

A 90 minute morning bus ride, as it turns out, is a great time to think about monsters. Well, not monsters, exactly. The Japanese call them yokai, but when you try to translate it to English, it becomes a bit messy, as Japanese-to-English translations sometimes are. For example, when someone calls out “Otsukare sama deshita!” as you leave work and you ask them what that means in English, the answer might simply be a very long silence.

My traveling companions and I met at the Hiroshima Bus Terminal at 7:30 am sharp. We were headed for Miyoshi city in the mountains north of Hiroshima, to visit their newest attraction, Japan’s first and only museum dedicated to yokai.

We’ve already established that yokai are like monsters, but that definition is too narrow. Yokai can be spirits, physical beasts, demons or gods, or even supernatural phenomena. Some yokai are widely regarded as real, while others as just folklore. The popularity of yokai exploded during the Edo Period, when illustrated stories, such as the famous “The Night Parade of 100 Demons” could be reproduced using woodblock printing in mass quantities. Interest in yokai faded during the Meiji Era, but was revived again in the 1960s by Mizuki Shigeru, a manga artist who drew on yokai tales he learned as a child to create the popular manga series, “Gegege no Kitaro.” As recently as 2013, yokai have continued to be popular among children in “Yokai Watch” video games and anime.

Mizuki Shigeru has his own museum in nearby Tottori Prefecture, but the yokai museum here in Miyoshi is quite different. Known as the Miyoshi Mononoke Museum (mononoke is another word for yokai), it consists of part of the collection of Yumoto Koichi, the former director of the Kawasaki City Museum, who is considered an authority of yokai history. About 5,000 items in Yumoto’s collection are available to the museum and are rotated into the exhibits throughout the year.

According to Yumoto, it was “man’s fear of nature and anxieties that gave birth to the yokai.” Before electricity, people lived in a world of pitch-black nights; even corners of their homes that were unused were shrouded in darkness. Imaginations ran wild, and they began to see common household items come to life, stray cats become fire-breathing monsters, the dead returning as vengeful spirits.

In fact, it is no coincidence that Miyoshi was chosen as the city for the Mononoke Museum to be built. In the 18th century, a strange incident occurred here, during which a young samurai named Ino was visited by yokai for 30 consecutive nights. The facts and embellishments of the story have long been blurred together, but it is a historical fact that the government banned tourists to Miyoshi for a period of time because of the sheer number of people who were showing up in this little town to find out what was happening. The centerpiece of the museum is the scroll that documents this local supernatural tale.

The museum itself is well thought out and interesting for people of all ages. Each section displays different ways people would recognize or imagine yokai in their lives. Images of yokai were carved into everyday items, woven into articles of clothing, or printed on game cards. There were even severed limbs of creatures purported to be yokai.

The interactive multimedia exhibits were designed by Teamlab, creators of the ultra-popular Borderless digital art exhibitions in Tokyo and Shanghai. In the entry of the Mononoke Museum, a multi-panel display shows hundreds of images of pieces in the museum’s collection; tap any one of them, and a window full of details pops up for you.

There is also an interactive room perfect for kids. Take a photo of yourself and see yourself transformed into a yokai and your photo uploaded (with your permission) to the museum’s Facebook page. Color your own yokai and the staff will scan it, where it will join a collage of other creations interacting on the wall in a giant moving mural.

To be honest, I wasn’t sure how engaging a museum about yokai could be to someone who knew so little about them, but after spending a couple of hours in the museum, I left wanting to know more. Thankfully, the gift shop has several books with English translations available to purchase, perfect for reading on the bus ride back to Hiroshima.

Walking distance from the Miyoshi Mononoke Museum is Ozekiyama Park, containing a small hill from which you can get a lovely view of the city. The view is all the better in Autumn and Spring, when the fall colors and cherry blossoms (respectively) are in abundance.

Two employees of the city had joined us at the museum and accompanied us to the park. They explained that at the peak of the season, which we had missed by just a week, the maple trees create a bright red tunnel leading up the path to the top of the hill. Nonetheless, the colors of the trees were still stunning.

At the top of the hill, there is a viewing platform. Unfortunately, the weather wasn’t so great by the time we reached the top, so I didn’t take any photos. But I climbed it anyway, just so I could say that I did. On a clear day, the views of the city and the surrounding mountains would undoubtedly be worth the climb.

After enjoying the colors of late autumn at the park it was time to head to Torretta Miyoshi, for lunch.

It’s hard to describe Torretta, as it is not just a simple restaurant. Rather, it is a food facility, where people come to buy and sell local produce and products made from them, participate in cooking workshops, or like us, eat at the buffet.

The buffet consists of many types of simple yet delicious dishes, all made from products of Miyoshi and the surrounding area. On the day we were there, we had a range of vegetarian dishes like steamed kabocha and mountain vegetables, fried chicken, and tempura. It is all-you-can-eat-and-drink for 60 minutes, and you’ll want to go back for seconds or thirds. Perhaps the only disappointment was only having two options for dessert, but by that time, I wasn’t going to fit much more in my stomach anyway so perhaps it was a blessing in disguise.

After lunch, we crossed the street to the Miyoshi Winery. It’s a popular stop for tourist buses, both as a bathroom break and for shopping. Besides wine, there are many souvenirs available here, both food and non-food products.

Miyoshi Winery has a regular line of wines and a higher-end line called Tomoe. The regular wines are all free to taste, and you can serve yourself. Wait… all free and self-service? Banish those evil thoughts, my good reader; this is Japan!

Tomoe has a separate refrigerated room for their wines and a small bar where you can have a taste a flight for a fee. Several Tomoe wines have won national awards, but I neither had the time nor the inclination to try them as I am not much of a wine connoisseur. We had one more stop on our agenda before heading back to Hiroshima, and fortunately, it was right across the street.

Okuda Genso Sayume Museum – The Museum of the Moon

As a photographer, the work of Okuda Genso was inspiring to me. He worked as a painter of fine art for decades, but it wasn’t until his mid-60’s that he created the works he is most renowned for, incredible landscapes composed with images of the moon. Standing before one of his massive paintings, I felt drawn into the scene, absorbed by the brilliance of its colors and detail. Pure magic.

The museum is also home to the collection of his wife, Sayume, an artist specializing in fine art dolls. There is a purity in her work portraying innocence and beauty, hope, and grace. Apparently, before marrying her husband, her work was mostly abstract and colorless; marriage to Genso brought color into her life and work. The same could be said of him, as over the years, his work became more and more vivid, perhaps following the trajectory of his love for his wife.

The museum itself is known as the museum of the moon, as it was the celestial object so prevalent in Okuda Genso’s famous paintings. It is a spacious modern concrete building designed for the enjoyment of the moon, reflected in a large still pond outside a huge floor-to-ceiling window. In fact, the museum is the only museum in Japan that remains open on the night of the full moon every month. From March to December, on days when there is a full moon, there are also special concerts held at 2:00 pm and 7:00 pm. March and September are said to be the perfect months for the moon-viewing nights as the full moon appears in the center of the window.

The lower floor houses a special exhibition room for visiting works of art. At the time I visited, the work of illustrator Anzai Mizumaru was on display. Mizumaru was one of author Haruki Murakami‘s best friends and illustrator of most of the covers of Murakami’s novels. When he passed away in 2014, Murakami was left heartbroken.

Mizumaru was an accomplished illustrator with his work frequently appearing in high profile advertising and in popular magazines. His work is deceptively simple, often using one or two colors, yet are instantly recognizable as iconic. Seeing a large collection of his work in one place made me realize how prevalent Mizumaru’s work is in art and advertising.

Note: I received special permission to take photographs in the permanent collection areas of the Okuda Genso Sayume Art Museum for this article. Normally, photography is not permitted in the galleries.

Visiting two fantastic museums, strolling under autumn leaves in the park and sampling local food and drink made a perfect day in Miyoshi in both content and time. The shadows of the day were growing long, and it was time to catch a bus back to Hiroshima. Using my Visit Hiroshima Tourist Pass as I did to get to here, I returned to Hiroshima fare-free. The standard fare would be about 3,000 yen, and my 3-day pass cost only 2,500 yen, so I was already ahead in terms of saving money.

Tomorrow, we would be traveling outside of Hiroshima Prefecture to Shimane, to visit one of Japan’s most famous and significant shrines, where it is said that all the Shinto gods in Japan hold their annual meeting.