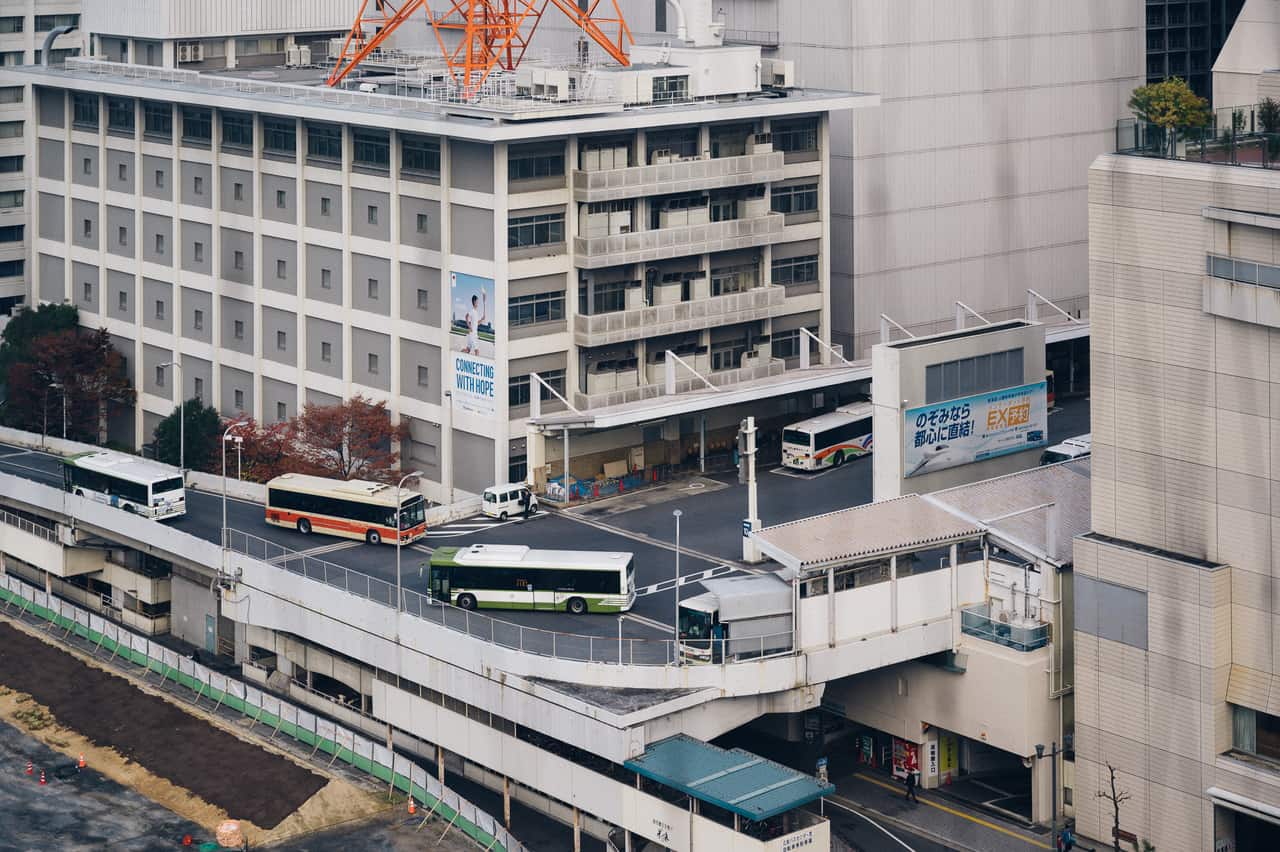 Congratulations! If you’ve chosen Hiroshima as one of your destinations on your trip to Japan, then you are aware of the many attractions in this fantastic city: the Peace Park and Museum, Hiroshima Castle, and Miyajima Island, to name a few. What you might not know is how many equally amazing attractions there are near Hiroshima city that are easily reached by bus. Not only that, you can access all of these destinations from one central location in Hiroshima city: the Hiroshima Bus Terminal.

What is the Hiroshima Bus Terminal?

The Hiroshima Bus Terminal is the single terminal used by buses in the city: local routes, inter-city routes, and even direct service between the city and Hiroshima Airport. Located in the heart of the downtown area, it provides convenient access to many hotels as well as shopping and restaurants. It is laid out in a loop with boarding areas numbered from 1 to 11 on one side and arrival areas on the opposite side. Easy-to-read signboards inside the center provide information on the destinations and times for all departures at each of the numbered bus stops.

Inside the center, there are windows to purchase bus tickets and discount passes as well as a small Tourist Information Center with English speaking staff and a rack of brochures. There is also the Bus Machi Food Hall, a collection of shops and food stalls where you can purchase food-related souvenirs or a bite to eat while you are waiting for your bus to depart.

Why You Should Travel by Bus vs. Train or Rental Car

Unlike many other regions of Japan, Hiroshima is better served by bus and streetcar than it is by train or subway. Train lines and stations are relatively few in Hiroshima City, and there is only a single subway line, the Astram Line. Fortunately, you can purchase discount passes that let you ride most buses and streetcars fare-free for 3 or 4 days. More on that later.

Long-distance bus travel in Japan is clean and comfortable. Seats are comparable to those on the Shinkansen and recline slightly. Large luggage is stored under the bus so you don’t need to deal with it at your feet. Overhead space is available for smaller bags. Many buses have AC or USB charging ports at each seat. Some coaches even have a bathroom, though rides more than 2 hours generally have a rest stop halfway to the destination.

Rental cars are an option in many parts of Japan where public transportation is inconvenient or non-existent. However, the bus services in Hiroshima cover a wide area of destinations that tourists enjoy, as well as inter-city bus lines. Again, some fantastic discounts are available to foreign passport holders that we will talk about in detail near the end of this article. Considering the cost of renting a car, parking, and fuel, using the bus can be an incredible deal for travelers looking to save money.

How To Get to the Hiroshima Bus Terminal

Unless you arrive by bus, finding the Hiroshima Bus Terminal can be a little tricky. Arriving by train at JR Hiroshima Station, you should take a streetcar (Route 1, 2 or 6; not Route 5) to the Kamiya-cho-higashi stop, eight stops from the train station.

When you get off the train, look around, and you will see Sogo Department Store, with the white external facade designed to look like fish scales. Believe it or not, the Bus Terminal is inside this building, on the third floor! On the east side of the building, you will find a pair of escalators that will take you directly up to the bus terminal level.

Secret Tip: Get Your Luggage Delivered to Your Hotel Directly from JR Hiroshima Station

If you arrive at JR Hiroshima Station before your hotel check-in time, there is an easy way to get a jump start on enjoying your day! There is a baggage storage and delivery counter in the station, which will help you get your bags delivered to most hotels in Hiroshima for just 500 yen each. Just drop off your bags between 9:00 am and 2:00 pm, and they will be at your hotel around 5:00 pm.

The counter itself is a little challenging to locate, so it is easiest to ask for directions from the Tourist Information Center out in front of the station near the streetcar station. You can pick up some brochures and ask any questions you have in English here, as well.

There is no hotel delivery service from the Hiroshima Bus Terminal, so if you want to have your bags delivered, be sure to take care of it before catching a streetcar to the terminal. You can store luggage in coin lockers or oversized luggage at the terminal’s Tourist Information Center, however.

Apart from the obvious uses, the bus terminal is also an excellent place to get a quick bite to eat before or after a long bus journey. The Bus Machi Food Hall is a collection of small restaurants that look a bit more upscale than your average bus terminal restaurant but are quite affordable. There is also a small souvenir shop, pharmacy, and convenience store. We sampled a few of the small items from the restaurants: oven-baked pizza, little fried fish with a squeeze of Setouchi lemon, and items off the grill, though you can also get local style Japanese foods and ramen here. In the morning, there is a small cafe with baked goods that opens at 7:30 am.

If you have more time, the AQ’A Shopping Center, which is connected directly to the bus terminal, has a 7th floor called Gourmet Town with a variety of restaurants. Many restaurants here have English menus, and all have the delightful Japanese plastic food models in the windows out front in case you need to point and order.

We ate at Genzou, which is an izakaya serving small dishes eaten while consuming alcoholic beverages. Fresh sashimi, various types of tempura, grilled meats and vegetables are popular choices, and the prices are low enough to keep the food coming for hours. The crowd at Genzou is decidedly local, but they have an English translation of their menu available as well.

Because Japanese department stores and shopping centers can be notoriously difficult to navigate, Hiroshima produces the Hiroshima Kamiyacho Area Gourmet Guide, which provides descriptions and maps for all of the restaurants in the area around the bus terminal. Pick it up free at the Tourist Information Center in the terminal.

One of the bus terminal employees let us in on a well-kept secret, so secret that it is kept even from upper management! All over the bus terminal, you might see the image of the terminal’s mascot, Shikanosuke, who is a cute little deer. Apparently, 60 Shikanoshikes are hidden around the terminal. Some are tiny, like this one hidden in a period on one of the signs! If you have some time to kill and are looking for a challenge, see how many hidden Shikanoshikes you can find.

The Ultimate Tip: How To Save Money Travelling By Bus

Now that we understand how the Hiroshima Bus Terminal makes traveling by bus easy and convenient, let’s learn about the most compelling reason to travel by bus: saving money!

If you plan to spend any time around Chugoku region(Facebook page) visiting the surrounding area, the Visit Hiroshima Tourist Pass is your best choice to save money. The pass is available for 3 or 4 days for travel within three different sized radiuses of destinations. The 4-day passes also include Hiroshima Airport as a destination.

This pass will enable you to ride on all streetcars and most buses for free for the duration of the pass. It also includes the ferry service to Miyajima Island. Depending on whether you purchase the Small, Middle, or Wide pass, you can travel to many tourist destinations within Hiroshima Prefecture.

For example, let’s say you have three days to spend in Hiroshima and would like to visit Okunoshima “Rabbit” Island, the gorgeous seaside temple town of Onomichi, and the historic five-arched Kintaikyo Bridge. Round trip bus fares to these three attractions total 8,500 yen, but the cost of the 3-day Wide pass is only 3,500 yen, saving you 5,000 yen! If you also use the streetcars to get around the city, the savings continue to add up.

Finally, the pass gives you discounts on food, shopping, and admission to attractions which you receive by showing your pass at participating locations! For example, instead of paying 1,800 yen for a round-trip Miyajima Ropeway ticket, you will only pay 1,350 yen with your pass.

If you have even more time to spend in the region and would like to explore nearby prefectures, there are two other discounts worth mentioning. The Hiroshima-Matsue highway bus connects you to Matsue, a city known for one of Japan’s most beautiful original castles and nearby Izumo Taisha Grand Shrine. This ticket is one of the best deals in Japan as the regular price of a one-way bus ticket is 4,000 yen, but foreign passport holders can purchase it for just 500 yen!

The Hiroshima-Yonago highway bus takes you to Tottori Prefecture and the city nearest picturesque Mt. Daisen and its beautiful temple, the coastal hot springs resort Kaike Onsen, and the port city of Sakaiminato, hometown of the famous illustrator Mizuki Shigeru and now the site of a street lined with sculptures and a museum dedicated to him and his iconic work. This ticket is also steeply discounted for foreign passport holders at just 2,000 yen each way.

All of these discounted passes are available at the Hiroshima Bus Terminal, so get them all while you are here!

Let’s Take A Little Trip Together!

All of this information is nice, but I’ll admit it can sound pretty academic. You probably don’t just want to hear about the great travel deals available using the Hiroshima Bus Terminal; you want to know what it’s actually like to travel using these deals.

I spent six days in Hiroshima, Matsue and Yonago, using the bus services I have described in this article and enjoying the unique foods and attractions this part of Japan has to offer. I hope you will follow along with me in my articles describing my trip.