In Yasujirō Ozu’s Tokyo Story, Onomichi is featured as an example of homely Japanese family life. Onomichi is a very small town in Hiroshima prefecture and is mostly a residential area. Many would declare this place as “true Japan”, and by that I mean that it shows such a natural life. It is at one with nature, the houses are very squished together, and it is sat happily in the shadow of a mountain. 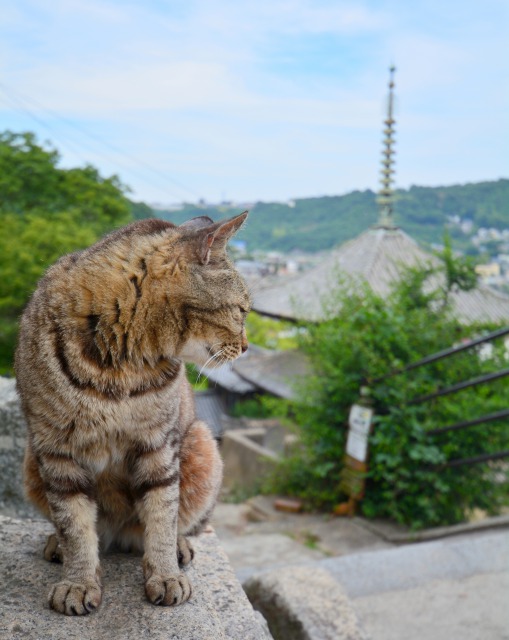 Senkō-ji can be found atop Mt Senkō-ji, via the Senkō-ji rope-way. While it is not a paragon of unique naming, this is an essential stop for those who wish to see more of Japan. Driving through south-east Hiroshima prefecture my friend said to me, “We need to see Onomichi.” “Good,” I replied, “I heard it mentioned in relation to a Buddhist pilgrimage.” Senkō-ji is one of thirty-three locations on the pilgrimage, said to be important to the Bodhisattva “Kanon” (aka Guanyin, or the Goddess of Mercy) and while I do not know a lot about Buddhism, I was highly enthused to see such a place.

Driving through the quaint towns was really nice, seeing a glimpseinto the real life of Japanese people. It felt very close to the kitchen-sink drama of Tokyo Story, and was very humbling. After we arrived and parked in town, I got a sense of Japan being a country that is tight for land. People are essentially living on top of each other, but no one seems sad about this. There is a continuously strong sense of community through Japan, which is something I cannot help but feel is lacking in the West.

As we drew further away from the town, it became to slowly look like a model village of typical Japanese suburbia. If you have ever seen a Studio Ghibli film – Whisper of the Heart for example – you might have an idea of how Japan looks, and Onomichi reflects that perfectly. We arrived at the top, and were greeted by statues of cats, which my friend was not able to explain to me. Japan continues to have a mysterious charm of oddities. Upon the summit there is a great choice of things to see: the temple, the view tower, and the garden. It was a very romantic setting, and not much seems to have changed since Ozu’s 1953 masterpiece. I really cannot express the tranquillity of being in Onomichi and taking the time to just breathe, wait, and watch.

I am very sad to say that my time with Onomichi was so tenderly brief, but it has remained with me, symbolic of what “true Japan” looks and feels like emotionally. If you’re travelling to Hiroshima, I urge you, do not let Japan rush by as a blur in the window of the Shinkansen. Stop, observe this quaint town, and breathe it in. The tranquil peace of Japanese life will envelope you, and at the very least it is a must-see for the link to Tokyo Story, a movie considered one of the best!