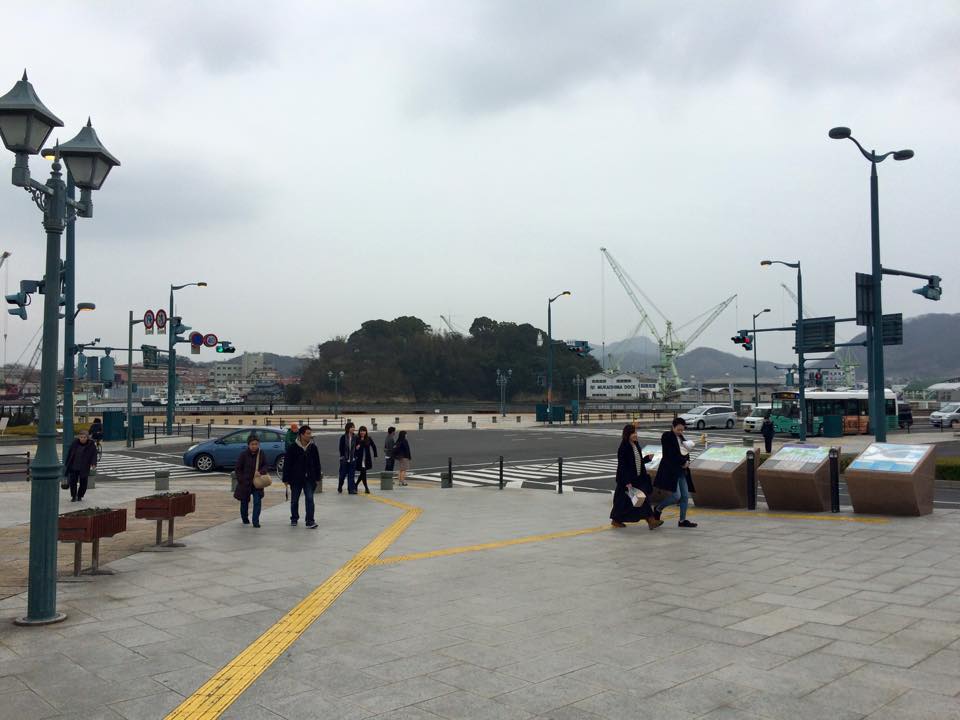 Island hopping with the Shimanami Kaido, Onomichi and Mukaishima

At Onomichi, I stepped off the train and into a small square.  Cars passed by, as necessarily busy as they could look in the sea-centric town. A small mall rose a few stories.  However, from the plaza, the most prominent view was of the inlet and Mukaishima island, opposite Onomichi. Here begins the Shimanami Kaido bicycle route ending on Shikoku island. The air was inescapably nautical in mood, as cranes towered over water on land flush to the water.  Boats traced the inlet, like hats on creeping sea giants wandering just submerged around harbor shallows. 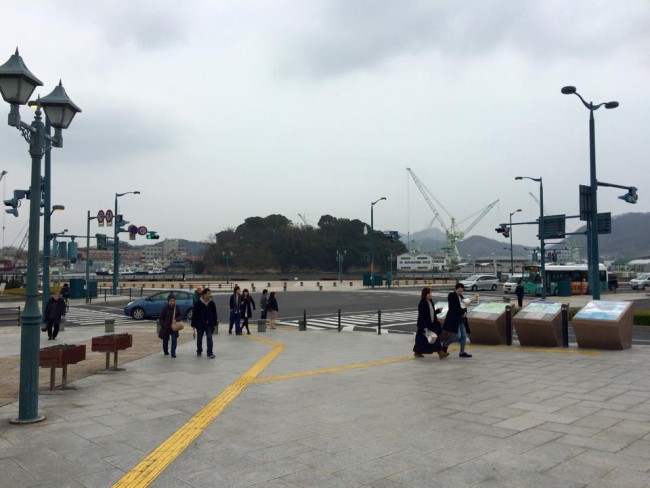 Bicycle rental as an unspoken focus, we curled right, centered as sea-gulls on a meal. The road continued out of sight past the mall, tracing the small bay.

Across the road and parted from the water by a metal slice of boardwalk was an open two-story car park and small strip mall. We wandered first to the mall, not surprised to only notice cars at the car park. The mall, unsurprisingly only had cross bikes at high rental fees.  We followed the boardwalk.  No spokes could be spoke of until a chance peek into the car park revealed a line of darkly-colored bicycles.  This was Ekimae-Kowan Car Park rental bicycle of Onomichi port. 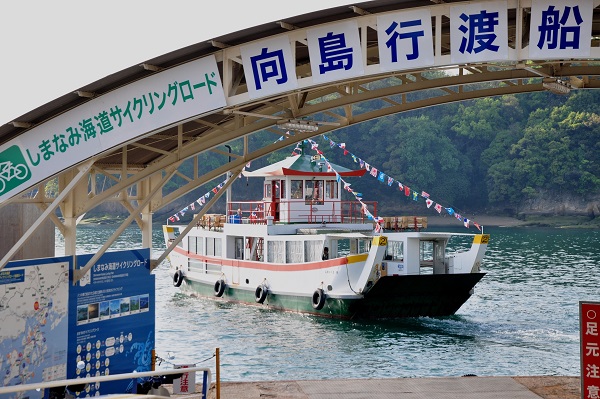 The bicycle rental was a 1000 Yen deposit plus an nonrefundable 1000 Yen. The honest-faced oji-san (term of endearment for elder men) keeping the bikes promised a return if we ourselves returned.  The Shimanami Kaido had another bike past a day’s worth of bridge where we could return these bikes, though without collecting our 1000 Yen deposit.  Signing and addressing a rental document, we chose of the selection.

The bike felt strong in my hands, and light enough that I wanted to swivel it overhead like a helicopter. The price was less than the bicycle I had rented on Naoshima, yet in all ways superior. Leaving the car park up a ramp and onto the boardwalk, we hopped on to roll out.  Here we pedaled our first Shimanami Kaido rotation, fluid as the water swimming by just in front of us.

Boarding the Ferry to Mukaishima

The fluidity of the bicycle movement ferried us fairly better than the small rocking ferry soon facing us.  Though there isn’t a conveniently crossed bridge from Onomichi to Mukaishima, ferries make a crossing between the two sides every few minutes.  Boarding alongside us were an athletic older couple with complete biking gear and a student or two, likely returning to class.  When we boarded, we pursed open for coins and handed them in for tickets.  The ferry shortly rocked back into its sea-sway.

It was three to five minutes before we entered the Shimanami Kaido first island – Mukaishima’s – concrete cove. There appeared to be houses of industry squatting down to the water on either side of the docking area.  Our ferry peaked upwards, low to the water like a turtle paddling to a nice rock.

The grey sheet-metal of the welcoming area was a slightly grim sight.  The murk of the water-wearied stained the town, Onomichi was a sweet setting, though this place rounded the impression with roughness. I knew it was simply the industrial side of a wind-weathered seaside town. Out of the docking area and my compulsive worry of imagining myself slipping under the waves, we met the road.

Touring the Island By Bike

Speed was the first objective.  Wind sweeping back loose strands of hair, we pedaled with speed to match the updraft of wind.  The first town center was split by a wide avenue, and we were soon pedaling bicycle to the right and onwards.

After the first fifteen minutes of the gentle decline, we met a telling bend in the road.  A drastic turn after an island’s calm drive meant an opening, and became the first sea-saw split. Across a watery wedge lied the next green isle – Iwashi island. I wondered at the sandless interstices between the land and water, and what depths whispering waves kept silent. 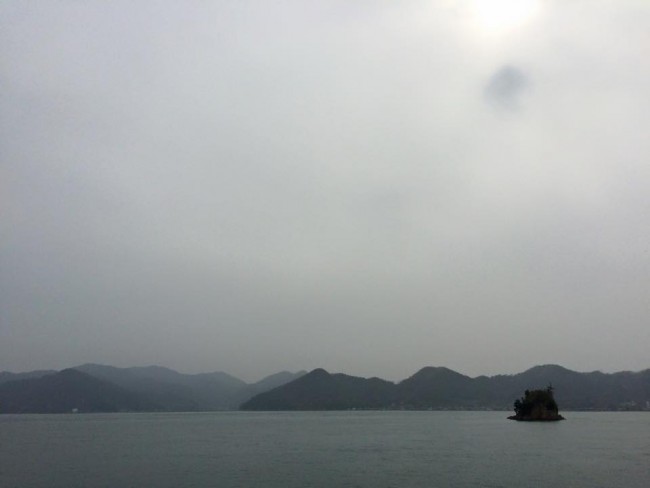 From the dark water protruded a tuft of rocky green, like nodules on a toad’s head.  Though there were no sand bars, the metal beams of a massive suspension bridge rose in the distance.  Innoshima bridge.  It was a simple geometric feature; a man-monolith that seemed heaved out of the murk of sea monstrosities to rest in beautifully scoured skeletal composition amidst the islands.  The ocean gateway was calling us on.  We sped down the coastal road with wind singing and water murmuring in our ears. 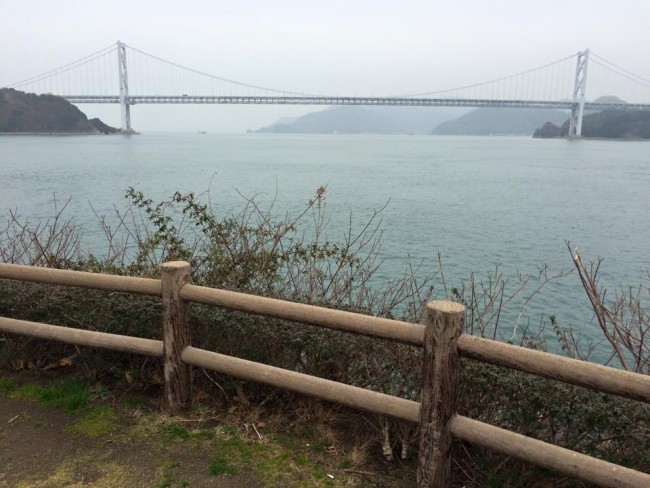 Knuckling out close to the water was a rest space with a magnificent view to the well-placed bridge. Grey met blue met green: a sublime view to be seen.

Our tour finally led us to town on the southern face of the island.  We wheeled in after passing under the structural superimposition of the bridge, looking only for a bicycle passageway over the water.  Shouldering out to the bridge was a wooded knoll, and we rounded around below a key intersection between the island circuit and a town road.  We then wound upwards to the guardrail and grate-floored walkway.

Dismounting our bikes and walking the walkway, we could peep a perilous drop to the low road.  Cars buzzed and whirred over the bridge, strung high up ahead and soon over our heads.  They were rhythmic flashes of reality crossing Innoshima bridge’s median line of a panorama in a world at sea. 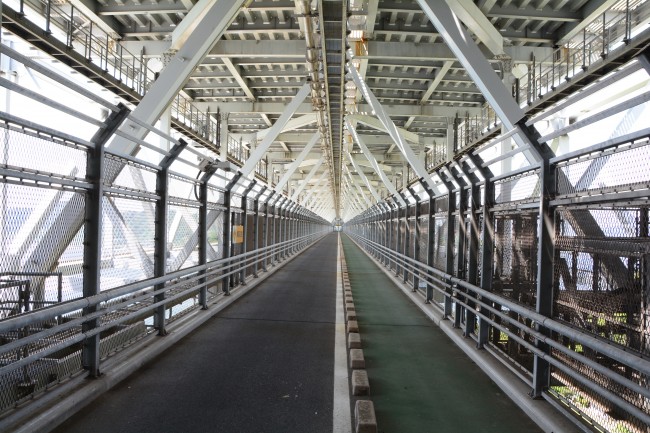 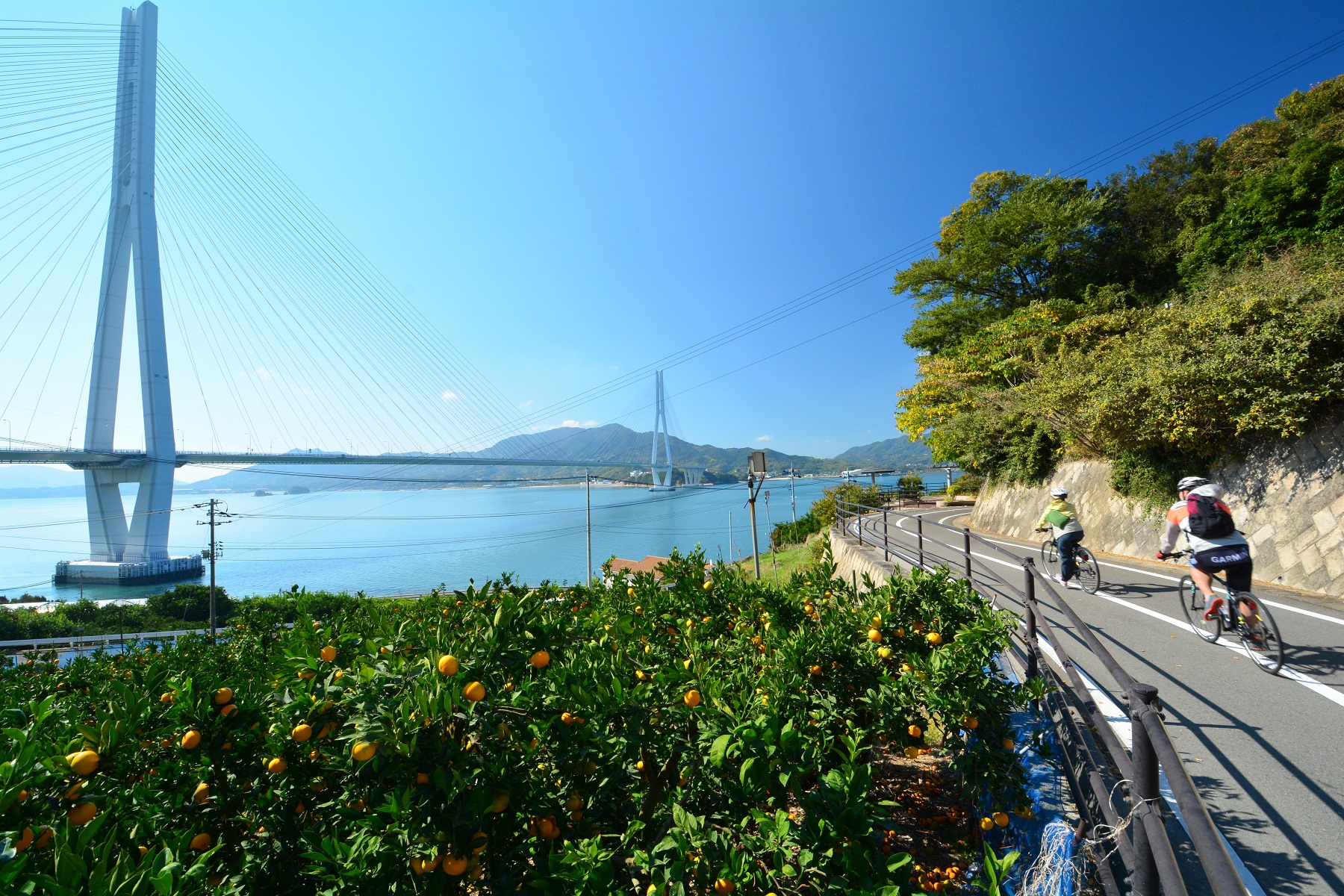 The passageway was girded snug to the underside of the highway.  It was open to the air on both sides, and there were fat margins between the stretching bicycle way and the drop to open waters.  My bicycle thrummed a continual rhythm as hypnosis hitched a ride.  A group of engineers or construction workers marched dutifully on inspection to the audial drone.  The procession made this crossing feel a little religious, as I attuned myself to the currents in space, air and sea.

Shinkansen from Shin-Osaka to Fukuyama, JR Sanyo line for Mihara, get off at Onomichi. 105 minutes and 8500 Yen.

Shinkansen from Hiroshima to Mihara, JR Sanyo line for Fukuyama, get off at Onomichi. 64 minutes and 3740 Yen.