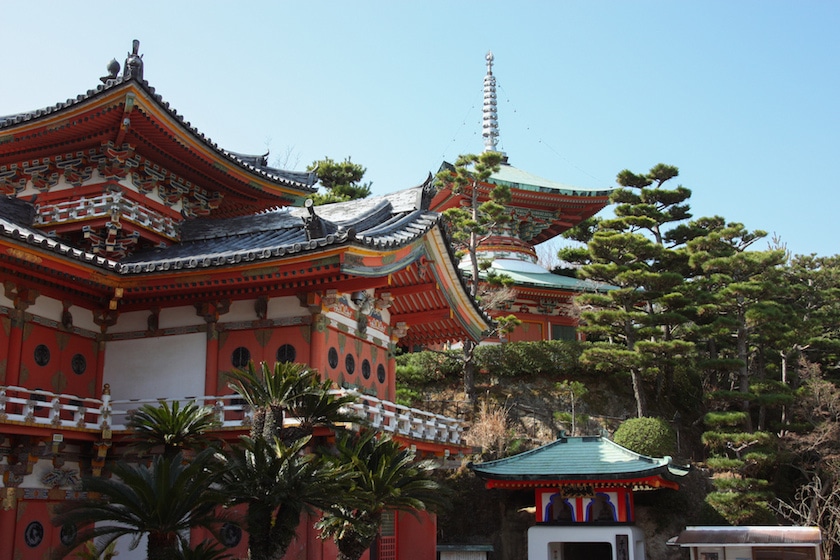 A Visit to Kosanji: A One-of-a-Kind Temple in Setouchi

Spiritual, contemplative places are abundant in Japan. With tiny sanctuaries just around the corner and gorgeous UNESCO world heritage sites waiting to be explored, there are several you can come across while travelling in Japan. Suppose you’re planning a trip to the Setouchi Region (瀬戸内地方) and interested in visiting one of these famous landmarks. If that’s the case, there is a place of worship I’d suggest you add to your itinerary: the Kosanji Temple (耕三寺) on Ikuchijima Island.

A Walk Through Ikuchijima, A Picturesque Island in Setouchi

Falling under the Onomichi (尾道) city jurisdiction, Ikuchijima Island (生口島) is geographically connected to the city by the Shimanami Kaido (しまなみ海道), a 60-kilometre cycling road bridging the Seto inland sea up to Shikoku. Visitors can reach the island either by bike or boat, and either will have fantastic views of the connecting islands. Before you go straight to Kosanji Temple, you may feel tempted to walk around the backstreets of Ikuchijima. Ikuchijima has an atmosphere of a remote island, but indeed, still a part of Hiroshima Prefecture (広島県).

On a sunny morning in February, I boarded a little boat from Mihara (三原市, Mihara-shi). I am not sure if it is due to the peaceful ambience, the colourful citrus fruit stalls (a local specialty), the soft light of winter sun, or all combined, but I immediately succumbed to Ikuchijima’s charms.

If you have the opportunity, I’d suggest putting aside some time in your itinerary to wander and get lost in those quiet backstreets. It is a beautiful way to immerse yourself in an authentic and less-visited area of Japan.

Kosanji Temple, An Homage From a Son to His Mother

The story of Kosanji Temple is not a common one. The temple and surrounding structures were founded in 1936 by a wealthy industrialist, Kanemoto Kosanji (who later changed his name to Kozo Kosanji.) When his mother passed away in 1934, he dedicated all his time and wealth to building a temple to pay tribute to her. This homage inspired him to abandon his working life to become a Buddhist monk. Talk about dedication!

For more than thirty years, he erected some impressive monuments modelled after his mother’s favourite temples. For example, the symbolic gate of Toshogu Shrine in Nikko or the Kyoto Imperial Palace were some of his inspirations. Additionally, the wealthy industrialist erected art galleries, a multi-storied pagoda, statues, and main hall on the Kosanji compound. There are around twenty buildings in total at Kosanji, and fifteen have been designated as Tangible Cultural Properties in Japan – an undeniable recognition of a son’s love for his mother.

If you’ve heard that Kosanji Temple is a spectacle full of wonder and surprise, then some credit must be given to the temple grounds’ layout. The layout of the temple grounds sits on several varying levels. Monuments are revealed one by one as visitors follow a path through the complex. It is hard to imagine standing in front of the temple entrance what impressive buildings lay ahead. The gorgeous Kosanji Temple gates are just an appetizer for what is to come!

After I bought my ticket and walked through the temple gates, I soon started exploring the Buddhist works of art displayed on the temple’s first level arcade. On this level, you can also visit Choseikaku Villa (長生閣), constructed in 1927 by Kosanji as a residence for his mother.

The second level rests under the shadow of the five-story Gojunoto Pagoda surrounded by two pavilions. I felt tiny in front of its grand scale. The remains of Kosanji’s mother lay under this structure, and the pagoda is appropriately known as The Tower of the Great Merciful Mother.

A few more steps and you will reach the imposing Koyomon Gate, inlaid with what looks like over a thousand tiny details. The famous Yōmeimon Gate of Nikko Toshogu Shrine (日光東照宮) inspired the gate design.

Just behind the gate is the majestic Main Hall. Here, the vegetation is lush and contrasts the bright colours of the hall.

Kannon, the Goddess of Mercy

The entire complex is full of life, calmness and beauty. Undoubtedly, this is one of the grandest gestures of love from a son to his mother that I’ve seen. The nearby 15-metre Kannon statue stands in as a mother figure, overseeing the temple grounds and visitors.

Into the Cave of a Thousand Buddhas and the Buddhist Hells

If you go to the right side of the main hall, you will discover an entrance that will lead you to an underground passage. Next, you will leave the brightness of the day and dive into an impressive 350-meter long cave into the Buddhist Hells.

The cave features gruesome artwork depicting tortures in a Buddhist Hell.
Though I was a little scared at first, seeing the collection of thousands of Buddha sculptures was fascinating.

After my descent into hell, I exited the tunnel and reached what became my favourite architectural work within Kosanji: its immaculate marble garden of Miraishin No Oka.

The Marble Garden of Miraishin No Oka

Made entirely from marble, the sculptor imported 3,000 tons from Italy and required more than fifteen years of work to complete. And the result is unreal. Though the garden does not have any religious significance, I’d recommend a visit to this impressive marble display. The skies were clear on the day I visited, so I was lucky to see the geometric sculptures standing out against a perfect blue sky.

It was tough to bring myself to leave that hypnotic scenery. To stay a little longer, I ordered a drink at the restaurant in the garden to sit at one of the marble tables.

Usually, I am more interested in visiting smaller temples and shrines that take me off the beaten track. So, I did not know what to expect visiting Kosanji Temple. My curiosity guided me, and in the end, was awed by my visit to Kosanji. What I’ve learned throughout my travels is that Japan is a country of contrasts. And Ikuchijima is a perfect example of this. The rural, unpretentious island life of Ikuchijima, paired with the extravagance of Kosanji temple, is what stood out the most for me. I found myself losing all sense of time while visiting this unique temple in Setouchi. Perhaps, Kosanji Temple will do the same for you.

The city of Onomichi in the Setouchi Region can easily be reached by train from Japan’s main cities. It takes about 4h from Tokyo, 2h from Kyoto, and a little less than one hour from Hiroshima.

From Onomichi, Ikuchijima Island and its Setoda Port can be accessed by boat from Onomichi Port (40 min) or Mihara Port (25 min). The island can also be reached by the Shimanami Kaido cycling road, making it is easy to reach by car or bike from Onomichi or Shikoku.