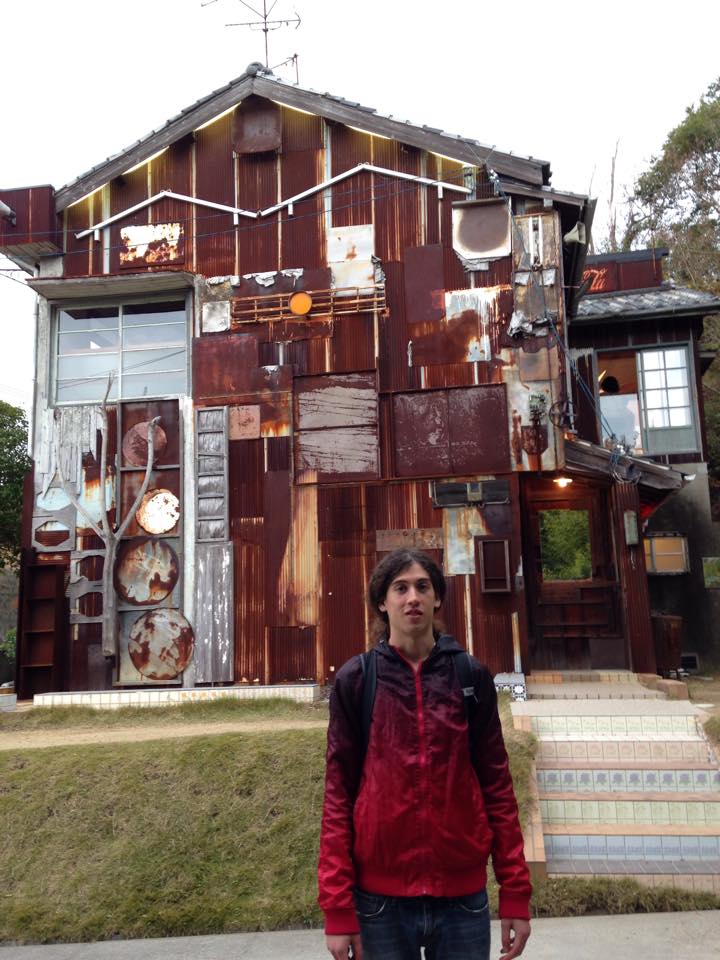 Naoshima island: A Coffee Quaffed and an Art House Hop

At Naoshima island’s town hall in Honmura village, the brake of our bicycles brought us to a bustling T-intersection.  Our eyes trailed the English style of a mini traveling away to the left.  It passed a house that I could imagine only belonged to an eccentric grandmother, perhaps also from England.  It was striking art and we had to strike our way over along the narrow corner of the road.

An “Art House Project” participant, the mismatch building was a nest of Americana. The building was “Haisha” house, an actual juxtaposition; the dictionary image. The side felt stolen from a dilapidated Midwest barn. The back was plastered with signboards of glorious Americana. 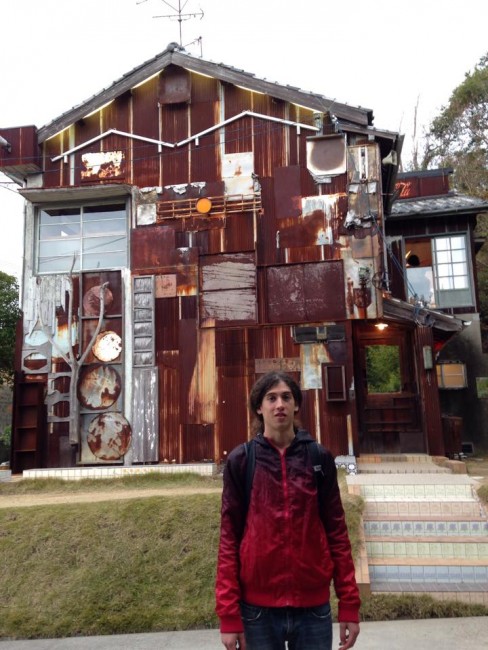 An island barn as it was, the house itself held spaces out of place. To enter, we had to pay two attendants – this building was a stop on a trail of artistic creations (Naoshima’s “Art House Project”) in the homey format. Entering, we had to take off our footwear; it was a Japanese house interior not to be wrecked by shoe scuffing. I remember a stark black and white to the interior, although some elements were cheeky pop art.  Although the interior is sparsely adorned, there is one guest of a notable stature.

We popped out of the building and coasted in the opposite direction into Honmura port’s village. Although our aesthetic palette had been dabble-dabbed, we needed to indulge in digestible art. We understood little of any uniquely Naoshima food. Along the road where pedestrians dawdled with doodled minds, we saw an Udon restaurant.  Slurping piping hot udon wasn’t the rest we needed. A little ways off was a sign promising soft-serve ice cream with its universal whip-coiffure. That wouldn’t warm our bellies from the Naoshima island fall.

Before the road was pinched between a hill and the sea, we left the road for a small alley.  Walking our bikes, the most notable smell was of fresh wooden construction.

When we emerged to a view looking across to neighboring Mukajima island and a group of water-wearied fisherman, we couldn’t have expected the unassuming appearance of a cafe in its patch out back behind the main road. 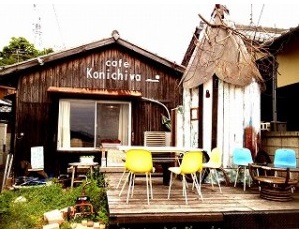 The cafe, Cafe Konichiwa, was a cozy spot, with an unpretentious front that seemed like a lake house in my home state of New Hampshire. It had a small yard and low plank wood platform with a slim sort of lean-to resting in characteristic Naoshima art. It seemed designed out of the Japanese sensibility to bend nature into works of art, dragged ashore onto Naoshima island.

We entered the cafe to a warm soundlessness, and uncertainly placed our shoes into the genkan (Japanese household area where shoes are placed). When a face peeped from behind a shelf shielding the kitchen from across a comfy corridor, all was needed was a smile to cross the silence. We were then ushered into a small lounge. 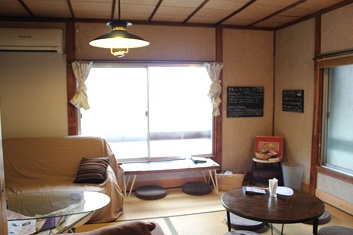 The cafe lounge contained low seats and tables. There were magazines on shelves for flitting through an idle day, but our bellies had been idle long enough. We began leafing through the sticker-tape notebook-menu tenderly crafted by the barista/chef/homeowner for our seriously needed sustenance.  Despite the hunger hustle, the room and cafe whole had this blanket of quiet. It was only peeped through by muffled comments between human and table legs.

The meal offerings were priced low as this hearth to the outside sea could be. But the assured warmth of the dishes and definite familial warmth of the cafe interior raised prices to match our rising spirits.  We each chose a warm drink and meal, content to spend a few yen more at this homey cafe in the midst of an art walk.

I remember the partition of meat sauce and rice like a hungry sea lapping up an island.  It was satisfying to dip spoonfuls of rice into the curry, then stopping to take a draft of my mug of cafe latte.  I could hardly draw my eyes away from the cafe’s food.  While the portion wasn’t small by Japanese standards (it was modest, as a Japanese cafe often is), my belly was big by Japanese standards.  It was time for desert, and so I saved my drink to give that balance of drink and dish.

It was a timeless while before we stood to exit the cafe.  Only towards the end of our deserts did other guests come to ingest, perhaps awakening us with the brisk of island outside. We paid a little over 1500 Yen each for the meal and were on our way to the next Naoshima curiosity to welcome us with whatever concrete or driftwood limb it might offer.

We returned to the main road by the alleyway which had led us to Cafe Konichiwa.  Inside where the road hugged around the sudden water, there squeezed up a hill.  The green and a pathway through the lower island brush whispered of concealed worlds.  We didn’t have to think twice about locking our bikes in the nearest bay away from the road and hobbling upwards.

At the top we found a clearing.  Trees still crowded a view of the sea, and a bench faced strangely inland the island at higher trees.  Unconcerned with art, we continued into a forest tunnel to fathom any lookouts to sea. 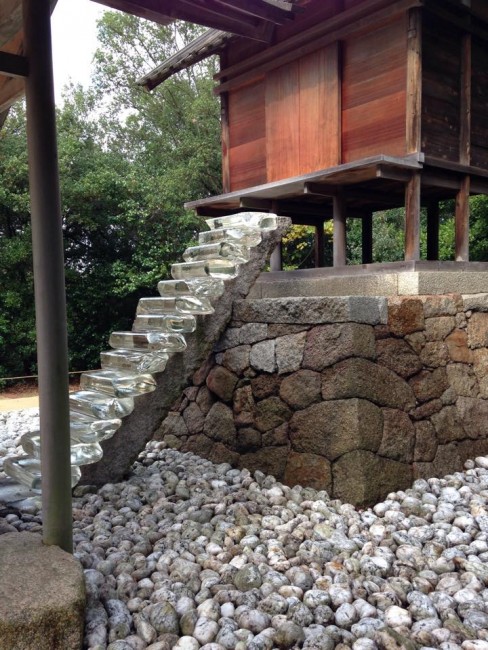 Peeking into the next level of forest, we found a Naoshima art house of a different sort.  To our side, partly shaded in canopy and partly by clouds, was a shrine on stilts – the recently redesigned Go’o shrine. Despite darkness overhead, the structure and it holy plot of land seemed light.  Placed evenly in the rectangular space were thousands of smooth white stones that held light like a secret blue lagoon.

Go’o shrine had a low fence, and we followed to a sandy patch from where the path snaked silently away. The shrine held an aura akin to its main island counterparts, but touched by the sea as the hill on which it stilted up from.  We set into the grounds as the shrine seemed to float.

English words drifted over the salty island air after a moment.  While I had entered some sort of reverie, an islander had found me. Ruddy-cheeked as a fisherman, the man had just as many stories to tell.  I was surprised by his command of the English language, as certain as a weathered fisherman of his catch.  He explained with apparent cheer the history of the shrine.

Set as we were upon the shrine grounds, we had set our minds on exploring the most of Naoshima in a single day. With perhaps a grain of guilt and a downwards head-tilt, saying “thank you” we tread back through the forest and off the hill for the cozy art village.  The Naoshima island cool was with us the entire way.

We wandered among small touring groups of visitors after unlocking our bikes and stepping into some back streets.  The Honmura neighborhood was nestled against the nape of the hill and comprised of many of the curious Naoshima Art House Project houses.  We happened upon Kadoya art house just ambling around.  Our rental bicycles didn’t belong amongst scuffing shoes, though.  It was time to speed away.

To Uno: From JR Okayama station, take the JR Seto-Ohashi line towards Kojima station. Change for JR Uno Line at Chayamachi station, and get off at Uno Station. 580 Yen one-way.