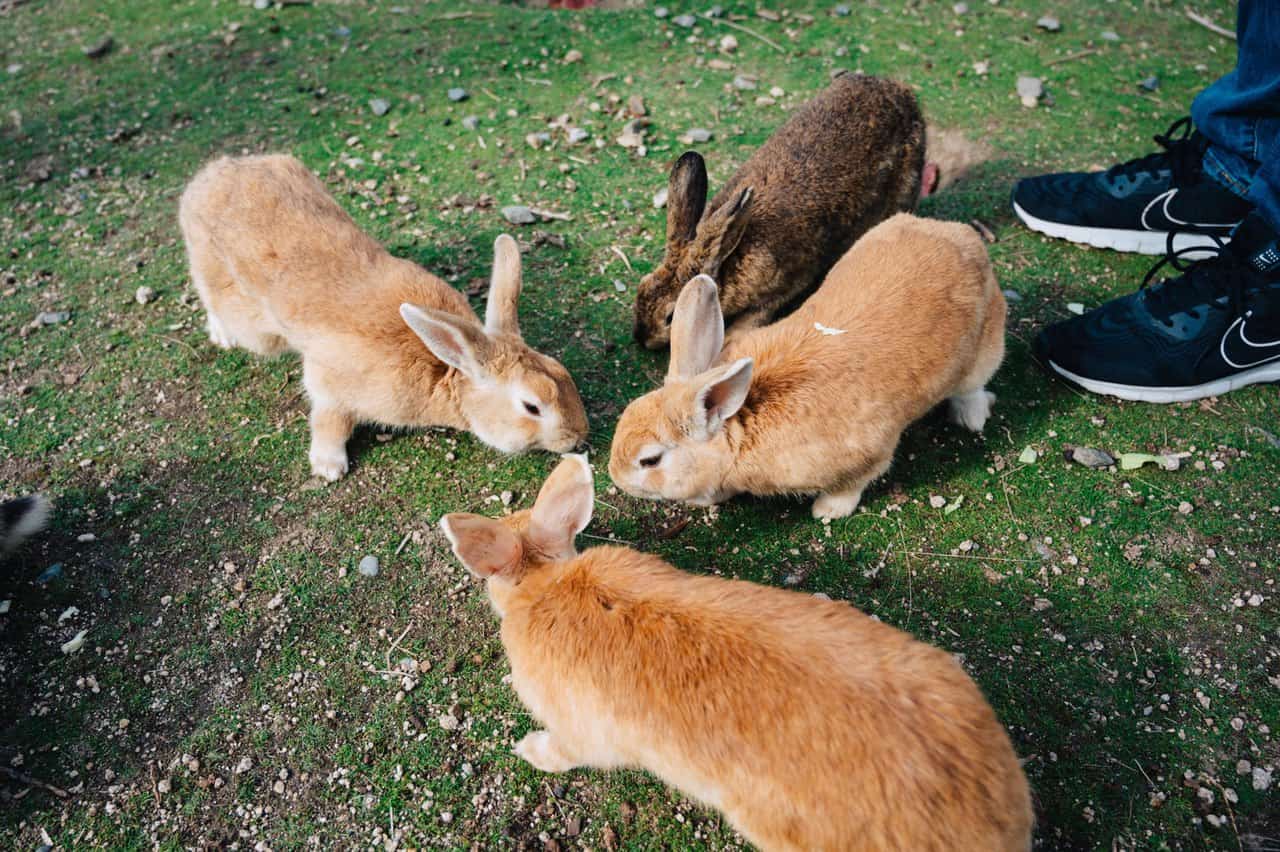 Rabbit Island: The Cutest Day Trip from Hiroshima on a Budget

If you’ve heard about Okunoshima, more widely known by its popular name of Rabbit Island (official website), you can thank YouTube. Before a 2014 YouTube video of a woman being “attacked” by a horde of friendly bunnies went viral, most visitors to Okunoshima were either elderly Japanese coming to enjoy the local onsen hot springs or school children on a field trip. Few foreign visitors would have ever been interested in coming to the island for reasons other than the hundreds of adorable rabbits who live here, mainly because the real history of the island is extremely dark.

Nobody knows precisely how the rabbits ended up here in the first place, but it was certainly a change of fortune for an island whose history is far from cute. For many years before and during World War 2, Okunoshima didn’t even exist on a map; it was a secret military test site where the Imperial Army was creating and testing poison gas to be used on Japan’s enemies. After the war, all the facilities were destroyed; however, the local government did not want this disgraceful piece of Japanese history to become forgotten or covered up. They created the Poison Gas Museum as a memorial to remind people what horrible things can be done to others in the name of war.

Yet somehow, around 40 years ago, rabbits were introduced to the island. It could have been a prank by a group of visiting school children or a distraction created by someone who wanted to make Okunoshima a happier place to visit. Whatever the reason, today about 800 to 1,000 rabbits live on the island without any natural predators. However, that doesn’t make Okunoshima a paradise for the rabbits. They are utterly reliant on humans for food and water, just like any other pets. And like the deer in Nara Park, sometimes the food they receive from visitors isn’t always the healthiest for them.

There is a delicate balance on Rabbit Island with regards to human interaction with the rabbits. On the one hand, visitors are not encouraged to feed the rabbits, and you cannot purchase rabbit food on the island. On the other hand, the rabbits are relying on humans for food, so there cannot be a ban on feeding them either. From my understanding, the best foods you can feed the rabbits would be the type of rabbit food you would purchase at a pet store, made mainly of alfalfa pellets. Feeding the rabbits any other kinds of food, including vegetables, would be unhealthy and could cause them to become sick. Also, take care when feeding the rabbits as in their excitement to greet you, they might accidentally bite your fingers.

To get to the island, you can take one of two types of ferries from Tadanoumi Port, one that accepts only passengers and the other, which can also carry motorized vehicles. It doesn’t matter which ferry you take; the cost is the same, so take the next departure. The 15-minute ferry ride back and forth on the Seto Inland Sea is a chance to take in the fantastic views of this beautiful part of Japan.

Arriving at the island and stepping off the ferry, you will be rushed by a group of rabbits like the Backstreet Boys by preteen girls in 1999. This is not because they think you are cute. It’s because they believe you have food. If you do not have food, their keen little noses will sniff you out, and they will move on, like preteen girls did to the Backstreet Boys in 2013.

To the right of the pier is the remains of the power station once used for the buildings supporting the poison gas research. But did you come here to see the ruins of a poison gas factory or cute little bunny rabbits? I will assume the latter, so let’s go left, toward the island’s hotel, Kyukamura Okunoshima.

Kyukamura is the only hotel on the island and allows you to spend the night on the island. Why would you want to do that, you might ask? Some people cannot get enough of the rabbits, and because rabbits are nocturnal, you can enjoy them even at night. But another great reason to stay over would be to enjoy the incredible scenery from the scenic viewpoints of the island. In fact, the landscapes here are the only thing that can rival spending time with the adorable bunnies. The sunset here can be breathtaking and the night view of the sea filled with islands under the stars, indescribable. Kyukamura is a fine, reasonably priced hotel with Japanese and Western-style rooms, a public onsen bath, and buffet breakfast and dinner included.

We weren’t spending the night, but we were hungry, so we decided to have lunch at Kyukamura’s restaurant, where they serve the local specialty of the island. Can you guess what it might be? Here’s a hint: it’s abundant in this area, and it comes prepared in a variety of ways, including fried!

The answer, of course, is octopus! Wait, what were you thinking anyway?

The waters of the Seto Inland Sea are generally very calm, but off the coast of Okunoshima, you will notice a few whirlpools forming in the still waters. These are the hunting grounds of octopus, and in turn, become the spots where local fishermen hunt them in the early hours of the morning. Fresh octopus is something you usually love or hate, but Kyukamura serves an octopus set lunch prepared in several ways, so perhaps you can find a dish that suits your taste. For me, it was fried – yummy!

After lunch, we returned to the ferry and headed back to the mainland. There was still one more place on my itinerary: an Edo-era neighborhood so well preserved, Japan’s superstars of pop, Arashi, recently filmed a travel commercial there!

Getting to Okunoshima (Rabbit Island)

Not only is it simple to get to Tadanoumi Port from Hiroshima by bus, if you purchase the Visit Hiroshima Tourist Pass, it is also free! Tadanoumi (Takehara) is one of the destinations covered by the Middle or Wide area pass. From the Hiroshima Bus Terminal, it takes about an hour and 45 minutes to reach Tadanoumi Port, where you will purchase a ferry ticket for the 15-minute ride over to Rabbit Island.