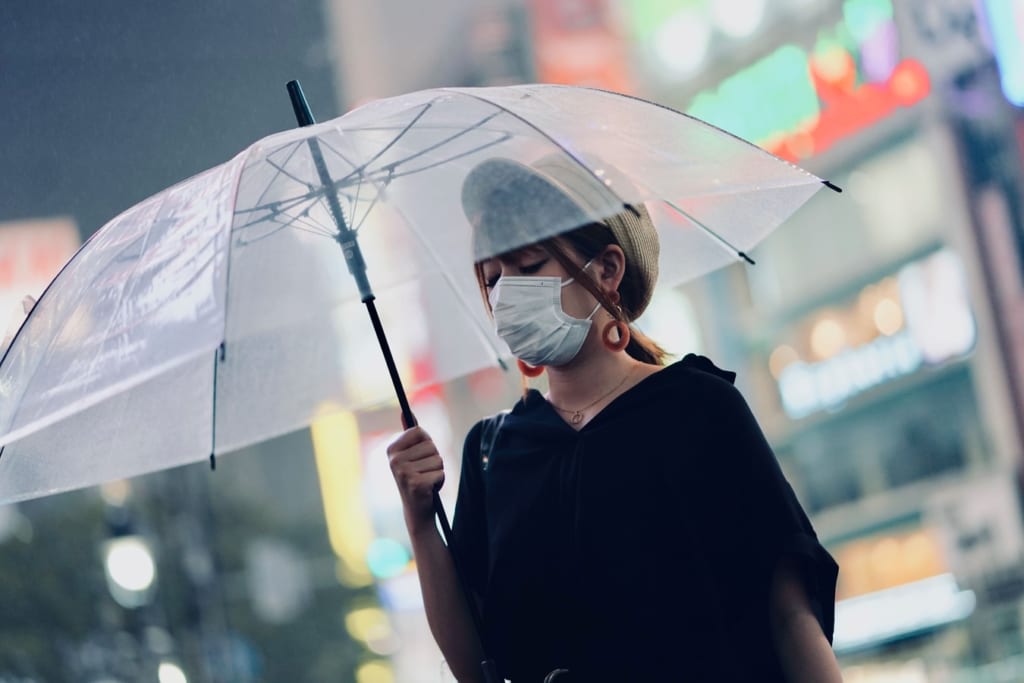 Why Do So Many Japanese People Wear Face Masks?

When I first arrived in Japan, like many people, I thought that Japanese people wore face masks because they were afraid of germs. So I was pretty surprised to discover there are many other reasons, and that is not even the main one! Face masks are a hallmark of Japanese hygiene that never ceases to intrigue foreigners, almost as much as Japanese toilets!

In Japan, people wear face masks mainly because of allergies

In Japan’s springtime, when flowers blossom with exploding beauty, more than 60 species of trees and other plants emit pollen at the same time, triggering an allergic reaction called kafunsho (花粉症). Many people claim that this hay fever epidemic began in 1994, but documents dating back to 1964 already mention these spring allergies as being a major problem! Symptoms include non-stop sneezing and itchy eyes. A face mask protects the wearer from inhaling pollen through the nose. This is the primary reason why Japanese people wear masks, as a high percentage of them suffer from hay fever.

Similarly, there are periods when winds blowing into Japan from China and Mongolia’s Gobi Desert carry over “yellow dust” or “Asian dust”. These sandstorms also affect other countries situated east of China. The big problem with these winds are the contaminants that end up the infamous dust. In addition to viruses and bacteria, the storm carries debris from soot, pesticides, fungus, sulfur, carbon monoxide, microplastics, and even heavy metals such as mercury and lead. Even if this phenomenon occurs rarely, wearing a face mask will protect you from irritation of the throat and eyes. And if you already suffer from respiratory problems, consider wearing a face mask as a no-brainer!

Wearing face masks in Japan is also a question of esthetics

After doing a little survey of my Japanese friends, I was surprised to learn that some women choose to wear a large face mask, simply because they aren’t wearing makeup! So it’s a way to hide your face when you don’t have time to powder your nose.

When you sneeze in Japan, don’t expect anyone to say “bless you” or anything else. It’s considered rude to blow your nose in public, and it’s not uncommon to hear people sniffling loudly for hours. These cultural differences really remind me that I’m on the other side of the world!

On the other hand, I find it interesting that it’s customary to wear a face mask when you’re sick to avoid contaminating your colleagues, friends, or family. Often times, a person is wearing a mask not to protect themselves from germs or viruses, but to keep from spreading them if they feel a cold coming on.

There are also public health advisories recommending that people gargle with water as soon as they get home, in order to kill any germs they might have inhaled outside before swallowing them. Take this medical advice with a grain of salt, but it certainly can’t hurt you if you want to try it yourself.

During the annual flu epidemic, I wore a face mask every time I went out into a public space and gargled as soon as I got back home. This discipline worked well for me. I recommend this technique for people living in other big cities. After all, millions of Japanese can’t be wrong.

Japanese have been wearing masks long before the COVID-19 pandemic

Perhaps the Japanese were better prepared for the COVID-19 pandemic because of their experience with another dangerous global pandemic, the Spanish Flu of the early 20th century. About 400,000 people in Japan died from the Spanish Flu, and hundreds of thousands more in Japan-colonized Korea and Taiwan.

As people became more knowledgeable about how the flu spread, educational materials were produced urging people to wear masks. For those who couldn’t afford to buy masks, instructions were printed in newspapers on how to make them. When the SARS panic gripped Asia nearly 80 years later, Japanese people were already conditioned to wearing masks and not a single fatality from SARS was recorded in Japan.

Once again, wearing a face mask in Japan is a common occurrence. Japanese people wear face masks in public for a variety of reasons, mainly because of seasonal hay fever, but also for various personal reasons, and from their history dealing with other flu-related pandemics.

If wearing a face-covering in public spaces has more recently caught on in the rest of the world since the spread of COVID-19, in Japan, wearing a face mask has simply become more of a daily routine.

Where to buy face masks in Japan

In Japan, you can buy face masks just about anywhere: pharmacies, supermarkets, convenience stores (7-Eleven, Lawson, Family Mart…) or even in bigger stores like Don Quijote. Basically, you should be able to find face masks in a range of styles just about anywhere. They’re sold in boxes of 5, 10, or more pieces. The price of a basic disposable face mask shouldn’t be much more than ¥80 per mask.

While the disposable surgical masks are most common in Japan, you can also find reusable, washable face masks made of fabric. The initial shortage of face masks at the beginning of the pandemic have made these all the more popular.

Many people have sewn handmade face masks for themselves and others, and several shops selling traditional fabric items have designed their own models of face masks made from fine Japanese fabrics, either handwoven or recycled, in cotton, linen or even silk, for around ¥500 to ¥1500. It’s a way to reconcile utility, esthetics, and support for small shops hit hard by the drop in tourism.

Large fashion clothing and accessory brands have also made their own face masks, such as Uniqlo, which added lightweight, breathable face masks to their AIRism summer collection on June 19, 2020. As Japan’s hot and humid summer began, they were immediate bestsellers. No doubt other brands will soon follow suit.

Original article by Dario Imaz published in Spanish on December 20th 2016, edited in August 2020 and translated by Cherise Fong.