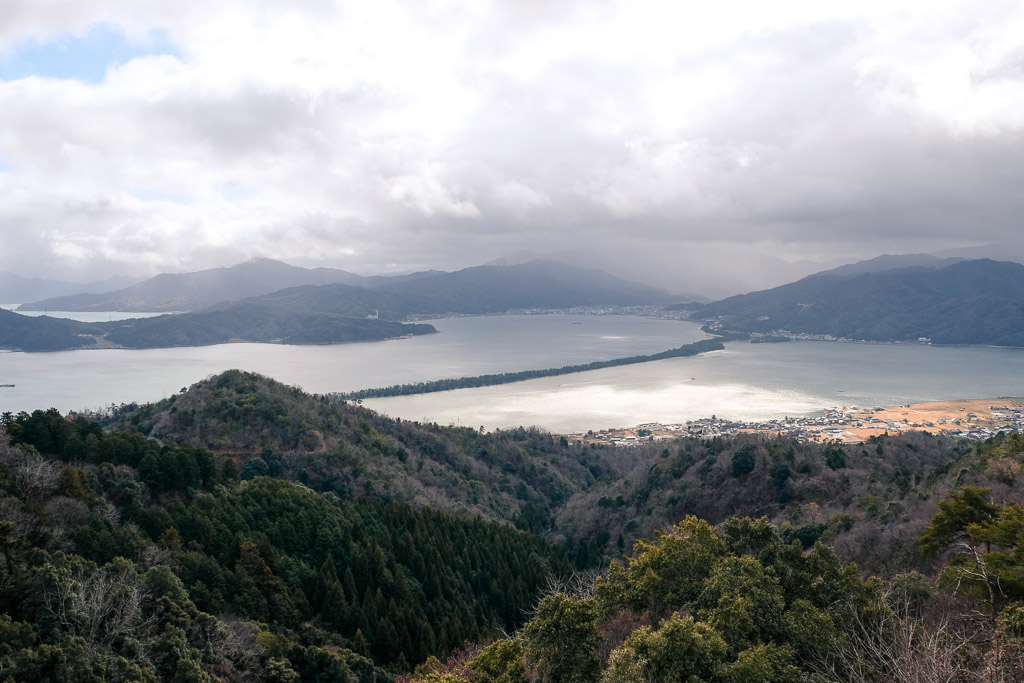 Amanohashidate: A Bridge to Heaven at One of the Three Views of Japan

Japan is a country of lists. Top five cities. Top ten shrines. Top 100 ramen joints… you get the picture. So it didn’t surprise me when I started researching the famous sight of Amanohashidate (天橋立) in northern Kyoto, that I learned about the Three Views of Japan (Nihon Sankei / 日本三景). Dubbed the “top three most scenic sights of Japan”, I had in fact, although unknowing of their famous status, visited two of the three spots already. With a visit to Matsushima islands of Miyagi over 15 years ago and the high-tide scenery of Itsukushima Shrine’s (厳島神社) Torii gate, I was about to complete the top three list of Japan’s most scenic sights.

Roughly translated as a “bridge to heaven”, Amanohashidate’s pine tree-covered sandbar stretches across the mouth of Miyazu bay. Visitors can walk or bike along the 3.6km catwalk. It’s one of the most popular activities in the area, so go early to avoid the crowds.

For a bird’s eye view of Amanohashidate, I took the Kasamatsu cable car up to Kasamatsu Park (傘松公園) observatory deck to get a better look at this celebrated sight and learn why it got its famous name in the first place.

To get to the cable car, I walked through the Motoise Kono Shrine (元伊勢籠神社). Once the most important shrine in northern Kyoto, it enshrined the Sun Goddess, Amaterasu-Ōmikami, before she finally made her home at Ise Shrine of Mie prefecture. As a result, the Kono Shrine adopted the name Motoise, which literally means “Origin of Ise”. Photographs are not allowed past the gate posts, though you’ll find many architectural similarities with its cousin in Ise. For example, ten katsuogi roof logs are placed along the roof ridgeline much like at Ise Shrine, and railings bear the suedama Shinto motif that only the two shrines are allowed to use.

The shrine’s cypress bark roof is impressively thick and heavy – like what I’d imagine a layer of fossilized dinosaur skin would look like. In a small garden across the shrine, a suikinkutsu (Japanese garden ornament) released a series of reverberating echoes as water droplets fell into an earthenware jar.

To reach the Kasamatsu cable car, I walked through the shrine grounds to the left and followed the pathway lined with shops selling souvenirs and roasting chestnuts. The cable car operates hourly at every 0/15/20/45 minutes and costs 680 yen for a round trip. You can also take a chair lift up to the observatory, though it was closed for the winter season when I visited.

A View of Amanohashidate from Kasamatsu Park

After a 5 minute ride up the hill, I arrived at Kasamatsu Park. It’s easy to see why this is an excellent spot to view one of the top three views of Japan. The main level of Kasamatsu park offers a spectacular vantage point of Amanohashidate, and the observatory platform is a popular place to get your picture taken. However, I had another objective for my visit: To privately participate in Amanohashidate’s longest traditions… upside down.

At Amanohashidate, the custom is to bend over and view the sight through your legs. As unusual as it sounds at first, there’s a good reason for this: By doing so, the land and sky switch places, and suddenly, there’s a bridge in the sky! Considering Amanohashidate’s unique meaning, it’s a fitting name. For the first time in my life, I got a glimpse of what a bridge to heaven might look like.

To get here, I climbed up an additional set of stairs to the “Matanozoki” viewpoint. Surprisingly, I had the place to myself, which allowed me ample time to pose in the Matanozoki style in privacy. The view extended beyond the main sight, with several landforms intersecting the Miyazu bay.

Next, I headed towards another Amanohashidate viewing point at Nariai-ji Temple (成相寺). As the 28th checkpoint on the Saikoku Kannon Pilgrimage route, many have come to visit the temple’s main object of worship, a carved statue of Kannon, the Goddess of Mercy. As an enlightened being who sacrificed a life of Nirvana to remain on earth, many have paid her a visit to wish for a beautiful spirit and compassion in life. Kannon’s clout is not only felt here, but at all thirty-three checkpoints of Saikoku Kannon Pilgrimage that are dedicated to the deity.

Deep inside the temple was an exquisite room of red carpet and the fragrance of thousands of incense lit over the years. A sea of golden tendrils and lanterns hung from the ceiling. In the center of the room stood the wooden carving of Kannon. To pay her a proper visit, you can ring the small bell hanging in the interior entrance, where a thin, colored rope connected the two. Undoubtedly meant as a way to connect visitors to Kannon, I pulled on the bell and thanked her for letting me visit. Photography is not allowed in the golden room, though the interior space outside is allowed.

Down the hill from the temple are generous walking grounds, a large pond, and a newly built 5-story pagoda. The observatory is located further up the hill, where you can get a shot of the pagoda and Miyazu bay. The observatory had a considerably elevated view of Amanohashidate as well as a 360-degree view of the surrounding area. The grounds are open throughout the year, though the seasonal transformation of autumn brings an array of red and yellow foliage that will make the landscape particularly vibrant and beautiful.

And with that, I completed my Three Views of Japan list! Whatever list that you’re looking to complete, Kyoto’s coastal wonders of Amanohashidate and nearby temples and shrines is a deserved visit no matter the season. The Amanohashidate tourism website also offers a lot of advice and tips if you plan to make the trip.

From Kyoto Station, take the JR San-in Main Line to Fukuchiyama Station. Transfer to Kyoto Tango Railway from Fukuchiyama and arrive at Amanohashidate Station in about 1 hour and 15 minutes.

From Osaka Station, take the JR Fukuchiyama Line to Fukuchiyama Station. Transfer from Fukuchiyama to Kyoto Tango Railway and arrive at Amanohashidate Station in about 2 hours.

To get to Nariai-ji Temple, catch the shuttle bus that departs from Kasamatsu park every 30 minutes. If you’re arriving with your own set of wheels, leave from Motoise Kono Shrine for a 10-minute drive, and pay the 500 yen parking fee as you enter the temple grounds.

If you’re in the area, Maizuru (舞鶴) Red Brick Park is an hour’s drive away, where you can take a tour through the old brick warehouses once used to store naval munitions. Walk through the buildings on your own, or take a guided tour, which will get you access to certain buildings otherwise closed to regular visitors.