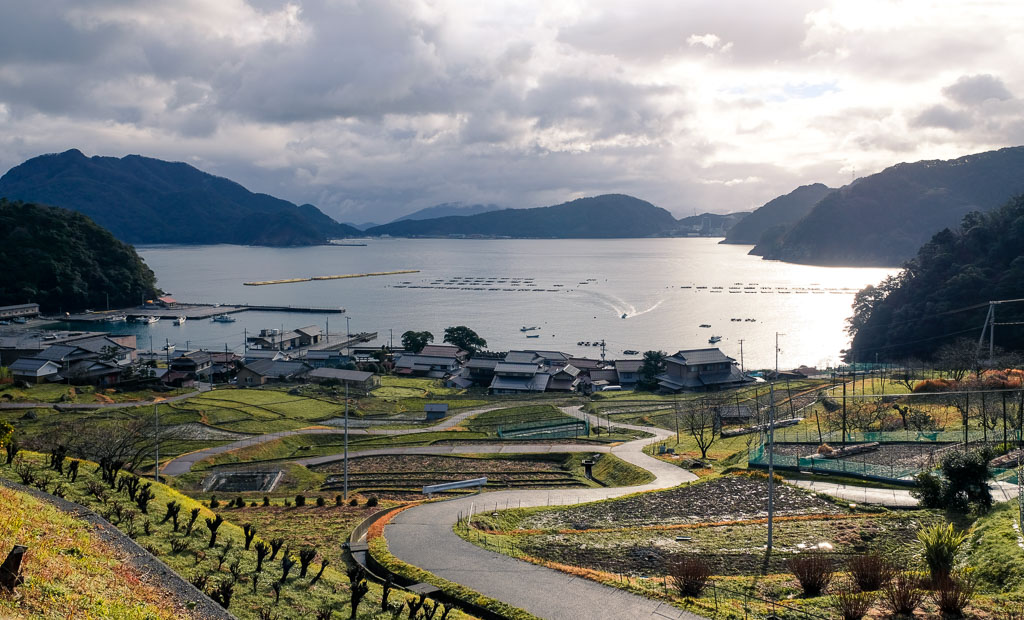 GAH! MONKEYS!!! It was quite the surprise to stumble into a group of wild monkeys at Hibiki Terraced Rice Fields, and I stood frozen in place as they scattered into the surrounding countryside. It marked a brief but lively interlude on my historic and natural journey through Fukui Prefecture’s (福井県) province of Wakasa containing Japan’s loveliest beaches.

The History of Obama City

Hugging the coast along the Sea of Japan (日本海), I started my day in Fukui’s Obama city. Obama’s close proximity to the rich cultural exchange that occurred centuries ago between Korea and China with the then-capital of Kyoto made it into a historically important trading post in its day. Today, the ancient center of trade in Obama reflects its intimate ties with the old capital, and alleyways still resemble some of Kyoto’s ancient roads lined with latticed wooden buildings.

Obama literally means “little beach”, and I’m greeted by twin bronze mermaids at the edge of the city by Mermaid Beach. There’s a free parking lot to the right, and I set off on foot to explore the old city.

To see the concentration of Kyoto’s ancient influence, I walked 10 minutes to the narrow alleyway of Sancho-machi (三丁町). As the historical chaya (teahouse) district, the road flourished with rest stops, traditional Japanese sweets shops and teahouses that employed the services of the geisha. Ryotei Harima is the last chaya teahouse that still engages the artistic and cultural services of the geisha to this day. The Benigara lattices and old teahouse buildings are beautifully preserved, and have been given the designation of an important traditional building conservation district of Japan.

Some of the old teahouses still retain their historic tradition as cafés, and their lights were lit up to welcome passing visitors in from the cold.

After my walk through Obama’s Sancho-machi district, I followed the coastline 50 minutes to the Hibiki Terraced Rice Fields (日引の棚田) of Takahama Town. As one of the 100 Terraced Rice Fields of Japan (日本の棚田百選), the impressive sight of over 200 rice paddies coupled with the enclosed Wakasa fishing port is a stunning example of a quintessential Japanese rural landscape. From the reflected waters of flooded paddies during the spring to the snow-covered terraced fields, the paddies undergo fantastic seasonal transformations that make it photogenic throughout the year. On this day, the sea had brought in a seemingly impregnable expanse of clouds. Even so, I decided to walk to the top of the fields in case I was lucky enough to catch a glimmer of the evening sunset.

While absorbed in my surroundings, I didn’t notice when I turned a corner and unexpectedly walked straight into a field of wild monkeys. Raiding the private gardens of Hibiki residents, I had interrupted a thieving in progress. I think I surprised those monkeys just as much as they surprised me, and they instantly raced for cover into the surrounding hills.

At this point, I laughed out loud. I thought about the two monkeys I had seen earlier by the side of the road, and something about their audacious public appearance made me think that they were up to no good. I guess I was right.

I walked up the rest of the pathway to the top of the fields where I waited for more monkeys and the evening sunset. Neither ended up revealing themselves that evening. Only the darkness of night and the whistling calls of monkeys in the nearby forest descended around me.

I walked back down the path through the fields and checked in at my accommodation at Shiotomi-sou (潮富荘) for the night. The 200-year-old ryokan (Japanese style inn) nestled between the Wakasa bay and terraced rice fields was once the important home to the village’s headman (庄屋). Now, the current owners are sisters who have been running the business for over 20 years, and has been in their family’s history for over 50 years.

I’m greeted by one of the sisters, who takes me up to my traditional tatami room for the night. I have a window with a view of the bay, a set of yukata (cotton kimono) and Japanese futon bed laid out on the tatami floor. After setting the time for my evening meal, I got dressed into my yukata and head to the public bath before dinner.

The baths are separated from the main building and can be reached through a passageway connecting the two. The women’s bath is a spacious pink tile tub with romanesque detailing, and I soak away the day’s cold chill from my body.

Back from my bath and in my room, I received a phone call from my host telling me that dinner is ready. On the first floor, a private room where a kaiseki style (traditional multi-course Japanese meal) dinner has been laid out. From November to March you can enjoy the specialty of this ryokan, seasonal fugu blowfish or the crab course.

Mackerel is a particularly proud speciality of the Wakasa area, and can be eaten in several different ways: fresh, grilled or pickled. Sabano Heshiko (mackerel pickled in brine and fermented rice bran) was invented by the Wakasa people so that the fish could be eaten all throughout the year even when the fish was out of season. In fact, the mackerel is so famous that it even has its own ancient path named after it. Called “Mackerel Road” or Sabakaido, it was used as a transporting route to bring the delicacy to the old city of Kyoto from Obama city over thirteen centuries ago.

A small serving of Sabano Heshiko is included in my meal, and its tangy and sharp salty taste goes perfectly with a side of hot rice.

In the morning, the clouds had parted and it was looking like much better weather for more exploration. Shiotomi-sou’s breakfast was already prepared and laid out on the table when I came down for my scheduled morning meal.

Before leaving, it was impossible for me not to take advantage of the better weather, and I hiked up back to the hilltop to take my last picture of Hibiki’s terraced rice fields in all its glory. I noticed monkeys lingering by the forest edge, but they stayed safely away as I took my pictures. I’m sure they would be back down long after I’m gone, on their next mischievous adventure in Hibiki’s picturesque fishing town.

The Wakasa area is also famed for its gorgeously pristine beaches and national parks. Wakasa Wada beach is a 30-minute drive from Obama city and one of the most gorgeous beaches near Kyoto. Learn more about the area on Voyapon.

If you’re interested in exploring the city of Obama further, the Wakasa Obama website has a list of activities, events, and accommodations to complete your visit. Zen Life has more on the Takahama area if you’re looking for your ideal beaching experience, and the Wakasa Bay website has an expansive list of things to do in the area if you’re planning on extending your trip.

Getting to Obama City

From Kyoto Station, you can use JR & Bus to Obama City. Take the JR Kosei Line from Kyoto Station to Omiimazu Station. From there, take the West Japan JR Bus / Wakae Line to Obama Station. About 2 hours and 20 minutes.

From Osaka, take the limited express Thunderbird from Shin-Osaka Station to Tsuruga Station. Transfer to Obama line and get to Obama station. About 2 hours and 30 minutes.

From Kyoto to Takahama: About 1.5 hours from Kyoto Station to Higashi-Maizuru Station by limited express Maizuru. From there, transfer to a local train and arrive at Wakasa Takahama Station in about 20 minutes.

From Osaka to Takahama: It takes about 30 minutes from Osaka Station to Kyoto Station by new rapid train. About 1.5 hours from Kyoto Station to Higashi-Maizuru Station by limited express Maizuru. From there, transfer to a local train and arrive at Wakasa Takahama Station in about 20 minutes.

To get to Hibiki Terraced Rice Fields, it’s a 25-minute drive from Oi-takahama IC on the Maizuru Wakasa Expressway.